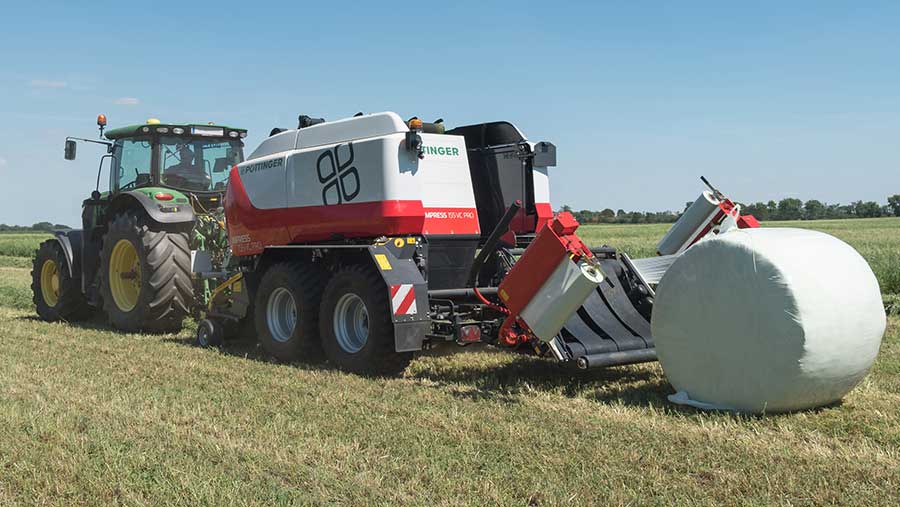 The first Farmers Weekly round balers guide reflects the generous choice of machines and features available to stock producers and growers needing to bale forage and straw.

Indeed, the choice of balers making round bales of a fixed diameter or variable diameter, including those that can wrap bales at the same time, has grown in recent months.

Austrian manufacturer Pöttinger has joined the fold with its Impress machines featuring an unusual “up and over” intake rotor and most recently added wrapping versions of the fixed and variable chamber Pro-specification models.

Agco’s expanded Fendt and Massey Ferguson lines include wrapping balers for the first time now that the former Lely Welger range and factory has been fully absorbed.

The Lely Welger brand and its familiar red and white colours will cease to be produced from March 2020. This notice period is giving dealers plenty of time to pin down an alternative forage products supplier.

Meanwhile, New Holland has streamlined its round baler-wrapper offering in the UK by dropping the variable bale size Roll-Baler 135 Ultra combination to leave only the fixed chamber Roll-Baler 125 Combi with this capability.

The hydraulic cylinders that close the opening section of the 16-roller chamber and hold it closed during bale formation are now located horizontally at the sides to allow increased density pressure while reducing the strain imposed on tailgate and ram bearing structures.

Isobus control capability is an increasingly common feature among the higher-specification machines, although Kuhn recently introduced non-isobus versions of its VB 3160 and VB 3190 variable chamber models to broaden their appeal to more potential users.

In contrast, the top-spec FB 3135 Automate fixed chamber baler and baler wrappers can be operated almost entirely under automatic control for knife cleaning and tailgate operation to reduce the user’s workload.