There was no shortage of bale handling kit to whet the appetite of livestock farmers at Lamma show.

New products included a budget handler from Turkish maker Basak, a Bobcat skid-steer fitted with mini tracks and new feeding and bedding equipment from the likes of McHale, Spread-a-bale and Tanco. 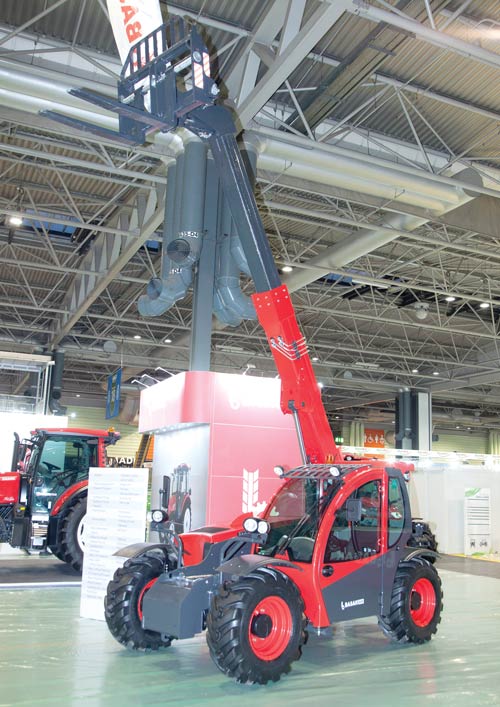 The absence of some of the farm machinery market’s biggest names thrust many less established brands into the Lamma limelight.

These included Turkish outfit Basak, which was showing off its range of tractors and a new-to-the-UK telehandler.

Priced at just £49,000, the BTH740 loader will undercut most of its competition on price.

It will lift a maximum of 4t and can reach to 6.35m, putting it against some of JCB and Manitou’s best-selling handlers.

Like many Turkish-built machines, it runs a Perkins-sourced engine with 4.5-litre capacity and 100hp.

This powers a hydrostatic transmission with a top speed of 40kph.

The cab looks to have most mod-cons. It hangs relatively close to the ground, so there’s no step up, and the door is a single-frame arrangement with a sideways sliding window. 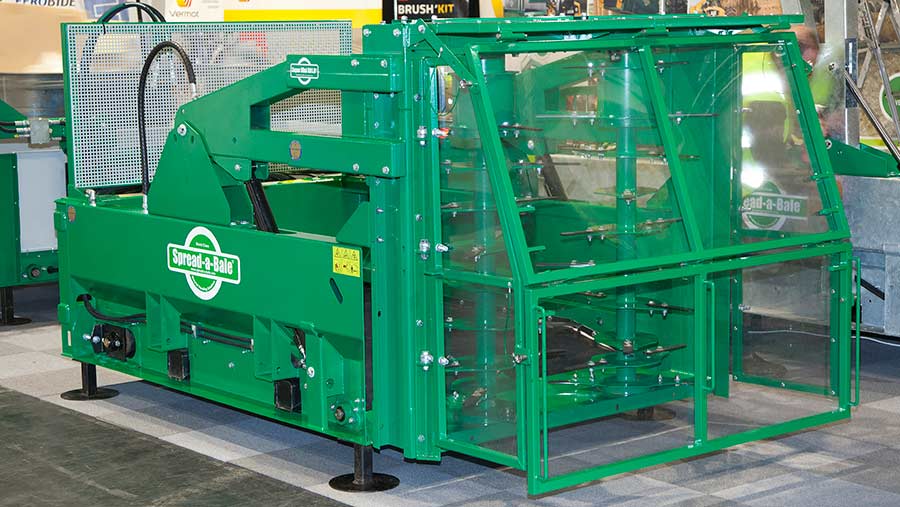 Stock farmers struggling to deal with densely packed round bales might like the look of Spread-a-Bale’s new compact, high-powered, loader-mounted spreader.

The RB1.8 is designed to handle round bales up to 6ft in diameter and has the option of a turbo manifold to increase spreading gusto.

Twin vertical spreading rotors are capable of flinging straw distances of up to 7m and there’s the option of adding the so-called Feed-a-Bale deflector for directing forage into troughs, mixer wagons or along fence lines.

In its standard spec, the machine requires a hydraulic flow of 55 litres/min, going up to 70 litres/min for the turbo manifold option.

The spreader can be front- or side-mounted and requires a loader with at least 2t lift capacity. 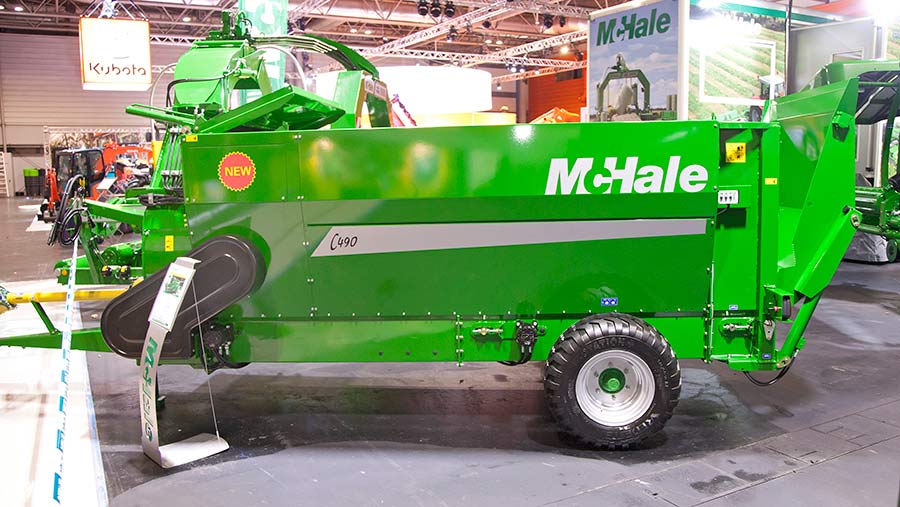 McHale has extended its range of silage feeder and straw blowers to include a trailed machine that can handle up to three 5ft bales.

This gives the C490 a total capacity of 6.85cu m, making it well suited to large buildings or for those that need to bed down or feed a long distance from their main holding.

Like all of McHale’s feeding and bedding machines, the C490 has a twin-speed gearbox, which allows the operator to adjust the speed from 280rpm for feeding silage or hay, up to 540rpm for straw bedding.

At maximum power, the 1.57m, six-paddle flywheel will blow straw 18m to the right-hand side and 13m to the left.

The chute is also able to articulate 300deg, allowing material to be flung into hard-to-access corners.

It is kept well fed by a hydraulically driven chain-and-slat floor conveyor, the speed of which can be adjusted via a dial on the control box in the tractor cab.

The feed rotor is equipped with 56 blades mounted on seven discs and has its own hydraulic drive, separate to the flywheel (straw blowing turbine).

This apparently reduces the amount of power required to start the machine.

Thanks to the curved design of the tailgate, it’s also capable of loading its own bales and has a holding area, where wrap and net can be removed.

All of the machine’s functions are handled by the firm’s own C4 Expert Control Console, which includes a joystick controller for the chute. 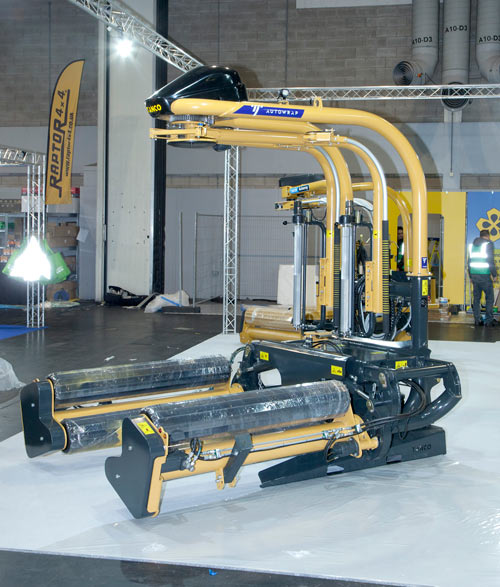 Irish bale wrapping specialist Tanco was displaying a new Q-series mounted square and round bale wrapper range based on the current 1500 series.

The two- and three-arm wrappers have a 200mm longer roller than the 1540-EH machines, which allows them to accommodate longer bales.

In fact, Tanco claims that they can wrap every bale on the market, from 120x70cm squares to 1.7m diameter rounds, and output is a maximum of 80 bales/hour.

Stand-out features include variable speed control for smoother wrapping, auto-load (allowing continuous wrapping) and telescopic cut, which stretches the wrap until it forms a single strand. 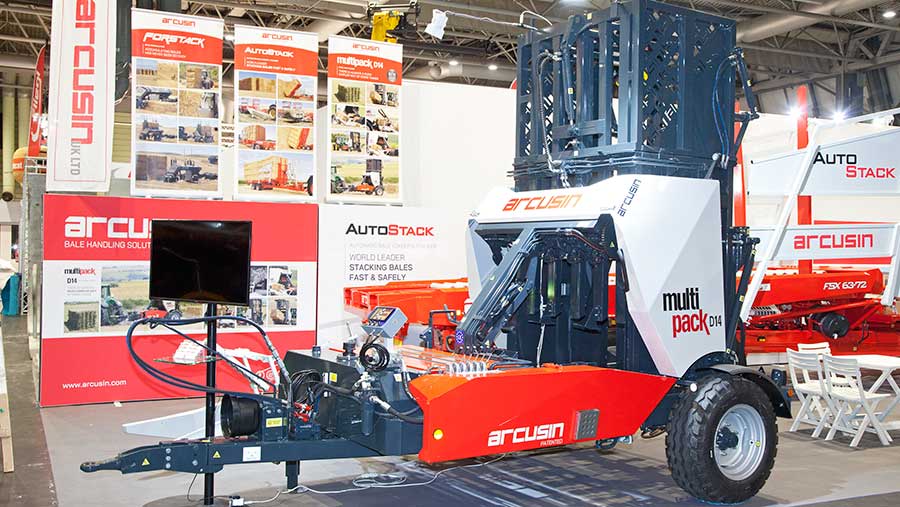 Arcusin was showing a new version of its Multipack small bale packing machine, designed to further streamline the lengthy process of gathering up square bales.

The Multipack system has been in production for some 25 years and the new D14 follows on from the C14+, with the most obvious change being the bale pick-up arm relocated to the right-hand side of the machine from the left.

This means operators can now mount the Multipack’s cab terminal on the same side as the tractor’s controls to make it easier to use while keeping an eye on the pick-up.

Other notable improvements include easier collection of bales at awkward angles thanks to a new soft entry chain system and extra clearance between the tractor and pick-up when folded for transport. 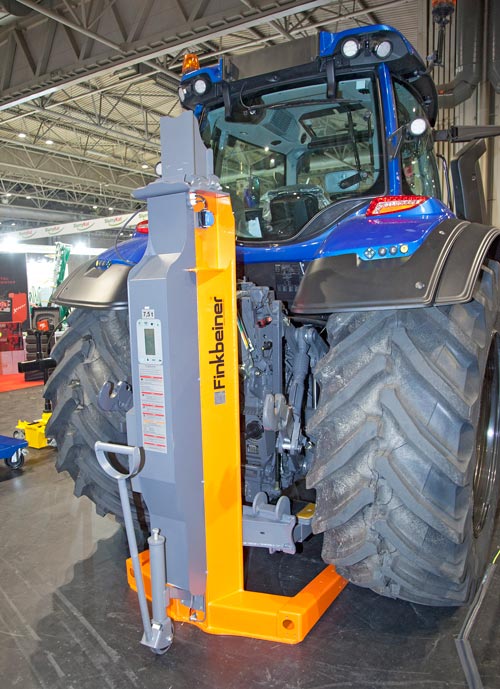 The Liftmaster stand had some nifty lifting towers to help stay safe when regularly swapping tractor wheels, including the German-made Finkbeiner 907 mobile units.

These are positioned at the front and rear of the tractor and offer a lifting capacity of 15t (7.5t each), which should be adequate for most machines.

This includes sprayers, although cab overhangs and spraying gear setups on some models can limit lift

They are controlled remotely and run on 80Ah deep-cycle rechargeable batteries.

These offer 20 full-load cycles before charging; handily, this can take place when in use and takes 30mins from a 230v supply.

List price for two columns is £10,997, plus the cost of adaptors for lifting different machines. 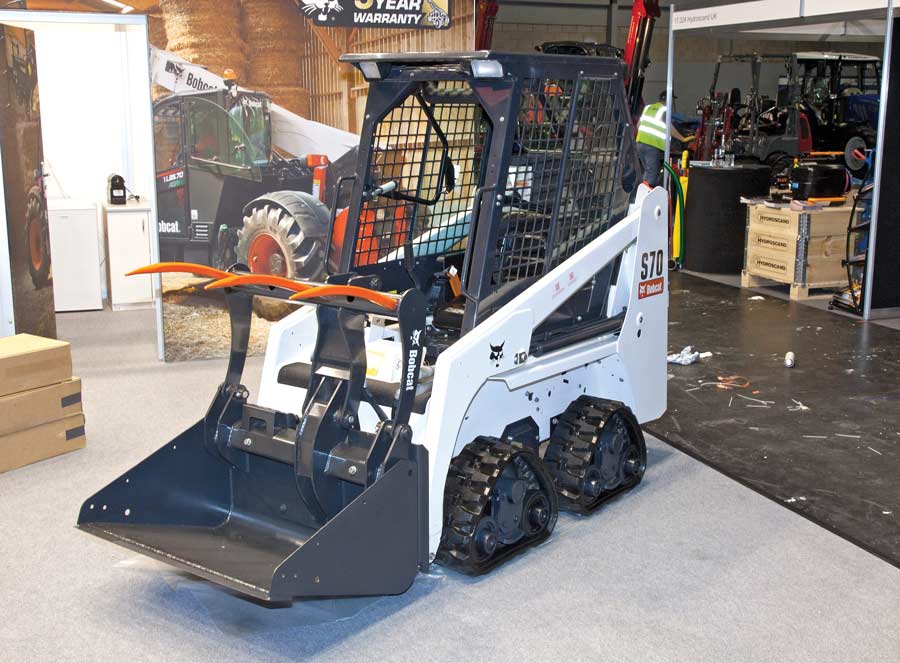 Alongside its top-of-the-range TL43.80 telehander, Bobcat gave a UK debut to a four-track concept of its popular T450 skid-steer machine.

The S70 is a bolt-on/bolt-off design so the machine can still be used with conventional wheels if needed.

There are four miniature triangular tracks on each corner to reduce ground compaction and improve stability on wet surfaces by offering three times less pressure when compared to wheels.

Attachments such as trenchers, augers, graders and soil conditioners could all benefit from having tracks rather than wheels, and Bobcat claims that compact track loaders offer about 25% more lifting capacity compared to their wheeled siblings.

Bobcat is after customer feedback on the concept to assess the potential for commercial production.