If you are in the market for a used combination round baler/wrapper, then it’s a fairly safe bet that McHale’s Fusion will be the only one on your shopping list.

When it was launched in 2003, the original Fusion set the standard for other makers to follow – and in the 13 years since then it has managed to secure well over 90% of the market. 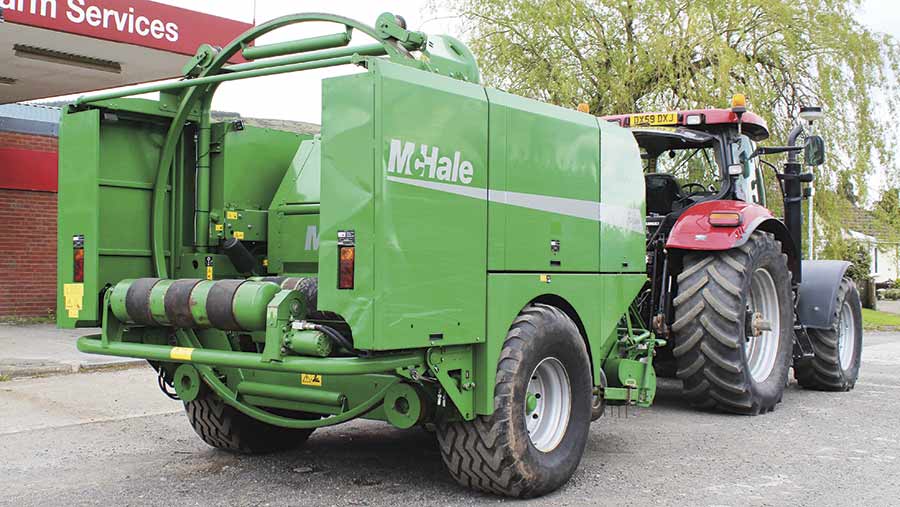 But will such a complicated-looking machine be a bag of trouble once the bale count starts climbing?That means they are now a fairly attractive proposition for small, one-man-band operators who are sick of having to trundle back round the field with a separate wrapper.

See also: How to get your arable machinery costs under control

To find out, we visited Powys-based McHale dealer Western Farm Services, who gave us the lowdown on a tidy, 11-year-old, first-generation Fusion with 38,000 bales on the counter.

That might seem a high bale count to some, but apparently there are plenty of Fusions still going strong with well over double that number of bales through them.

The pickup is one of the biggest indicators of the baler’s past life. The bars are made out of pretty tough stuff, so if they are staved in it has probably seen some abuse. Pickup tines are also usually good for 20,000 bales, so if there are lots missing then the pickup wheels have probably been set too low and it has been doubling up as a cultivator.

Cam bearings also tend to need changing after about 10,000 bales. They are difficult to see, but if you run the pickup up and it sounds graunchy, they are most likely your culprit.

Bearings tend to last pretty well on the Fusion, but the one on the rotor drive sprocket on the right-hand side of the machine is usually one of the first to go, particularly if the baler has been chopping. It’s worth putting a bar to this to see if there is any play. 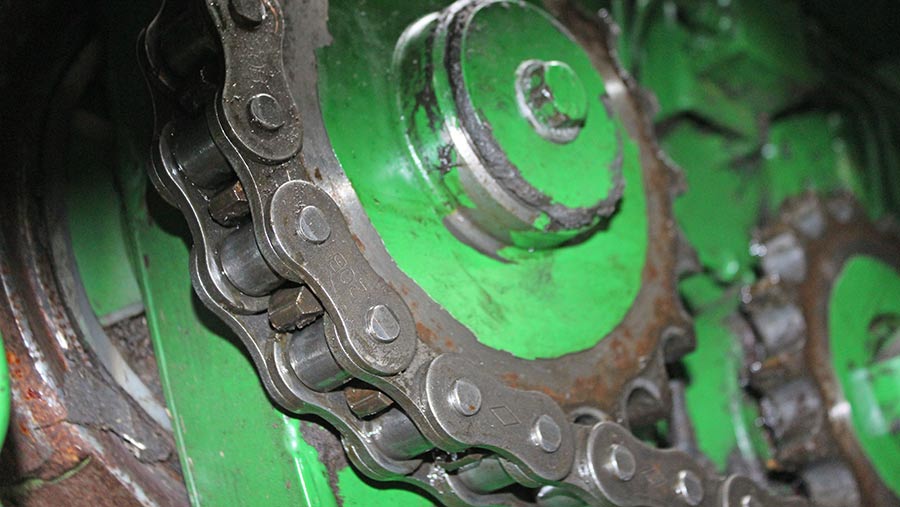 Once balers start climbing up the bale count, play can develop in the roller bearings. Failures are fairly rare, but once they get sloppy they will need replacing. All are twin-race roller bearings and they cost £65 each. The ones on the lower front roller are usually the first to go, so check there first. 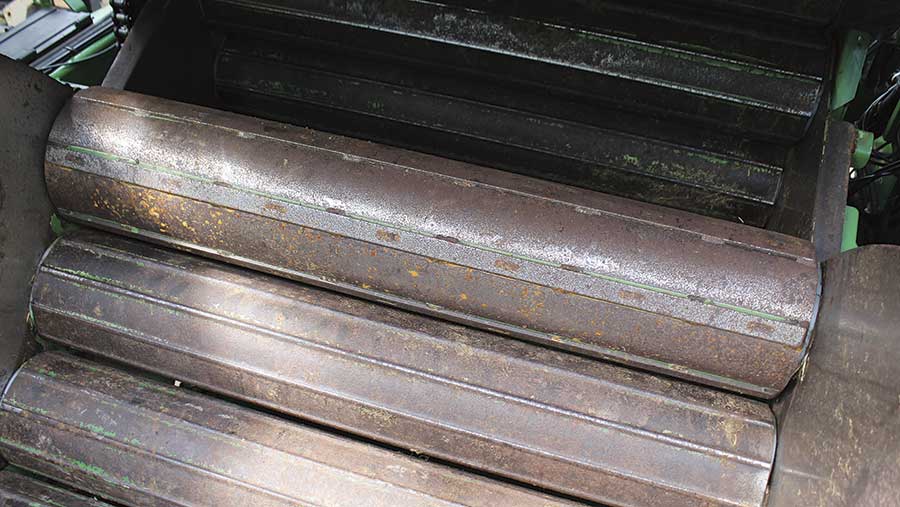 It has also been known for heavily worked balers to snap the end stubs off the long-shaft rollers. If this happens, you will need a new roller assembly at a cost of £835 and it will take about four hours to fit. 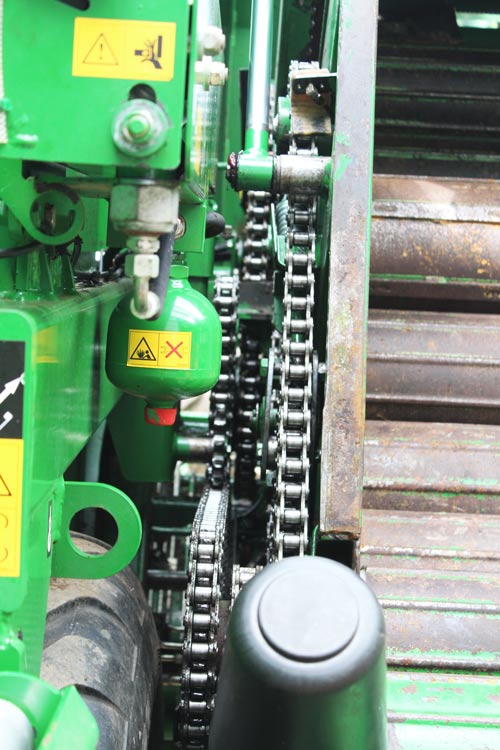 McHale recommends swapping the chains every 20,000 bales, but if they have been kept well-lubricated and at the correct tension then they could do as many as 30,000. Ask when they were last changed and factor in £1,000 for a full set if they look like they need doing.

Chain wear is generally pretty even around the machine, so if one is shot it’s best to bite the bullet and do the whole lot. A dealer will factor in about half a day to do the job. 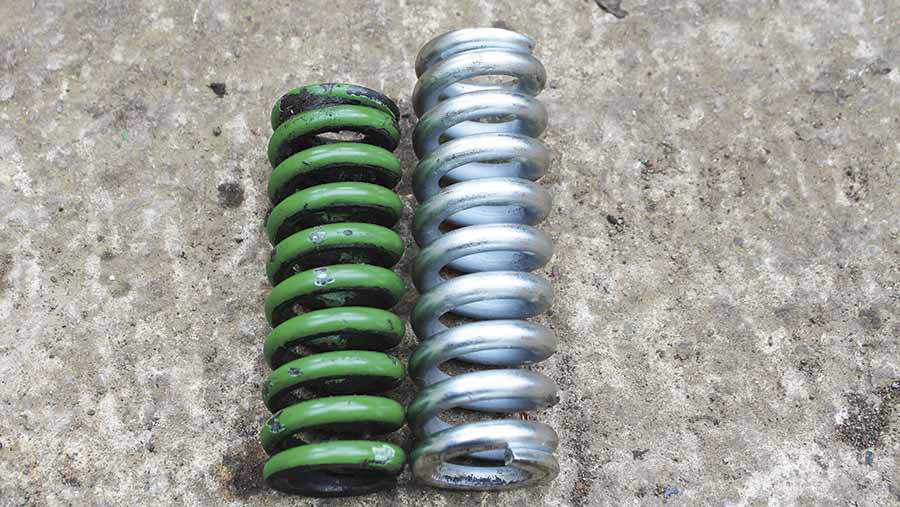 Tired chain tensioner springs are another one to watch out for. If the chains look slack and there’s no adjustment left on the springs, then you will need to get a new set. There are four in total and they cost £22 each. 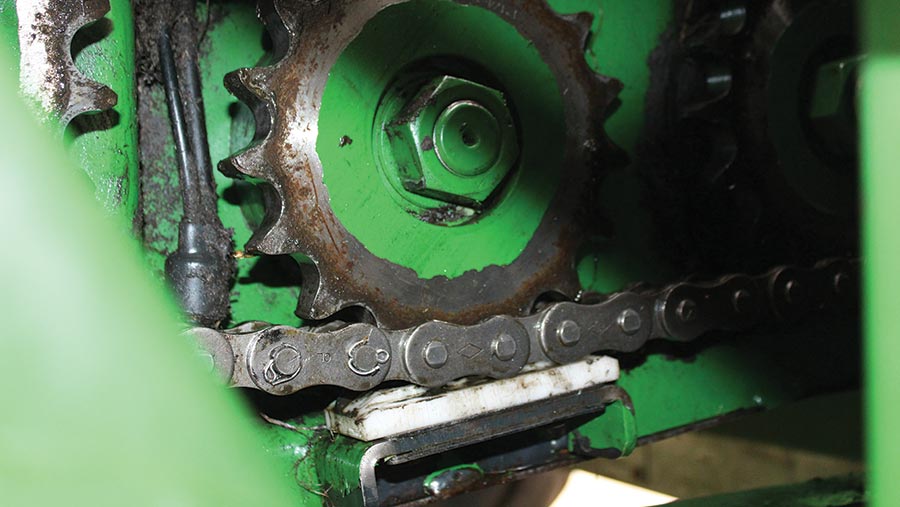 It’s also worth checking there’s some wear left in the nylon chain guides. The one that usually goes first is on the left-hand side under the drive sprocket for one of the low front rollers. If it’s left too long, it will cause the chain to slip on the sprocket, which quickly starts taking the edge off the teeth.

The Fusion comes with a 23-knife chopper unit, but it’s unlikely you will find a full set in a second-hand machine. A lot of farmers won’t chop at all – and of those that do, most will probably run a half set. If you’re planning to use the knives, drop the floor and see how much life is left in them. 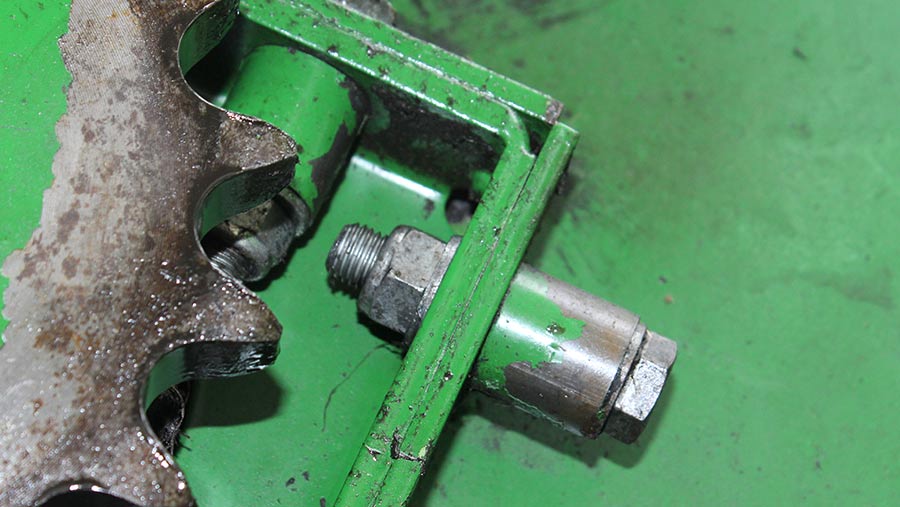 The McHale is built to last and you rarely need to put a welder to one. However, if the bolts for the door hinge rattle loose then you can get some stress fractures around the pivot point. If the bolts are loose then it’s worth inspecting the hinge more closely. 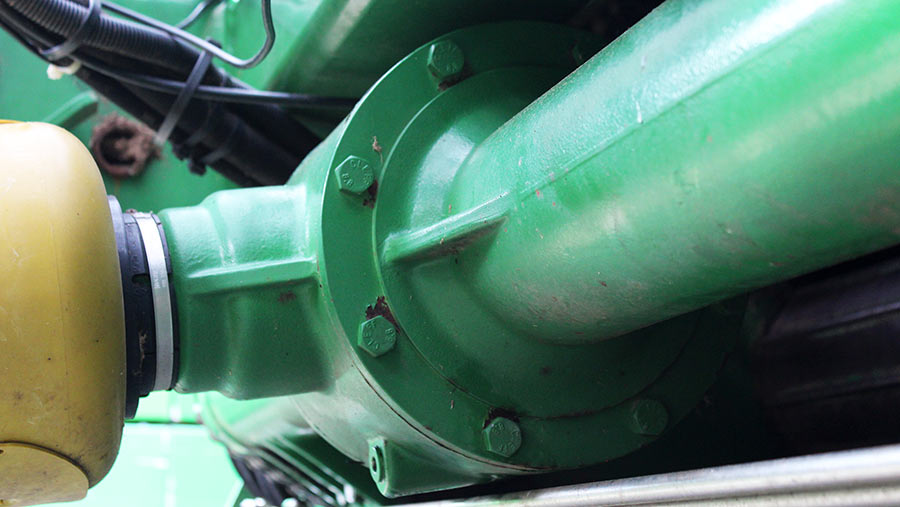 Oil in the front split-drive gearbox should be changed once a season, but because the filler is obscured by the front step it often gets ignored. Ask when it was last done – and if you want to change it yourself, you will need to refill with EP90 oil. Removing the front step makes the job a lot easier. 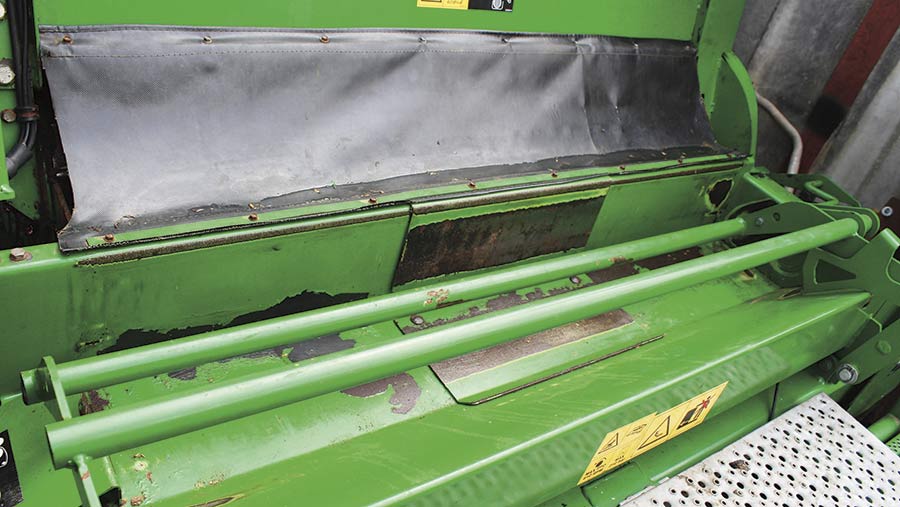 Check the bottom of the net box for signs of rust as this will snag the net and stop it feeding into the chamber properly. It’s also worth checking the abrasive surface on the net metering wheel. When this wears it will slip and the net will keep firing into the chamber. 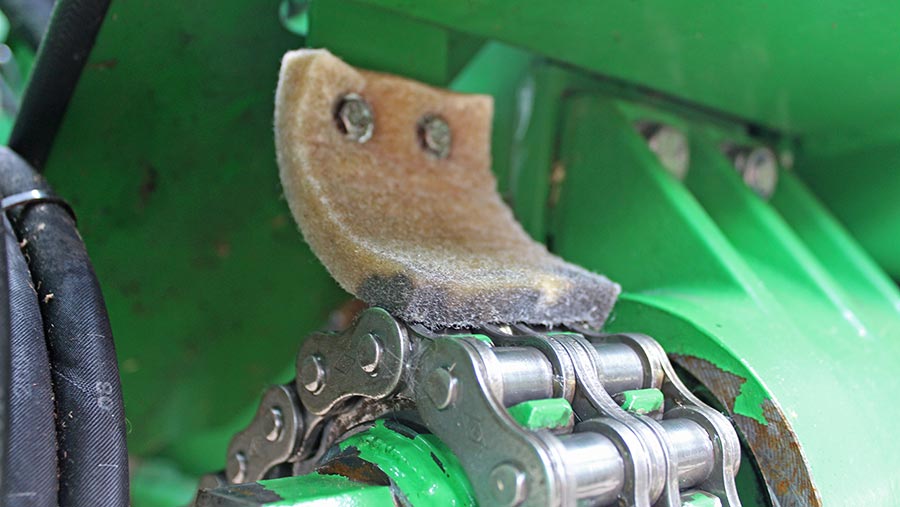 Providing the oiler is run on proper chain oil it shouldn’t give any problems. However, some owners have been known to run them on waste sump oil, which quickly gums the whole system up. Have a look in the tank to make sure it’s full of clean, fresh oil. Oiler wicks will also want replacing at the same time as the chains.

The auto greaser pump has also been known to fail and replacements cost £306. 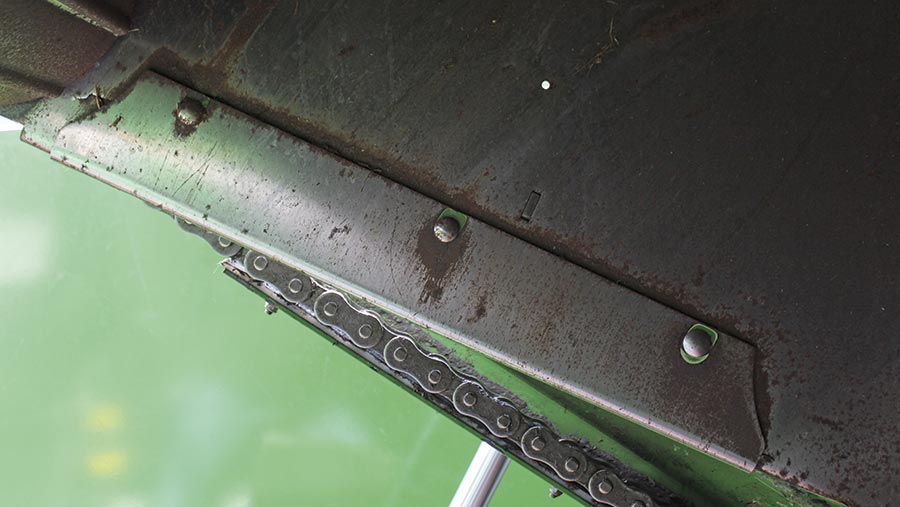 Some well-used Fusion balers have now racked up more than 100,000 bales and after that amount of work there’s a good chance the back of the chamber will have worn paper-thin. There’s no need to worry though – McHale offers a bolt-in kit that will have it back as good as new (well, nearly). 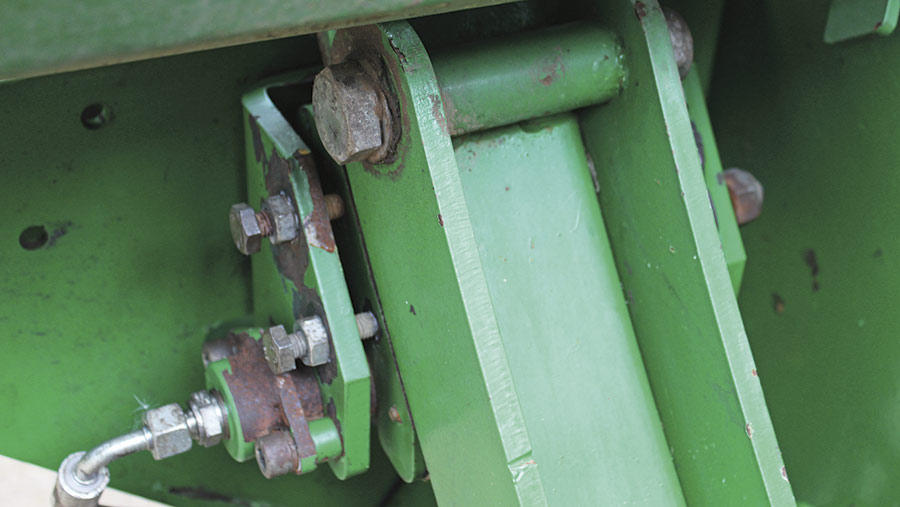 The brake on the wrapping ring is one to look out for. While parked up with the brake on, shove your boot against the ring and try to push it round. If it moves, the brake will either need to be adjusted, have new pads fitted or be freed up. 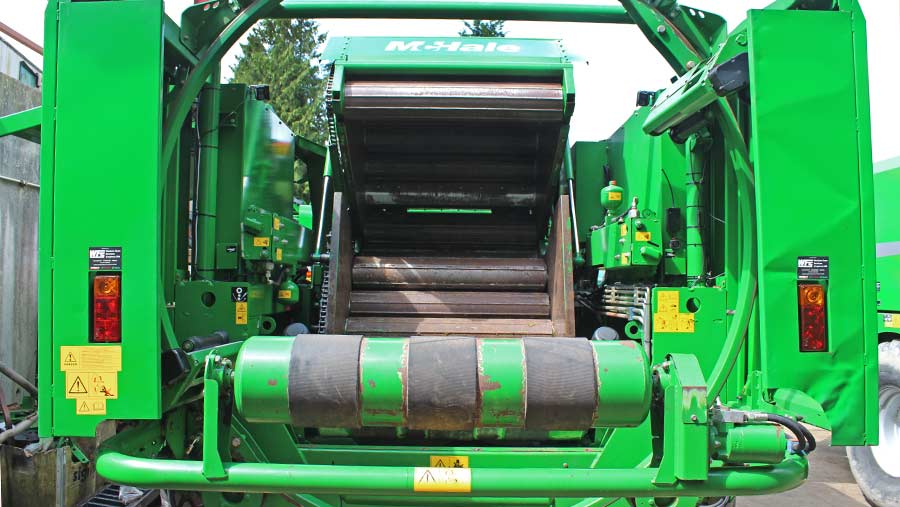 Occasionally wrapping rings get knocked off on rough ground, so eye up the framework and brackets to make sure nothing is bent. The top support brackets are usually the ones that get bent. 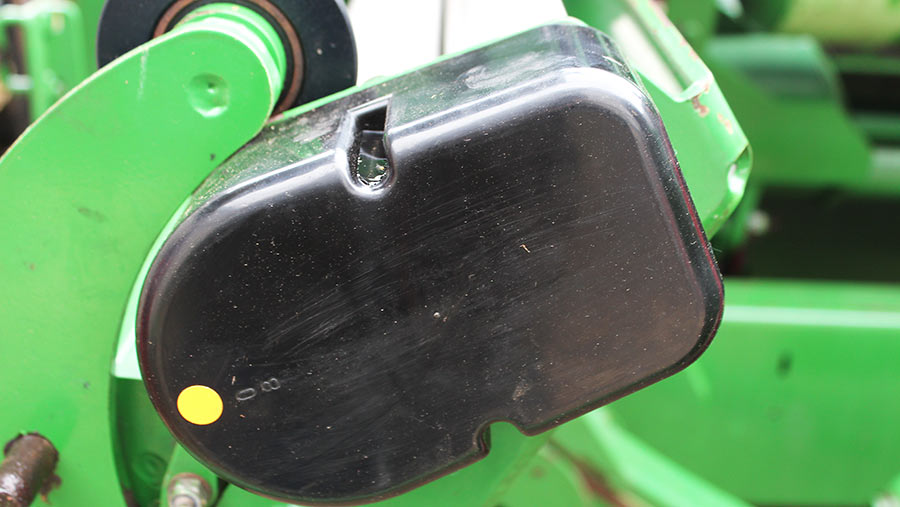 The twin wrapping dispensers are usually fairly reliable, but the batteries and end-caps do need replacing periodically. These should be changed at the same time and cost £240 per pair. 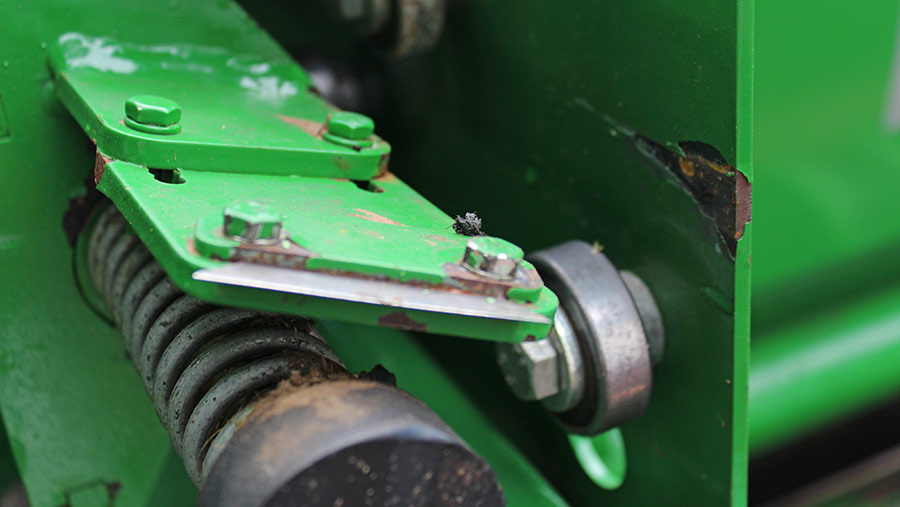 The Stanley knife blade in the wrap cutter unit should be changed once a season. There’s just one bolt to undo to get into the unit and it’s a 10-minute job. 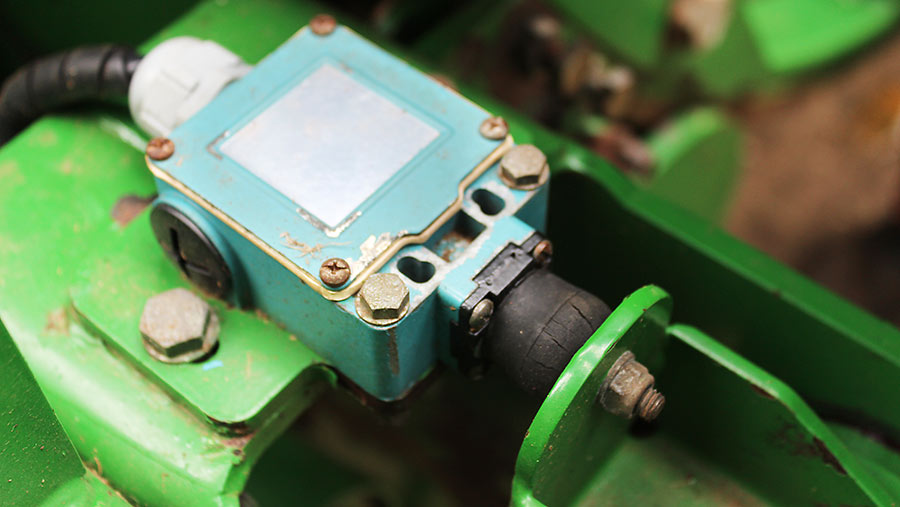 The Fusion relies on a series of sensors to make sure it stays in time and you don’t get problems such as completed bales being ejected into a full wrapper unit. If the machine has been overwintered outside, then the water can get into these and cause them to stick. Usually, they can be freed up with a bit of WD40, but this will need wiping off thoroughly as dust will stick and make them worse.

What’s this one worth?

The 2005 machine featured in this article with 38,000 bales on the counter has now been sold for £17,950. It had been fully serviced by Western Farm Services and had had a complete set of new chains installed.