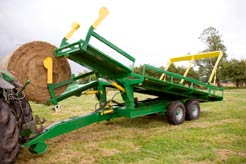 Eighteen years after it first came on to the UK market, the Rhoco Engineeringself-loading bale trailer is back. This time it has some new features and a heavier build.

According to Storwood, Yorkshire, designer James Rhodes, 25 of the units were sold over the 10 years it was made. Production stopped eight years ago because of falling orders prompted by what seemed at the time like an unstoppable shift from round to big square bales. The family (who are arable and livestock farmers, too) also wanted to concentrate on their diversification into making steel staircases, balustrades, gates and railings.

But, with 1600 round balers sold in 2008 compared with 270 big square balers, the round bale principle is holdings its own. So Rhoco has revamped the machine and put it back on the market.

The basic system is the same. Two cradles, one on each side, lift up the bales and allow them to roll on to the main holding area. There’s room for 12 4ft bales, 10 5ft bales or eight 6ft bales and a steering drawbar boosts manoeuvrability.

There’s now joystock control for the main functions, too, plus heavier 10t tandem axles, flotation tyres and a heavier build throughout. Hydraulic brakes are standard, but air-brakes can be specified.

Since the Rhoco machine is designed to run in the same direction as the tramlines, there’s none of the bounce involved with machines that have to cross tramlines, says Mr Rhodes. So high forward speeds can be kept up.

Also, the machine hardly needs to stop to pick up each bale, so an experienced user is able to take his foot off the throttle momentarily while the grab rolls into the bale and then put his foot down again to speed to the next one.