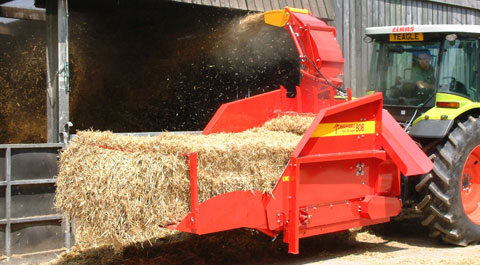 Tom Teagle took over the 122ha (300-acre) family farm in Cornwall from his father in the early 1930s when he was just 19. He enjoyed building and repairing machines and by 1938 he was making carts to sell.

An innovative potato planter that placed fertiliser near the tubers came next, and he also designed a novel tractor-mounted steerage hoe.

Because of the rapid growth of the machinery business a separate company called W T Teagle (Machinery) was formed in 1943. Tom’s inventive ideas produced a steady stream of products including a tractor-powered loader for stacking loose hay and, in 1949, the first of a long series of Teagle fertiliser spreaders.

A surprising development in 1952 was a 50cc two-stroke petrol engine used to power a hedge trimmer, lawn mower and the Cycle Motor power pack for bicycles.

Two of the most successful 1980s developments were the Toucan forage wagon in 1980 and in 1983 the company’s tractor-mounted small bale shredder was the forerunner of the market-leading Tomahawk big bale shredders that top the Teagle sales charts.

While some well-known farm machinery companies have shrunk or disappeared, the Teagle business continues to grow. Tom died in the early 1990s, but the family still owns a controlling interest in the company and provides most of the directors. Moreover, Teagle machines are still built within yards of the original farmhouse.

As well as the top-selling Tomahawk shred-and-bed machines and silage feeders, the current product line-up covers a wide range of pasture toppers and other mowers including engine-powered and amenity machines.

Super-Ted swath conditioners are next on the popularity list, along with single and twin-rotor fertiliser spreaders. Rear delivery manure spreaders and flail mowers are imported.

Marketing director Geoff Osborne is optimistic about the future. The company is benefiting from efficiency gains following investment in improved production facilities, he says, and there are opportunities to expand their currently small range of amenity equipment.

They also plan to boost their export sales, currently contributing 30% per cent of turnover, and the shrinking value of the pound against other currencies offers an ideal opportunity, he says.

Owned by: Controlling interest held by the Teagle family