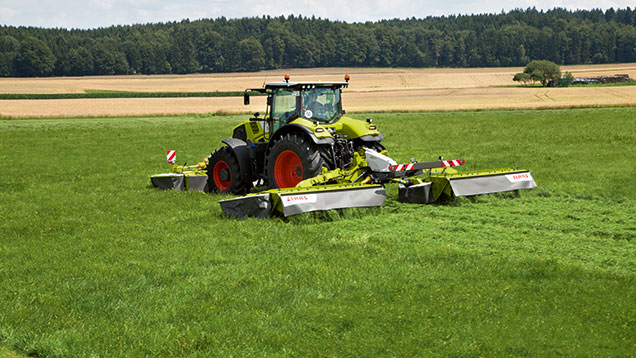 There are 19 models, ranging from a 2.6m mounted mower up to an all-singing-and-dancing, Isobus-compatible, 9.1m triple.

The Max Cut mower bed has a wave-shaped leading edge, which means the cutting discs can be mounted as close to the front of the bed as possible, says the company.

There’s greater overlap between the blades, too, giving a bigger cutting area and more flow through the mower.

The drivetrain of the new mower is permanently lubricated, maintenance free and designed so in lighter crops it can be run at 850rpm instead of 1,000rpm.

Each mowing disc is mounted using a safety link module, says the company.

This will shear in a collision and is apparently easy to replace.

The 19 models have been divided into five variants: Trend, Contour, Business, Austoswather and Duo. Simpler Trend mower units are operated using the tractor spool valves without any electric control terminal, but if required can be incorporated into the tractor’s headland management.

Contour series mowers are operated using the tractor’s spool valves, but the pre-selection is made using a new control panel or an Isobus control terminal.

Business and Duo mower units use load sensing hydraulics and are controlled using either the new Operator terminal or the Isobus-compatible Communicator II terminal, which allows mower functions to be assigned to the function buttons on the tractor’s multi-function control lever.

Seven Disco triple mower and mower conditioners are now available, ranging from the 9.1m wide Disco 9400 C Duo to the Disco 8500 Trend, which has a working width of 8.1m. This is a new entry level model with low-power requirement and is said to be simple to operate. The range also includes  the Disco 8500 (8.1m) and the Disco 9200 (8.9m).

Nine new mounted or trailed Contour straight mower or mower conditioner versions are available, ranging from the 2.8m Disco 2800 up to the 3.8m-wide Disco 4000.

In the trailed mower range two new models are available, the Disco 3200 TC and the TC AS which has a conveyor system for swath grouping

All the new Contour models retain the hydro-pneumatic Active Float suspension, which enables the ground pressure on the mower unit to be changed from the driver’s seat when mowing. They are also protected by a mechanical break back system which moves the mower unit backwards and up, so that it is raised above the obstacle.