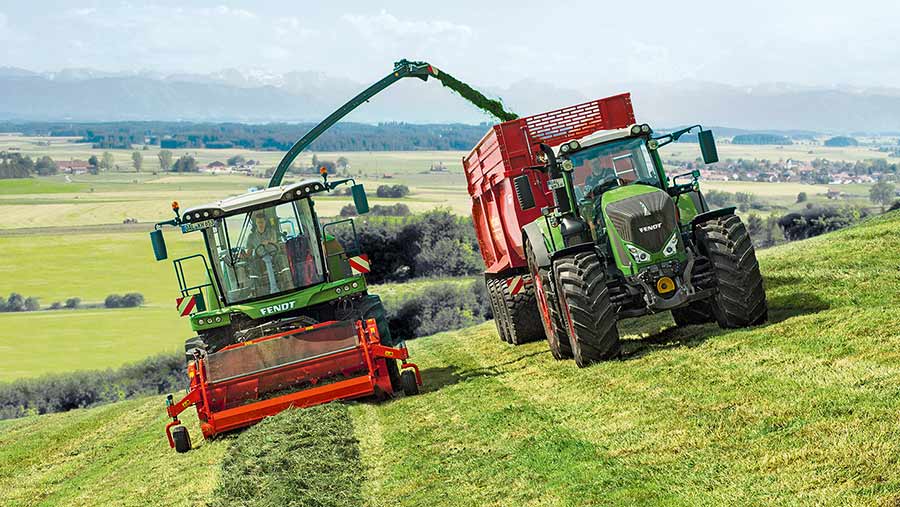 Fendt’s baby Katana 65 has been rebranded to Katana 650 and gained an extra 25 ponies from the same MTU six-cylinder engine, so it now tops out at 650hp.

Other changes include two new roller conditioners that extend the cut length on the harvesters up to 30mm, and the pick-up has an enlarged processing area with a 300mm roll diameter.

Operators had noted that in wet, heavy grass crops, the spout would restrict the crop flow and slow the machine down.

Fendt has therefore increased the surface area of the spout so the machine can now apparently offer 21% more throughput while slashing fuel use by an impressive-sounding 12%.

For the first time, the company has also installed a sharpening tool on the knife unit that continuously adjusts and restores the whetstone during grinding.

This should see the knives sharpened more evenly and they should last a bit longer, too.

There was no word on whether the Katana 85 will be in line for a similar power tweak in the future, and Fendt wouldn’t be drawn on rumours that it could be ditched altogether.

Offered only in a 3.6m working width, it has a choice of roller or tine conditioner and can be run on its own, or in combination with rear-mounted units.

The pull-type machine connects to the tractor’s link arms, rather than the A-frame linkage, and a clever 3D ground adjustment system can alter the downward pressure and has -6deg to +15deg of movement to follow contours.

When travelling over wet ground, the TurboLift system alters the downforce on the move to avoid nose-diving into the soil that risks causing forage contamination.

When Fendt bought Lely in 2017, it was pretty selective about the parts of the business that were to be included in the package. In the case of the tedders, it chose to purchase the intellectual rights of the Lotus machines, but not the Dutch factory where they were made.

A couple of years later, we have finally seen the Lotus tedders in the colours of Fendt.

There are three models available, with the smallest a mounted 770 (7.7m wide) that has six tine arms per rotor.

Key features include rotor speeds of 400rpm and 450rpm, which the company believes will minimise the risk of crop damage.

All models are fitted with Fendt performance tines that are more flexible than conventional versions – apparently the dragging position means the outer tine is always travelling faster than the inner tine, which helps to adjust to ground conditions.

Along with this, the tine position allows for faster working speeds, which the company claims can achieve up to 15% higher area output than tedders with traditional tines. The drive shafts have double cross-joints that are maintenance free.