All the big names were out in force at the Grassland & Muck event in Warwickshire, where gangs of butterfly mowers, high-capacity rakes and big foragers made easy work of the grass crop.

In this round-up, we’ll be looking at the newest grass harvesting kit to strut its stuff at Stoneleigh, including McHale’s triple mower outfit, Kverneland’s 15m wide rake, Holaras’ super-heavy-duty hay bob and a debutant on the UK grassland scene – Slovenian manufacturer SIP. 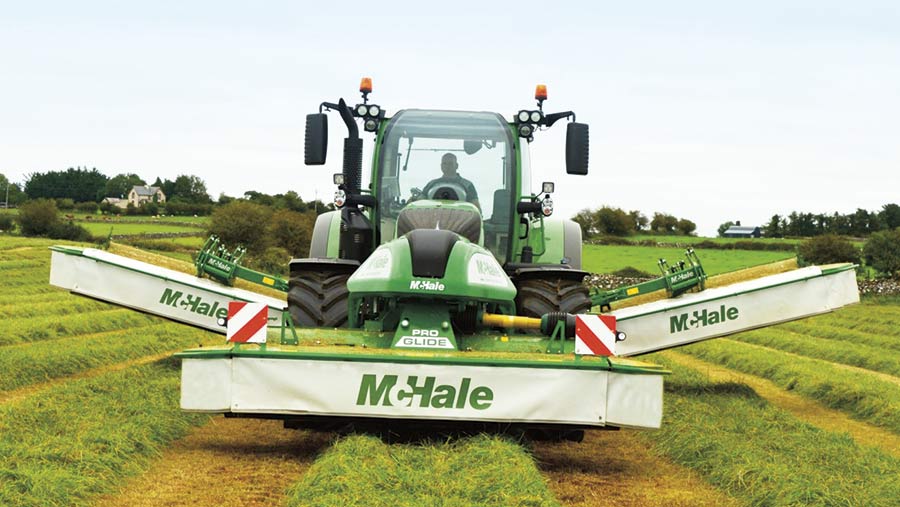 Triple mowers were making light work of the thick crops across the 76ha site, including McHale’s B9000 butterfly set-up.

Standout details of the mowers include a smart suspension system, which offers up to 50cm vertical travel and a bed tilt of 17deg. A sprung compensator should help maintain ground pressure and reduce bouncing to help leave a more uniform cut, too.

It also has a heavy-duty cutterbar with inch-thick sprockets and a gearbox to direct drive to the conditioner. 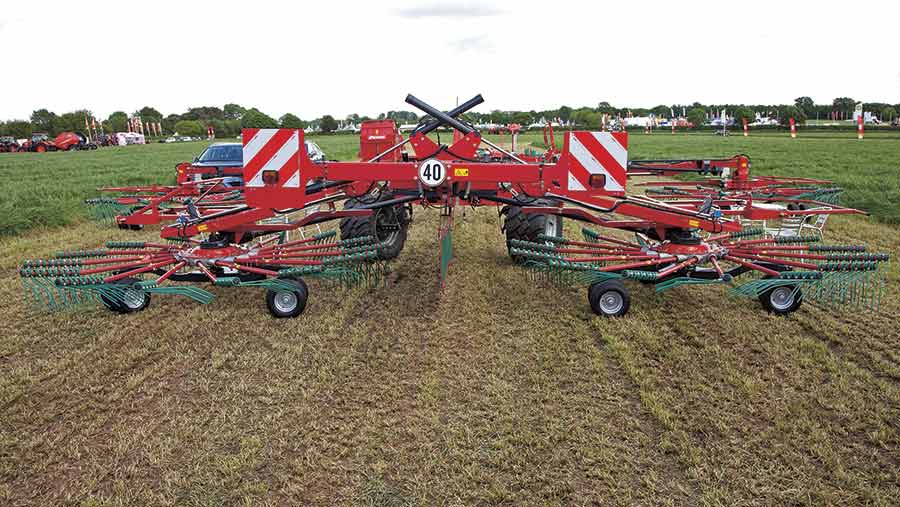 When you’re running a huge 15m four-rotor rake it takes a skilled man to keep it working at capacity, particularly in short ground.

But thanks to the efforts of Kverneland’s boffins, the Norwegian maker now offers its flagship machine with automatic headland management and section control.

The 97150C can do this thanks to a new Isobus-compatible control unit that can operate the rake almost entirely automatically.

Once the field has been mapped, the machine knows where the headland is positioned and will lift out and drop into work of its own accord. Also, as the driver moves into short ground, the rake will adjust its width automatically to the shape of the headland.

Thanks to elbow joints on the front chassis arms, the front rotors can be drawn in without lifting the machine out of work. That means it can adjust its working width from 15m to 9.8m with all rotors on the ground, and it can nip in to 9m if the front rotors are lifted.

Castors on all rotors can also spin through 360deg to avoid them getting stuck and being dragged during manoeuvres.

To help slot the lengthy machine through narrow gateways, it also has a steering axle that the driver can control from the in-cab screen.

The rake can work at speeds of up to 14kph and can be pulled with a 100hp tractor, if it doesn’t have too many steep banks for contend with. 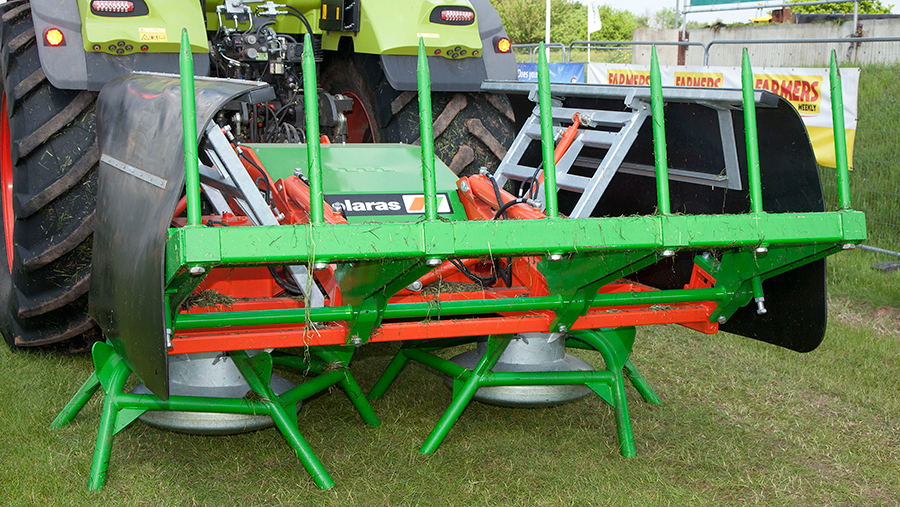 The on-site clamp at Grassland & Muck was all about getting the best crop consolidation and Dutch maker Holaras was staking its claim for clamp supremacy with what looks like a super-heavy-duty hay bob.

The 2.25t Viking is rated to handle up to 600hp and is designed to work with a forage wagon where the longer chop length of the grass is more difficult to spread.

Holaras reckons it can spread a complete wagon load in just two passes, flinging the material with its 4,000rpm rotors into a thin, even layer up to 6m wide.

It’ll also use less diesel than a loading shovel, says UK importer WM Agri, which took on the import job 18 months ago.

There are side skirts for working close to the edge of the clamp and the company suggests carrying a compactor at the same time – its Stego Pro can be filled with water to add another 5t to the total weight on the biggest models.

The system will fit to the front or rear links of a tractor – at the event it was working on a Claas Axion 950 – but it can also be fitted to a shovel where it’ll want a decent oil flow of at least 150 litres/min. 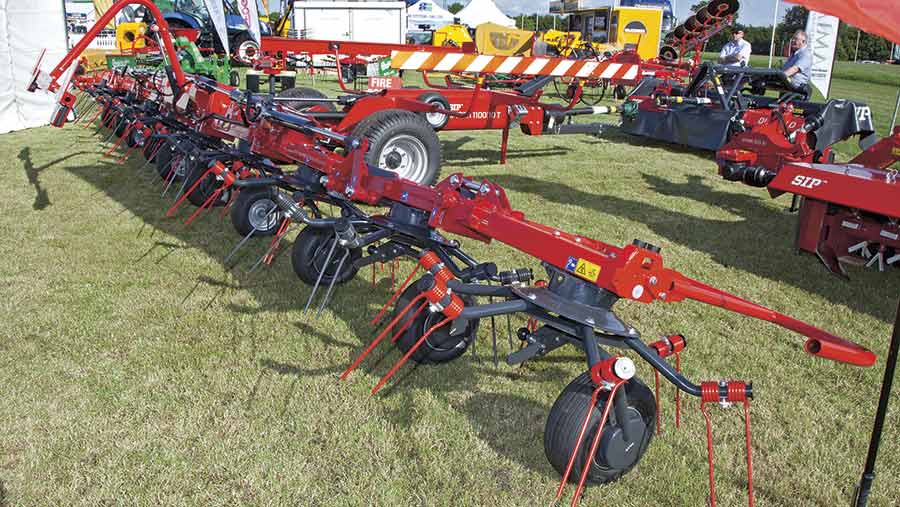 There is a new name on the UK grass machinery scene – Slovenian manufacturer SIP.

British farmers might be unfamiliar with the brand, but the company has a pretty rich heritage in the grassland sector, having churned out rakes dressed in Krone colours, forage wagons for Pottinger and Claas’ tedders. More recently, the maker also had a deal that saw Twose bringing in its smaller, low-ticket-price gear.

SIP has now put together a pretty big range of its own, which extends from the small stuff up to 15m tedders, four-rotor rakes and monster mowing outfits for which the company builds its own cutterbars in house.

The products have found homes across western Europe and as far afield as New Zealand.

Its Grassland & Muck stand was dominated by a 10-rotor Spider 1100 tedder that uses a shaft drive similar to Claas’ system – a result of its tie-up with the German firm’s grassland division.

Other highlights include various adjustments of rotor pitch through the wheels or main frame, an optional end canvas to limit throw during boundary work and a design that minimises the load on the towing tractor over steeper ground. 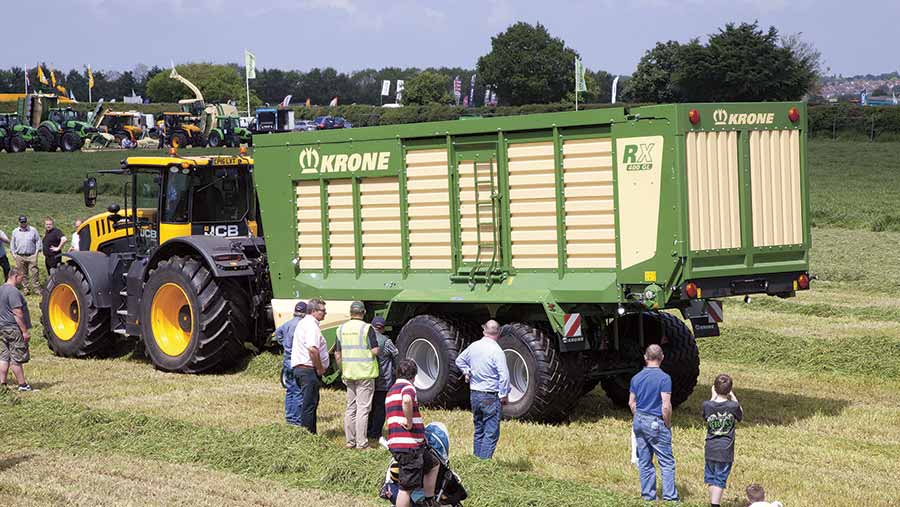 Landing at this year’s Grassland and Muck straight from the end of the production line was Krone’s new RX400GL forage wagon.

This machine is designed to work as a stand-alone forage wagon or double up as a silage trailer for working with a self-propelled forager.

Updates include a slimmer drawbar to prevent scrubbing on tight turns and a pivoting headboard that helps increase capacity. This works by sitting in the rearward position as the forager fills, helping to compact the load. Then, when the rear section is fitted, it moves forward to allow the front section above the pickup to be used.

It also uses a camless stepped pickup borrowed from the maker’s self-propelled foragers and has a 46-knife chopper unit with optional speed sharpener. Krone says this will get the whole knife bank razor-sharp in about four minutes. 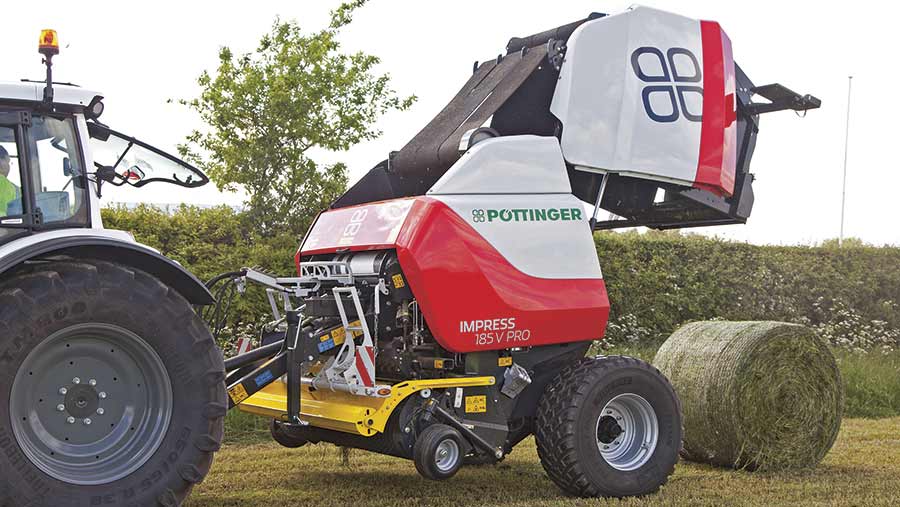 Thanks to a bold move by Austrian maker Pottinger, UK farmers have another range of round balers to add to their potential shopping list.

The Impress, which is the first baler series to be designed and built entirely by Pottinger at its factory in Austria, had its UK debut at this year’s Grassland & Muck event.

There are three models in the new range – one is a 1.25m fixed-chamber machine and there are two variable-chamber models, one of which comes with an integrated wrapper.

All balers are also available in Master or Pro spec. Master machines are the simpler of the two, fitted with 16-knife chopper units and a simple in-cab control unit.

Pottinger’s also making a big noise about its new Liftup rotor crop flow system, which directs crop over the rotor, rather than the more conventional route of going under it. This apparently gives the crop a more natural and smooth route into the chamber.

Machines are already operating on some farms on the Continent, but it’s likely to be September 2017 before UK farmers can get their hands on them. Unfortunately prices won’t be available until nearer the time. 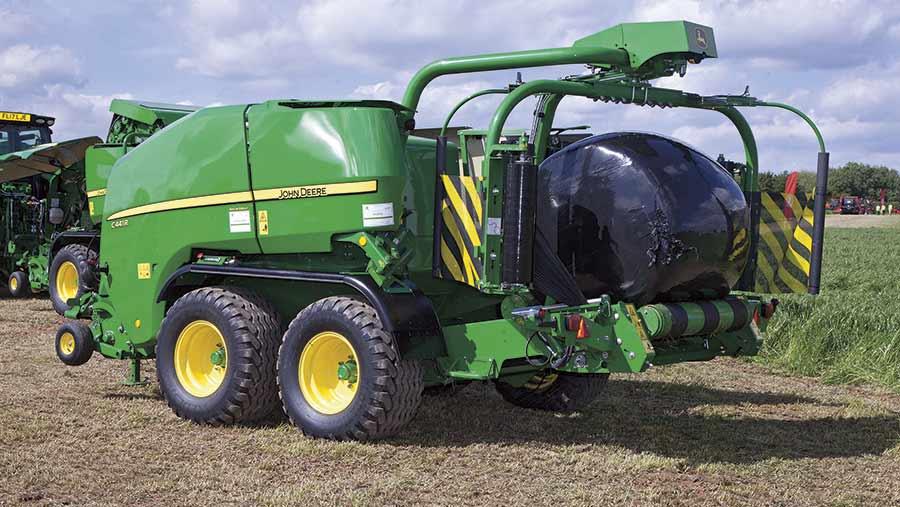 The slow baler sales of the past couple of years show little sign of any immediate improvement, but that hasn’t deterred John Deere from launching its new C441R baler wrapper to the public.

Several factors have contributed to the continuing slow sales, particularly the uncertainty over Brexit, which has made buyers cautious. Comparatively, tractor sales have improved, but farmers putting more focus on replacing their frontline machines has left little in the coffers for less-critical purchases, according to John Deere’s Chris Wiltshire.

However, he is confident that combi baler/wrapper units will continue to grow in popularity over running two separate machines.

Deere’s new model will fill the shoes of the discontinued C440 and uses the same set-up as the F441 solo baler launched last year.

Updates include a new feeding system and an 18-roll configuration in the bale chamber that the company reckons will improve its performance in a wider range of crops.