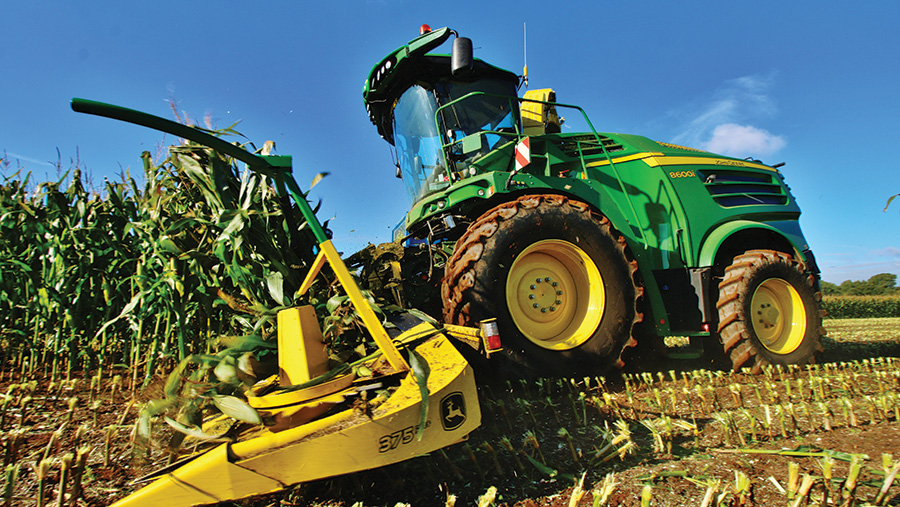 With new forager prices close to £500,000, it’s worth putting in some research before pulling out the chequebook. And who better to review a machine’s merits than its owner? Nick Fone speaks to the owner of a John Deere 8600.

Since they first made the move from a JF trailed forager to a self-propelled machine in 2006, the Swinnertons have stuck with John Deere. Initially it was a 480hp 7300 but that was replaced by a higher-spec 560hp 7450 two years later.

Another two years passed and the business’ workload had grown, fuelled by bigger dairies and a growing number of anaerobic digestion plants sprouting from the Shropshire countryside.

“We needed more output and the narrow-bodied 7450 was at its limit for both power and the physical capacity of the chopping system,” explains Mikey Swinnerton.

“We opted to upgrade to the 625hp 7750. With the extra grunt and its wider body, it answered our needs for higher work-rates at the time.”

Three years later, the Swinnertons were asked to field-test a prototype version of the company’s new 8000-series foragers.

“The 7750 had done 1,800 chopper hours and we were thinking about upgrading again with our increased workload.

“We had to keep it on that season to run alongside the prototype machines. It was really interesting to be involved with the project and to see the differences that Deere had made. Although it was the same power as our machine, the 8600 was covering at least an extra acre an hour.

“But it wasn’t just about output – the cab was a massive upgrade and the prototypes proved to be really reliable. That clinched the deal and we ordered an 8600 for the following season.” 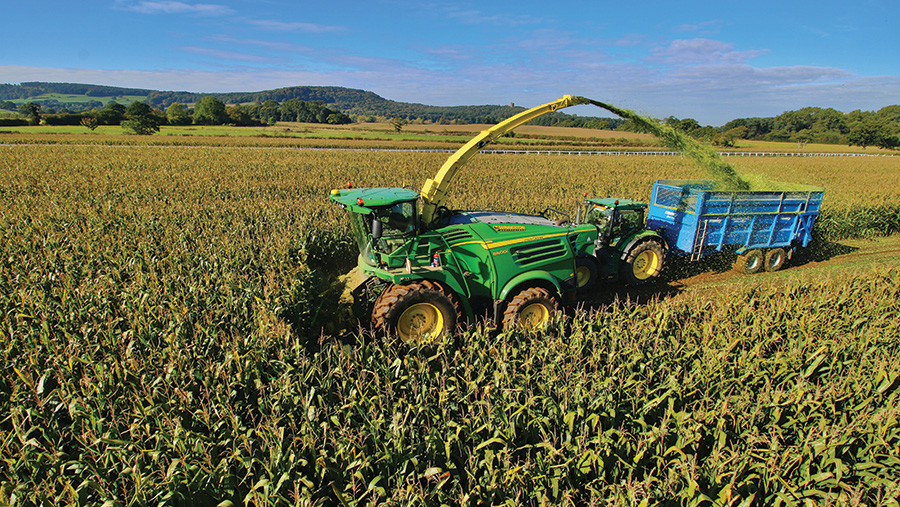 The 8600 typically clears 6.5-7.5ha/hour (16-19acres/hour) in first-cut grass and 3.5-4ha/hour (9-10 acres/hour) in maize. Much of this increase in output is put down to the redesigned chopping arrangement which sees crop flow streamlined.

Material no longer has to make a 90deg. turn as it goes around the accelerator and up the chute. Instead there is now a much smoother, gentler curve which means less power is required to blow chopped crop out the spout. 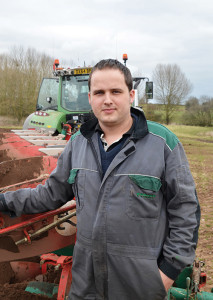 “The 7750 had the power but couldn’t make use of it because of the bottleneck at the blower. It was also restricted by the feed-rollers and header-drive.

“The slip-clutches would give out too easily when you really loaded the machine up and crop flow into the drum would suffer. All those issues have been sorted on the 8600.”

A much beefier grass pick-up with a chunkier driveline and bigger diameter feed-rollers with hydraulic damping to even out lumpy swaths have improved crop flow into the machine.

The latter change has overcome one particularly annoying feature of the 7750 which saw the metal detector regularly tripping out as the feed-rollers bounced up and down.

From a driver’s point of view the new cabin and controls are a big improvement and things are smoother on the road.

“The cab is a huge step forward and the touchscreen controls are just so much more operator friendly.

“With the engine mounted right over the tail there’s much less transport bounce and in the field the taller tyres have significantly improved traction and clearance – I haven’t had it stuck yet.”

As seems to be the way with any ultra-sophisticated new machine, the 8600 did suffer a few electrical gremlins and software issues last season, something of a surprise given the faultless performance of the two prototypes the year before.

“We’re fortunate that our dealer Rea Valley Tractors were heavily involved in the prototype testing too so they knew what was what and had things sorted quickly,” says Mr Swinnerton.

As for mechanical issues, there was just one hiccup.

Whenever a stone or lump of wood went through the feed-rollers it had a tendency to crease or put a dent in them.

John Deere has apparently rectified this with extra bracing bars for this season.

“The first thing I would add would be a swivelling seat. We load to the right and with your body planted facing straight ahead, by the end of the day you’ve got a very stiff neck.

“The only other niggle is the additive tank filler. Sited right down below the engine hood, you can’t tip up a decent-sized can. All it really needs is a bigger filler neck.”

As well as a beefier driveline and clutches, the grass pick-up has had a couple of tweaks that have markedly improved its performance.

The auger flights now overlap to draw crop to the centre of the feed-roller opening which has proved a big plus-point in sticky grass. Auto speed-matching for the pick-up tines means there’s one less thing for the driver to think about.

Being 35% wider than the previous version, the 6.2m Zurn whole-crop disc header has helped to steady up forward speeds in the field. Previously the stick would be pushed right forward to try and keep the forager full.

“Headers are generally not an issue on Deere foragers and the 10-row Kemper has proved bomb-proof for maize – but then it ought to be for the money,” says Mr Swinnerton.

Would you have another John Deere 8000?

“Well yes, we’ve actually upgraded for this season to the range-topping 843hp 8800.  It’s Deere’s ex-demo machine with 500 hours on the clock so we got a good deal.

“With ever less predictable weather we’re finding we need the extra power to ensure we can get the crops when we have the chance. At least with the extra muscle, we can stay on top of the job and if we do get behind we’ll have a chance to catch up.

“I’m looking forward to having the big 19-litre Cummins Tier II motor and not having to bother with AdBlue. It’ll be good to have all the extras like the folding auto-fill spout and heavier rear axle. And the 12-row maize header should mean that we never have to hitch up a trailer again to strike out – that will certainly help push output.

“There’s no doubt about it, up until now Deere had lagged behind with its foragers – they were desperate for an update. If they hadn’t had a major overhaul we wouldn’t have been looking at another make but our experience with the prototypes gave us the confidence to stick with it and that’s paid off.”