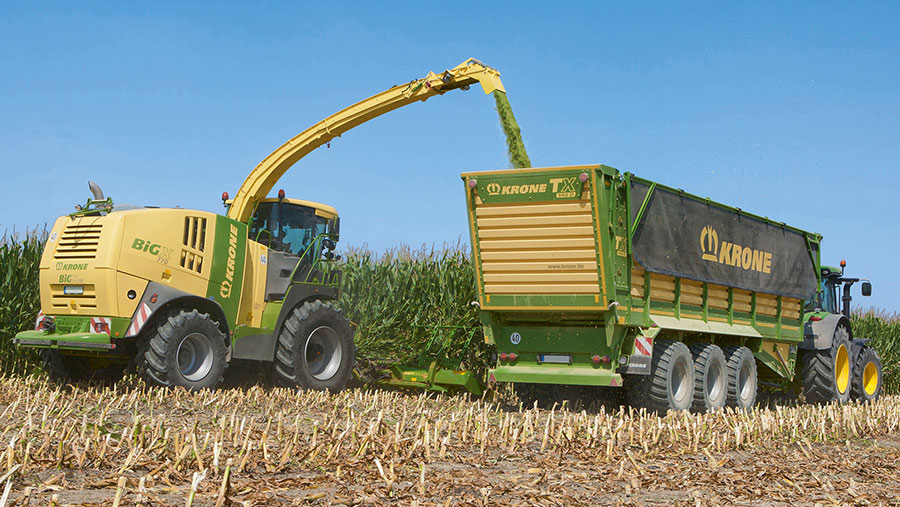 Krone has put a Liebherr-made V8 lump in its 700 and 770 Big X forage harvesters – a move it says will increase torque at low revs to provide extra power in tough conditions.

The company also says a batch of harder-wearing components makes the Big X capable of clocking 1,000 hours before it requires its first oil and filter service.

Krone’s RX range of forage wagons will also be on show at the Grassland & Muck event, with three models from the smaller RX360, the mid-sized RX400 and monster RX460, which all have a steel bodies with sloping floors.

All three models can munch grass across a width of 2m, while an eight-row rotor cutter with 46 knives can chop material down to 37mm.

A moveable headboard, which tilts to increase the capacity of the wagons by a further 4cu m, is available on the 400 and 460 models.

The new models can also be fitted with a steering system that counter-steers the wheels on slopes to stop the wagon toppling over.

This year’s Grassland and Muck is the place to see all the latest developments in the world of farm machinery, including from some of the major players in the GPS sector.

Visitors can find out how to save cash by improving the accuracy of applications, as well as how to make the most of new, more sophisticated operating systems.