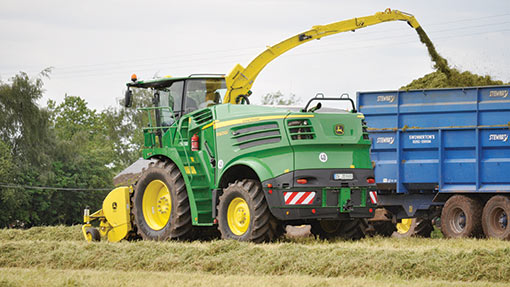 The cat is officially out of the bag. Images of John Deere’s 8000-series self-propelled forage harvesters have already been posted on social media sites, such is the storm of excitement this all-new range of forage-consuming giants has created at its launch in other countries.

Power comes from two nine-litre and 13.5-litre Deere PowrTech PSX engines. The engines have been repositioned longitudinally and now sit lower at the rear of the machine to improve weight distribution and stability.

Transmitting power from the engine to the harvester’s drive systems is a dry-sump gearbox, with an improved bevel gear design to reduce driveline power losses.

The single-output drive system now includes the cooling pack fan and hydraulics, dropping the need for additional belts and pulleys.

Keeping the temperature in check is a cooling pack that has now been moved to behind the cab, expelling hot air out the top rear of the bonnet. The 8000-series keeps the outgoing 7000-series Pro-Drive transmission with auto-shift and diff-lock.

Deere has made quite a few changes here. Its standard 630C grass header has been replaced with the 639 model.

This is available in 3-4.5m widths and uses Deere’s new Vortex auger, which has a new flight design for more consistent crop delivery.

Drive to the header is all-hydraulic to allow independent, on-the-move speed control for the tines and auger.

Table options include Kemper maize headers up to 10-row with auto steering/header control, plus a Zurn Proficut 620 wholecrop header.

Feed roller and chopping cylinder access for maintenance is now better thanks to a simple double-clamp release system, allowing drum access in less than a minute. The drum can also be quickly accessed in the field, says Deere, without removing the header.

Auto shearbar adjustment is standard, as is the auto length-of-cut system, which allows the operator to pre-select a precise cutting length.

Depending on requirements, drum configurations of 40, 48, 56 and 64 blades are available, with thicker, tungsten carbide-coated knives for improved service life.

The new processor can now be repositioned in five minutes to allow quick changes from crop to crop and its new swing-in/swing-out design is said to make removal easier. Other options include multiple knife options, including the KernelStar2 multi-crop processor, which now features bevelled discs for improved tearing action.

The radiator screens can be cleaned using air provided by a built-in tool compressor, there’s a new auto-lube system and even a water tank for washing your hands.