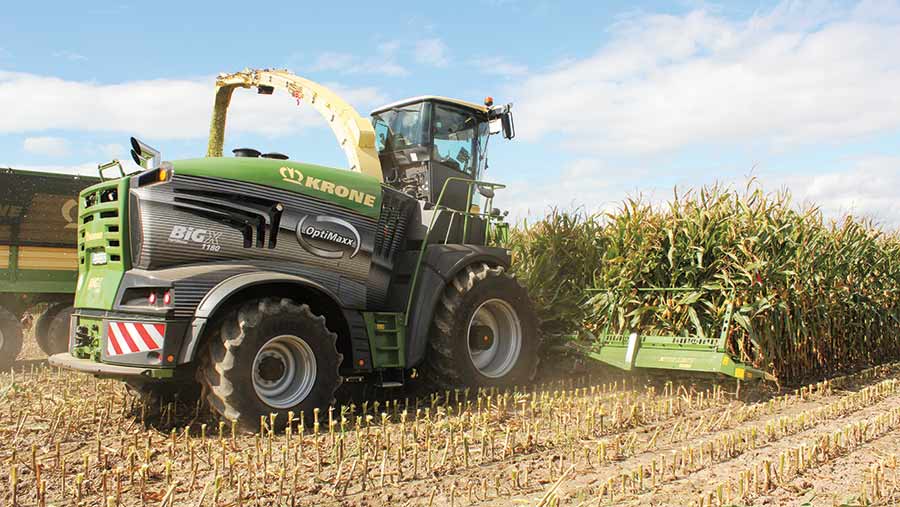 Krone has raised the power output bar with its new 1,156hp Big X 1180, offering large-scale farmers and contractors its most formidable forage harvester yet.

The machine sits at the top of the firm’s updated range of wide-body Big Xs that carry its 800mm-wide crop flow systems and were launched at Agritechnica last year. It replaces the outgoing 1,110hp 1100.

Currently, the only other forage harvester on the market that comes close to either machine’s power output is John Deere’s new 9900, which tops out at 970hp, so Krone has cemented its claim to the most powerful agricultural machine on the market.

The company has dropped the V12 MAN power unit used in the 1100 in favour of a 24-litre V12 Liebherr – something it shares with the 9900. It also has a beefed-up driveline with bigger pulley and eight-rib V-belt, instead of seven, which helps transfer the extra power.

Like the smaller V8 engine fitted to the 680, 780 and 880, the V12 only uses AdBlue to comply with the EU’s Emission Stage 5 standards, which requires less maintenance than a DPF, says Krone.

Across the Big X wide-body range there are multiple tank configurations available to keep the harvester working on long shifts, including a standard 930-litre main fuel tank and 150 litres for AdBlue.

In addition, there is a standard side-mounted tank for 170 litres of diesel and 230 litres of silage additive or water.

Optional extras include a 400-litre auxiliary fuel tank, taking fuel-bearing capacity up to 1,500-litres, plus an additional silage additive tank that can carry a further 275 litres of additive mix. 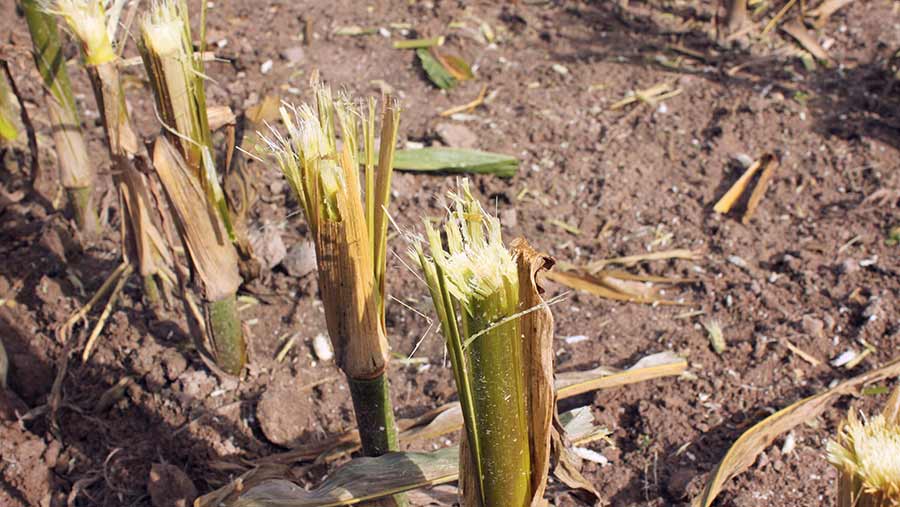 To go with the extra horsepower at the top of the series, Krone have also made some improvements to the crop processing system, including its new OptiMaxx corn cracker design.

The unit works in the same way as before, consisting of two heavy-duty, chrome-plated toothed rollers. As standard, these run at a 30% speed differential, with 40% and 50% variations available as options.

However, rather than the teeth on the new corn cracker rollers being straight, they are set at a 5deg angle to create a greater shearing effect, which Krone reckons significantly improves maize kernel shatter at a range of chop lengths.

Compared with the Big X 700-1100, the rollers are also 10% wider, run 7% faster and have a more aggressive spring assembly to apply a higher and more consistent pressure to the material flowing through the conditioner.

The standard roller diameter is 250mm for the 680-1180, with various teeth configurations available to suit desired chop length. 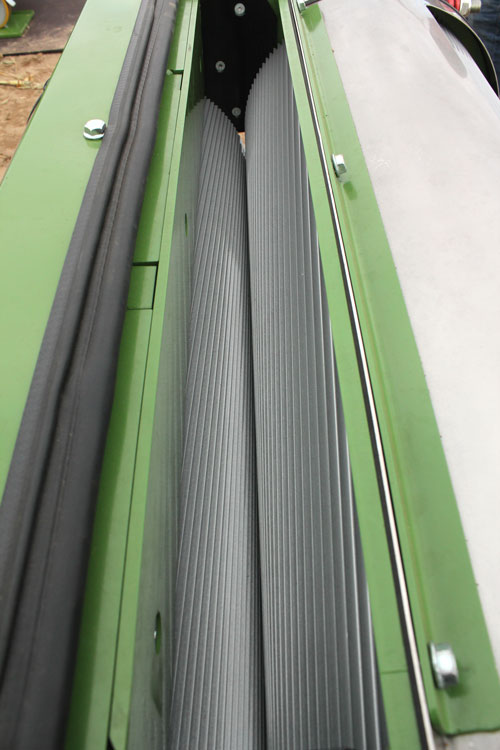 Krone say this standard roller size is a limiting factor for the new flagship 1180, so buyers of the pokiest machine are advised to go for the optional OptiMaxx 305 rollers, which are claimed to be the biggest on the market.

As the 1180 is capable of processing up to 400t/hour – about 100kg/sec – they offer a further 11% surface area and 20% more circumference speed than the 250mm version, helping the operator get the most out of the machine while maintaining silage quality.

To cope with the increased load of the OptiMaxx system, roller bearings are bolstered and connected to an auto-lube system. Krone expects each component to last a minimum of two years before replacement. A temperature monitor also helps alerts the driver to bearing overheating.

The chopping system now includes an automatic shear bar adjustment, which detects knocking and resets it parallel to, and a programmed distance from, the drum blades.

Operators still have the option of doing it manually from the control panel outside the cab and to the front of the machine if they wish.

Other notable features include the VariLoc system – already an option on models launched last year – which allows drivers to switch drum speed from 1,250rpm to 800rpm and vice versa, adjusting chop length in a matter of minutes.

This is particularly useful if switching from short chop maize for AD to long chop for dairy in the same day and only requires the removal of one guard and the turn of a spanner.

Alongside output and performance gains, Krone has also added to its digital offering with an EasyLoad system. It uses 3D image analysis to control the spout and automatically fill trailers to a set strategy, either front to rear or rear to front.

At present, it will only work on trailers running adjacent to the forager, but Krone says it is working on the capability to fill trailers behind when opening out maize or wholecrop fields.

In a tie-up with Italian weighing and sensing experts Dinamica Generale, Krone customers will also be able to spec machines with the new AgriNIR near-infrared sensor, which records several crop characteristics to aid feed ration design and record keeping.

Data is mapped and recorded on the forager’s terminal and is compatible with various third-party software applications. A fully functional spout-integrated sensor will cost in the region of €30,000 (£26,650). 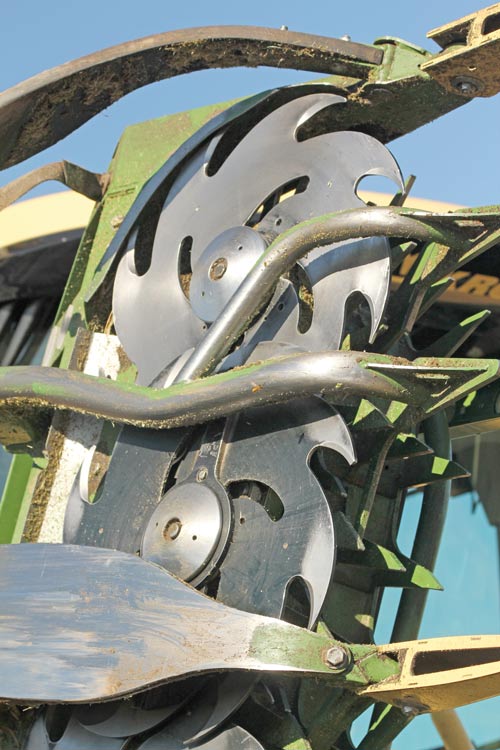 Krone has added the XCollect maize header range to its line-up, offering more efficient cutting and improved residue management over the existing EasyCollect.

The company has a unique take on a maize header, with its EasyCollect using chain-mounted and static blades to cut the crop, while collecting fingers above shepherd the upright plants into the centre.

This aims to ensure each maize plant is fed into the chopper lengthwise, which helps to minimise lumpy flow and inconsistent chop length.

However, for the new XCollect design, the cutting and collecting elements have been separated onto two separate drivelines, with fast-rotating scythed discs cutting the crop at the bottom and fingers collecting and feeding the plants into the harvester just above.

Rather than the forced cut of the EasyCollect, the discs provide a free cut that smashes the maize stalk left on the ground, which helps residue break down quicker post harvest, says Krone.

Cutting disc speed can be varied between 1,000 and 3,000 rpm to adapt to crop conditions and individual discs are protected by shear plates and in pairs by wear-free ratchet clutches. Replacement of discs is also a doddle, with one central bolt holding them in place.

Electronic aids on the XCollect fronts include active ground contouring, which now includes three skids – one in the centre and one either end – rather than the two outer skids on previous EasyCollect models.

While the EasyCollect range will still be available, the new XCollect is expected to be popular among Big X customers for its reduced machine wear and faster degrading of stalks.

The header is available now in eight-row, 10-row and 12-row (6m, 7.5m and 9m) tri-folding versions and is compatible with any Big X machines built from 2010 onwards.

Finally, in a change of policy, Krone’s 6- to 12-row EasyCollect headers are now available for owners of other forager brands.