The big foragers took to the grass at the triennial Scotgrass event near Dumfries, where punters got the chance to see machines from the likes of Fendt, New Holland, Claas, Krone and John Deere in action. 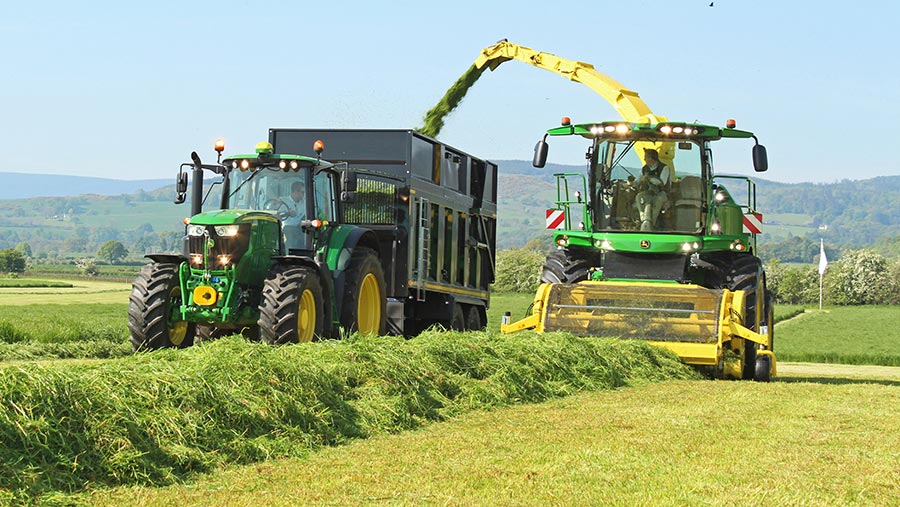 The 9900i pictured is the flagship of the range and is fitted with a 24.2-litre Liebherr powerplant that delivers an impressive 970hp.

Opened right up, this engine is actually capable of more than 1,000hp, but Deere chose to dial that figure down a little to give it a flatter torque curve and better driving characteristics.

The result is constant power delivery between 1,400rpm and 1,800rpm, with peak torque coming at just 1,350rpm.

This work has also helped reduce fuel consumption, which Deere says is 10% better than the biggest of the previous Cummins-powered 8000-series machines.

Engine outputs aside, all models in the range feature a fairly similar spec.

This includes a Prodrive hydrostatic transmission with automatic engine speed management and an 850mm-wide cutterhead.

To make the most of the extra power, engineers have also strengthened the driveline and hydraulic circuits, which has helped increase the speed of crop flow.

Other options include a new heavy-duty kernel processor called the XStream.

This has a 250mm roll diameter and a 50% speed differential for more aggressive smashing of the kernels.

Despite having a pretty new range of grass kit on show, it was the thrum of the Katana forager’s MTU engine that got the punters on the Fendt stand drooling.

The firm gave a run out to the bigger of its two-model range, which serves up a healthy 850hp from a 21-litre V12 block.

Coupled to that, the Katana 85 carries a two-range hydostatic transmission, and Fendt says the combination delivers some very competitive fuel consumption figures that can be improved by running in eco mode, where lighter crops allow.

Four-wheel drive is standard, too, which may well be an attraction for anyone harvesting in less-than-ideal, late-season conditions.

The business end starts with three pairs of oil-powered feed rollers, which pull the crop through to an 800mm-wide drum.

A 28-knife setup is standard – offering between 3.7mm and 20.7mm chop lengths – but buyers can also switch to 20 or 40 blade arrangements that extend forage sizes to 29mm.

Those hoping to catch a glimpse of New Holland’s new flagship forager – the 911hp, V20-powered FR920 – may have been disappointed, but there were still two faces from the firm’s Forage Cruiser stable doing the business in Dumfries. 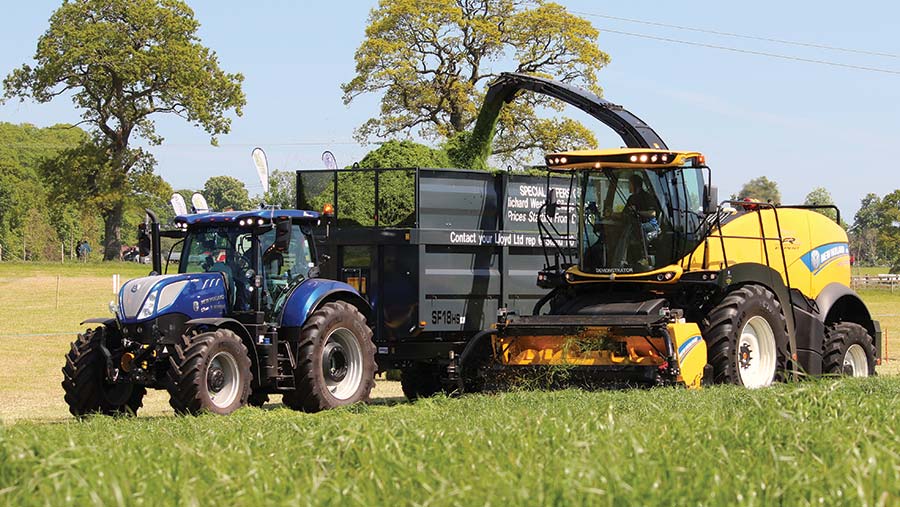 The latter runs a 15.9-litre, in-line six cylinder from sister firm FPT, and the power package has delivered some solid performance stats in trials completed by the DLG German testing house.

It recorded fuel use at a rate of 0.5 litres/t of maize harvested (when chopped at 8mm), which equated to a 21% improvement over the FR700 it replaced.

This is dependent on the driving mode selected – power cruise adapts engine and ground speed in relation to the load, which saves fuel where possible.

The driveline includes a four-speed hydrostatic transmission, and New Holland has it kitted out with four-wheel drive and its Terralock traction management system.

Up front, four feed rollers push the crop through an 860mm opening to the 884mm cylinder.

Chop lengths range from 2-33mm depending on the blade configuration – the firm offers eight, 10, 12, 16 and 20-knife arrangements.

This year, Claas is celebrating the fact that it has produced more than 40,000 self-propelled forage harvesters since its original SF60 rolled off the production line in 1973. 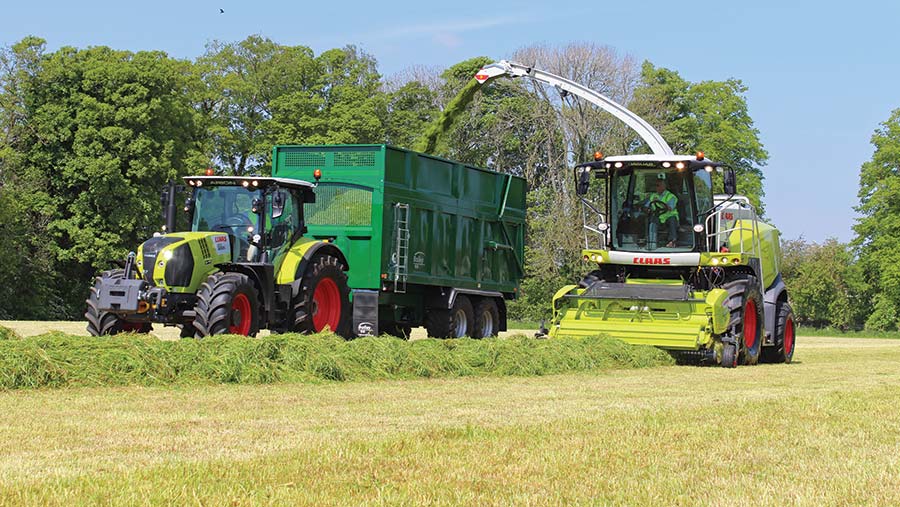 As a result, the Jaguar forager pictured is sporting the firm’s 40,000 livery, which neatly masks the fact it’s an 850 model.

With 462hp on offer from its six-cylinder Mercedes engine, the 850 sits at the lower end of the 800-series range, just above the entry-level 840 that develops 408hp.

The current top dog in the four-model series is the 585hp 870, but this is soon to be trumped by the 880, which Claas announced last summer.

However, its more compact design and cheaper price tag should suit those that don’t need all the bells and whistles of the 900-series.

Krone stole the headlines last year with the launch of its biggest ever forager – the 1,156hp BigX 1180 – but it was the smallest of its four-unit, wide-body forager family that took to the grass at the Crichton site. 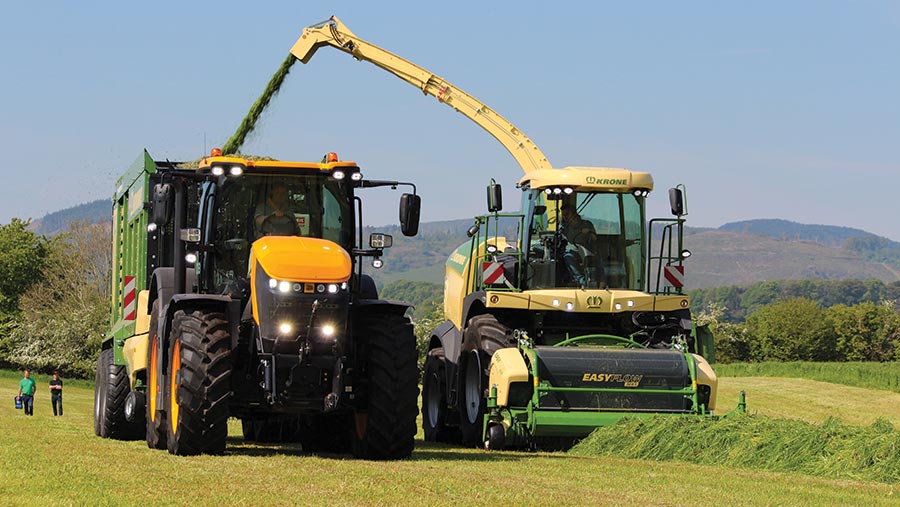 A two-range hydrostatic drive offers speeds up to 40kph and buyers have the option of speccing a four-wheel drive kit where maize harvesting is likely to turn boggy.

This is considerably more than the likes of the Fendt Katana, which has a 620mm distance from the metal detector to the cutting head.

Chopping is done by an 800mm-wide drum with a chevron-style knife layout and Krone offers the choice of 20-, 28- or 36-blade setups for most customers, though 40- and 48-blade kits can be sorted to deliver the ultra-short chop demanded by biogas plants.

An Optimaize kit allows operators to quickly adjust the chop length by up to 10mm from the cab, without having to swap or refit the chopping drum.

It uses a mechanical gearbox on the drum belt drive to reduce the drum speed to reduce cutting frequency.

For those with maize in mind, there are also various corn conditioner options, with most carrying a saw-tooth profile.