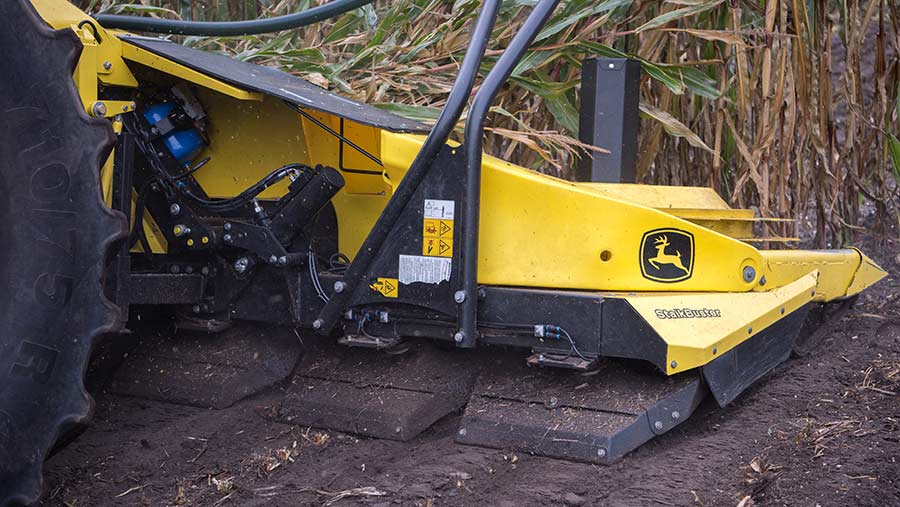 Header maker Kemper has developed a chopping system that fits beneath a regular maize header to cut stubbles tight to the ground.

The Stalkbuster is designed to obliterate the habitat of the corn stalk borer – an insect which can wreck maize yields and makes its home in old cigar-shaped maize stalks – by chopping and mulching in one pass, so there’s no need to follow the harvesting job with a mower or mulcher.

Central to the system is a row of rotating flattened knives that spin at 1,700rpm, pulverising the stubble just above the ground so that the remains rot quickly after cutting.

Kemper reckons that up to 40% of all corn stalks are driven over by the chopper and the carting tractors and trailers, so cutting them before that happens makes sure they’re destroyed, particularly as the corn borer can still survive in flattened stubbles.

There are extra benefits for crops drilled after maize, says Kemper, as the residues within the stalk rot down better, so a following crop of wheat should have less exposure to diseases such as fusarium. 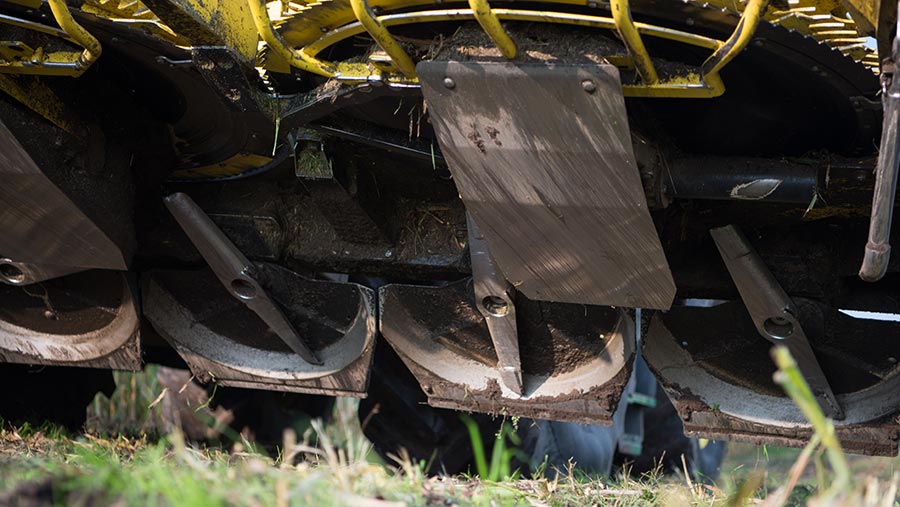 The rotating blades – each with a 73cm diameter – are suspended independently under the header and smash the stubble to the floor in four to five strokes.

Because all of the stubble is standing upright at the time of cutting, the knives sap surprisingly little power from the central drive shaft of the header. Each row needs about 4hp, so an eight-pronged header draws just 32hp, far less than the 200hp needed for a 6m wide mulching machine.

Pneumatic pressure cylinders help keep a constant cutting height maintained across the field regardless of ground conditions. Kemper says it tried using compression springs, but found that they pressed too deep in sandy soils and were too weak to make an impact on a clay land.

The advantage of pneumatic cylinders is that the pressure can be controlled. And, when the forage harvester goes in reverse, the cylinders collapse and the trailing soil sampling units are lifted so that they don’t bury into the ground and get damaged. 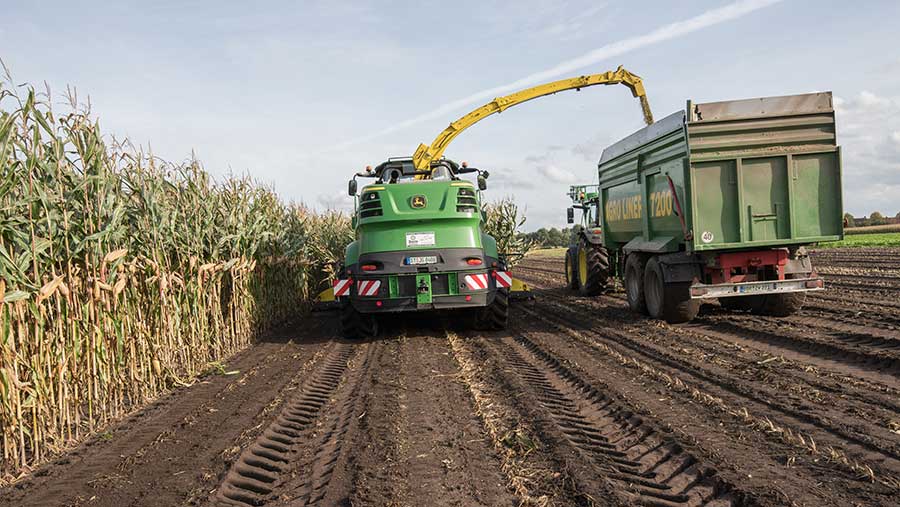 Contractors also have the option of raising the Stalkbuster out of work if customers don’t want the stubble chopped to save costs.

Several customers have been testing the Stalkbuster this year, with production set to start properly for next season. Only an eight-row version is available initially, which is married to the 6m 460 Plus corn head with large drums.

Although that is a significant investment, Kemper says it avoids the need for a secondary pass with a mulcher after the forager and so cuts out extra diesel and labour costs associated with mulching.

What is a corn stalk borer?

The corn spear borer or common stalk borer lays its eggs on the maize plant at the end of June. After 10 days the eggs are released and the caterpillars chew their way down the stem, causing the plant to become severely weakened and all but stopping cob production.

The plant can also buckle and cause fungal infestations in the cob. A heavily affected crop can give a yield loss of up to 40%. The caterpillar then overwinters in the chopped stalk pipe just above the ground, after which it pupates into a butterfly in the spring and the cycle repeats itself.