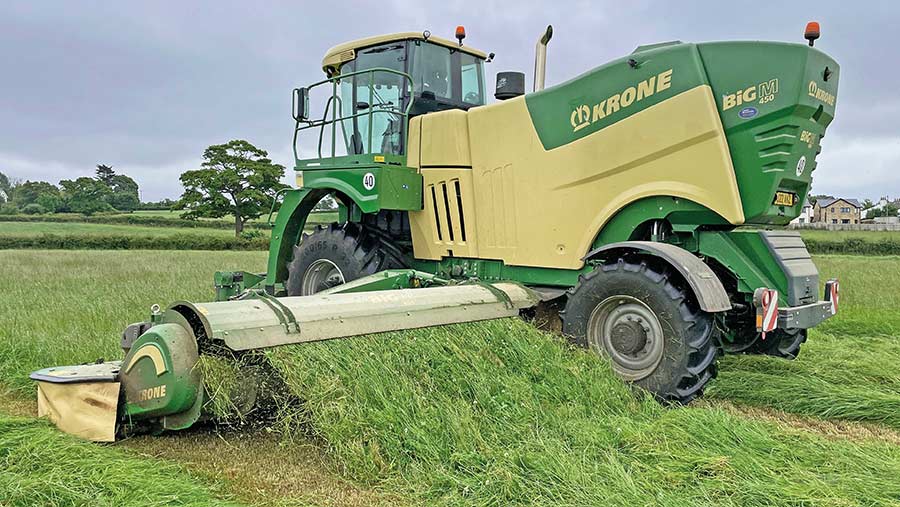 Deciding to shell out forage harvester money for a machine that simply mows and conditions grass requires some careful balancing of the books.

That’s why Nick Hoyles of Lancashire-based Hoyles Contracting spent plenty of time working out running costs before deciding to invest in his first Krone Big M.

Due to their purchase price, these machines still have a relatively niche following in the UK, but in Ireland, where grass is in their blood, they sell in considerable numbers.

Keen to find out more, Mr Hoyles paid a visit to the Emerald Isle to see the machines in action and quiz fellow contractors on the economics.

He was seriously impressed with the output and his research concluded that a minimum of 2,000ha of mowing was required to justify purchasing a new model.

Hoyles Contracting cuts a considerably larger area than this, so the Big M looked to be a viable option.

However, rather than launch straight into the new market, Mr Hoyles found a 2015 Big M 420 that had just 800 hours on the clock and, at £175,000, represented a considerable saving. 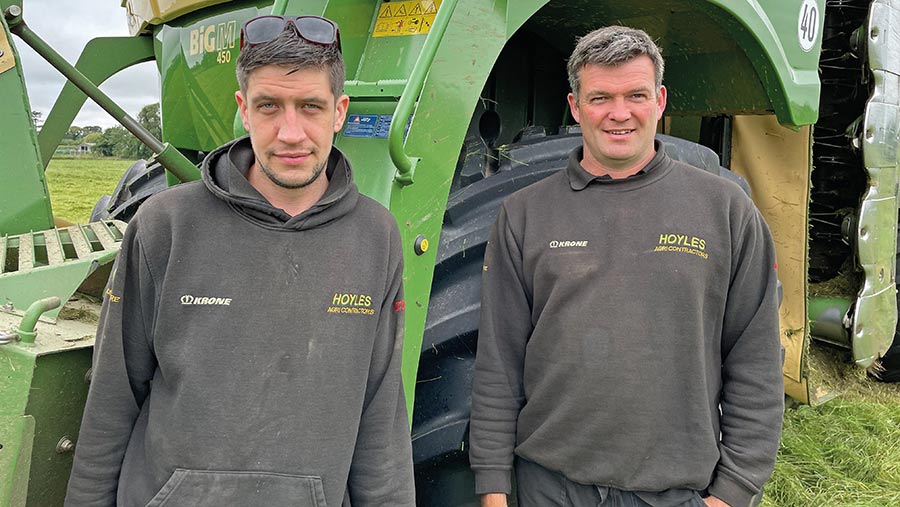 He ran the 420 for three seasons, which was long enough to convince him that it made sense over running an extra set of triple mowers.

At this point, his local dealer, Carrs Billington, had a stock 450 that was well specced, attractively priced and came with a three-year warranty.

Switching to the new model seemed cost-effective and gave him the opportunity to fix his costs.

His plan is to keep it until the end of the warranty period, at which point he’ll work out if it makes financial sense to change it or get a couple more years’ work out of it.

The business also has two sets of triple mowers that are deployed when multiple customers want their grass cut at the same time.

However, they try to push as much work as possible through the Big M, aiming to notch 3,000ha annually.

When the first Big M arrived, Mr Hoyles and driver Matt “Chippy” Chippendale noticed a significant improvement in output over their largest triples.

“Speed was marginally quicker on the straights, but we gained huge amounts of time on headlands as the Big M can loop around in one and go straight into the next run,” says Mr Hoyles.

Other benefits include the fact that the mowers are always fitted and ready to go, the outfit is far more manoeuvrable in small fields and the engine has a combine-style air cleaner that means it doesn’t get hot. 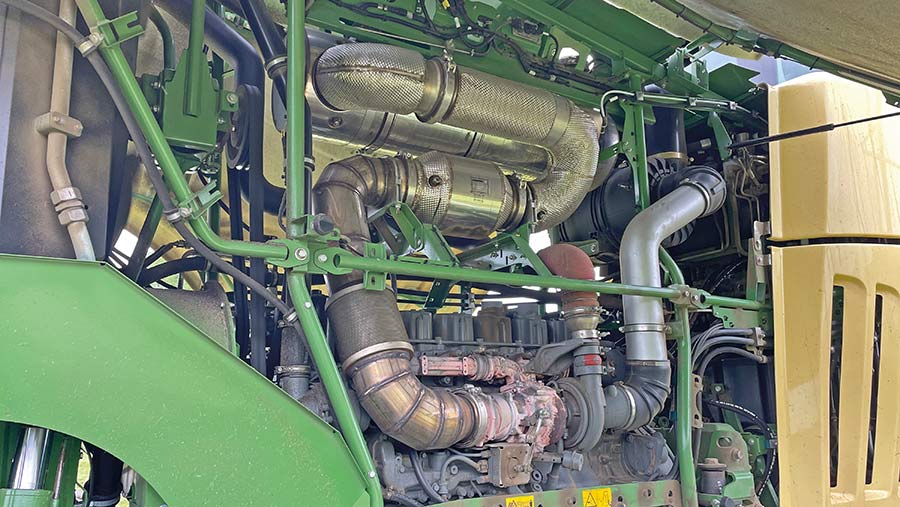 “When we’re using tractors with a set of triples in seedy grass, we’re always struggling to keep them cool and seem to be forever stopping to clean off the radiator screens,” says Mr Chippendale.

“With the Big M you can run for several days in the dirtiest conditions without going near the cooling pack – I do blow it out every week, but it’s a maintenance job rather than a reaction to it overheating.”

“When I get back on the triples, I really notice the hum of the mowers and I get pretty fed up with it by the end of the day – the Big M is a much more relaxing place to be.” 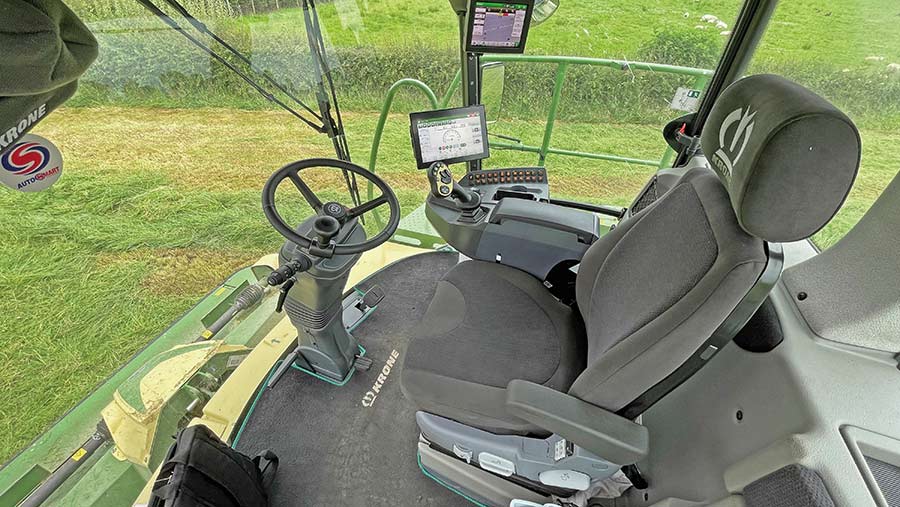 Both of Hoyles’ Big Ms came fitted with auger groupers that allow the entire 9.9m working width to be gathered into one row.

These rarely get used in heavy crops, but for lighter stands they occasionally build up larger rows to help prevent the grass drying out too quickly.

However, they always use the outside grouper when cutting the headland so that it pulls grass away from the hedge or fence, making life easier for the rake operator.

Because the engine is so powerful and rarely pushed to its limits, the Big M also uses less fuel an acre than the farm’s John Deere tractors running three mowers.

“The 450 uses an average of about three litres/acre and I can get it nearer two litres in a light crop,” says Mr Chippendale.

The obvious downside to a self-propelled mower is that there isn’t a spare tractor available to do other jobs outside the mowing season.

That said, as most of the firm’s work is centred around grass, there aren’t many out-of-season tasks for a tractor that’s large enough to run a 9.9m set of mowers.

“A tractor of that size and a good set of mowers are getting towards the value of a Big M, so unless there is a lot of profitable work for the tractor to do when it isn’t mowing, I don’t really see the benefit of going that way,” says Mr Hoyles.

“Plus, once you’ve used a Big M, it’s very difficult to go back to tractor mowers,” he adds. 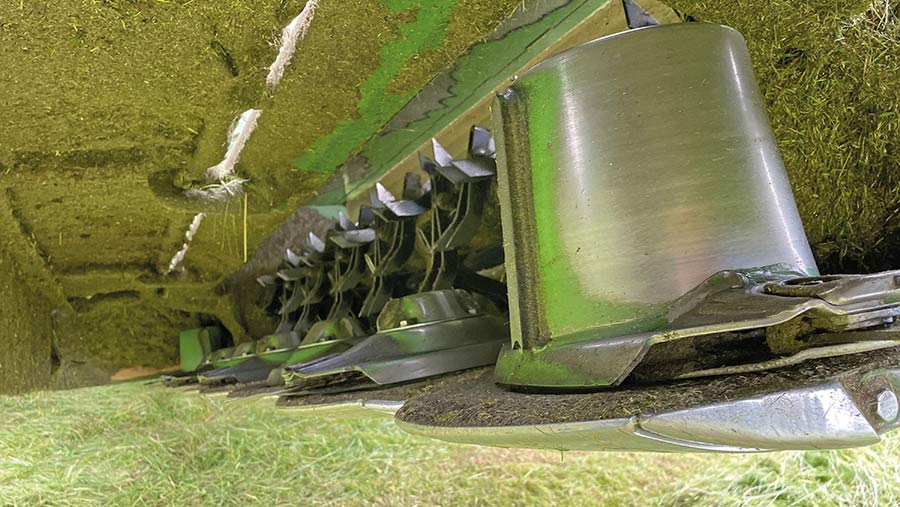 Stepping up from the Big M 420 to 450 saw a significant hike in output, with working width going from 9.7m to 9.9m and top mowing speed increasing from 20kph to 25kph.

The switch from a 423hp MAN engine to 449hp Liebherr also means it can maintain output in the heaviest grass crops.

But one of the biggest productivity gains has been the addition of GPS autosteer, which means the mowers can be driven at full width on every pass.

As the Hoyles run John Deere tractors, they opted for a Greenstar system that integrates with Krone’s software so that it can be activated using a button on the joystick. 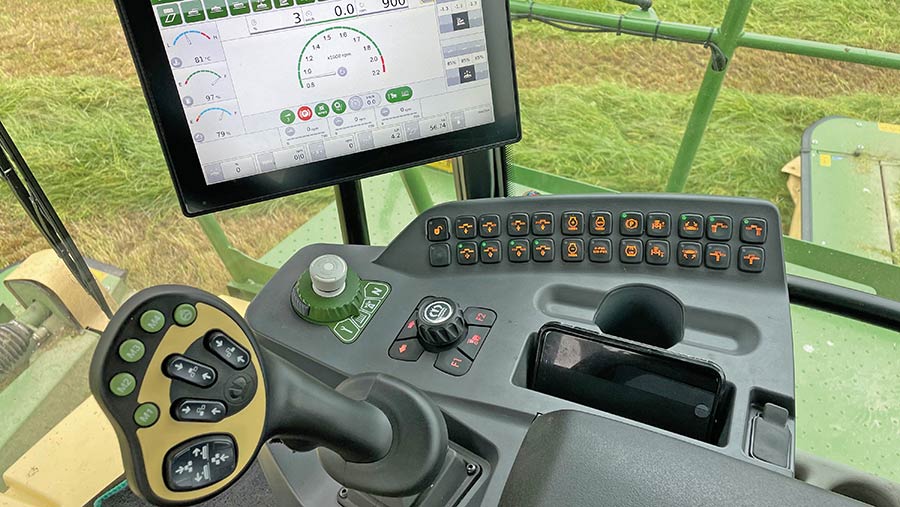 Mowing quality has also improved thanks to a hydraulic float system on the decks that gives a “bowling green” finish.

“I like the fact that I can adjust the pressure from the cab to get just the right amount of float to suit the conditions,” says Mr Chippendale.

The 420 had sprung mower decks, which achieved a decent finish, but were less consistent.

Plus there are fewer misses between the beds on hillsides, thanks to a more sophisticated side-shift system for the front mower.

This now moves automatically to counteract the slope and has a mirroring function so that it shunts across on headland turns, meaning it’s already in the correct position to cut the other way.

Crop flow has been improved by switching to end- rather than centre-drive mower beds, which avoids grass stalling on the central gearbox guard as it passes through the mower and results in a more consistent swath.

The cab is also a step up in quality, with better sound deadening, a higher mounting position and a touchscreen for setting the machine and monitoring performance.

As the 450 is yet to reach 500 hours it’s hard to comment on reliability, but there have been a couple of teething problems, such as a cracked belt tensioner, faulty front mower gearbox and dodgy slip clutch on the right-hand mower.

However, these were replaced quickly by the dealer and didn’t stop them for long.

Like any machine, the Big M has room for improvement. One of these is the design of the rear lights, which stick out beyond the wheels when turning and break easily when caught.

They’re mounted on a horizontal swinging arm, which Mr Hoyle thinks should be replaced with a vertical fold that can be operated from the cab.

Other bugbears are the fact that the large bonnet results in poor rear visibility, and there is no speed steer function.

“The turning circle is brilliant, but I have to crank the wheel round about four times to turn on the headland and it would be handy if there was an option to reduce this, like there is on our tractors,” says Mr Chippendale 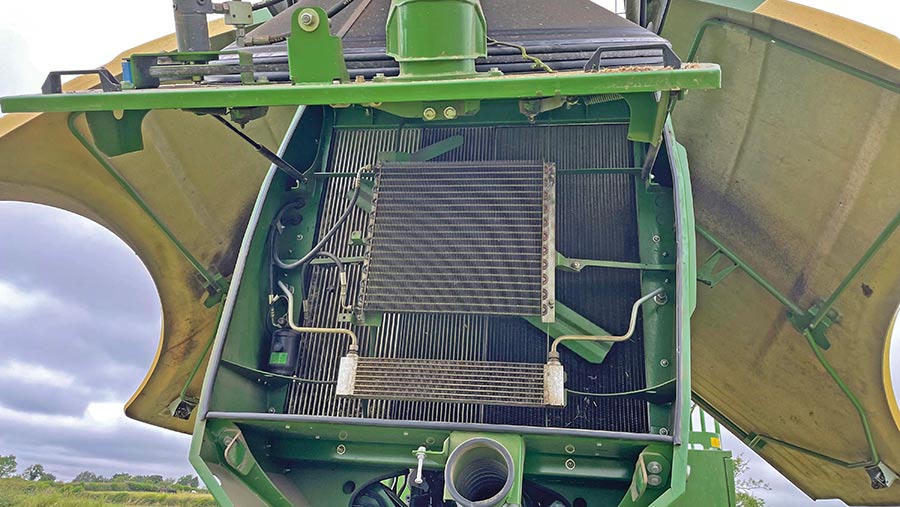