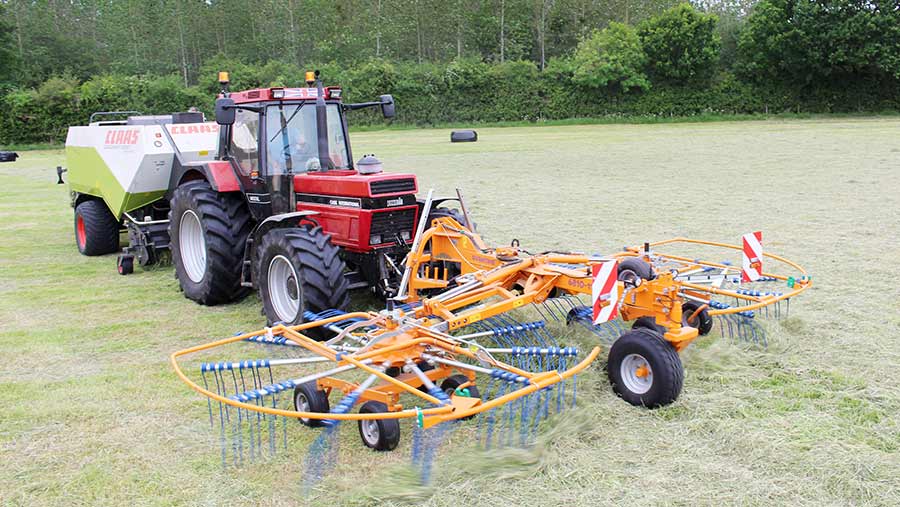 A North Yorkshire farmer is running an Italian-built front-mounted rake combined with a baler on the rear to make his rowing and baling operation a one-pass affair, curbing the reliance on hired-in help in the process.

Simon Smith runs an 800ha contract baling operation alongside his family farm, but invariably found himself rowing up grass with one tractor and then swapping seats to re-enter the field with another to bale the recently formed rows.

He was becoming frustrated, as jobs were taking almost twice as long and it was beginning to affect the business’s profit margin.

His focus has been further sharpened over recent years as the pool of good, reliable workers has all but dried up, forcing him to explore other labour-saving avenues.

All his tractors had front linkages fitted and he was sure there had to be a way to make use of them to row up grass in front of the baler.

His original idea was borne from an old 5.5m twin rotor Pottinger rake that the farm already owned. This was a mounted model and the process involved cutting the headstock off and welding it on the reverse side of the machine, so the rotors were spinning in the right direction.

Once up and running, the rake was able to row up for the following baler, but with only a small rotor, this meant the baler wasn’t fed with enough material, and although the baler could go quicker the rake wasn’t up to the task so a larger design was needed.

After some research into front rakes, he came across Abimac – a 40-year-old Italian firm that had strong sales on the continent but little experience of selling into the UK.

A hop over to the factory in Turin convinced Mr Smith to purchase one of the rakes and the move has subsequently seen him become the UK importer and sole dealer.

Mr Smith likes the mechanical construction of the Abimac product, which comes in 6m, 7m and 8m variants, all folding to a 2.5m width for road travel.

One of the most striking features of the set-up is that the rake sticks out 2.8m from the tractor’s front linkage.

It makes the baling rig a bit cumbersome in transport and awkward gateways can be problematic, but Mr Smith insists it’s little different in practice from carrying a front-mounted mower.

The biggest 8m rake weighs 1,750kg, but this bulk doesn’t sit solely on the front linkage.

There is also a steering dolly wheel at the end of the main beam, which means the tractor’s top link isn’t required and the weight is balanced between the linkage and wheel.

A 25hp hydraulic motor powers both rotors, so it doesn’t require a tractor with a front pto, either.

When we saw it in action it was coupled to a Case-IH 1455XL that coped with the baler and rake reasonably well, though it did struggle for oil flow when both implements were working hard.

To help thicker swards glide smoothly under the tractor, there’s an angled deflector plate to protect material being snagged on the link arms.

Enclosed cam tracks run in gear oil and require servicing every season – they are manually adjustable by simply removing a hand-tightened screw and tweaking to suit. 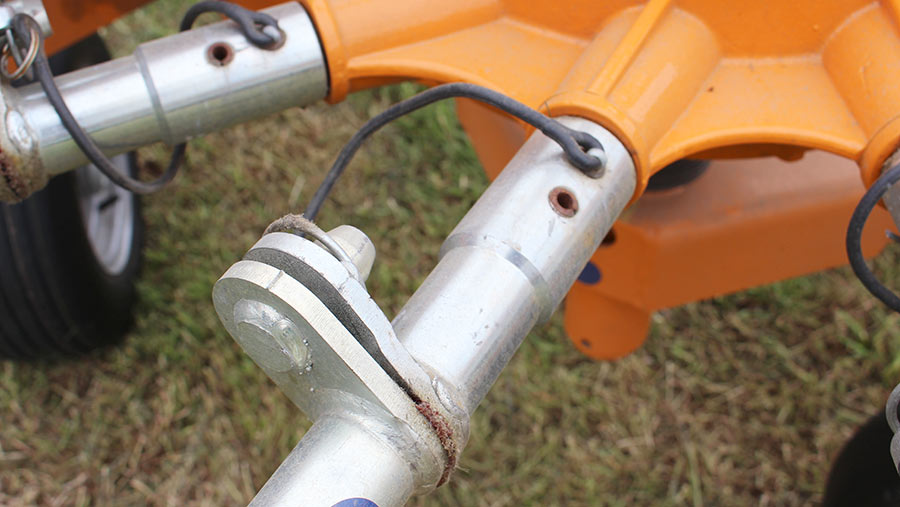 The protection system uses a plastic nylon collar between the hydraulic motor and drive that should fail before any damage occurs.

If not, each arm has has a stub shaft to avoid any further damage. Both rotors sit on four 360deg wheels.

There is various holes along the beam to manually extend the rotors by 50cm on the smallest model and 80cm on the largest 8m, which can be hydraulic on this model. 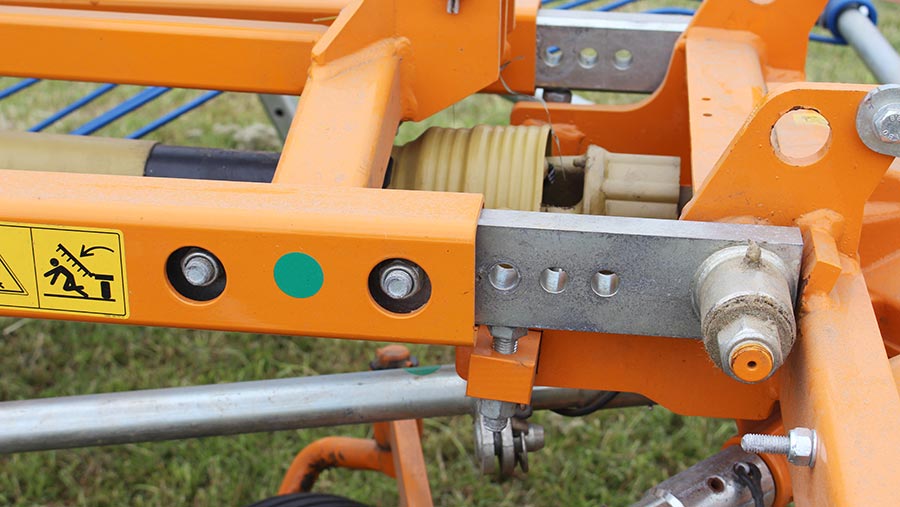 Although impressed when he saw them in the flesh, Mr Smith decided some changes were needed for the machines to be strong enough to withstand UK conditions.

With that in mind, the regular tines have been replaced with heavy-duty versions that are suitable for thicker crops and more unforgiving terrain. 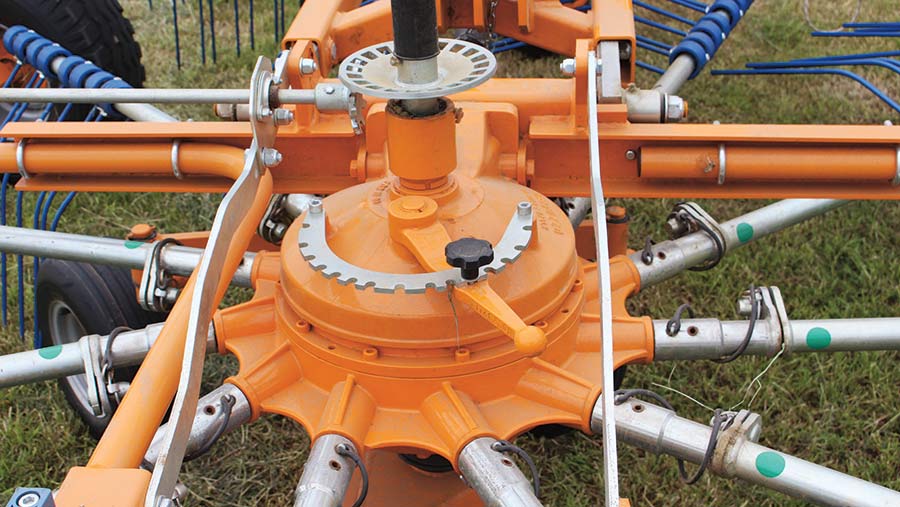 Another big issue was road safety. Hedges and trees blank visibility when pulling out of small gateways, but when an extra 2.8m is added to the front of the tractor, viewing the road safely from the seat is almost impossible.

Mr Smith adds two cameras to the nose of every rake sold in the UK. He wires the cameras into the side lights so they can be switched on and off when needed and then connects wirelessly to the screen in the cab, which just requires a 12V connection.

These are positioned to look both left and right to check the coast is clear before moving off.

There are also flashing orange LEDs under the cameras on the main beam to alert other road users and some forward-facing headlights, as the tractor’s lights are shielded when the rake is folded.

Handily, the rakes come equipped with a number of spares to avoid lengthy down time waiting for parts, including a spare drive coupling, two tine arms and two shearing studs.

New operators are taught to drive as if they are baling rather than raking. However, the set-up does take a bit of getting used to – corners can sometimes take two bites to negotiate and working out how to divide smaller fields comes with experience.

Mr Smith is convinced the output of the rig is comparable to his old set-up, as he is entering the field only once, with one tractor and one person driving, even if forward speeds are slightly down.

Rowing up along a headland is much improved, he says. Being able to see the rake spinning in front of the cab rather than behind has big benefits – not only is neck ache reduced, but small twitches on the steering wheel make instant adjustments to the rake’s position, unlike a trailed unit which takes a few seconds to follow the tractor’s new path.

It is also possible to run the front rake without a baler and row up for following choppers, and there is the option to push two rows into one behind smaller combines at harvest.

This would allow bigger balers to work nearer their maximum and could be a significant benefit for many contractors.