The challenge of keeping the latest high-capacity foragers fed in lighter cuts of grass has forced many farmers and contractors to switch to four-rotor rakes.

Over the years, various manufacturers have stretched the wingspan of their centre-discharge swathers by adding an extra brace of rotors.

It’s rare now to see serious silage operators with anything less than a four-rotor rake and some have even taken it one step further, such as Krone’s monstrous six-rotor Swadro 2000, capable of taking up to 19m of grass in one swipe.

While four-rotor models might be available from several manufacturers, Claas’ Liner 3000 was the first to sell in big numbers.

Launched in 1999, it could cover a 9.9m working width and quickly proved the concept worked as a means of boosting forager capacity.

Liners through the ages

The 4000 followed 10 years later – it was a bigger, more complex machine with larger cam tracks, a preying-mantis-like folding mechanism and the ability to gather up to 15m of grass in one sweep.

Then, in 2011, the 3000 was replaced by the 3500. Though it offered the same working width, it had beefier splined tine-arms (rather than the “lemon tubes” used previously) and the ability to lift individual rotors to deal with angled headlands and obstacles.

It wasn’t long before that was superceded by the 3600. With a redesigned frame for the front rotors, there was no longer any need to remove the uppermost tine-arms to keep transport heights sensible.

It was also Isobus-compatible, so buyers didn’t necessarily have to shell out on a control box, although the lead to connect to the tractor wasn’t a cheap option.

Bear this in mind if you’re looking at a used machine originally sold without a box, as it will be a considerable extra expense if you haven’t already got an Isobus controller. These four-rotor Liners have now been on the market for more than 20 years.

A new model could set you back anything between £50,000 and £65,000 and Claas remains keen to push them as a means of upping chopper output.

However, as they’re typically viewed as a contractor’s machine, there isn’t necessarily a huge demand second-hand. So, if you’ve got a big enough tractor and the field sizes that will accommodate it, you’re in a buyer’s market and there are bargains to be found.

In addition to the obvious advantages in output that their wider working widths bring, four-rotor rakes can help foragers, balers and forage wagons maintain decent chop quality thanks to their ability to present a decent-shaped swath, even in light crops.

Care and attention needs to be paid to how it’s done though as there’s nothing that will annoy an inherently grumpy chopper driver more than a ropey old row of grass (See “A knotty issue”).

Of course, their extra width also means there’s less traffic across the fields and the tug tractor will be clocking fewer miles. That said, they’re not for everyone – narrow lanes and small field sizes will inevitably limit appeal.

To get an idea of what you need to look out for in a second-hand swather, we sought expert advice from the team at Claas Western in Frome, Somerset – one of the biggest outlets for four-rotor Liners.

First, and most obviously, look out for bent tine arms. These are purpose-made to fold on impact at the point ahead of where they slot into the section carried by the cam-track.

It’s a feature Claas says is designed to protect the delicate internal workings of the rotor hub. Replacements come in around the £90 mark.

Grab hold of each tine arm to assess it for wear between the splined shaft and the outer sleeve. Expect a bit of play, but anything more than 50-70mm at the shaft end needs further investigation.

Excessive slop means the arm drops with each revolution, resulting in the tines digging deeper than they should and causing soil contamination.

There is a re-sleeving kit, which involves fitting short outer arm sections, sleeves for the inners and new spring clips. At £5,367 for a full rake’s worth (48 arms), it’s less expensive and time-consuming than stripping the rotor head down and replacing each arm.

The over-centre spring clips that secure the arms in their splined slot can wear at the point where their folded shoulders pass through the mounting points.

If not spotted, they will break off and shed the arm in question into the swath, before inevitably being found by the forager or ending up in a bale. Replacement spring clips are £19.33. Busted or buckled spring clips can also be caused by frost damage.

If rakes are stored outside and folded up, water can run down inside the tube and, when it freezes, can pop the tine arms out of their splined slot, damaging the clips. Replacements for broken and missing tines will cost £9.36.

With the rake unfolded, turn each rotor and, at the same time, twist each tine arm.

If they rotate further than they’re designed to at that given point in their cam cycle, or if there is any clunking, it indicates the cam-track may have significant wear or have sustained damage. 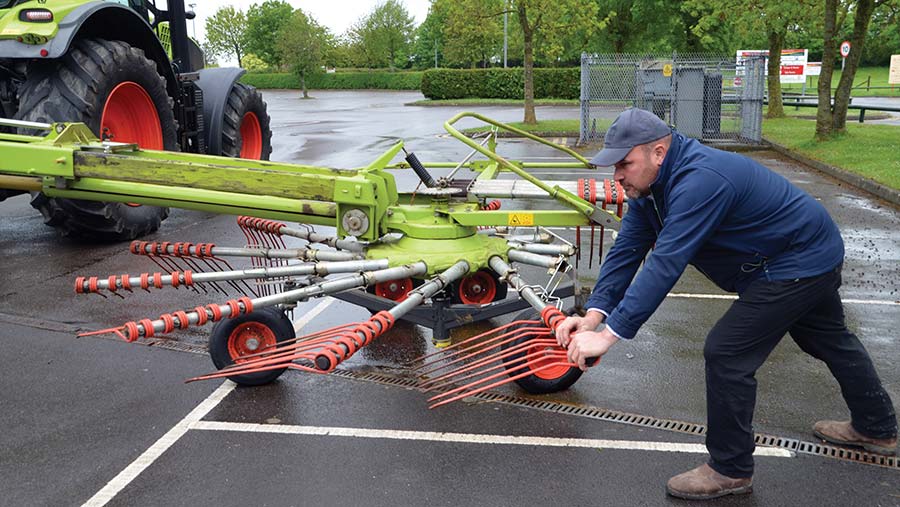 They’re usually pretty bomb-proof and rarely give trouble, but it’s worth pulling out the Allen-headed stud in the top of each rotor head to check the oil level and condition.

It’s not uncommon to see a bit of weeping around the point at which the tine arm shaft joins the cam-track. 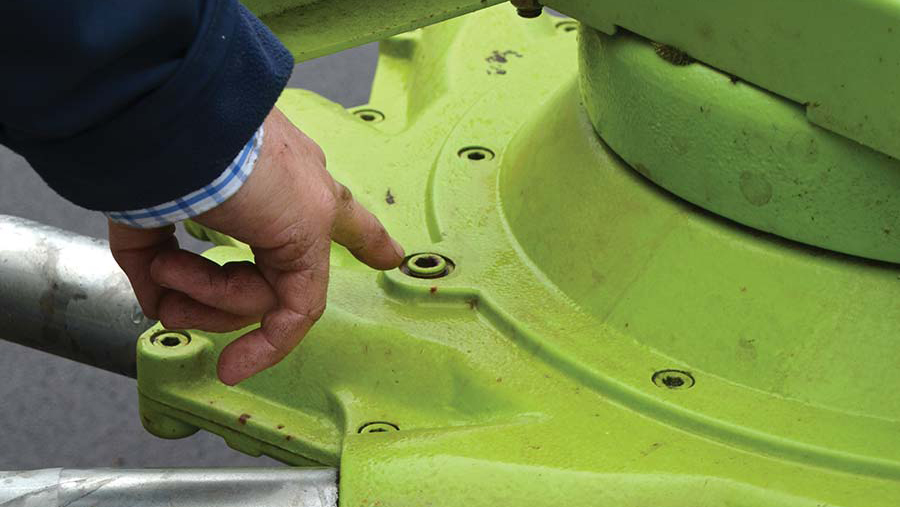 It’s not uncommon to find the reservoir filled with semi-fluid grease as a short-term means of limiting lubricant loss. 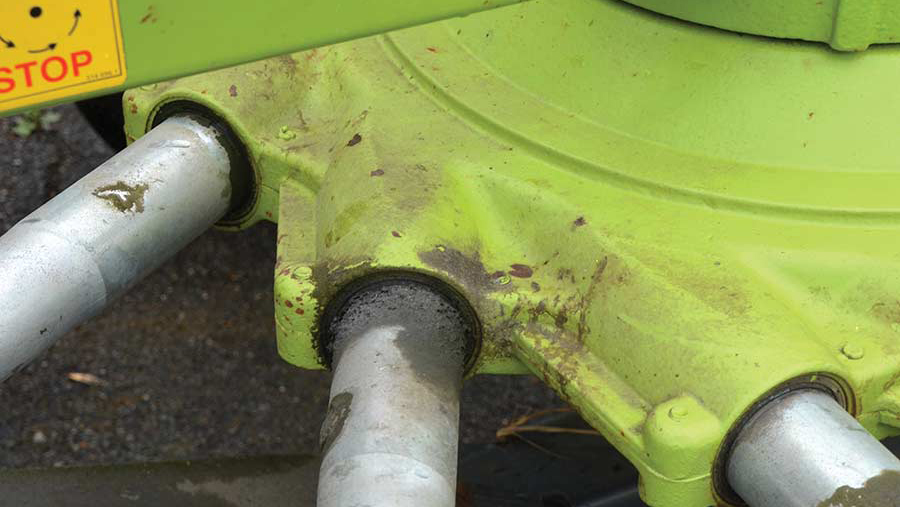 Fabricated from a mix of folded flat bar and box-section, the rotor carriages have a simple coil spring arrangement at the beam pivot that pulls the front up at an angle when the carriage is lifted.

This means that, when lowered back into work, the rear wheels make contact with the ground first in a “jet-effect”, avoiding damage to the tines and excessive digging.

The threaded bar that locates and tensions the coil spring can shear off, so it’s not uncommon to see baler twine employed as a make-shift spring retainer. 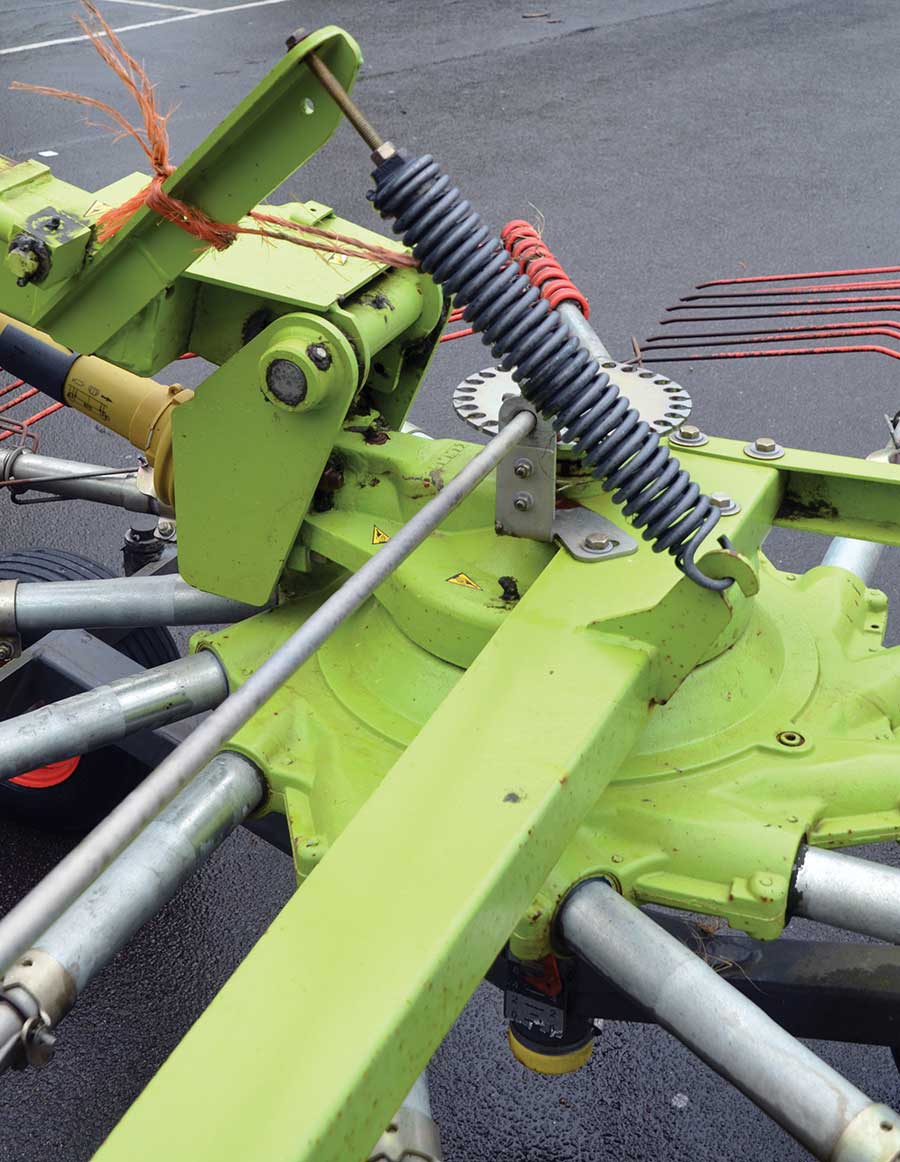 Inevitably, the carriages’ swivelling castor wheels suffer wear. Check the bearings for play but also the pivot bushes – it’s an easy fix that will soak up a fair bit of slop.

The carriage frame itself is put under a reasonable amount of duress and can crack in places, particularly the box-section cross-members. Look out for welding here, as it’s not always done in the most sympathetic manner. 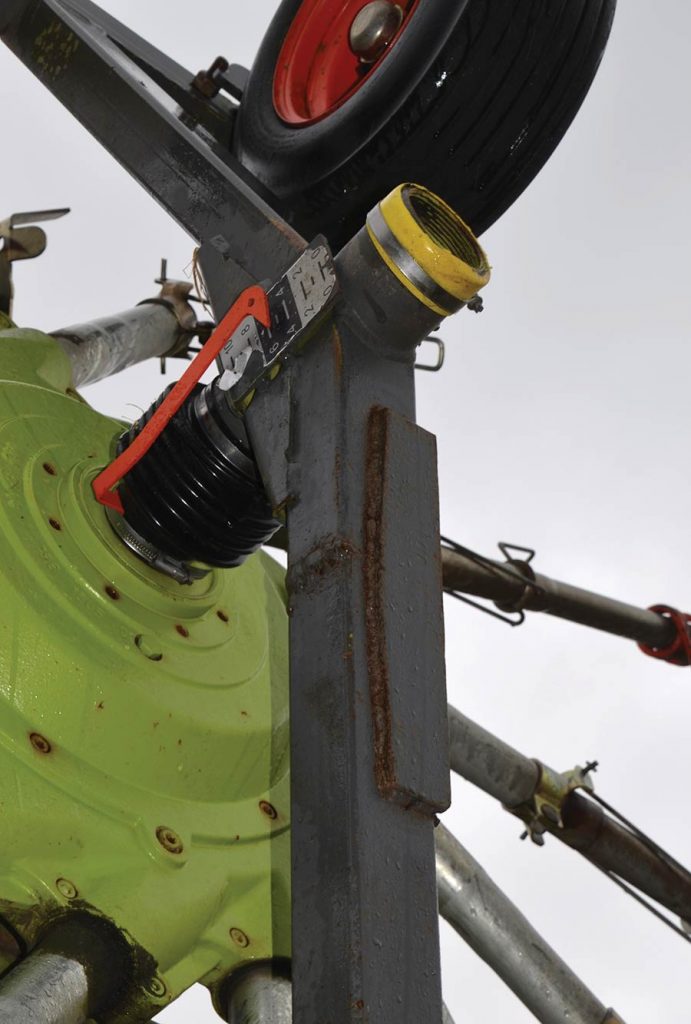 By the nature of their job, four-rotor Liners will have a fairly hefty workload and stress fractures are not uncommon.

The main beam forms the backbone of the machine and carries the entire weight of the rake. This is all transferred to the transport wheels when the rotors are lifted out of work.

The plate around the bushes, housing the two pivot pins that link the chassis to the axle, had a tendency to crack on older models.

Later versions had an offset circular plate welded on at this point to take the strain – check for any cracks or repairs. 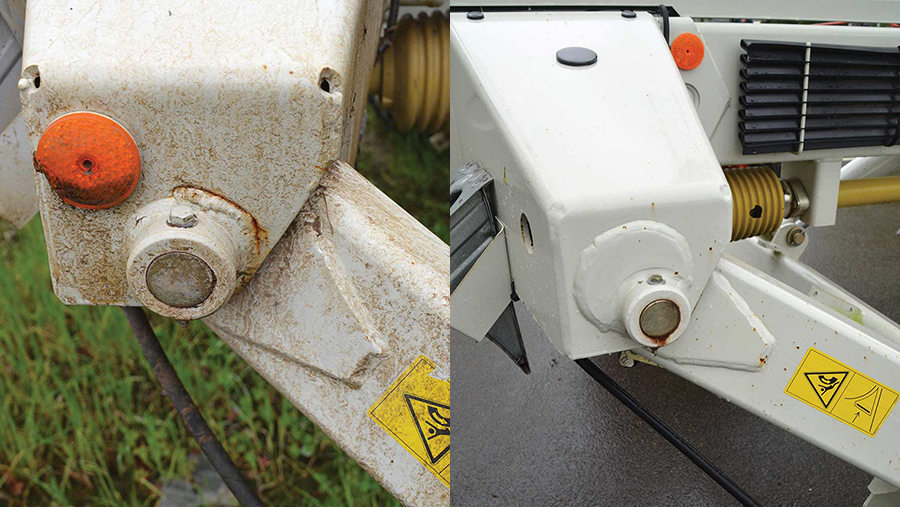 Likewise, check the area around the point at which the axle joins the vertical box-section uprights. Although gusseted, these can often crack. 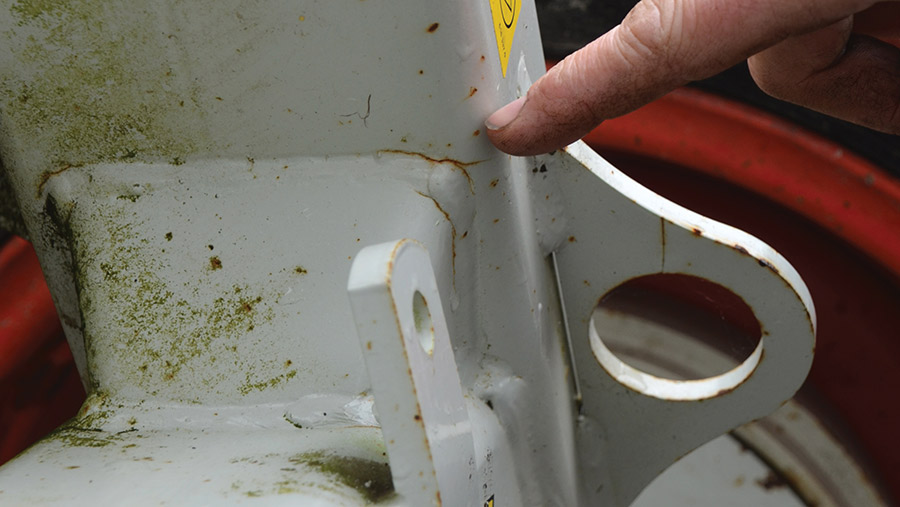 At the headstock, inspect the vertical beam that houses the first pto carrier bearing, as over-zealous operators turning too tight can catch them.

Repairs are often evident at the point where the upright joins the main beam. 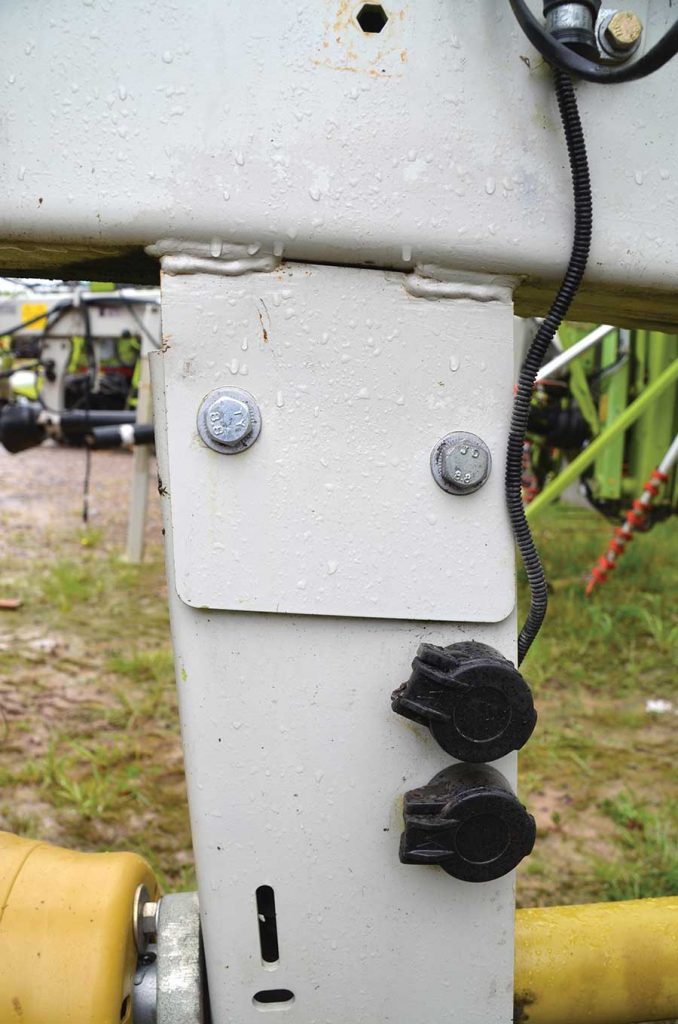 To get a true picture of how well the whole machine works, it is essential to couple it up to a tractor. Most Liners can run their essential functions via a closed centre load-sensing hydraulic system to avoid using one spool-valve set on constant pumping.

However, if the tractor isn’t geared up for this then it’s possible to switch from one mode of operation to the other by lifting the cover on the main beam that houses that valve chest – just twist the labelled knurled knob. 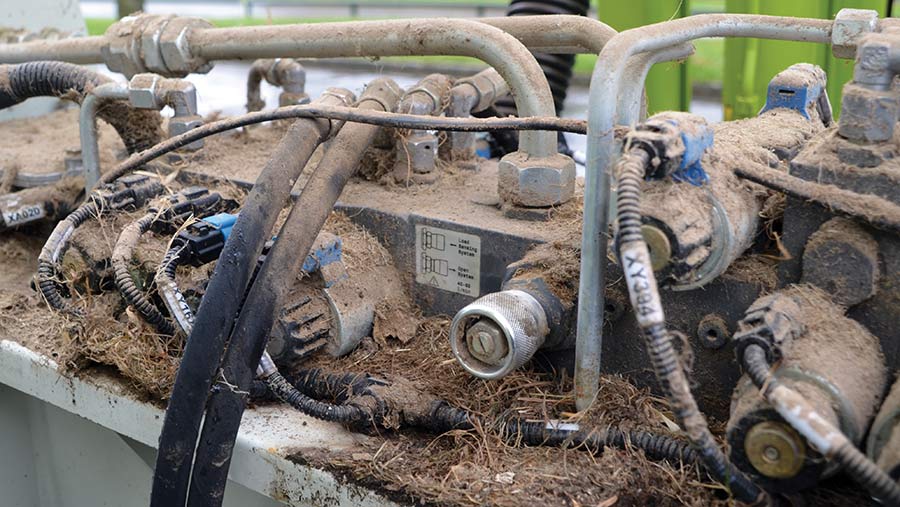 There are various control box options. Most Liners go out with the basic blister-pad panel with buttons and LEDs to toggle through all the main functions (icons make this fairly self-explanatory – transport/work mode, front rotor width) and a pair of plus/minus buttons to tweak accordingly. 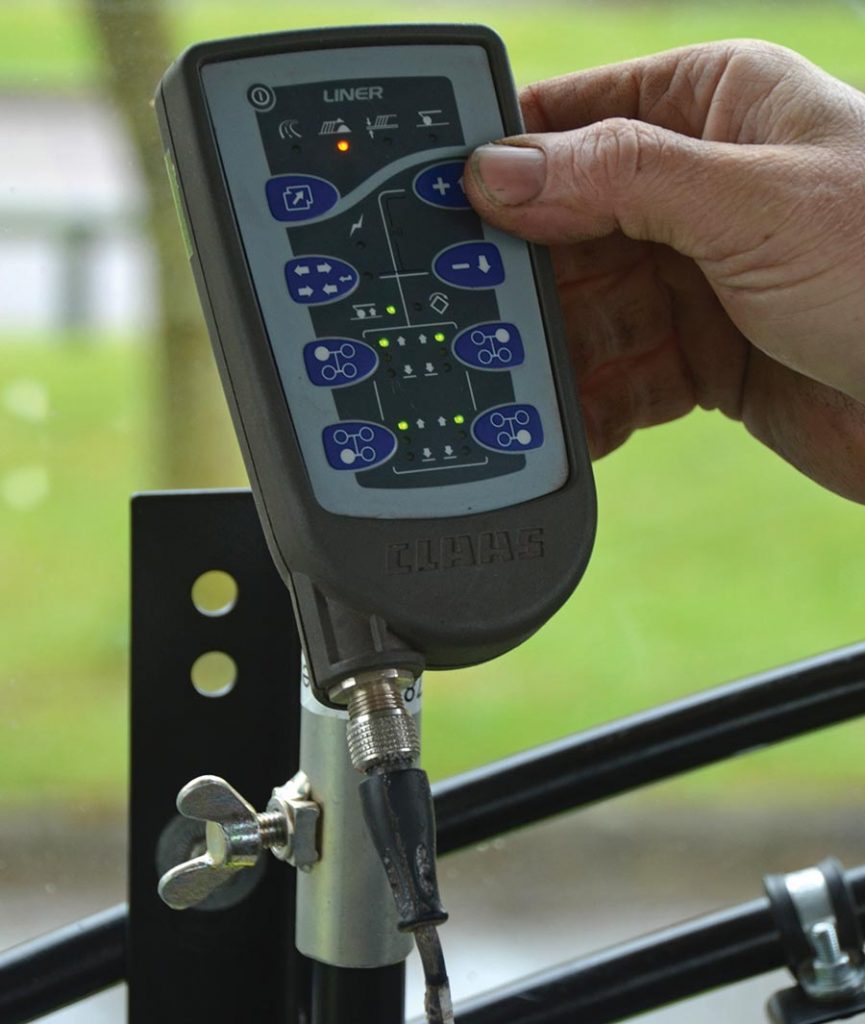 There is also the option of Claas’ black-and-white Communicator display – a £1,000 extra when new. As an alternative, all post-2014 machines have the ability to run through an Isobus controller.

Rotor position is monitored by potentiometers on the fold points. These tell the control box when they have reached their predetermined height for headland turns.

If they’re required to lift higher to clear big-crop swaths, it’s possible to work the control panel buttons in a set sequence outlined in the manual. 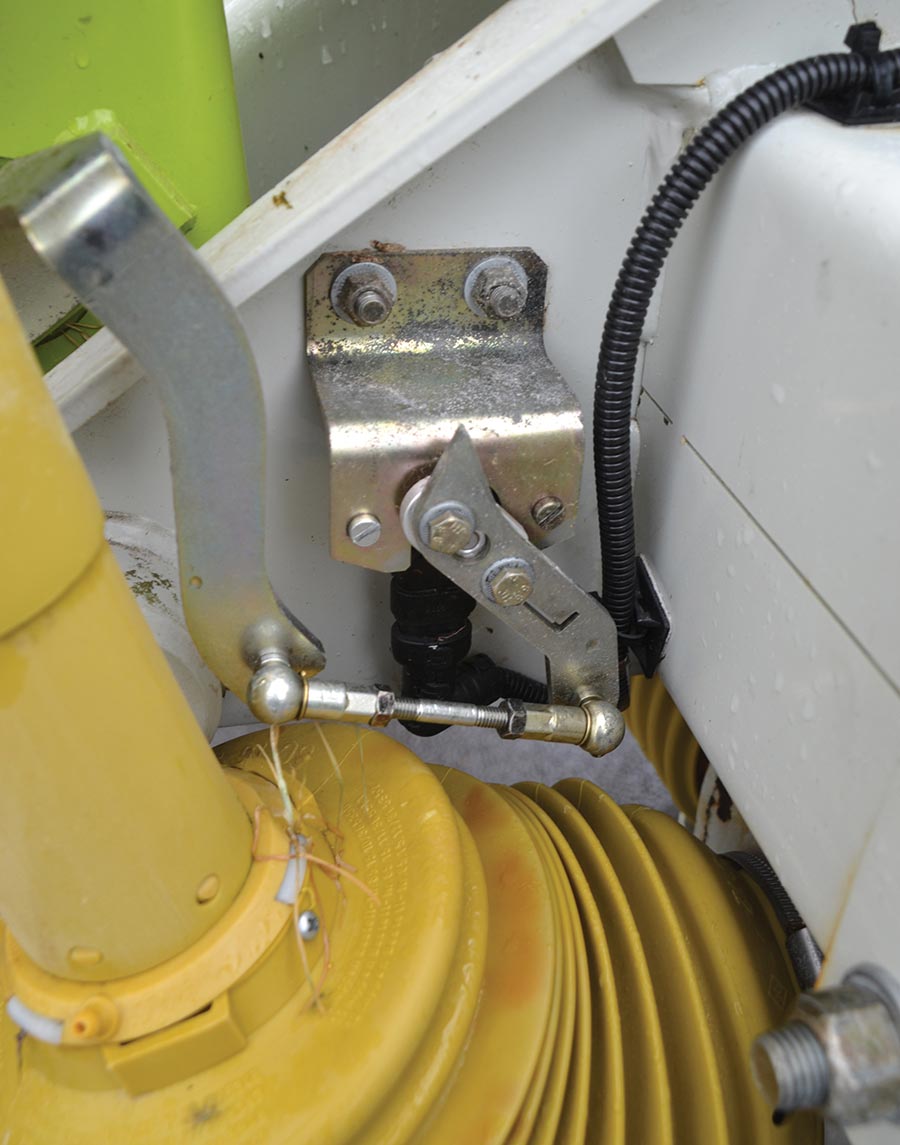 With oil flowing to the valve chest, check everything folds, lifts and extends out as it should. While the electronics can play up, more often than not it’s the dry telescopic beam wear pads and pivot pins that will be the sticking point.

Hydraulic Height (HH) control provides operators with the opportunity to tweak rotor height from the comfort of their armchair.

If the rake in question is fitted with this option, check that the sensors give the control box an accurate reading. If it has got manual height adjustment, check the winder handles run smooth. Underuse means they will get sticky or seize up. 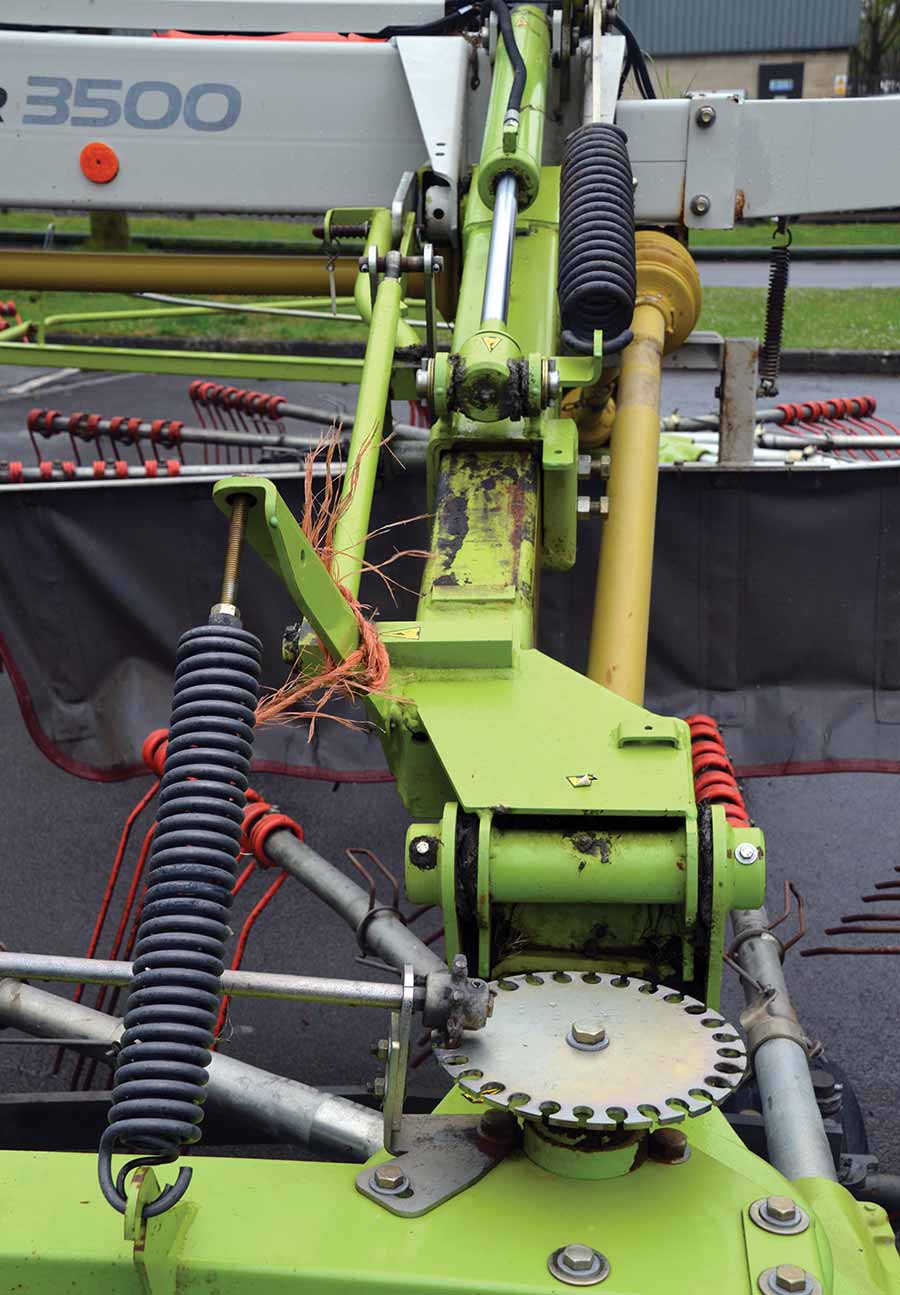 Here are a few examples of four-rotor Claas Liners at dealers dotted around the country: 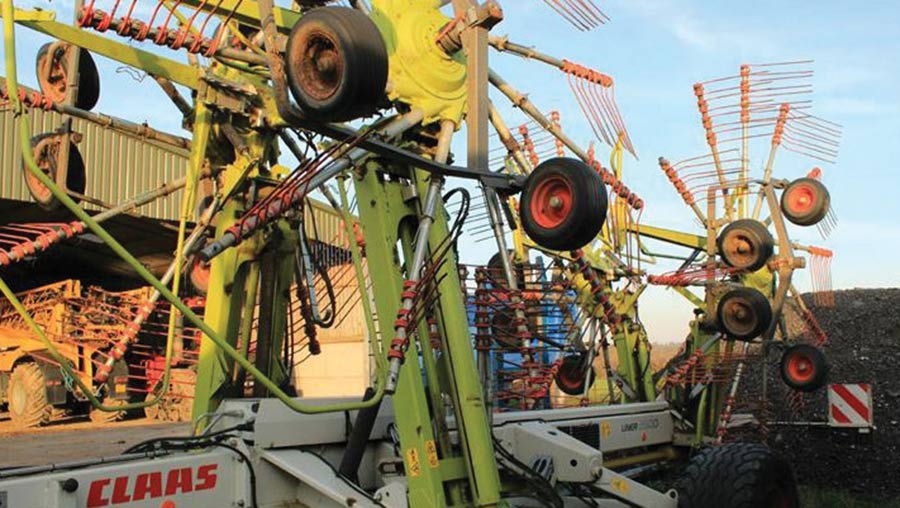 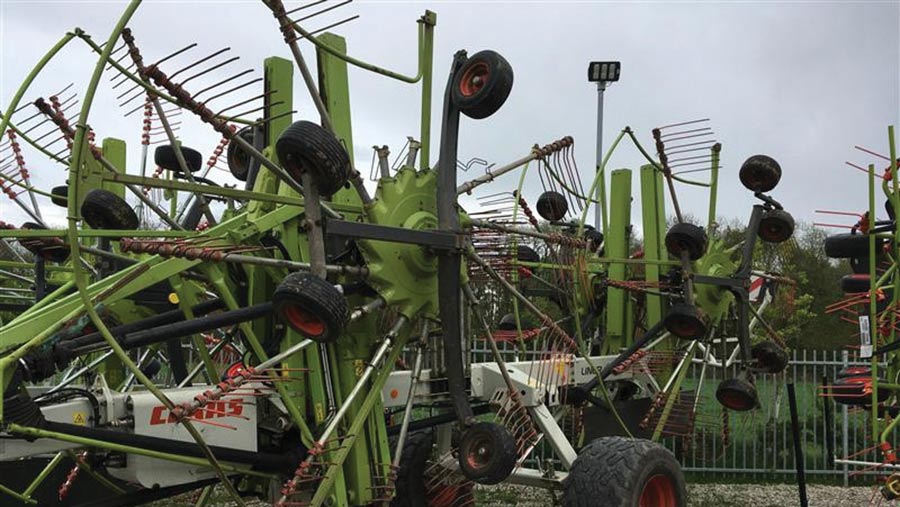 Anyone that has spent much time behind the wheel of a forager will know the agony of following a single-rotor rake bundling one swath into another to try to build a decent row. The usual result is a heavily-knotted rope of grass that brings the chopper to its knees.

In some ways, the four-rotor rake has the potential to create the same headaches – the material is gathered by the leading tine-arms then swept into the swath again by the rear rotors.

To counter this issue, two manufacturers have come up with alternative solutions. Kuhn uses hydraulic rotor drive to enable operators to tweak tine speeds to avoid the bundling effect.

It also helps simplify the driveline as there’s no need for a complex series of shafts to get power out to the rotors.

Pottinger takes a similar approach but uses a conventional pto drive to the rear cam-tracks to provide a fixed rpm and hydro motors over the front rotors to offer variable speeds.

A selection of other four-rotor rakes on offer at the time of going to press: 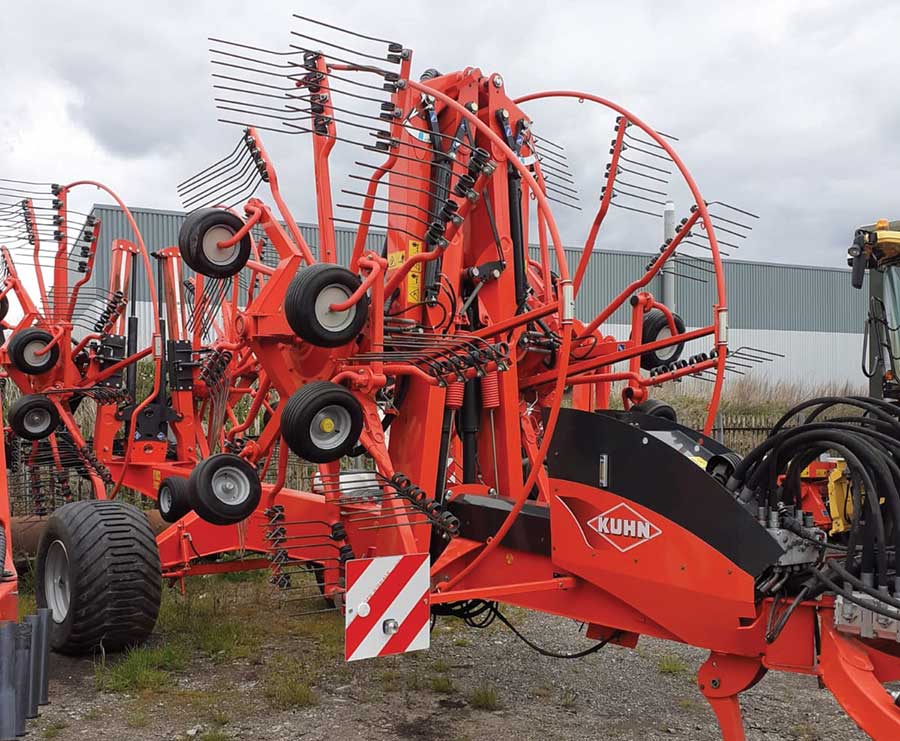 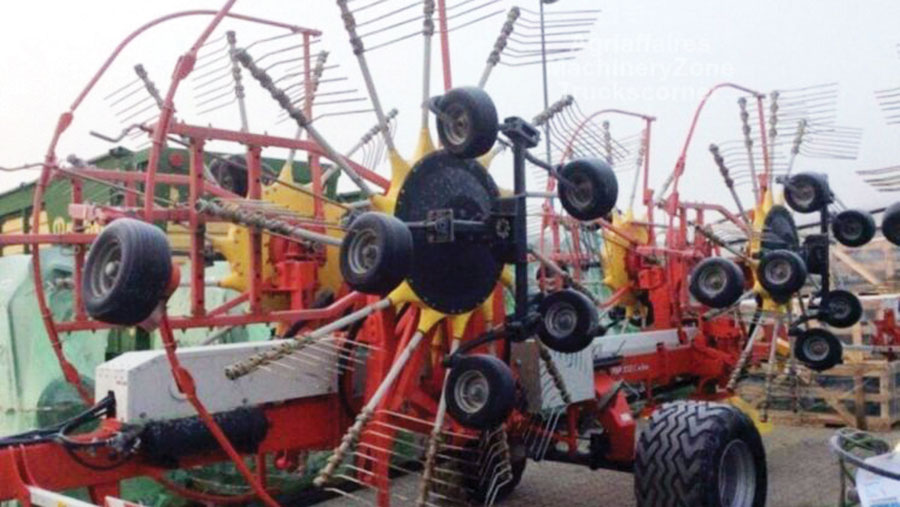 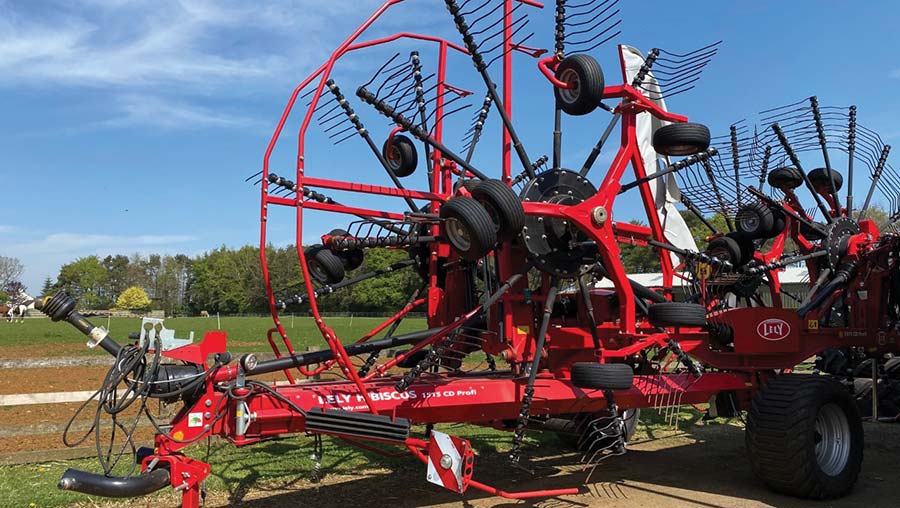 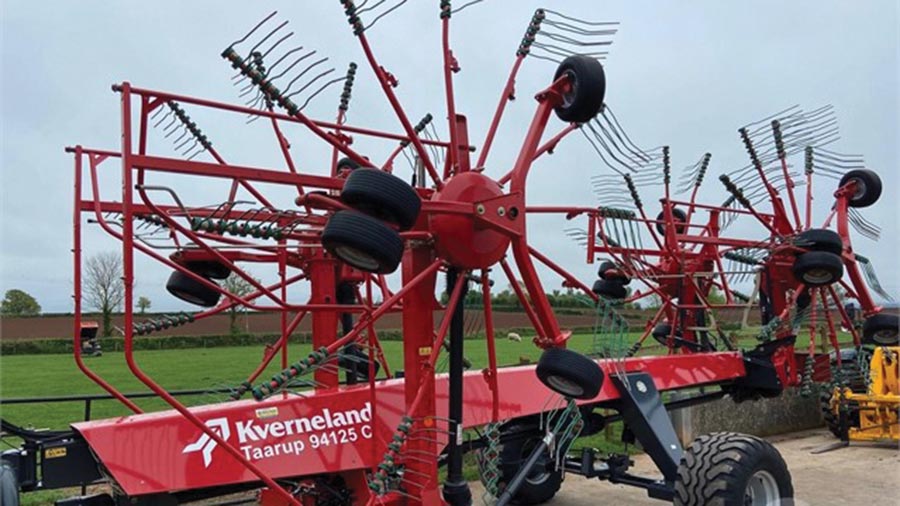