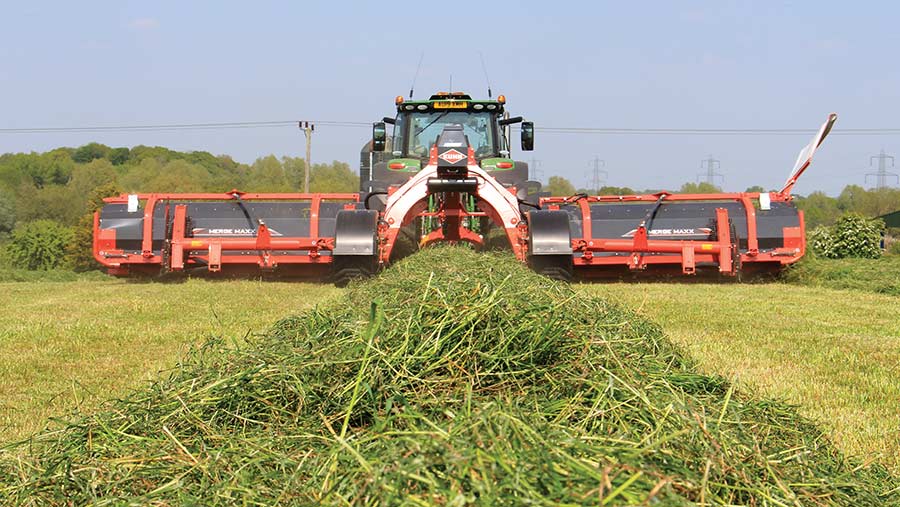 Kuhn’s Merge Maxx burst onto the scene at Agritechnica 2017, offering farmers an alternative method for rowing up crops in front of foragers and balers.

One of the first to put in an order was Norfolk contractor Dick Barnes, who swapped a twin rotor rake for a 9.5m Merge Maxx.

The machine is now going into its second season with the busy contracting outfit, so we asked Mr Barnes how it has fitted in and if he has any regrets about buying one.

What did you have before?

We had a Kuhn twin rotor 9.5m rake that was a good machine and served us well, but due to our flinty soil, there were quite a few stones creeping into the swath.

This was not only having a negative impact on the quality of the crop, but the annual bill for wearing forager parts was alarmingly high.

The flints were really tearing the internals to bits. We were going through multiple sets of knives per season along with shear bars and spout liners.

Why did you look at a merger?

The land we farm and contract on is a 25-mile radius around Forncett St Peter in south Norfolk, so we encounter everything from light land full of flints to reclaimed marsh on the Norfolk Broads. Our main aim was to stop pulling stones into the swath.

I’d been on the search for an alternative to a rake for around three years, and after seeing the Merge Maxx at Agritechnica in 2017, I put in my order.

Kuhn didn’t think there would be much interest from the UK and my eagerness must have caught them out as I didn’t actually get the machine until early 2019.

Did you look at anything else?

Yes, we looked at a four-rotor rake before buying the merger. We wanted something bigger than our twin-rotor to make meatier swaths on the lighter second and third cuts, as the chopper was working below its capacity.

However, the extra rotors meant the length of the machine increased quite a bit and we felt this would have been awkward when travelling along some of the narrow lanes.

Though the merger hasn’t got a steering axle like the four-rotor rake, we don’t feel it needs it. The beds are 3.5m long so, including the drawbar, it’s far shorter than a big rake. 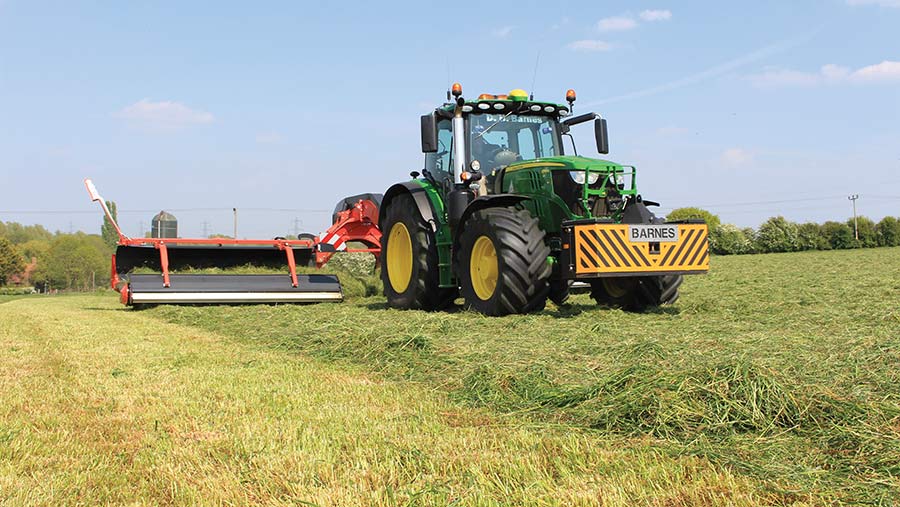 How was the first season?

We carried out a lot of work for energy companies last year, so the merger was kept busy. This season we have dropped a bit of that work to focus more on beef and dairy farms.

The biggest thing we have benefited from is the merger’s versatility. We can easily bring 9.5m of crop into one row on heavy 6t/ha first cuts, which is more than enough for the Claas Jaguar 970.

For lighter second and third cuts, as well as lucerne crops, we can bring the width down to 7.5m to form a continuous belt and throw one pass from each side into a 3m row, effectively raking 18m into one swath.

We also merge straw in front of balers at harvest and shutting it down to a 7.5m row seems to work well.

Does it take some getting used to?

The only time you have to be on your game is the short works as the merger moves grass sideways rather than just out the back.

I’m the main driver and I sometimes have to think about how the land work will meet with the headland to avoid having odd strips. It doesn’t take long for it to become second nature, though.

We contract nearly 300ha of marshland on the Norfolk Broads which is very undulating. We mow and merge through dry ditches and the suspension system on the merger seems to cope with it fine.

It is a little heavier than the rake, but is mounted on the lower link arms and we’ve yet to find the extra bulk an issue.

We still have a rake for times when we need the merger in two places, such as straw baling and later silage cuts. 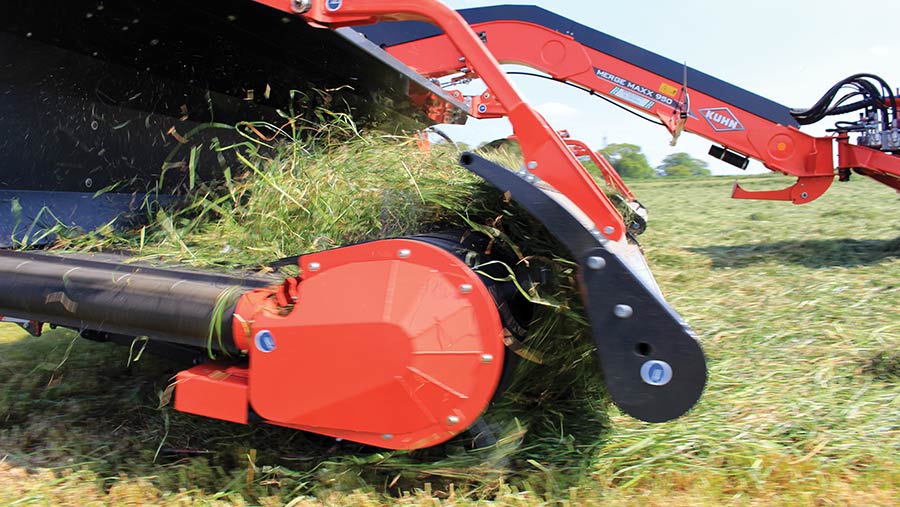 How does output compare to a rake?

Tractors burn a bit more fuel running the merger, as they have to power the belts and pickup reels. That said, our John Deere 6155 is more than adequate and we could probably get away with 120hp.

The extra fuel use is offset by the increased output. We can happily glide along at up to 8ha/hour with the merger, whereas the 9.5m rake would be flat out at 4ha/hour.

It’s most noticeable in lucerne – the merger will fly along at 12kph and doesn’t miss a leaf as the reels act just like a forager, while the rake would have to plod along at 6kph to pick it all up.

We’ve noticed that drying times of the swaths are a little more uniform. The windrow is slightly fluffier due to the grass being laid down from above, rather than forced together from either side.

And, because the rows aren’t as tight, the air can pass through them better.

In the first cut of grass we saved a set and a half of blades, which equates to nearly £7,000 in parts. Throw in labour and downtime and the merger is already saving us money. Running one chopper, we can’t afford downtime when the weather is good.

Being able to keep the forager fully fed by making bigger rows has also meant the merger can comfortably stay in front of the chopping team. 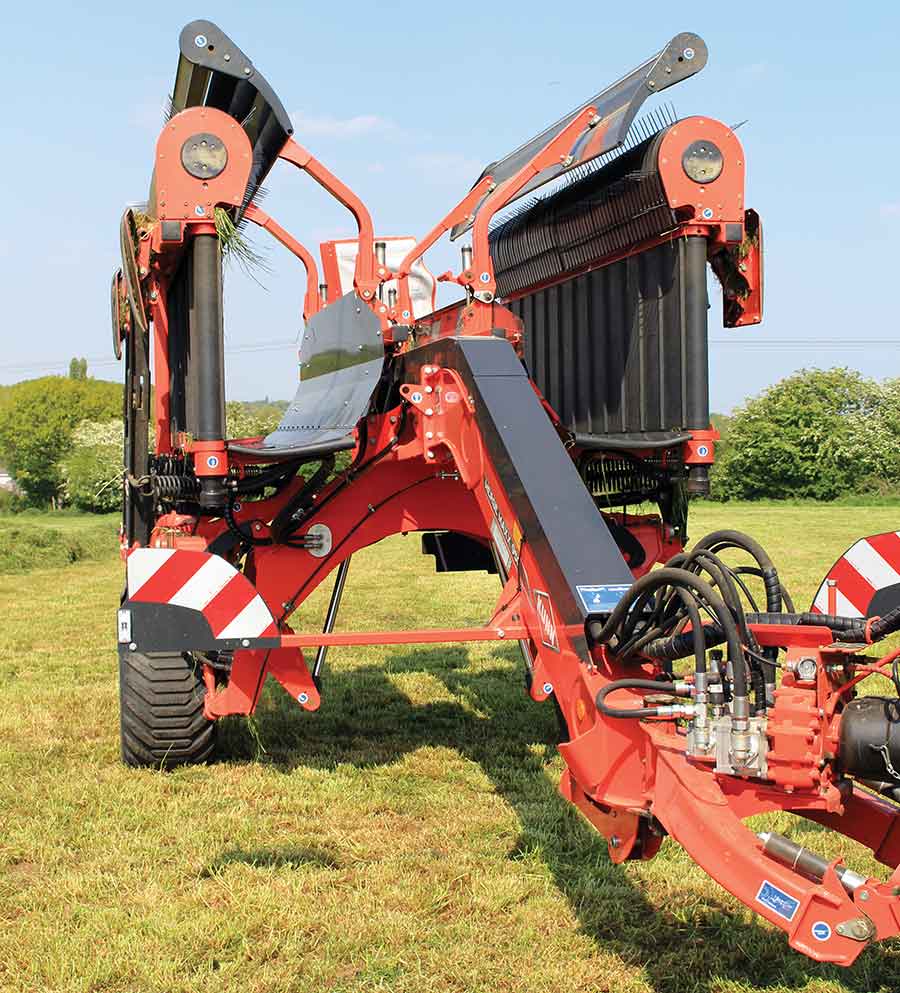 Maintenance is similar to a rake, with skids and pick up tines the main items. We had it in the workshop this winter and after 1,500ha we only needed a couple of skid covers and 9 pickup tines.

One gripe is that there are a few awkward grease points on the belts, but luckily these are only 50-hour intervals.

Kuhn added a few modifications this year to stop grass build-up between the belts and tines. The crop had a tendency to drag on the tines and not make it onto the belts, particularly in damper crops, but they fitted a plate in the gap so hopefully this won’t be an issue this year.