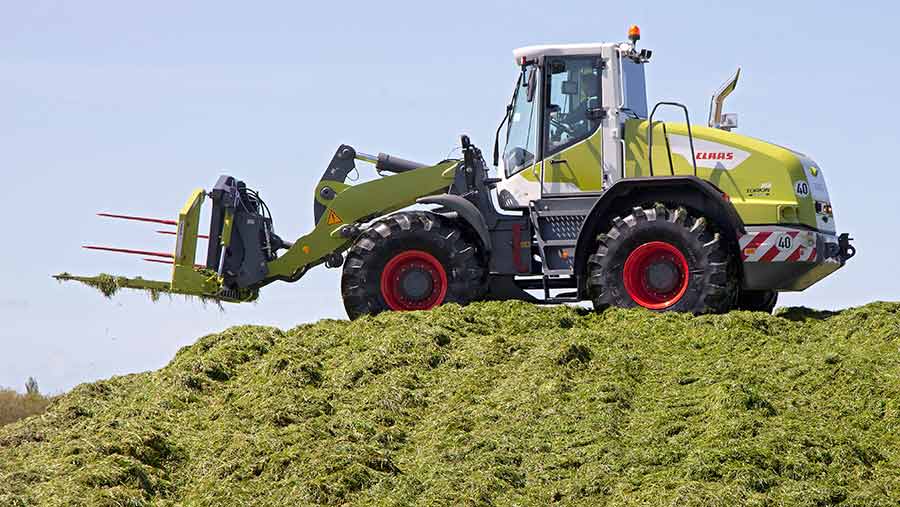 High-horsepower foragers were making pretty light work of the showground’s grass crop. New Holland, John Deere and Fendt all had their choppers at work, as did Krone with its new Liebherr-powered Big X 780.

The Swiss engine maker also builds Claas’ new range of Torion loading shovels, which were beavering away on the nearby silage clamp.

Other highlights included an old John Deere 6030 pulling a forage box on the Kverneland stand and an unusual system for sheeting silage clamps.

Vintage horsepower is guaranteed to pull in the show crowds as Kverneland found when it hooked this 1972 John Deere 6030 to one of its latest KV10040R forage wagons. There was plenty of black smoke to show for its efforts, but the 213hp, six-cylinder up front had ample power for the job.

Somerset-based Warthog Machinery has something of a reputation for putting together seriously well-built bespoke bits of kit.

The latest example is this ultra-heavy duty buckrake. It stands 2.7m wide and weighs 1850kg to help with clamp consolidation. One key concern for the customer was visibility, and so it’s been designed with that in mind. In addition, the push-off frame runs right to the end of the 50mm square-section Hardox tines, ensuring the fork doesn’t carry any grass back down the clamp.

Price for this heavy-duty version is about the £6,000 mark, although the lighter standard model comes in slightly cheaper.

Heavy ring-press clamp compactors have become commonplace with many silage gangs across the UK and now they’re starting to become a bit more clever. This one from German firm Saphir has a 1.2m fold-down press arm that can be used to roll the shoulders of the clamp.

A double-acting ram with gas accumulators means it can generate up to 900kg of downforce. In addition, the machine has a 700mm hydraulic side-shift function that means the rolling tractor is kept well away from the side of the heap. The unit itself weighs 3.25t empty, but plugs in the box section frame and roller mean it can be water ballasted to more than  4t.

The other key difference, according to UK importer Suffolk Farm Machinery, is that the press rings are kept narrow (20mm). With 225mm spacing, they cut down through the surface layers to consolidate at depth.

The only trouble is that all this bulk requires a tractor of at least 250hp up front – and there’s an equally hefty price-tag to match, £12,500. For those without such big budgets or as much power on tap, a lighter version is available that comes in closer to £9,000.

Grassland UK provided the first working demo of Claas’ new Liebherr-built Torion loading shovels. Two models were working on the clamp – the 18t 1812 and the 15t 1511.

The larger has a true lift capacity of 6t and 230 litres/min hydraulics while its smaller sibling can handle 5t and has 170-litres/min oil flow. Both run on 750/65R26 rubber, but that’s where the similarities end.

The lighter machine employs a 167hp John Deere engine to drive a twin-pump Bosch Rexroth hydrostatic transmission and Dana Spicer axles while its bigger brother gets its muscle from Liebherr’s own 195hp motor and has a hybrid mechanical-hydrostatic CVT drive much like a Fendt Vario, with ZF axles putting power to the ground. Claas says to expect prices to come in close to similarly specced JCB shovels.

Although not mainstream grassland tackle, this B1001 sawmill from Swedish firm Logosol attracted plenty of attention. Capable of dealing with logs up to 1m in diameter, it uses a 23hp V-twin Vanguard petrol engine to power a ripping band saw, turning tree trunks into usable timber.

At present only a static version is on offer but later this year a mobile version will be launched with electric loading and log turning functions powered by a rechargeable battery pack. For now the static version comes in at £7,995.

A nifty new silage sheet system aims to take the hassle out of closing off a clamp and improve the quality of the forage inside.

Agritec Silage Safe from German firm Huesker is made up of a series of 2m-wide webbed sheets that are draped over the sides of the pit walls before filling starts. At the base of each of these there’s a length of perforated pipe, which when connected together act as a drain for any rain water running down the sides of the clamp.

Once the sheets are in place, the standard silage sheeting is installed and filling begins. When the clamp is full the woven sheets are dragged over the top, before being pulled tight using a belt-and-ratchet system connected to steel pipes slotted into the fabric.

The ratchet itself has a long lever so the installer has enough leverage to really crank up the pressure.

According to Huesker, the system creates even pressure across the top of the clamp and ensures there are no air pockets. It’s also considerably quicker than humping hundreds of tyres around, and allows the clamp to be quickly reopened to add another layer.

The sheets are stored in a crate that can be lifted up to the clamp on pallet tines and Huesker says they have a life span of at least 10 years.

Prices vary slightly depending on the quantity ordered, but on average it works out at £8.72 per sq m.

Kit options for getting a fresh grass crop into shallow, stony soils are fairly limited, but Maschio reckons it has hit the mark with its rotavator and seeder combination.

The two-part outfit is designed to stir up a thin, fluffy tilth in old leys or cereal stubbles ahead of the piggybacking air seeder and is a far quicker way of getting seed down than anything plough-based, according to UK importer Opico.

There are several Maschio rotavators, ranging in width from 2.1m to 3.1m and in power requirements from 60hp to 250hp.

On top is a standard air seeder with basic electronic calibration, variable-rate sowing and the ability to broadcast or band sow. A rear packer is included too, which improves seed-to-soil contact and breaks down any remaining clods.

Canadian outfit Anderson reckons it has solved the age-old quest to speed up silage bale collection by doing away with the telehandler or tractor loader.

The 12m-long RBM Pro uses a clever claw to grab wrapped bales from the ground and hoist them on-board without tearing the film.

The arm sits stationary in relation to the ground as soon as a bale is detected to avoid scuffing the plastic, while the tractor and trailer continues to trundle steadily around the field. It’s also able to swivel to collect bales that are laid on their sides.

Anderson reckons typical loading time is about 20secs per bale and the controls run through a Danfoss touchscreen in the tractor cab.

Maximum capacity is 20 bales, with two rows of seven topped by a single row of six, and the whole lot is unloaded by tilting the trailer rearwards and pushing them off with the headstock.

The trailers are sold through Lincolnshire contractor D Clifford & Sons and the asking price is about £47,000.

The thrum of the new BiG X 780 at full chat drew in the crowds to Krone’s Grassland stand.

The updates were focused on operator comfort, so most of the internals remain the same.

That includes the six pre-compression rollers that help serve up a blockage-free crop flow and drum that comes in a 20-, 28- or 36-blade format. There’s also a biogas drum with 40 or 48 knives for extra-fine chopping.

There’s also a new armrest-mounted 12in touchscreen and the option of Krone’s slightly wacky-looking Lift Cab that uses a scissor lift to hoist the cockpit 70cm upwards, providing a better view over tall maize crops and into silage trailers.