The process of mowing, raking and tedding was in focus at this year’s Grassland event, with all the big names showing their take on the silage system.

Italian firm Abimac caught the eye with its novel front-mounted rotary rake, while Kuhn, Reiter and SIP were promoting the virtues of merger units over standard rotary rakes.

Film-on-film silage wrapping was also in the spotlight, with several firms now doing away with the traditional net base layer in order to improve silage quality.

Grassland debutant Avimac was showing off a time-saving way of rowing up grass or straw ahead of the baler.

Its butterfly rig runs on the tractor’s front linkage while the baler is towed behind, completing two passes in one and avoiding rowed-up crop getting soaked by a rain shower before the baler reaches it. 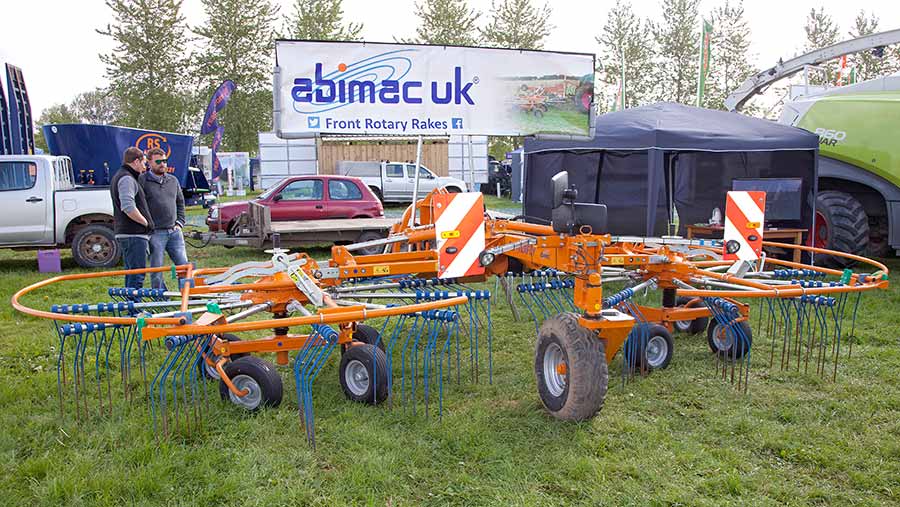 The kit is built in Turin, Italy, and comes to the UK via North Yorkshire farmer and contractor Simon Smith, who set up Abimac UK 18 months ago.

There are three models in the twin-rotor range that vary in weight from 1,250kg to 1,750kg, have power requirements of 110hp to 130hp, are all 5m long and run on a weight-bearing front wheel to help follow ground contours.

Merger machines are yet to take off in the UK, but Kuhn hopes its redesigned Merge Maxx 950 will spark some new interest in the concept.

Unlike the sweeping action of a rake, these implements pick the crop off the ground and shift it sideways on an elevator belt. The theory is that this prevents contamination from soil, stones and other unwanted detritus, as well as producing a more uniform swath. 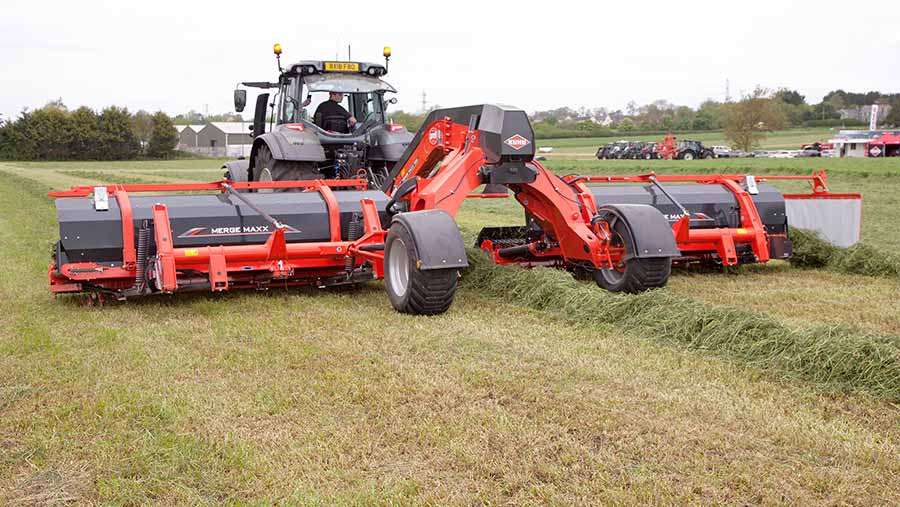 One of the downsides has been the premium price, but Kuhn has simplified the design of its latest model, making it easier to build and, crucially, cheaper to buy.

With a list price of £65,356 it is indeed getting more competitive with some of the larger four-rotor rakes.

As for performance, the trailed Merge Maxx 950 can gather in a maximum width of 9.5m with its pair of pickup and merger belt units. These can be configured in several different ways, allowing it to produce windrows either in the centre of the machine, on the left and right sides or a combination of all three.

Each of the pickup units has a roller at the front to smooth crop flow, before the cam-track pickup flicks the material onto the rubber merger belts. The whole system is hydraulically driven via the machine’s own pto-driven pump.

Slovenian manufacturer SIP has been making rapid progress in the UK mower market since debuting at last year’s Grassland and Muck event in Stoneleigh.

It now offers a pretty big range that includes the front and rear combo in action at the show, as well as bigger butterfly triples. 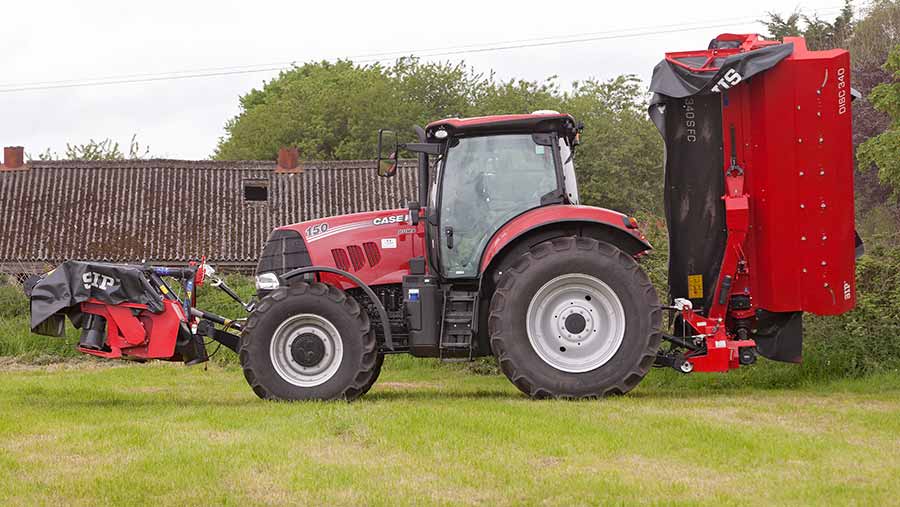 The company was also demoing one of its mergers on the site. The front-mounted Air 300F is built under licence from Austrian company Reiter and uses many of the same components. However, the frame and hydro-pneumatic suspension system is an SIP design.

Like Reiter’s own machine, it has a roller at the front that guides the crop to the flexible camless pickup. A finger rotor then flicks the crop onto the rubber conveyor belt, which can be set to deposit the material on the left or right side of the machine.

All components are hydraulically driven and it requires a minimum oil flow of 60 litres/min. Working width of the front-mounted machine is 2.95m and a larger 5m trailed will be available soon. This can work independently, or be teamed with the front unit.

Case was one of several companies showing off a baling unit that uses plastic film rather than traditional net wrap.

The company reckons this provides a better oxygen barrier to produce higher-quality silage, even when it’s stored for a long time.

The fixed-chamber RB545 Silage Pack is also fresh from a redesign that has seen access to the film rolls improved, rotor cutter knives strengthened and wrapper table belts lengthened. The quarter-turn option has been tweaked too, allowing bales to be dropped perpendicular to any slope. 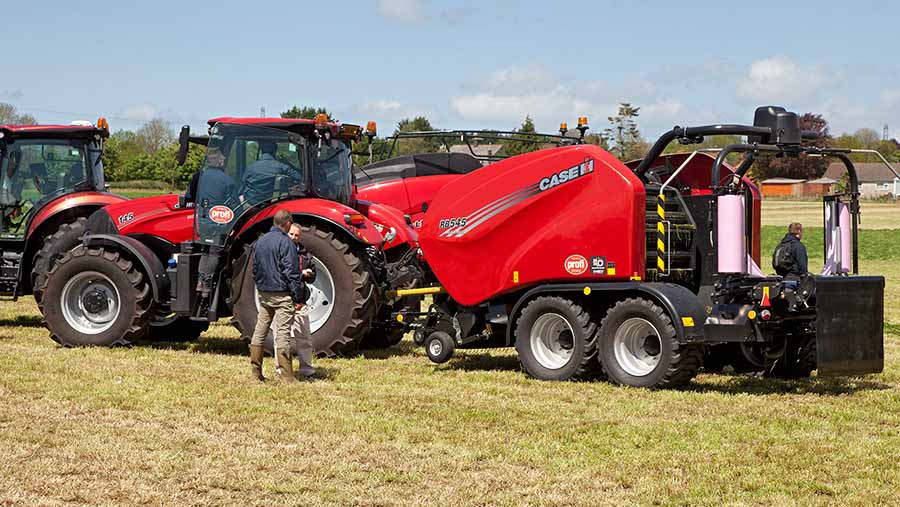 The Silage Pack was being towed by a Maxxum 145 Multicontroller, which was returning to work after its record-breaking performance at the German DLG testing station.

It notched the lowest specific fuel consumption ever recorded by a four-cylinder in the PowerMix test, which was more than 9% better than its nearest competitor (apart from sister firm New Holland, of course).

The gearbox was launched at last year’s Agritechnica event and offers eight speeds in each of three ranges, sitting between the company’s more basic 16-speed semi-powershift and the stepless setup of the CVX.

This setup has a maximum cutting width of 10.2m and comes with the firm’s Quattrolink suspension system. This has a vertical working range of 700mm , which apparently helps maintain constant ground pressure over undulating terrain. 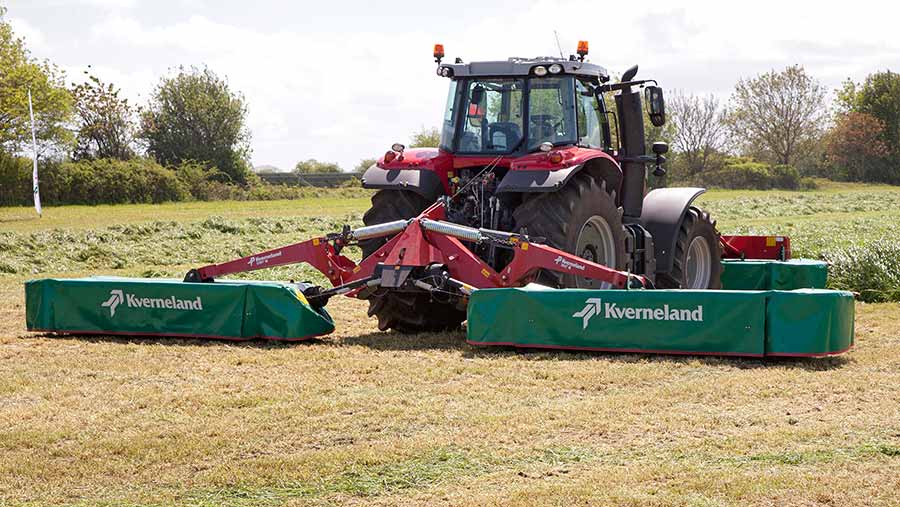 There is also the option of a Geomow full Isobus system with section control. This automatically lifts and lowers individual mowing units at the headlands and offers automatic adjustment of overlap too.

The most recent round of variable-chamber balers from John Deere have been treated to a few updates to improve their performance in different crop conditions.

These include a larger-diameter pick-up and one-piece in-line auger rotor for improved intake and crop flow. For quicker clearance of blockages, there is also a full-width drop floor. 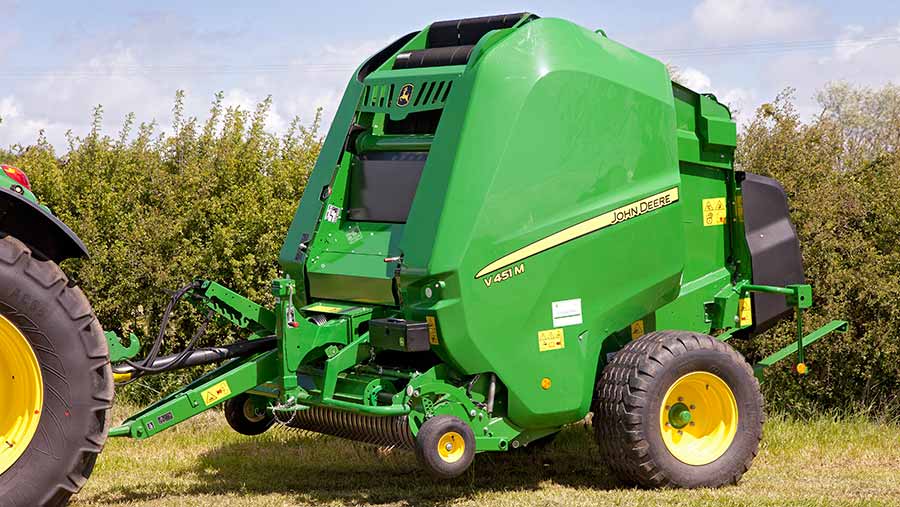 Elsewhere, the V400 range has been given a general beefing up, with a heavier-duty frame, bigger drive chains and larger roller bearings. Ultra-tough Hardox steel tines have also been used in the rotor.

The bale density system has been reworked, too, and they come with the option of net-only or net and twine wrapping.

For the 2018 season, Kuhn will be offering film binding on its FBP3135 Intelliwrap combination baler.

Unlike some other machines that bind the bale with a separate roll of full mantle film, the Kuhn system uses two rolls of standard 750mm bale wrap. 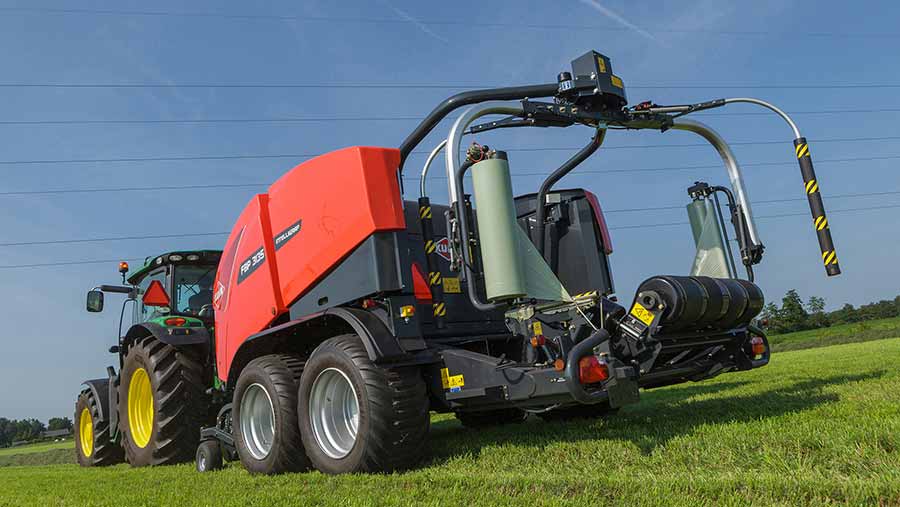 This approach is apparently cheaper and faster, as the narrower film feeds into the chamber more quickly. Tying or binding is done with four layers, before the bale drops onto the 3D wrapping table.

At the moment Kuhn recommends applying the standard six layers of film, but it says there is potential to drop this to five in some situations.

Fresh off the boat from New Zealand, this Maxam mower has a few unusual tricks up its sleeve.

Two- and four-drum versions are available and have wilter rotors that catch the grass as it comes off the blades, spreading it out to the full working width of the machine. 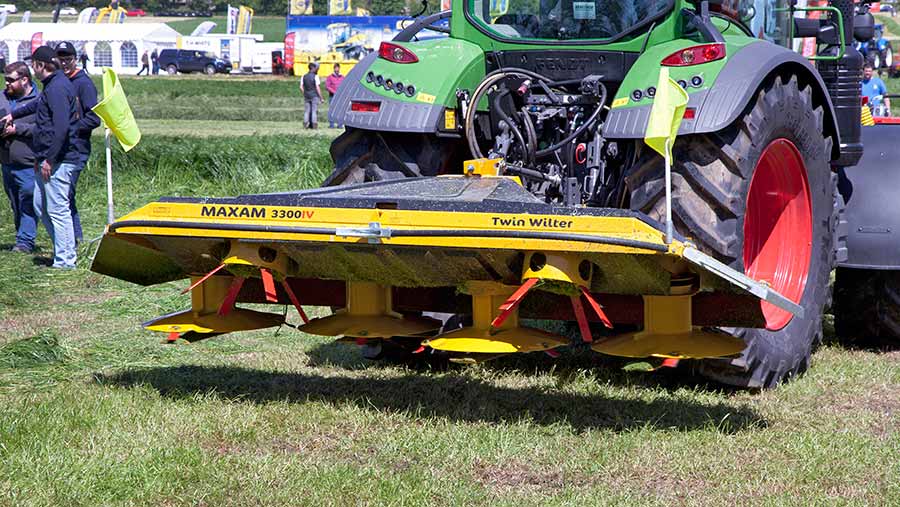 Although offset versions are available, Maxam says its in-line models are the most popular because of their simplicity. Running down the grass you’re about to cut is no issue, according to the company, as cranked blades and slightly angled drums lift laid crop with little issue – looking at the demo plot of importer Suffolk Farm Machinery, that certainly seemed to be the case.

All the elements are entirely belt and pulley driven, making for a very low-maintenance, quiet-running gearbox-free setup. Power requirement for the 3.3m model is 90hp while the two-drum 2.5m version requires just 70hp. Prices start from £7,500.

Pottinger has only been building round balers for four years, but already those that are out there are gaining a reputation for performance, according to the company.

Both fixed- and variable-chamber versions of the Impress combi are available with a 32-knife chopper unit that will reduce fibre lengths to 36mm. 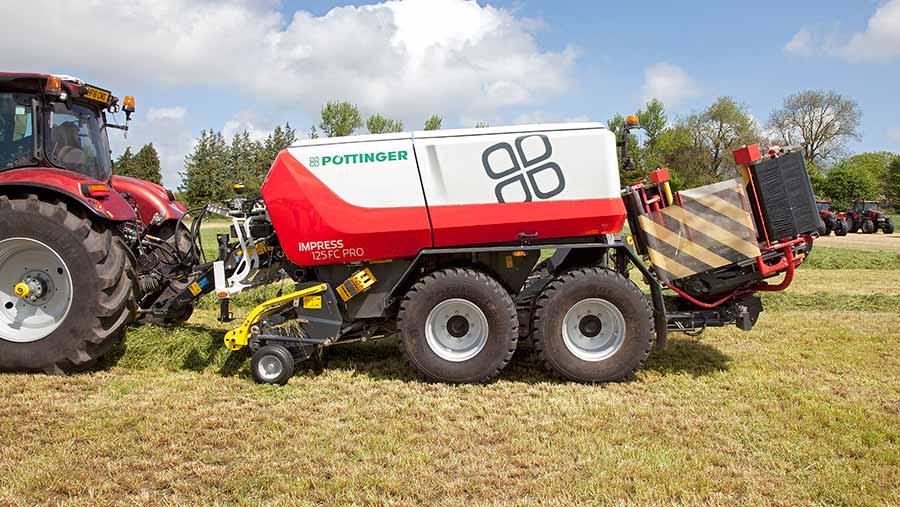 A novel wrapper arrangement with underslung – rather than overhead – satellite arms is used to apply the film. With a slew ring underneath the table, there is said to be a lot less stress placed on the whole machine, particularly when travelling at pace across bumpy ground.

Being based in the Alps, the other area the company has concentrated on is bale transfer on slopes. Between the bale chamber and the wrapper is a receiver cradle that slides on rails between the two. Initially it stabilises the bale and then travels rearwards and upwards to place it on the forward cranked table. Once in position, the wrapper levels out and the film arms start to spin.

This approach is said to do away with the issues of getting bales from the chamber to the wrapper on both uphill and downhill slopes.

Prices are yet to be set, but expect the Impress combi to come in at about a similar figure to the obvious competition. Two different spec levels are available with virtually every function automated and the company is currently working on a netwrap free film-on-film system.

Vicon’s mounted mower-conditioners have had a revamp that sees a return to race car-type suspension and a clever parking system that makes it possible to store the machines upright.

Both 3.2m and 3.6m models are now suspended from the centre of the bed and employ a four-link parallelogram frame with pivoting ball-ends in each tie-rod to provide 3D contouring in all planes.

As ever the mowers are equipped with Vicon’s trademark tri-blade discs, each of which is now designed to shear a shaft should an obstacle be encountered, avoiding costly damage to the gears.

Three flip-down legs with gas struts mean it is possible to unhitch the mower in a matter of seconds, leaving it in its upright folded position.