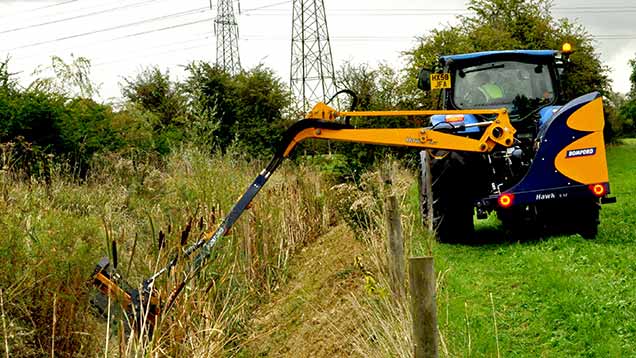 The Bomford company’s pioneering approach to power farming dates back 150 years or more to the early days of steam cultivation when Benjamin Bomford bought a set of cable ploughing equipment for his farms in Worcestershire.

Steam powered cultivation was still regarded as a high-cost novelty in the 1860s when the first cable ploughing equipment arrived on the Bomford farms, but it was evidently a success because it was soon joined by a second set and Benjamin owned at least five sets just a few years later.

As well as cultivations and drainage work on his 2,000ha (5,000 acres), he also used steam equipment in his contracting business.

By the 1890s the Bomford business was making equipment to use with the steam engines.

This included earth scoops for drainage and dredging work plus scarifiers for the steamrollers they used in a new road maintenance business, and both were so successful they were bought by other contractors.

The contracting and manufacturing business separated from the farming activities in 1904 to form a new company called Bomford & Evershed.

Products included a threshing machine designed by a company they had taken over, gapping hoes for rowcrops and about 20 tractors powered by a Morris car engine.

Contracting activity expanded and at its peak the equipment included about 50 steam and diesel rollers working on highway maintenance work, but machinery making remained small scale.

This changed in the 1950s when the contracting activity was shrinking while machinery production expanded, including a mounted reversible plough achieving about 1,400 sales.

Scraper and snow plough blades were also available, but the major successes that took Bomford & Evershed into big league machinery making were an expanding hedgecutter range and the Superflow cultivator.

Hedgecutters were available from 1949 and, with an expanding selection of toppers, verge mowers and mulchers, they form the vegetation control sector which remains easily the company’s biggest product range.

Production of Superflow cultivators started in 1961, developed by the company with the tine and point design based on data from the National Institute of Agricultural Engineering at Silsoe.

The Superflow was the start of a successful range of tillage machinery that also included the Turbotiller seed-bed cultivator and the Dyna-Drive ground driven twin-rotor cultivator, and a red painted version of the Superflow was produced sold by Massey Ferguson.

The Turner company, which manufactured mowers and other vegetation control equipment, was taken over as part of an expansion programme and the company was renamed Bomford Turner.

Another takeover in 1993 made Bomford Turner part of the American-based Alamo Group.

Although the company is best known as a manufacturer of hedgecutters and other vegetation control equipment selling in the UK and in a long list of export markets, an important development last year was the reappearance of the ground-driven Dyna-Drive twin-rotor cultivator in the product range.

For a company that has achieved so much success with cultivation equipment, this could be an area for further expansion in the future.