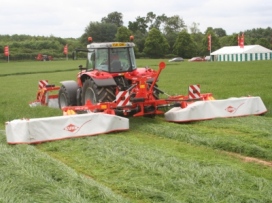 Growing interest in non-conditioning mowers was reflected in a number of new machine launches at the Grassland & Muck event.

Running the near-9m Kuhn GMD 8730 rear-mounted ‘butterfly’ unit together with a front mower on a 160hp tractor illustrated the power and weight savings that comes from eliminating the conditioner.

“Running costs are lower because the reduced power requirement consumes less fuel and the machines cost less to buy in the first place,” said Robert Garthwaite of Kuhn Farm Machinery.

“Spreading the crop speeds-up drying anyway, so in good weather that isn’t much of a disadvantage, and no additional operation if you’re going to row up swaths anyway.”

“If you’re growing lucerne or swards with a large proportion of clover, tined conditioning systems can be a bit too aggressive,” he said. “We’ve supplied a few crimping roller mowers but mostly producers opt for no conditioner at all – in which case they can use a wider, more productive machine because of the power and weight advantage.”

“It’s based on a lighter-duty frame than previous versions to further reduce weight,” said Robert Garthwaite. “Rear mower spacing is adjustable so that maximum cutting width is available for long, straight runs.

“But for mowing curves in irregular-shaped fields the rear mower spacing can be narrowed,” he added. “That increases overlap between the front and rear mowers to avoid missed strips.”

The 3.88m NovaCat 402 and 4.3m 442 have hydraulically-adjustable pressure control and novel linkage levelling to counter the offset weight of the machine in its working position.

Hydraulic folding to the rear and safety break-back are included in the £13,355 list price of the NovaCat 402.

* See more stories, pictures and video from Grassland and Muck 2011.