Based in the heart of dairy country in North Devon, Battledown Contractors concentrates specifically on servicing the needs of the region’s many livestock enterprises.

The company is run by the Dymond family, who are dairy farmers themselves and know the value of producing decent quality home-grown forage.

“We don’t push our own cows overly hard and try to rely as much as possible on good grub grown here rather than lots of bought-in feed,” explains Rodney.

“But to do that we have to regularly refresh our grass leys – something that happens on a fairly regular basis thanks to our rotational wholecrop and maize. 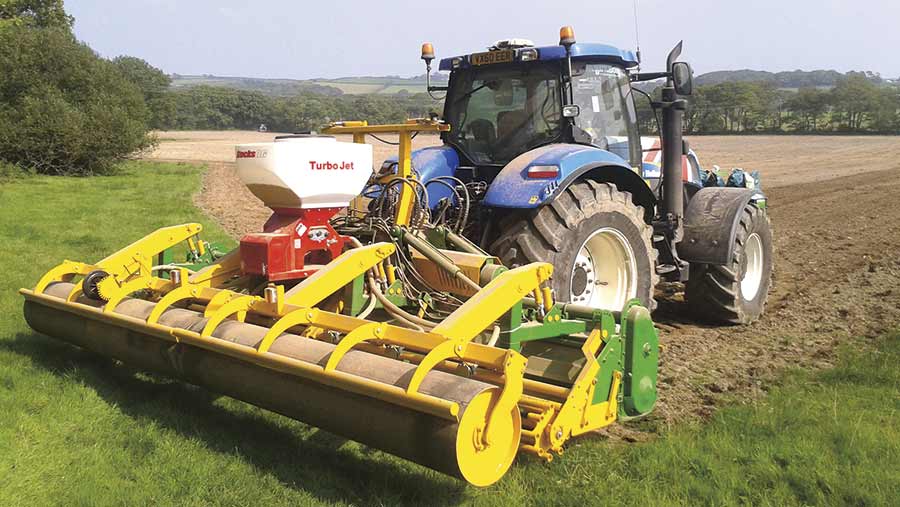 “It’s always been a pretty time-consuming, diesel-hungry job involving ploughs, power-harrows, cultivators and rolls but we felt it was worthwhile effort given the grass would be in for at least three years and very often a lot longer.”

However, being contractors the Dymonds always have an eye on improving the efficiency of their operations.

So when Rodney saw a new one-pass reseeding machine in Farmers Weekly five years ago he began to reconsider the business’ approach to establishing new leys.

See also: What’s in Your Shed? visits a Buckinghamshire contractor

The core of the Wecan Rotaseeder is a standard rotovator built in South Korea, along with various ancillary fitments that turn it into a one-hit reseeding rig.

Most obvious is a Stocks TurboJet seeder piggy-backing over the double rear rollers, the first being a cage roller, which creates shallow corrugations.

Seed is then blown on to the surface and the following flat roller levels out those gentle indentations, ensuring decent seed-to-soil contact across the full width.

There are various optional extras including pan-buster tines and following harrows should they be required.

“Previously, we would get stuck in with the plough then power-harrow, drag harrow and roll as many times as it took to get a decent seed-bed.

“After that we’d spin on the seed, drag and roll once more, which meant reseeds could take over a week.

“We could see the Wecan could slash that. But we didn’t want to do half a job so there wasn’t any point in buying the standard rigid 2.8m wide machine. We wanted a folding setup that could really cover the acres.”

Fortunately, Wecan UK had a 5m Rotaseeder in stock which arrived with the Dymonds in autumn 2015. Since then, it’s been used to establish more than 300ha of new leys, in autumn and spring. 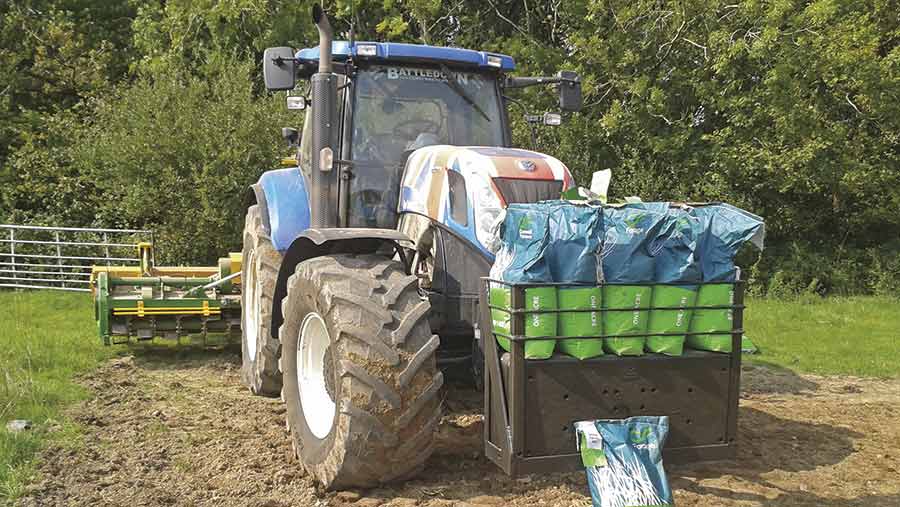 While the list price for the big folding machine with all its extras stands at close to £40,000, running costs are considered to be low.

Where the old approach was reckoned to be costing about £225/ha, the one-pass rig is now charged out at between £111-£123/ha, depending on soil conditions and the depth it is required to work at.

In its two and half seasons the Wecan has got through two-and-a-half sets of tines in the process.

With replacements costing £78/m, that works out at £3.85/ha in wearing metal costs. However, there is a difference in wear rates between different blade types. 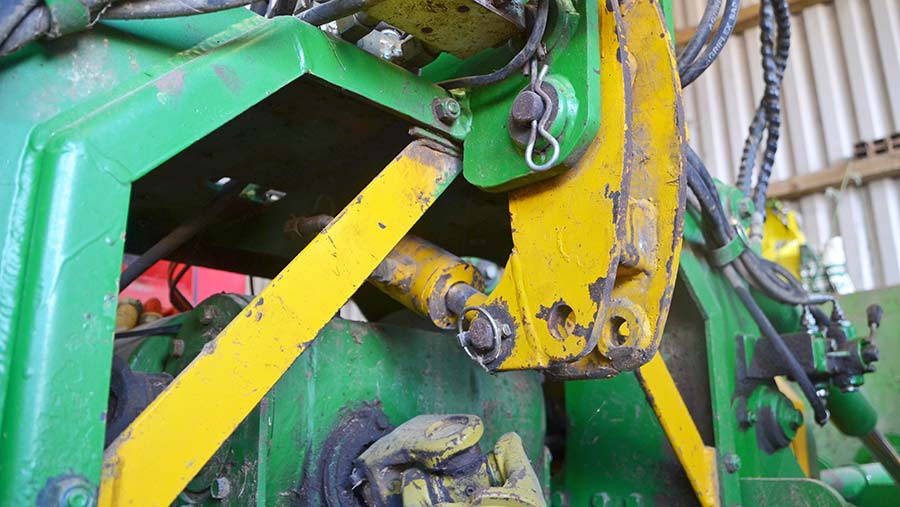 “Our first two sets of metal were square L-shaped tines which easily covered 100ha but the most recent ones are a curved profile, which have only managed 74ha ,” explains Peter Dymond who operates the machine.

Being a relatively new design, the Rotaseeder has received a number of mods since its arrival.

First up, the linkage that carries the rear roller was extended to make room for a set of following harrow tines to help in mixing the seed into the surface.

At this point the number of seeder outlets was doubled to reduce spacing from 62cm to 31cm – a move which saw the evenness of spread become much more uniform.

The Stocks seeder itself was converted from land-wheel metering to a GPS controlled set-up and touchscreen monitor, it too contributing to the overall accuracy of seed distribution.

To improve depth control, two roller sections were added to the outer wings of the machine ahead of the rotor, which has meant it can now be run in slotted holes on the tractor’s linkage drop-arms to rise and fall over lumps and bumps.

There is also a simple but clever device on the top link bracket to improve contour following. Integrated within the headstock there is a double-acting ram with a hose connecting either side of the piston in a self-contained circuit.

This acts as a damper, slowing the reactiveness of up/down movements to produce a smoother finish.

“The Wecan won’t pull out wheelings or humps and hollows but it will even out the surface despite it being a rigid 5m wide unit when it is folded into its working position,” says Peter.

“If conditions require it we’ll stick it on our umbilical tractor on 900mm wide tyres, although 710s are generally fine.

“It’s a 200hp T7050 with stepless AutoCommand gearbox. We need that because of the high power requirement – with set gears you wouldn’t be as productive even with more horsepower.” 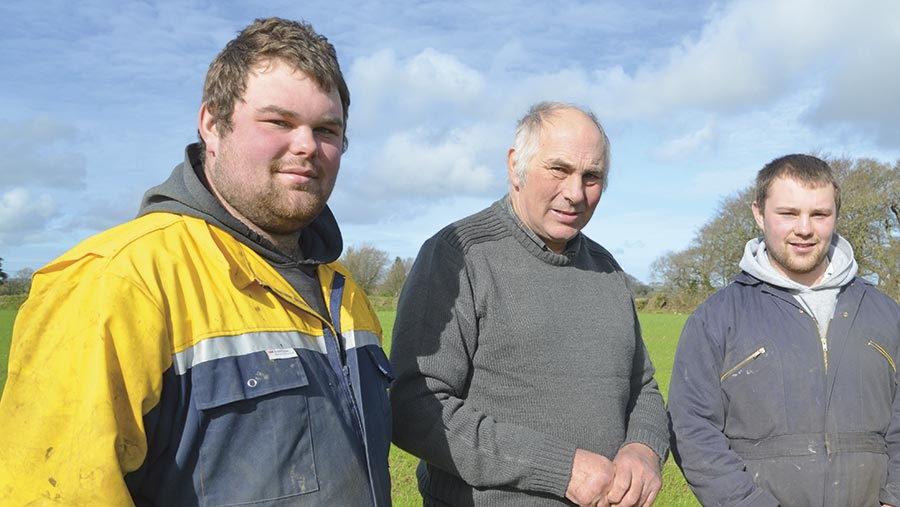 Matt, Rodney and Peter Dymond have seen the time taken for grass establishment slashed by almost three-quarters and costs cut in half © Nick Fone

Output isn’t blistering but when you factor in all the other operations that are no longer required it’s a big efficiency gain, often at a time when there simply aren’t enough working hours in the day.

“Pulling a subsoiler through in front makes it much easier and quicker but it can leave a ridged finish.

“To solve that issue we’re looking at moving from three to five tines on our 3m Flatlift. Even without that, the Wecan makes it a much quicker, cheaper job than before.”