The Scotgrass site at Crichton near Dumfries was busy with the sounds of forage harvesters, tractors and loading shovels making light work of a healthy grass crop. We’ve picked out some of the highlights – including new mergers, mowers and forage wagons. 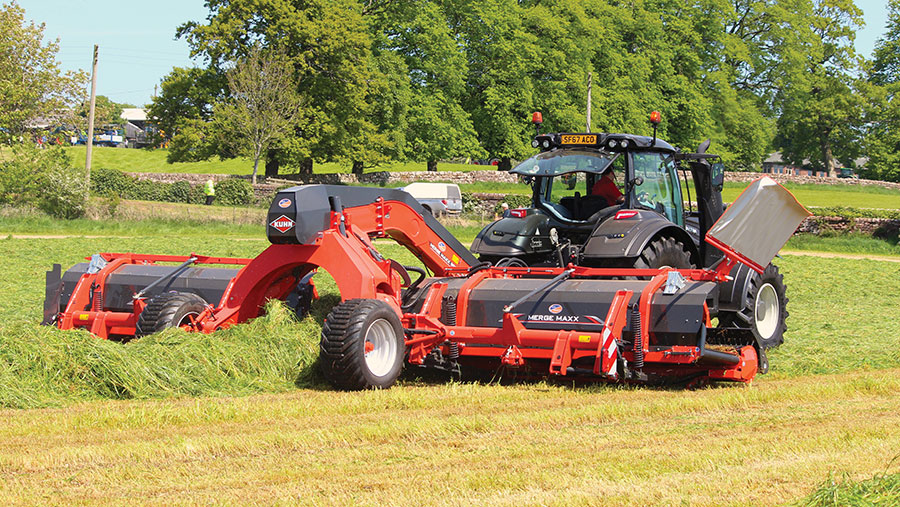 Mergers appear to be offering genuine competition to rake in the business of windrowing grass ahead of balers and foragers.

Kuhn’s version – the Merge Maxx – uses two adjustable, variable width and bi-directional belts to pick up grass across a 9.5m width in one pass.

The belts can be run in either direction, meaning they can be run inwards or outwards to form a single window, or in the same direction to create a swath from 18m or forage using two passes. In light crops, such as a multi-cut silage system, it can be used to collect 27m of grass into one windrow from three passes.

The upshot of this, says Kuhn, is that pick-up and window width can be adjusted to suit the quantity and type of forage material, which may help to reduce the number of passes required.

Rollers at the front and side of the pick-up apparently pass the crop onto the merger belts more smoothly and lump-free than a rake, which means foragers can potentially run up to 3kph quicker.

To help follow ground contours, the pick-up skids articulate and there are also springs and pivot points to provide vertical and angled ground clearance. This should mean less debris contaminating the crop and few damaged blades on the forager or baler. 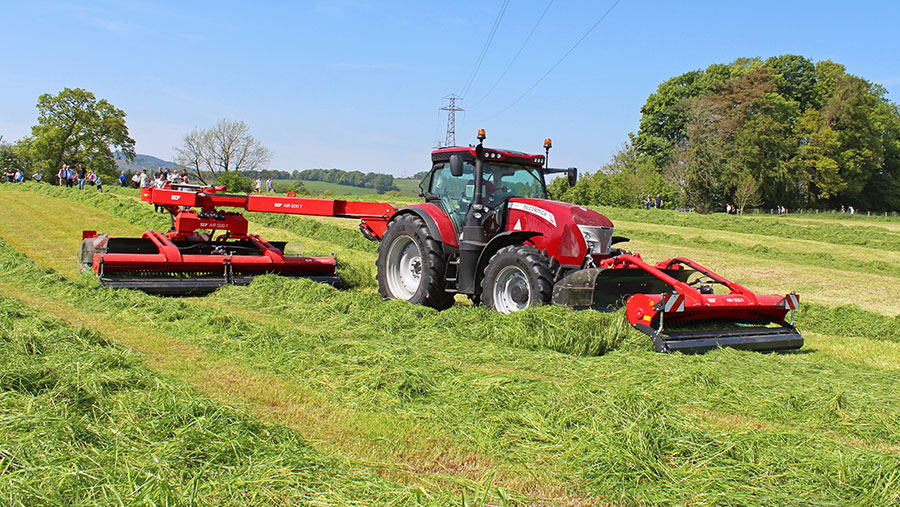 Also offering a merger option was Slovenian firm SIP, which believes it could start replacing rakes, particularly among those fastidious about silage quality.

Rather than dragging tines across the ground – which can sweep contaminants such as stones and crusted slurry into the swath – the merger uses a baler-style pickup to lift the grass off the ground, leaving the undesirables behind.

Once off the ground, the crop is deposited onto a conveyor belt, which gathers it into a row.

The firm introduced its first front-mounted machine last year and has just added a rear, trailed unit to the line-up. These can be used as standalone machines, but deliver the best results when teamed together.

In two bouts, the front-and-rear combination will gather in up to 16m of grass into a single row. This is less than a typical four-rotor rake, but thanks to forward speeds of up to 20kph, it will apparently outperform one.

The combination pictured, which includes the front-mounted Air300F and rear Air500, comes in at about £60,000. 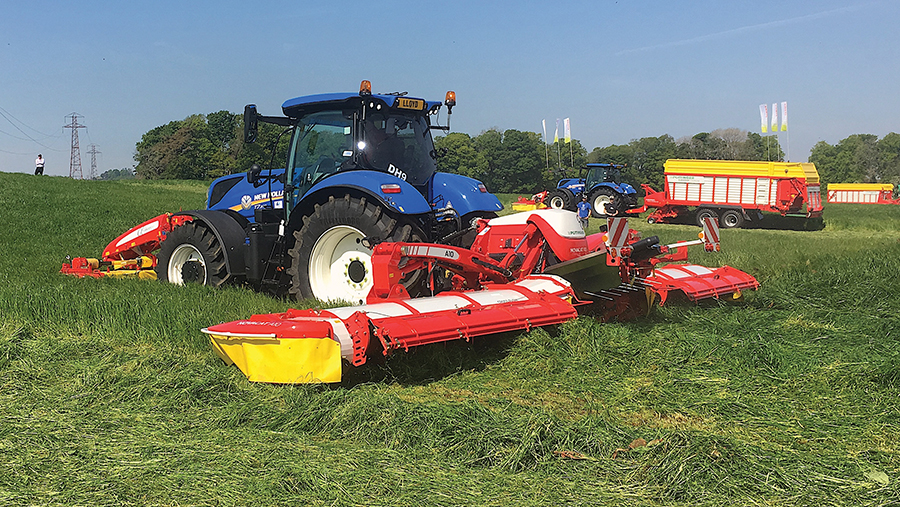 Scything its way through the lush grass on the Pottinger stand was the firm’s latest set of Novacat A10 mowers, which were showcasing the benefits of a new Cross Flow option.

This uses an auger running behind the mowing discs on both wings to ferry all the cut grass into the central run behind the tractor – ideal for high-powered foragers capable of gobbling 10m of grass in one pass.

The Cross Flow augers use two curved guards to either leave the grass spread over the full width when open, or to bring all material into one row for crops when closed. The latter is good for forage rye, where there is a potentially high leaf loss when rowing up.

Fitting the machine to an Isobus-ready tractor allows operators to make use of its steering sensor for width adjustment when cornering, which means overlaps are reduced and near-full widths are taken on bends.

The mechanically driven 10m mowers, along with the smaller 352CF rear-mounted single mower, are the only two models available with Cross Flow. The A10 retails for £58,796. 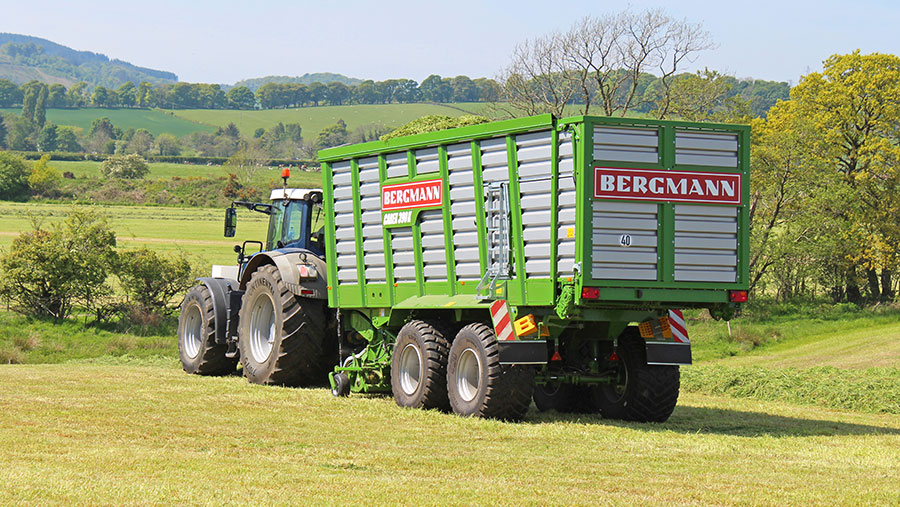 Bergmann forage wagons are a fairly rare sight in the UK, but importer Continental Soil Technology is hoping to change that by bringing in the German maker’s latest collection of high-spec machines.

There are two ranges on offer – the Shuttle and the Carex – but the slightly smaller Carex is the machine the firm is concentrating on. This comes in several different sizes, ranging from 27 to 52cu m, which puts the 39cu m 390 pictured roughly in the middle of the range.

This has a 2,050mm-wide pickup, which is hydraulically driven to allow better matching of pick-up and forward speed, and it can be reversed to clear blockages. Bergmann has also stuck with a cam-track pickup so that it can be run at lower speeds and deliver the grass smoothly into the rotor.

To improve crop flow, the rotor is mounted low in the machine and there’s a sloping floor to help the grass move freely into the box. All Carex machines run a set of 41 knives, which delivers a 35mm chop length. There’s also a movable headboard to help increase capacity.

Unlike the many manufacturers that build their boxes shorter and add bolt-on extensions, Bergmann builds theirs in one piece. The idea is that it makes it stronger, but it does make them more difficult and expensive to ship into the country.

As a result, Continental Soil Technology is selling the machines direct to farmers, rather than through a dealer network. Prices for the Carex line-up range from £50,000 to £100,000, depending on size and spec.

The larger Shuttle models use the same chassis and box construction as the Carex, but they feature larger bodies and have the option of triple axles. They also have a wider a 2,256mm pickup and 54-knives.