Strautmann is to launch a range of self-propelled diet feeders on British shores.

The company’s UK importer, Opico, has been tasked with the job of convincing dairy farmers that running a self-propelled feeder is easier to justify than they might think.

There are several models that run across two ranges, starting with the small two-wheel steer Sherpa units aimed at 150 to 200-cow herds and topping out with the flagship 2002SF model in the Vertimix range. It claims to have the capacity to feed up to 350 cows an hour and comes with four-wheel steer.

Engines have been chosen to match tub capacity, so the smaller machines get 144hp from a Perkins four-pot and the bigger boys get a six-cylinder, 175hp Deere engine. 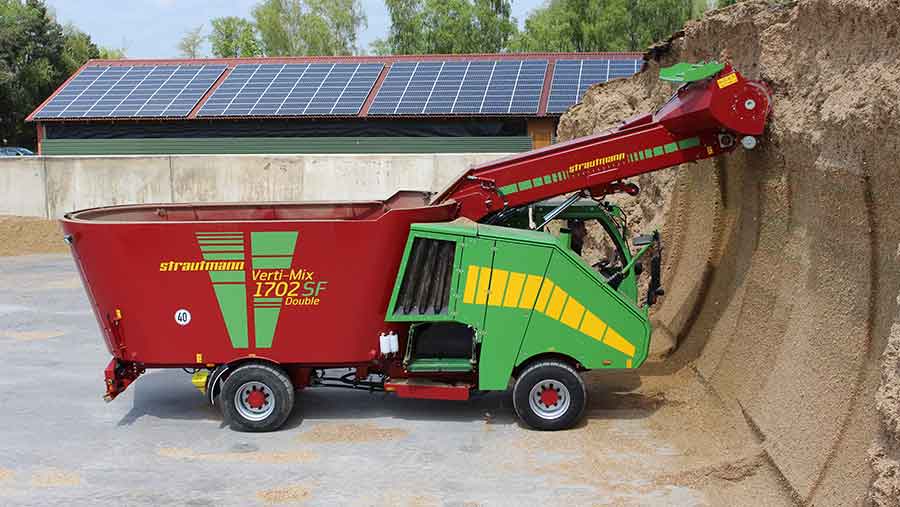 Both self-propelled feeders use the same tub mixing system as their trailed siblings. They carry either one- or two-stepped augers, which sit vertically in the tubs and use replaceable 20mm thick stainless steel strips bolted to the leading edge to protect them from excessive wear.

The discharge system is also similar to the trailed set-up, with mid-mounted or trailed conveyors chucking material to the left or right.

Strautmann says its impressive outputs are down to the centrally mounted front loading arm, which consists of a rubber belt conveyor that operates at two speeds to transfer the material from the 2m-wide spinning milling head into the mixing tub.

Maximum reach is 5.1m and, as standard, the head carries 60 right-angled knives. However, there’s also the option of taking that up to 114, with the extra blades running straight rather than angled.

The small cab is fitted on the front-left corner of the machine. Visibility is fairly limited, but the controls are well-placed and all the main functions for the loader arm and milling head are plastered on a joystick.

Both machines have in-cab displays, though the SF’s touchscreen, iPad-style unit is the fancier. It has three main operating screens for filling, unloading and road work while there are two cameras providing good views into the tub and to the rear of the machine for shunting around the yard.

Both models also come with weighcells and show the tank load on the screen, providing more accurate quantity control of the different foodstuffs for farms feeding total mixed rations.

Opico is offering both models to the UK market on a contract hire basis with monthly repayments varying depending on use, rather than selling them outright.

It means the Lincolnshire importer will ultimately own the machine at the end of the contract – however long it might be – although the user will have the option to buy it once finished.

There will also be a mandatory service package sold with every machine in the UK extending to four years or 4,000 hours, but that won’t cover wearing parts such as tyres and brakes.