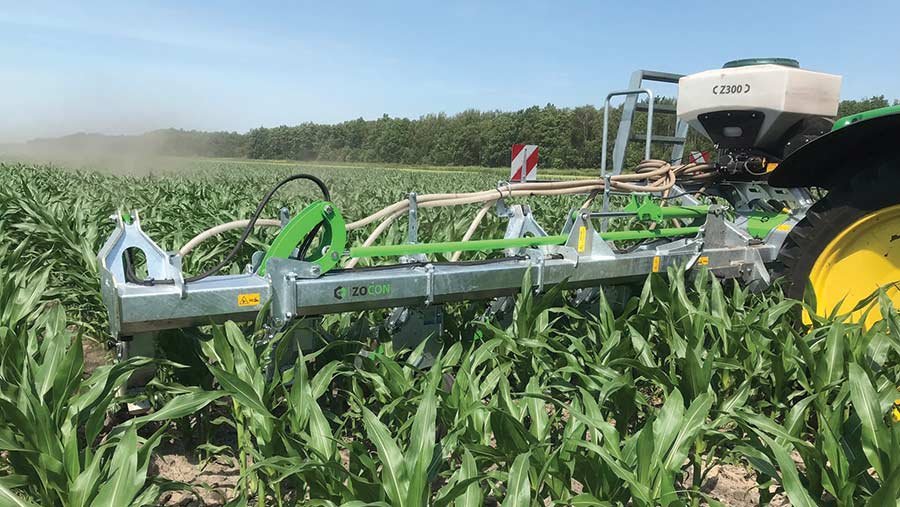 A new Dutch-built catch crop drill could offer farmers a quicker and cheaper way of establishing grass under maize.

Development of Zocon’s Greenseeder involved input from a dozen contractors in the Netherlands, where it is now mandatory to establish a green cover crop by 1 October on maize ground being left bare after harvest.

See also: Undersowing maize: Trials, tips and all you need to know

Water companies in the UK are also taking a closer look at the environmental impact of maize crops, particularly soil erosion and nitrate leaching.

“Several water authorities are offering financial support to reduce the problems caused by maize and some dairy processors are beginning to stipulate green cover on maize fields as part of their farm assurance schemes,” says contractor Paul Roe, who is importing the drill with machinery dealer Kevin Mowbray.

“With maize only in the ground for five or six months, typically followed by fallow land over winter, it is seen as neither environmentally friendly or profitable.

“However, the Zocon Greenseeder can quickly establish a catch crop that is good for the soil and can boost forage stocks.”

Trials have shown that the undersown crop has the potential to produce up to 3t DM/ha, which can be grazed or incorporated as green manure.

Some manufacturers, including Pottinger and Vaderstad, suggest sowing grass at the time of maize drilling. However, farm trials conducted by water authorities across the country generally saw more desirable results where grass sowing was delayed for as long as possible.

The Greenseeder’s design focused on three priorities, says Mr Roe – to be robust, low maintenance and modestly priced, all of which contribute to a low cost per hectare.

The linkage-mounted, galvanised main frame provides 850mm ground clearance. This means grass can be sown relatively late in the season, extending the working window in a typical year from mid-June through to the second week of July. 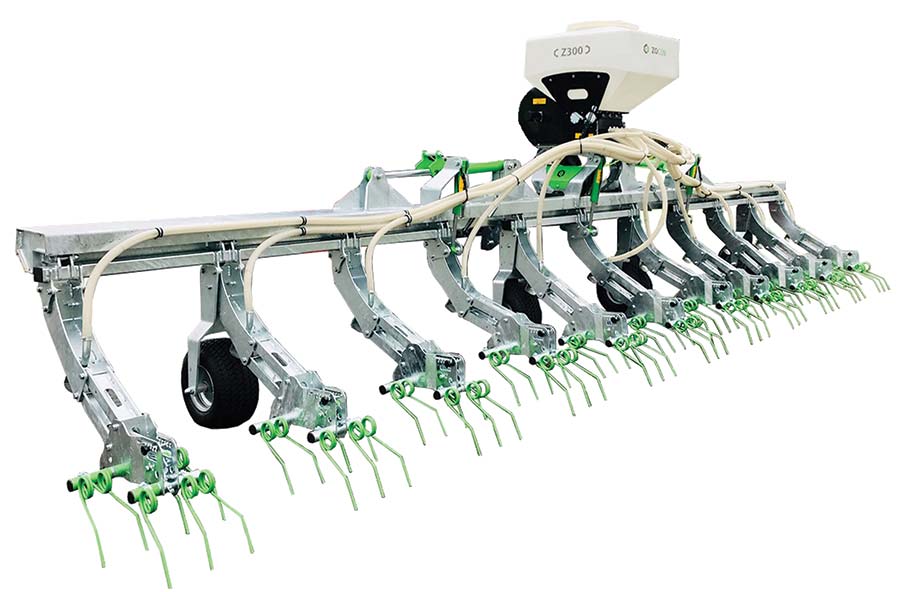 At the headland, one push of the spool valve lifts all of the harrow tines into the air, avoiding any damage to the crop while turning. However, Zocon is apparently looking at the option of section control for those willing to spend more money in return for extra precision.

“This high lift system allows grass seed to be sown in tall crops later in the season without the risk of interfering with the maize,” Mr Roe says.

“The drill is also built to work at speeds of up to 12kph. Timing is critical with undersowing, so if rain is on the way then speed is of the essence.”

Four support wheels help maintain a consistent working height and the seed is distributed through pipes and on to spreader plates.

“We get a full spread of seed – usually a fast-growing Westerwold – right up to the maize plants,” Mr Roe says.

Zocon pairs the system with its pneumatic seeders, which it offers with 150-, 300- and 450-litre capacities.

These come with a quick-change base plate so they can be quickly shifted between cultivators and harrows. However, it’s possible to rig up a Stocks or APV seeder if there is one already available on the farm.

Currently, these are available on only 75cm row widths. However, Zocon plans to modify the robot welding jigs it uses to allow a 50cm-spaced model next year.

Paul Roe Agricultural Contracting has operated across Yorkshire and North Lincolnshire for more than 28 years. Along with baling and muckspreading work, Mr Roe sows about 1,000ha of maize each year and, after toying with adapting a sugar beet hoe to undersow grass, decided to buy a Zocon Greenseeder.

He later agreed to take on the import job with Kevin Mowbray, who has more than 30 years’ experience in the farm machinery trade with the likes of Simba, Alo and Grimme. The pair also deal in second-hand maize drills.