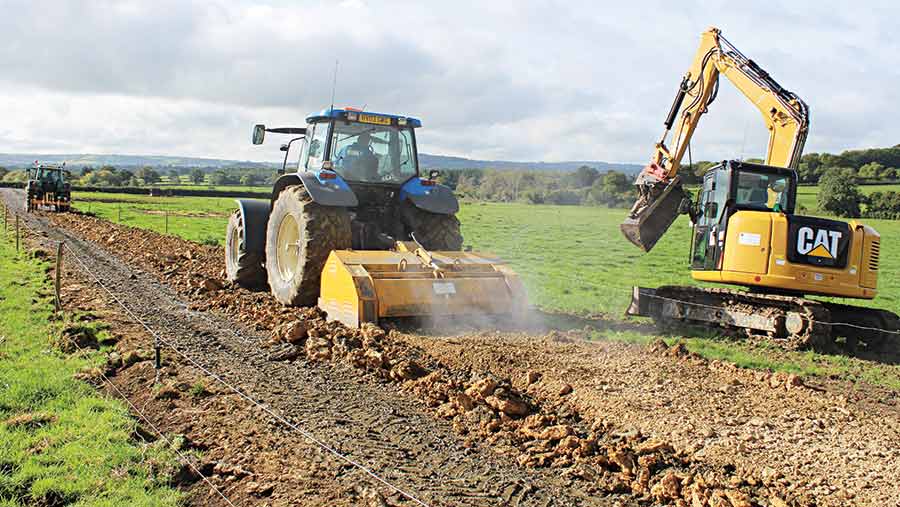 Bashing and crashing along worn-out farm tracks is a pretty tedious pastime. But it is one many farmers will endure for years, fearing that the cost of putting it right will be extortionate.

However, as long as your roadway has a decent quantity of stone in its construction, it won’t necessarily be that expensive to put right.

Across the length and breadth of the country there are now several contractors offering to reclaim your existing tracks, rather than correcting them by bringing in vast quantities of new stone.

This basically involves ripping up and crushing the motley collection of stones and aggregate you already have, before consolidating them into a decent surface.

See also: A guide to buying and installing cow tracks

Somerset-based firm Dave Creed & Sons is one of the longest-standing contractors in the road-reclamation game, having been operating for more than 15 years.

We paid Gareth Creed – company director and business owner – a visit to see what’s involved and how much it costs to get the average farm roadway serviceable again.

Can any track be restored?

Before getting into the process itself we wanted to find out if even the most roughshod of roadways could be brought back to life.

According to Mr Creed almost anything can be restored, but the simplest are those that are made entirely of stone to a depth of at least 10in (25cm). It is also important to have a decent width so that vehicles can vary their wheel marks.

Tracks that are mainly stone with a few thin sections can also be sorted out fairly easily by digging out any soil and pulling in material from thicker sections of track or adding new material.

Even heavily damaged tarmac roads can be crushed and resurfaced.

Those with minimal stone content can be stabilised with hydrated lime and cement to make an earth roadway, which will last reasonably well in some conditions. Otherwise, you will need to start from scratch to create anything decent.

Sadly potholes are a tough one to fix. Because the edges and base of the hole are so compacted, water will always pool in them. That means any material that is added in will eventually be washed or pushed out.

Ripping up the edges of the pothole can help, but more often that not this just makes the pothole bigger.

The theory of ripping up and crushing the whole surface is that this completely removes potholes and creates an even surface so that they shouldn’t reform.

How the process works 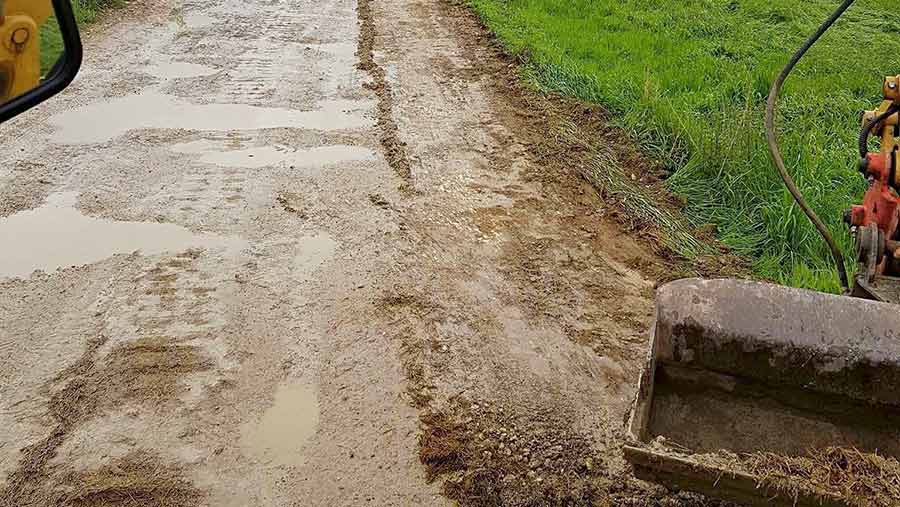 Soil is bad news in a farm track because it causes grass and weeds to take hold, which degrade the track’s surface with their root structures.

In turn these retain even more soil and moisture, which makes the track even weaker. Grass verges are also trouble because they prevent water draining and gradually encroach onto the road.

Therefore, all soil and vegetation, including the verges, should be scraped off before the resurfacing process starts. Mr Creed does this with his 10t Cat 308 excavator and hydraulic tilt bucket.

But if you have got your own machine or a decent loader and bucket you could save a few quid by doing this bit yourself.

Often decent stone will have been pushed into the verge, so this can be dragged back onto the track to save buying more material later.

Pooling water also causes problems, so unless the existing roadway sits proud of the ground around it drainage channels will need to be dug down the sides.

These can be simple earth ditches, but for a longer-lasting job it is better to install a French drain using gravel and land-drainage pipe.

The final road surface will be cambered so that any water on the surface will quickly drain into those channels. 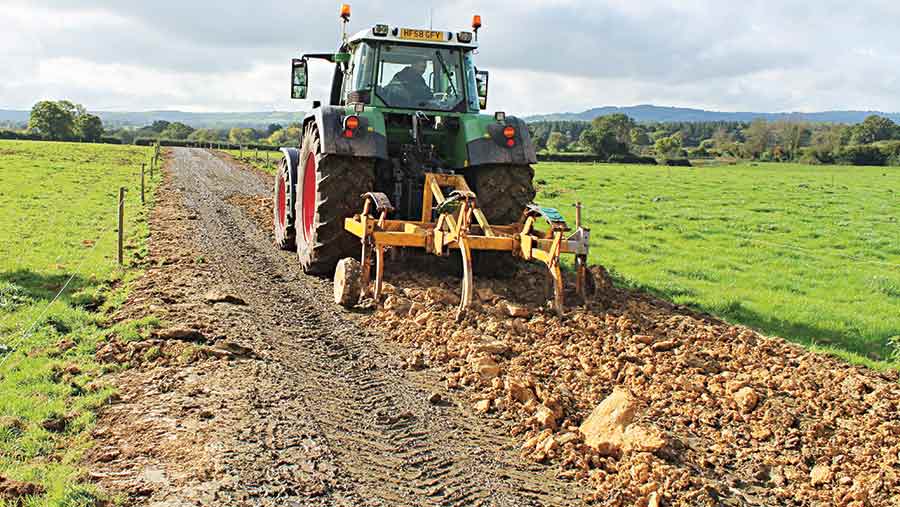 Next, a five-leg heavy-duty Kirpy ripper is used to open up the track’s surface and pull up some of the useful stone from lower down.

Over the years this process has dragged up some interesting objects, such as metal lamp posts, lengths of railway track and a false leg. However, most of the time it is just usable stone, concrete or tarmac that surfaces.

The other aim of the ripper is to loosen the hard edge around potholes to prevent water pooling and causing them to form again.

To help get the tool into the ground, Mr Creed uses the down pressure from the  double-acting rear linkage on his Fendt 820. He has also modified his New Holland TM190 to do the same job.

The task is hard on the kit, with a new set of points required every 10 miles. The heavy-duty auto-reset springs have also been known to snap under the pressure. 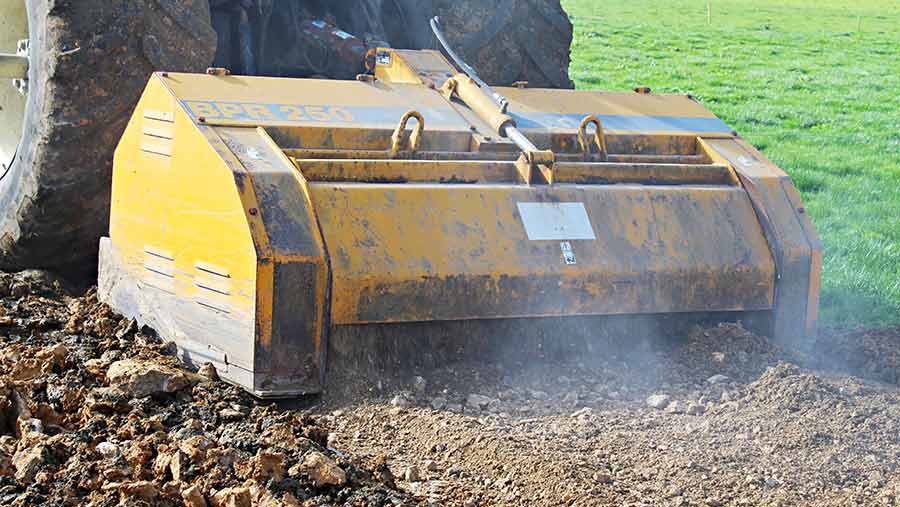 Next comes the 2.5m Kirpy crusher, which is arguably the most important part of the process. This is fitted with 32 tungsten-carbide hammers that pulverise the stone into fine material.

These are mounted on a rotor that spins in the opposite direction to the tractor and smash the stone against an in-built anvil.

Any size of stone or concrete can be reduced to usable road material, as long as it will fit under the front hood.

As well as breaking up the stone, the crusher will naturally push larger material to the base of the track, letting the finer material settle on top. Usually, this will perform several passes being graded in between.

If more fine material is needed the ripper can be run through again to lift more large stone to the top for crushing. 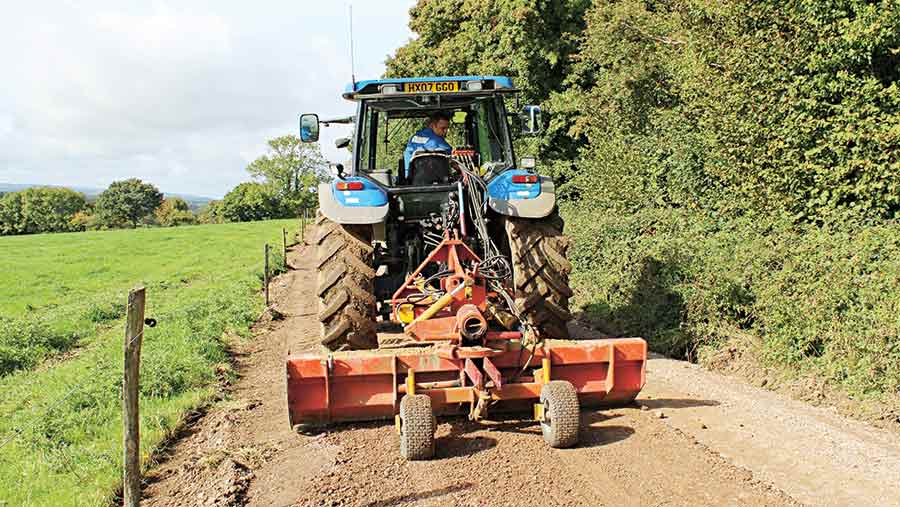 With the material crushed, it can now be graded out to give an even surface. If there is not too much variation this can be done with a tractor-mounted grader. However, if large quantities need to be moved, the Cat 360 will step in.

At this time the grader will also be used to add a camber to the track to prevent water pooling and forming more potholes or ruts. More passes can be made with the crusher to give a finer finish and water can be added from a bowser to lay the dust and help consolidate the surface.

For a longer-lasting finish, cement can be incorporated. This is spread on the surface with a Stehr cement hopper before being mixed in using the crusher.

Water is also added from a bowser, creating a finish that is similar to a concrete road. The cement is generally added at a rate of 1t for every 10m and is worked into the full depth of the track, which is usually 10-12in (25-30cm). 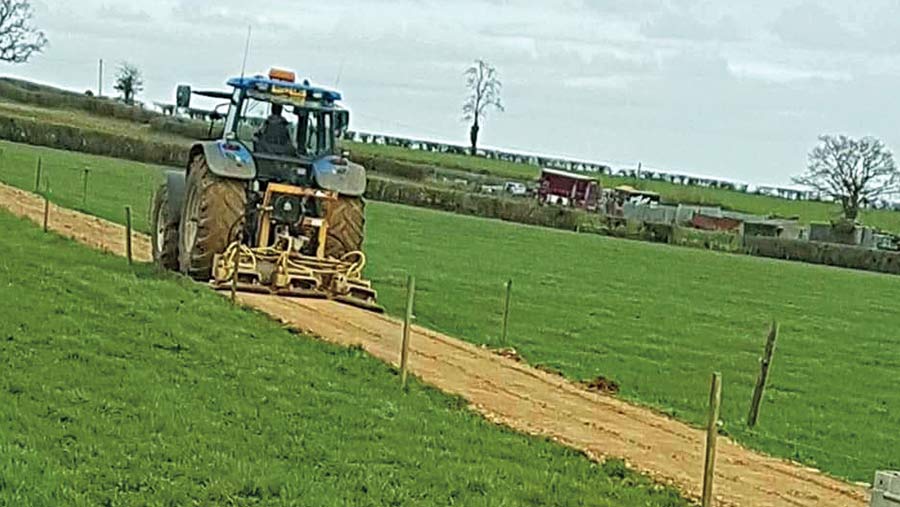 The final process is to compact the surface with a tractor-mounted wacker plate, which will perform several passes.

In some situations a vibrating roller will also be used to give an even tighter finish.

For a 3m wide, 500m track the whole process will take between two and three days, with an extra two if cement is added. 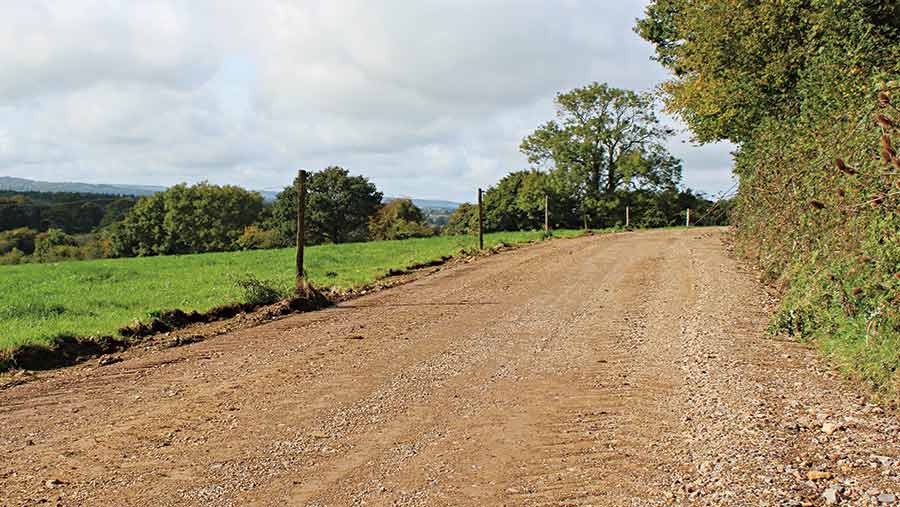 It takes a couple of months for the track to fully settle and bed in, so during that time it needs to be driven on at sensible speeds, particularly on corners.

Aggressive acceleration, braking and general rally driver behaviour will do it no good whatsoever.

Running in the same spot over and over again will also wear in channels that water can pool in. If this happens you can eventually end up with ruts and potholes forming.

Therefore, it is important to vary wheelings to make sure the surface is compacted evenly.

Simple resurface with no added material: from £5 to £12 per linear metre

Significant resurfacing having to redistribute or add more stone: up to £18 per linear metre

Cement stabilisation: from £8 per sq m

Note: where applicable prices include the cost of materials. 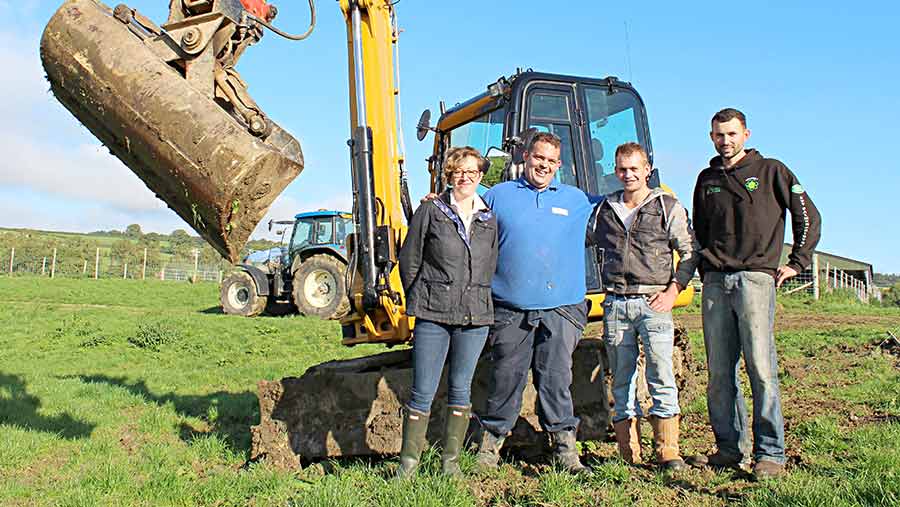