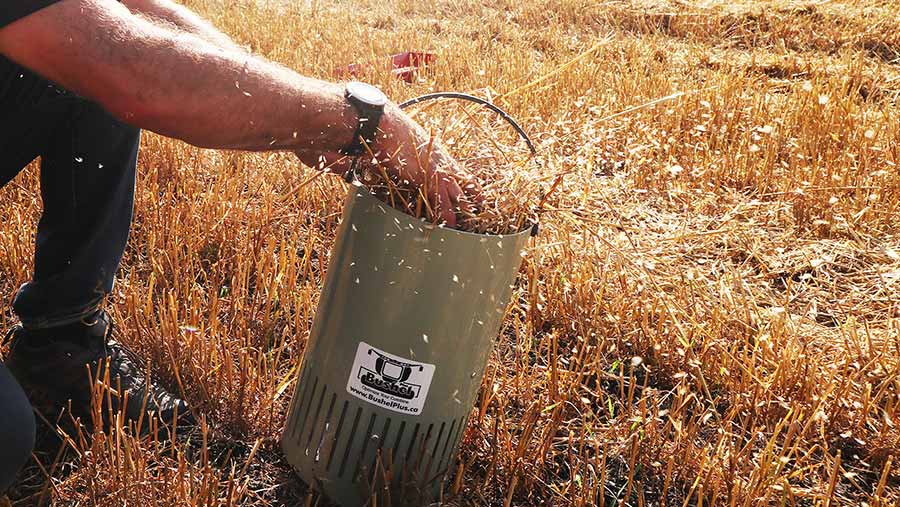 A novel Canadian combine attachment is helping growers calculate the monetary value of thrown-away grains by checking tailings as they fall from the machine.

The Bushel Plus system was developed by Marcel Kringe, who decided that scratching around in the swath after the first run to check ears have threshed wasn’t the most comprehensive test when dealing with millions of pounds’ worth of commodities.

Similarly, running behind the combine and throwing a hessian blanket down to catch the material – albeit an old-school method – was far from accurate and laced with danger. 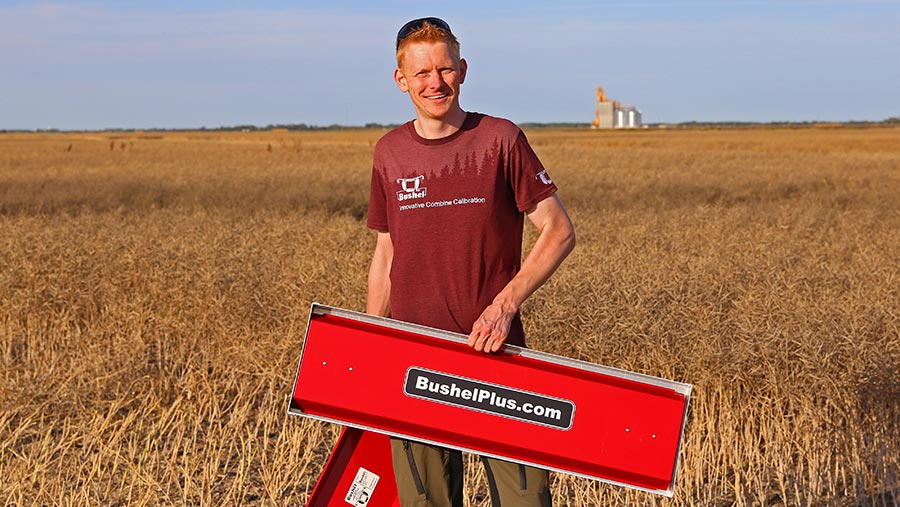 Mr Kringe is an agronomist and has worked on farms all over the world, all the while believing growers are rarely certain exactly how much the losses from the combine were costing them in cold, hard cash.

What’s more, when losses appear to rise on the cab monitor, most operators ease back. This reduces output and pulls the combine further away from its maximum capacity sweet spot.

Mr Kringe was keen to find out why these expensive machines don’t often run continuously at full capacity. As loss monitors fluctuate, the operator tends to keep the readings at an acceptable level, which means the combine runs at sub-100% output.

If losses shoot up, easing back further tends to cure the problem in the short-term, while persistently high read-outs can always be solved by tweaking the threshing system or reducing the sensitivity of the sensors (provided weather and crop conditions are suitable for harvesting).

But by being able to quickly test the losses from the sieves, header or in the straw when they appear to be rising, operators will be better placed to decide whether maintaining the current speed, or even increasing it, will have any material impact on the amount of grain reaching the hopper.

This could be particularly handy in making decisions when changing crop type or farm, and whether to continue cutting when the dew lands in early evening.

The system’s simple design looks like it could have been knocked up in any farm workshop. It consists of a long aluminium tray which is covered by a secondary layer containing fixing magnets.

The covering tray is apparently essential for consistent results, as letting seeds creep in before the unit is dropped to the ground would skew the results.

It connects to the harvester via two high-strength magnets, usually under the straw elevator or on the combine’s rear axle. A small remote control activates the drop function, which releases the internal box onto the floor. The remote works from a pickup or tractor alongside, or from the combine’s cab.

The battery-powered device will last for about 120 drops or two days before needing a recharge and requires no electric source, so it can be quickly switched to other combines.

Once the tray is on the deck, the combine passes over and a sample of the swath is laid on to it. By attaching it to the same position on the combine each time, drops are repeatable so that accuracy can be maintained.

There are two tray sizes – one suitable for sitting in tall stubble, such as oilseed rape, and a wider unit that will lay level on wheat and barley stubbles.

The trays can also be placed in a standing crop to measure header losses as the combine passes over – useful when harvesting beans or oilseed rape that have a habit of shelling on impact. 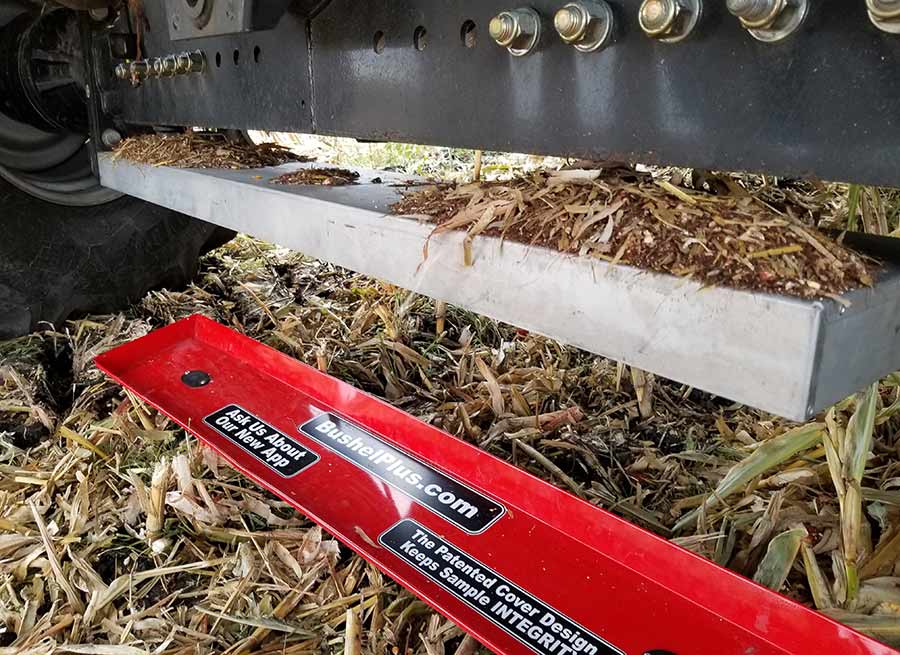 The pan is covered so the reading is accurate when the combine passes over it. © Marcel Kringe

The blower has a variable speed, so for heavier crops, such as beans, it can be dialled up, and a lighter puff can be used for small grains. All told, the process takes less than 30secs.

The seed is then weighed and the figure tapped into the Bushel Plus app. Other information can then be added, including the cutting width and size of combine, field size, yield and Hagberg data. The system then calculates a cash figure based on the kilograms of losses/ha.

If these are negligible and the combine has spare capacity, Mr Kringe has seen customers increase speed by up to 2kph without seeing any adverse effects on losses.

In some cases, he says, growers have upped forward speed by 15-20% and harvest has been completed earlier, which has helped beat the weather and maintain quality levels.

The purchase price of the Bushel Plus kit is £1,800 and includes the two trays, scales and a separating tower. The app is available free on iOS and Android.

David Passmore, who ran the Bushel Plus system on his New Holland straw walker combine last harvest, has taken on the UK import and distribution of the Canadian system with Mark Hathaway, through the pair’s Castlehaven business.

Another Canadian company, Schergain, has also developed a system for monitoring losses on the combine. It can be mounted on any model of harvester, and uses a simple measurement table to work out the extent of the losses.

It attaches via two magnets, but – unlike the Bushel plus system – it isn’t designed to be left on the combine as there is no protective cover stopping unwanted debris and grains working their way into the tray.

Strong winds and leaks on the combine may also provide false readings.

To use it he combine driver has to stop the machine to attach the tray in a suitable position. Like the Bushel Plus kit, it is best fitted on the back axle as, once dropped, it can catch all the material from the sieves and swath.

Before dropping the pan in a new field, the operator should drive up to 45m to get crops flowing through the machine and acceptable loss settings on the monitor.

The sample is then cleaned to reveal any caught grains and the amount remaining measured in the grain gauge. This figure is tallied against the Schergain grain loss measurement chart to find out how many kg/ha are being lost.

The system is available through European distributor Oria Agriculture, based in Lyon, France, and costs £1,895.