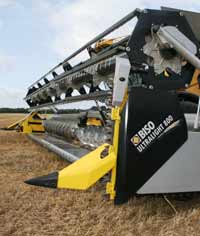 Austrian header company Biso demonstrated its latest 12m (40ft) header in Warwickshire last week. Made mostly of aluminium, the Ultralight 800 weighs in at just under 4t, a full 2t lighter than its predecessor, the Crop Ranger VX1200.

Both the modular frame and arms are made of the lightweight metal, and each section is bolted together in sections for strength. Because the company has kept the weight down, there’s no need for the wheels which appeared on the earlier model.

The split cutterbar is driven mechanically from either side to minimise vibration, and the stainless steel bed extends by 800mm for better feed, an extra 200mm over the VX1200.

Also made of stainless steel and mechanically driven, the 610mm auger is split in two, whereas the hydraulically-driven reel is constructed from sections of aluminium and plastic, meaning each can be replaced separately if needed.

With up to 100mm header tilt, the Ultralight is fitted with an integral rape knife, which is operated hydraulically from the cab and can be used alongside the divider.

Instead of metal, toughened plastic plates underneath the knife section reduce overall weight and plastic guards prevent crop getting wrapped around the reel. To reduce the hydraulic burden on the combine, the header is fitted with its own separate 10.5-litre pump unit.

This year, the Ultralight is only available to fit to New Holland combines, but next year Biso will be able to tailor the connection to other large combines, it says.

Having undergone extensive testing in Slovakia, the Czech Republic and Germany, this was the first model to be tested under UK conditions by British importer Abrey Agricultural.

The Ultralight 800 will be available for the 2010 harvest and prices are due in the next couple of weeks. There is rumoured to be a 13.5m (44ft) prototype in the offing for testing next year.