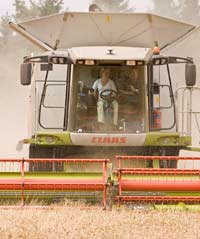 Claas‘s new hybrid Tucano (not to mention the firm’s new 12m header) may have been grabbing the headlines in recent weeks, but it’s still the Lexions that you mostly see out and about.

Emily Padfield took the opportunity to do an in-cab interview with one user in Essex. Andrew Tetlow of contract farming company AWT Farm Services runs a Lexion 600 with a 10.5m header as well as a 570 with the 35ft header.

AWT, based near Stansted, harvests 4300 acres across Essex, Suffolk and Cambridgeshire. All corn goes to Camgrain, which supplies Sainsbury’s with its milling wheat (hence the snazzy livery).

Andrew says the Lexion 600 regularly achieves 100t/hour spot rates, which takes a bit of coping with. However, with three tractors and trailers taking the corn back to a concrete pad before it is loaded into Camgrain lorries, he reckons they can cope with 1000t/day.