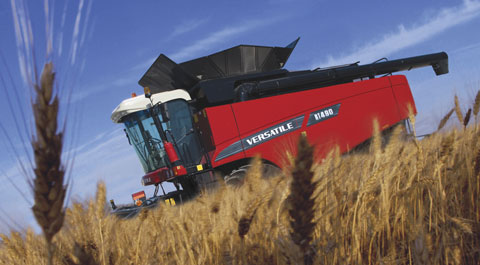 Combines used to be made in Britain. But the days of Lely Fisher-Humphries production in Wiltshire and of Massey Ferguson combines emerging from a factory in Kilmarnock, East Ayrshire are long since gone.

Today, most of the machines that work their way through Britain’s harvest of grain, oilseeds and pulses are built in Belgium, Germany, Italy and the United States, with a handful making the journey from Croatia, Finland and Poland.

As the dominance of the global farm machinery brands Case IH, Claas, John Deere, New Holland and Massey Ferguson has increased, so combine manufacture has been consolidated into fewer locations.

Some national brands still survive, notably in South America, Russia, Belarus, India and China. But on the whole, the global market of around 37,000 combines a year is largely mopped up by the global players.

Deere reckons to account for over 45% of combine sales worldwide, having sold more than 1.1 million units in the past 80 years, while Claas is the leader in Western Europe with around 40% market share achieved by combines produced at its Harsewinkel headquarters in Germany, ahead of New Holland, which claims about a third.


Most John Deere full rotary S Series combines come from the East Moline plant in Illinois but the smallest capacity models – the S660 and S670 – are now built alongside the W- and T-Series straw walker machines in Zweibrücken, Germany. 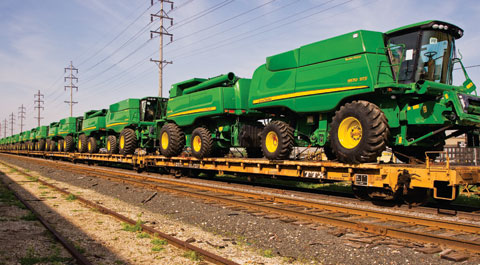 Case IH is a strong second to Deere in North America, where annual industry sales in the US and Canada are typically between 12,000 and 13,000 units. But Claas is muscling in on that market, too, vying for third spot with AGCO and New Holland as Lexion combines assembled in Ohio continue to gain ground.

Fewer big combines are making the trip across the Atlantic to Britain: Case IH Axial-Flow machines all come from CNH Global’s Grand Island factory in Nebraska but New Holland has built the CR flagship range in Zedelgem, Belgium for the past six years.

In fact, the range-topping CR9090 built there makes the reverse journey, being shipped to customers in the States (and Australia); the plant is also the worldwide source of New Holland CX straw walker combines. 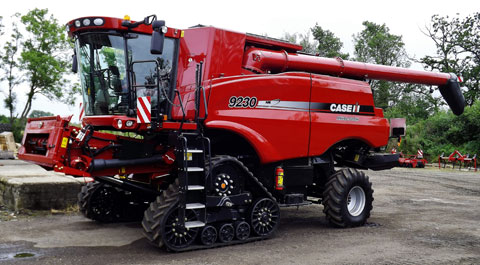 AGCO ships its Massey Ferguson full rotary Fortia combine into some European markets, along with Challenger (Eastern Europe) and Fendt (Western and Eastern Europe) versions. But all UK-market machines have been produced at the Laverda works in Breganze, Italy since 2010 when the former Dronningborg factory in Denmark was closed.

Considerable investment is being poured into new production facilities at Breganze now that it is a wholly-owned operation as AGCO aims to double its West European market share from the current 10% or so.

With Deutz-Fahr combines coming in from the Croatian harvester plant acquired by the SDF Group in 2005, the only combines imported from outside Western Europe are New Holland TC straw walker machines, which are built in the former Bizon combine factory in Poland. 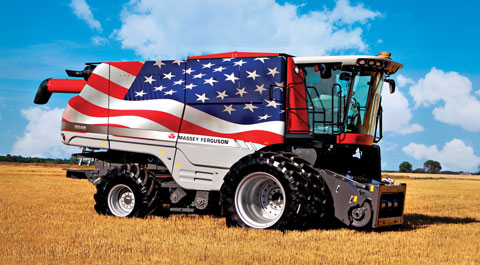 Combine production in central and Eastern Europe has diminished since the opening of markets to Western manufacturers; Claas, John Deere and New Holland have their own or joint-venture final assembly operations there, and AGCO will soon join them.

This has left companies such as Gomselmash in Belarus and Rostselmash in Russia struggling to defend their home markets and being increasingly reliant on traditional export destinations in neighbouring states, Africa, Latin America and China.

The Russian concern is looking to Western markets, though; it launched the Torum combine with its novel rotating concave threshing system into the North American market this year through the Versatile operation it owns in Canada. 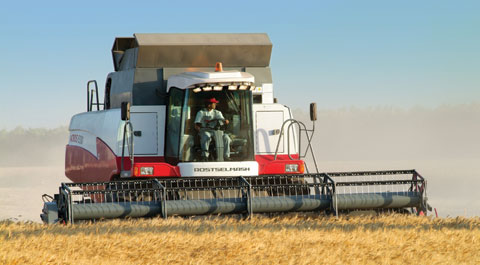 South America is a growing market for the global players, especially in Brazil where AGCO (with Massey Ferguson and Valtra combines), Case IH, Deere and New Holland all have factories, while China is considered ‘the next big thing’ as manufacturers forge alliances with local combine makers.

They also anticipate growing potential in India, where Claas now claims close to a third market share with the Crop Tiger self-propelled combines it builds there. The market is relatively small at present for such a vast country at around 3000 units in a good year.

But with local manufacturers such as Preet Agro Industries (which claims more than 30% of the market) all based in Punjab and making similar combines to a standard design there is clearly scope for innovation when the economics come right. 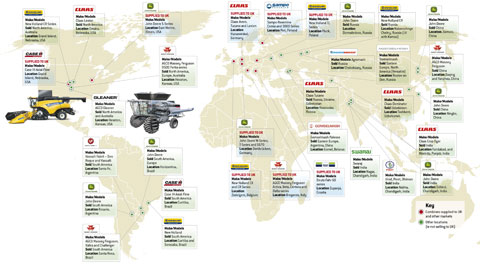 More on this topic: combine reviews and tests