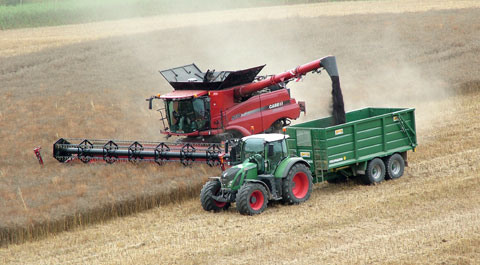 Established in 2002, J V Farming is a collaboration between four Dorset farmers sharing men, machines and grain storage in an effort to spread costs, ease logistics and ultimately ensure profitability.

The total acreage extends to some 1740ha (4300acres), two thirds of which is down to combinable crops, the remainder growing forage maize and rye for a digester. Having previously run two combines, seven years ago the decision was made to simplify harvest by moving to one large machine.

“We decided a tracked Lexion 600 was the best option for us at the time,” explains operations director Tim Merry.

“It matched our requirements well on paper but was pushed to its limits by difficult weather and, after five successively tough harvests, was beginning to show its age.”

JV policy is to replace combines every five years and so last harvest four of the biggest machines on offer (a JD S690i, a NH CR9080, a Case Axial Flow 9230 and a Claas Lexion 780TT) arrived at the Dorset operation to prove themselves in the field.

“We’re fortunate that we have good dealers on our doorstep for most of the big brands so that made our choices easier.

“We knew from our experiences the effect that tracks can have on output so we specified that each demo machine came on them but that threw up an issue with the Deere. With our banks we at least need sieve-levelling but we were told HillMaster body-levelling was our only option and only on wheeled machines.”

“All four combines performed pretty well so ultimately the decision was going to come down to money. When we closely analysed what our cost per acre would be over the next five years, the Case was significantly the lowest. I was already sold on the mechanical simplicity of the Axial Flow single rotor design so the choice was fairly straightforward.”

“Having a fixed price contract hire agreement for the next five years was a must and it seemed the Case deal was the most comprehensive, including far more wearing parts than any others as well as the full precision farming package.”

“But reliability was a big factor. Compared to other combines, it has far fewer belts and chains so that should result in fewer harvest headaches.”

The 9230 quickly proved itself this harvest in the oilseed rape, romping along at 5-6ha/hour (12-15acres/hour), churning out 20t/hour. Once into 9t/ha crops of wheat that rose to 35-40t/hour, dropping back to 25-30t/hour in green-strawed spring barley.

Across the season fuel use averaged 17.66-litres/ha with AdBlue working out to about 30-litres/hour.

Borrowed from Case’s Quadtrac tractors, the tracks have thrown up an unexpected advantage.

“The bonus of the Axial Flow’s triangle tracks is that straw doesn’t tend to build up in the running gear however without suspension they do give a rough ride on the road.”

Driver comfort in the cab is a different matter. Being big and airy makes it a pleasant place to spend a 10-hour day but it’s the computer controller that comes in for particular praise.

“The touch-screen is really user-friendly and simple to master – having been driving combines for some 20 years our driver took to it like a duck to water” says Mr Merry.

“It makes my life easier too. At the end of each day I take the memory stick out, plug it into my computer and that day’s crop data loads straight into our Gatekeeper farm software.”

Another big time saving has come about when switching between crops with the new header. Without any plates to add or remove when changing from rape to cereals, downtime is slashed and being able to carry the side-knives on the machine also makes a big difference. But having to swap concaves means it’s still a 40min job.

When on demo, one small feature really impressed on the Axial Flow. “Like the others the discharge rate is really impressive but we found having such a huge volume of grain being dumped so quickly really put pressure on the trailer drivers.

“The Case directs the crop really accurately and because it has a clever electrically swivelling spout, the combine driver can tweak the flow of corn left to right to make sure nothing spills over the sides. I have just one suggestion – unfortunately it doesn’t remember where it’s been set so each time it has to be repositioned – a position memory would be good.”

“The Axial Flow is no better or worse than any other single or twin rotor machine. Set right, we can get decent swaths and we’re modifying ours for next year so that it will drop a much wider row, allowing it to dry quicker and bale more easily.

“It’s not the colour of the combine that dictates straw quality. It’s crop ripeness, moisture, rotor speed and time of the day.” 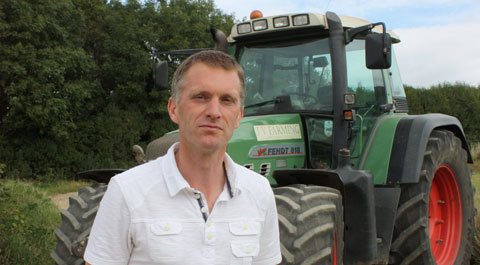