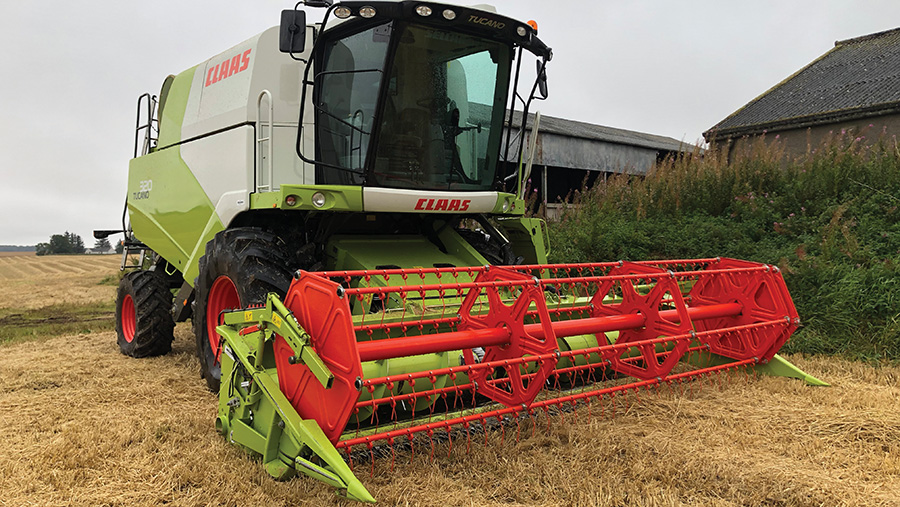 We get the details on Angus arable farmer Peter Booth’s Claas Tucano 320 that replaced a near-identical model in 2017.

What made you choose a Claas Tucano 320?

We have been running Claas combines for the past thirty years or so, first a Dominator 86 and 88 and then a 2008 Tucano 320, which is almost identical to the current machine.

The local dealer, Sellars, is just down the road, so it makes collecting spare parts or getting someone out to sort a breakdown a bit quicker. Most growers around here run their own combine rather than relying on contractors, as the weather is pretty catchy. 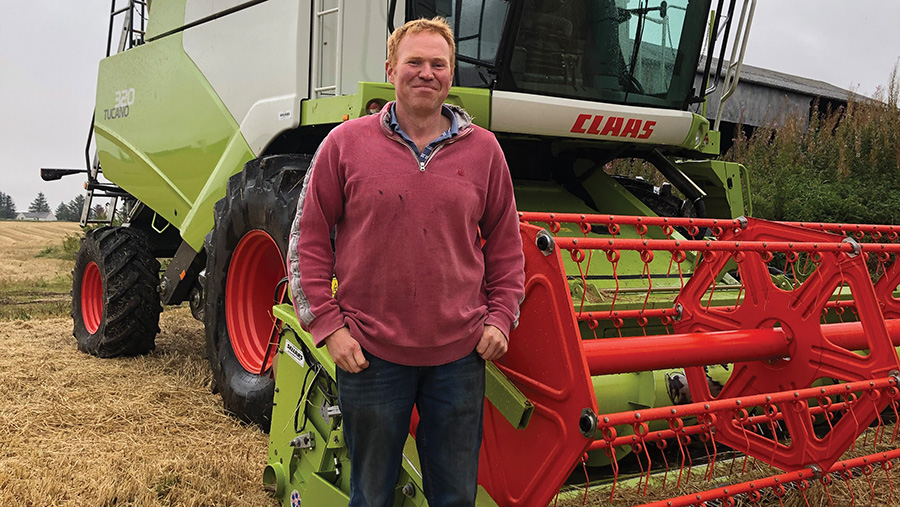 I wasn’t in the market to change my old Tucano, as I usually run them for 10 years, given our fairly modest workload. I’d actually asked the salesman at Sellars to price me up a cultivator for autumn work, but he convinced me to get a quote to replace the combine at the same time.

When it came back, it was about £75,000 to change, which was only £8,000 more than when we traded the J-reg Dominator in for the original Tucano. I think this is partly down to the old machine having clocked modest hours and being well looked after, so the potential for resale at that point in time was good – any later and I might not have been so lucky.

I priced up the equivalent New Holland and John Deere combines but, as I didn’t get a chance to demo them in the summer, I decided to stick with a Tucano. The first one was little trouble and I knew it was the right capacity for my acreage.

It has done about 400 hours so far over three seasons and the only issue was when I spotted grain from the pans landing on the front axle during the first harvest. Sellars was quick to sort it by installing a rubber seal to stop the leak.

Our header has auto-contour, which I wasn’t sure would make much difference on a 16ft table, but I wouldn’t be without it now. We were previously missing low heads in some crops due to undulations, so it has made it much easier to get under laid crops and negotiate rutted tramlines. It is also a light machine, so avoids making too much of a mess on soft ground.

I opted for Claas’ Quantimeter yield monitor this time around, which I have found to be pretty accurate. I can confidently forward-sell a vast majority of the crop based on the information it provides.

I calibrate it when heading into a new variety and last year we harvested about 600t of wheat on one of the farms and the Quantimeter was within 2t after I had loaded the lorries.

This machine has electric sieves, so I don’t have to get out and manually alter them.

My dad always said that manual sieves gave you the chance to have a scratch around in the swath, but being able to tweak on the go helps during the early evening and can allow me to keep cutting for an extra hour.

I also went for the 7,333mm XL unloading auger, which we had on our old model, instead of the shorter 5,945mm version.

Most crops get baled and the longer spout avoids trailers running on the swath – if the straw then gets rained on, it is quicker to dry because it remains fairly loose and airy. 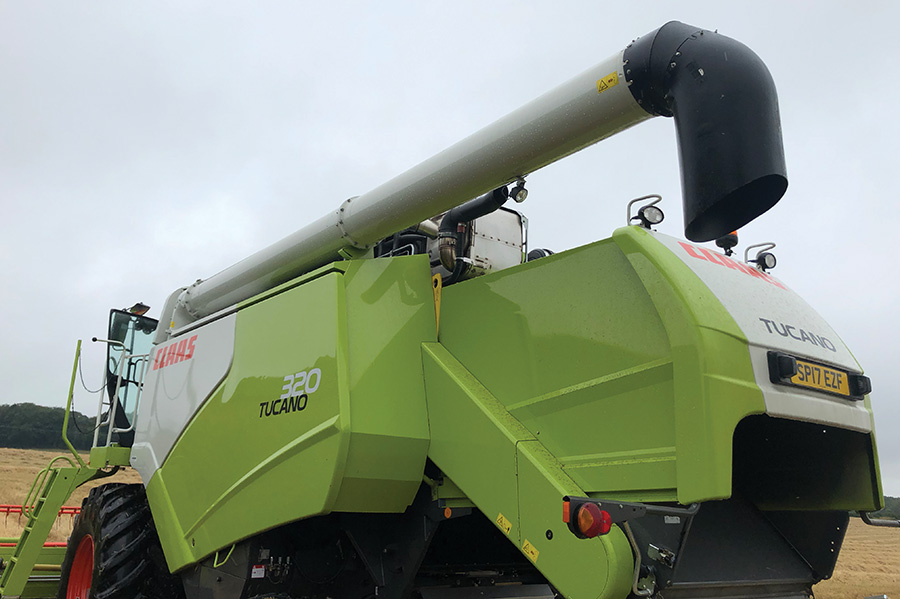 If I was buying a new one, I’d possibly spec the APS drum to improve the crop feed and reduce barley skinning, as I find it can be tricky to get the one-drum setup running perfectly.

We grow Laurette and I aim for as little skinning as possible, but sometimes there is nothing you can do to stop it.

I also had the moisture meter changed in the first year, as it was reading erratically on slopes, varying by 8-10%. It’s been no problem since, though. 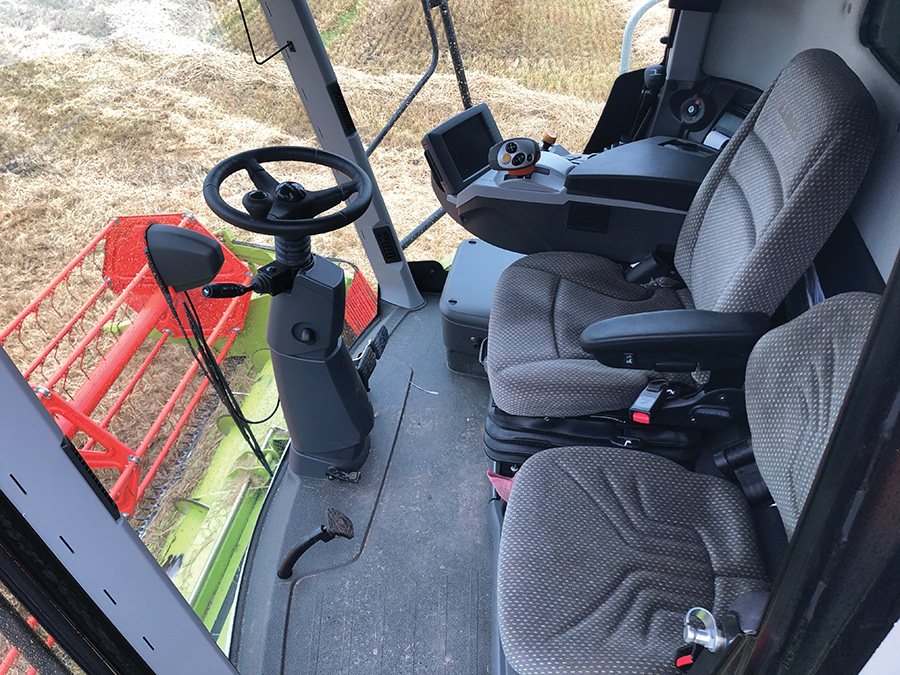 I do find the forward speed a little steady, even in good crops. I average about 2.8kph when the straw is green in wheat and can push on to 4kph in barley.

Last year I upgraded the grain pit at the farm to increase capacity. This was always the limiting factor for output, as the pit used to be full from a single combine tankload, but it can now hold a full trailer, so there is no waiting once I’ve tipped. It might allow me to run a slightly bigger header in the future, too.

Running my own machine means I can choose to cut only when the weather is good. We tend to leave it until the moisture drops to 18% or below, though in wetter years we will cut crops at anything up to 21%.

It’s a trade-off, because I have to factor in the drying costs and labour involved in dealing with wet grain, so cutting at high moisture rarely makes sense.

Being a five-walker machine, the straw quality is inevitably really good. We get big, fluffy swaths that dry quickly after rain, and the baler man hasn’t complained.

The 3D slope compensation on the electric sieves has been really useful as well. There are two buttons in the cab to switch between different settings – I have one set up for going up hills and then click the button at the top to switch to the downhill mode, which is really handy and made the sieves worth the money.

I use the chopper on all headlands and when the weather is particularly catchy, but most of it gets baled by a contractor who then delivers muck to be spread on the fields in return.

It does a decent job, but can leave the straw a little long, which is noticeable when I come to plough if it’s really dry. Maintenance is easy, as there are only a few 10-hour grease nipples and a majority of the others will be serviced in the wintertime.

I wouldn’t hesitate to buy another Tucano, but would like to have a look at the New Holland if I get a chance next time, albeit a few years down the line.

I’d also be tempted to move to a slightly wider table now that I have increased the size of the grainstore pit. However, the harvest logistics would have to change a bit, as I can currently cut every field at each farm without taking the 16-footer off – something that wouldn’t be possible with anything wider. Another nice-to-have extra would be the APS drum.

Where the 320 fits in to the Tucano range

The Tucano combine range is split in half, with the smaller 320 to 450 models fitted with straw walkers, and the bigger 550 to 580 carrying a single rotor. The 320 is the smallest five-walker Claas offers and props up the five- and six-walker machines.

Those after more modest harvesting capacity have to hop down to the four-walker Avero range, with cutterbars from 3.7m to 6.1m.