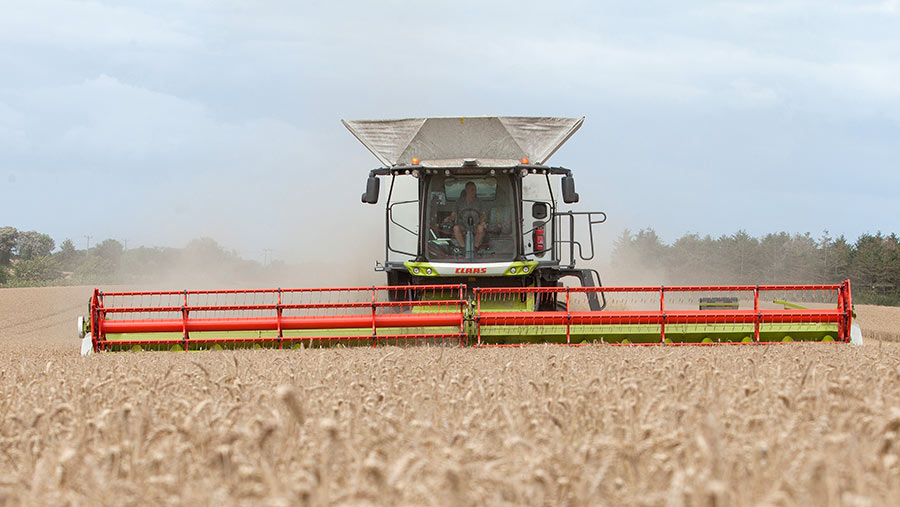 Kent farmer Richard Ledger is one of several UK growers to have run a pre-production version of Claas’ latest range-topping Lexion combines.

We get the verdict from driver Nigel Richardson.

What made you choose a Claas Lexion?

We’ve had the biggest Lexions on offer for the past 15 years to allow us to cover our acreage with just one combine.

We’ve always got on well with them and if there’s ever an issue then we get really good service from the Kent Harvest Centre.

Knowing that this new range-topper was going to be significantly more powerful was reassuring – we wanted it to run comfortably without struggling for power.

Chopping straw on banked ground, our old 780 could run out of puff.

But you’d expect that given it’s 790hp, which is nearly 25% more powerful.

In fact, I’ve had to set the Cemos auto settings computer to maximise throughput rather than concentrate on quality.

I then let it make its own mind up about how best to set everything and it alters things as it sees fit.

Even in laid, trashy crops, what’s coming into the tank is pretty immaculate.

Fuel-wise there’s been a significant improvement, too. It has got the same size tank as the 780 but it will go a lot longer between fill-ups.

Previously, in heavy-yielding crops, I’d manage 10 hours pushing the 780 to the max.

Now, it will stretch a further three hours so we don’t have any stoppage time in the day.

A lot of that is down to the front end of the threshing gear – the bigger diameter drums and impeller are able to run slower while maintaining the same tip speed, so the flow of crop is that much smoother without the peaks and troughs you would normally get.

For most of the season the straw quality was excellent and you couldn’t tell the swath hadn’t dropped out the back of a straw-walker machine.

But towards the tail-end in well-dead, bone-dry standing wheat, like any rotary it did tend to start to smash the straw up a bit.

Because we’re running a 12.3m (40ft) header and these biggest Lexions can be fitted with 45-footers, the chopper is designed to handle more material and fling it out wider than we need to.

So it’s shut down from its maximum and, in reality, is never really stretched.

It does a decent job with both chopped straw and chaff.

It’s amazing really that it can send such lightweight stuff out evenly to that distance.

Given that the 8900 is a pre-production machine here with us for field testing, it’s been remarkably reliable.

The biggest issue we had was with the folding bubble-up auger.

The gas strut and turnbuckle arrangement that raises it in time with the tank lids opening snapped.

It didn’t stop us for long – zip-ties sorted it temporarily and Claas came out to fit extra bracing to stop it happening again.

Early on we had chaff building up between the impeller and the body of the combine, but that too was sorted with some rapid in-field modifications.

Other than that there were a couple of minor electrical gremlins and a leak on the air seat that meant I had to pump it up every now and then – hardly major problems.

There’s not a great deal. I intend to fit some lights on the back of the header to make hitching up easier in the dark.

There’s a guard over the axle that could do with being quick release to help with cleaning down, too.

The swing-round steps aren’t as good as before – they’re lacking a left handrail and won’t always stay latched in place.

Being a pre-production test machine, these issues have all be reported back to Claas and should be sorted over the winter.

There has been quite a big redesign of the engine bay and the drive pulleys so that all the surfaces are smoother with fewer places for dust to hang up, meaning we’re not having to blow down as regularly.

That has made a big difference but there are smaller things, such as the panels that no longer tend to drop rubbish down the back of your neck when they swing up, and the sweeper bar in the stone trap that means you don’t have to get underneath it to clear it.

There would have to be a fairly major failure with the dealer to ever see us shifting away from Claas for combines.

They offer superb backup and really know what they’re talking about when it comes to sorting issues, even on pre-production machines.

The 8900 is a significant step up from what has gone before, particularly from an operator’s point of view.

With its rubber belt intake conveyor and redesigned unloading auger driveline, it’s so much quieter than before.

But more important than that, it’s able to cover the ground quicker, burning less diesel and, with a 40kph road speed, massively cuts down on travelling time.

I’d definitely choose another one.