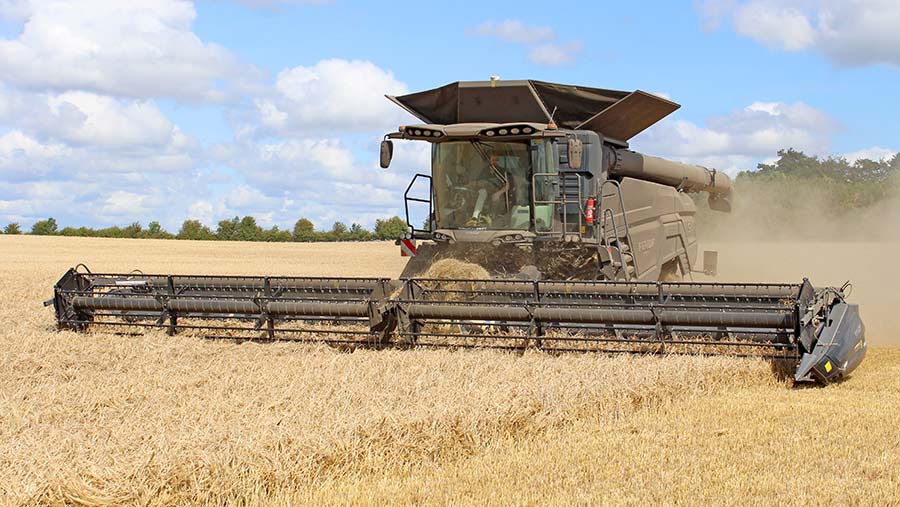 The Ideal 9T is the flagship model of Agco’s new Ideal combine range that’s offered in both Massey Ferguson and Fendt guises. One of the first farming businesses to take delivery of a new machine was Wiltshire enterprise SB Farming.

To find out how its top-spec Fendt model is performing and whether it can compete with the Claas Lexion it has replaced, we visited when it was chomping through some ripe wheat and got the views of owner Steve Benson and operator Will Owen.

What made you choose a Fendt Ideal 9T?

Steve Benson I’ve been buying tractors from Lister Wilder for years, and they have had several goes at convincing me to buy a Massey Ferguson Delta.

I’d never been keen on them though, and they didn’t have the best reputation for reliability.

However, when the Ideal came out, I thought it looked like a massive step up and the launch happened to coincide with one of our Lexions coming up for a change.

There weren’t many of them around last year and I wasn’t willing to put my name down on one until I’d seen it working. Therefore, I took a last-minute jaunt up to Lincolnshire in late August to see a demonstrator 9T in action.

I was suitably impressed that I agreed to have one the following week. It was a bit of a leap of faith, as they couldn’t even give me a confirmed price. But numbers were limited and I had to put my name on one if I wanted it for the 2019 season.

Initially it looked like the first models were only going to be offered on lease agreements – I’ve never been keen on that – but luckily I was given the option of buying one on finance instead.

Will Owen It’s easily the highest-output machine we’ve got and will cut a lot more in a day than the old-type Lexion 770 with 40ft header I used to drive.

In good crops of wheat, we’ve been reaching cutting speeds of 8kph and managed to hit spot rates of 95t/hour, which was checked over the weighbridge.

Obviously, the average is a good bit lower than that and like every machine, the speed has to be dropped right down for cutting laid crops and brackled barley.

But in those situations, the Powerflow header has made a massive difference to crop flow. With standard headers – like we have on the Lexions – we have to rely on a bit of forward momentum to help get the crop to the auger, and that means you end up going a bit faster than you’d like to get an even feed.

But with the Powerflow belts the crop feeds evenly, whatever state it’s in, meaning you can really crawl along.

In tricky conditions I tend to drive the combine manually and adjust the settings as I see fit, but in good going I’ll use the Harvest Plus system to help get the most out of it.

I usually start by getting the losses to an acceptable level and then set them as a target, along with an optimistic forward speed. The system then takes over and keeps the combine at maximum output, without pushing the losses up.

But one of the most impressive things is the speed of the unloading auger. The tank holds about 13t of wheat and it’s capable of emptying the lot in 80 seconds. On the full-power setting it’s too hairy for filling a trailer, but it’s ideal for using with our 18t chaser bin.

As for the cab, it’s bigger and more comfortable than anything else we’ve tried, with some fairly slick controls. However, it’s quite a different set-up to a Claas so it was a bit like learning to drive a combine all over again. Some of the settings are buried deep in the screen too, so they can take a bit of finding.

One pretty neat thing is that you can connect a tablet to the system. This can be used to view or alter some of the settings and means you can give it to someone outside the combine when setting it up to reduce losses. However, most of the time I have it in the cab as a secondary screen.

There’s also a fancier version that has acoustic sensors throughout the machine to keep tabs on crop flow at various different points in the machine. 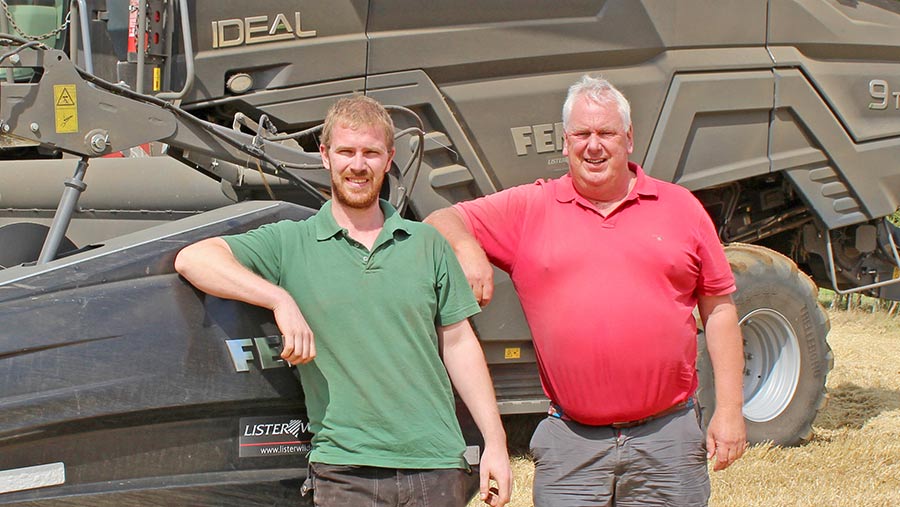 Will Owen, left, and Steve Benson

Straw quality is far superior to our Lexions, but the settings can need adjusting to get it as good as possible. I’ll often start with the factory pre-set for the crop and then open the concave a bit. I often end up opening the top sieve a bit to reduce the losses, too.

It seems to be a good system and manages to cover the full 12.2m header width. There’s also a feature that allows me to change the angle of the vanes and get the spread pattern even.

It will even compensate for wind direction and has a mirroring function that automatically flips the settings when the machine turns around on the headland.

Handily, all these settings can be engaged and adjusted without having to get out of the cab.

There have been a few teething problems, but that’s to be expected when you’re running something so new – you have to accept you’re going to be a bit of a guinea pig.

However, we’ve never stopped for long, as Lister Wilder had a standby machine all season that was used as a parts donor whenever ours gave trouble.

Most of the niggles so far have been in the header driveline. The main drive gearbox seized up and we had a problem with straw wrapping around the shaft coming out of the intermediate gearbox, which caused a seal to fail. Nick Dwight at Lister Wilder sorted it by making a guard to cover the shaft.

All the main parts of the machine are pretty well sorted, but there are a few bits and pieces that need improving, such as the reliability of the header driveline.

Another problem is that it’s impossible to cut any crop with the tank closed. Open, it stands at 4.8m tall and that means we can’t get under some of the power lines on the farm and we have to draft in another machine to finish off.

There are also a few slightly trivial things in the cab that could do with improving. It sounds a bit silly, but there’s no park position on the wiper, which means you have to switch it off at the correct position every time. The fridge doesn’t get that cold either and the hands-free system is pretty poor.

When we first had the combine it came with an extra-long controlled traffic farming (CTF) compatible auger, which was a complete pain. It stuck out at the rear of the machine about 15ft and made it incredibly difficult to manoeuvre. It was swapped for a shorter one, which is more manageable.

Steve Benson If the deal was right I’d definitely consider having another Ideal. It’s the highest output combine we’ve ever had, Will says its good to operate and the Powerflow header feeds brilliantly.

However, we also run three Claas Lexions and we’ve been happy with them too, so it could go either way. 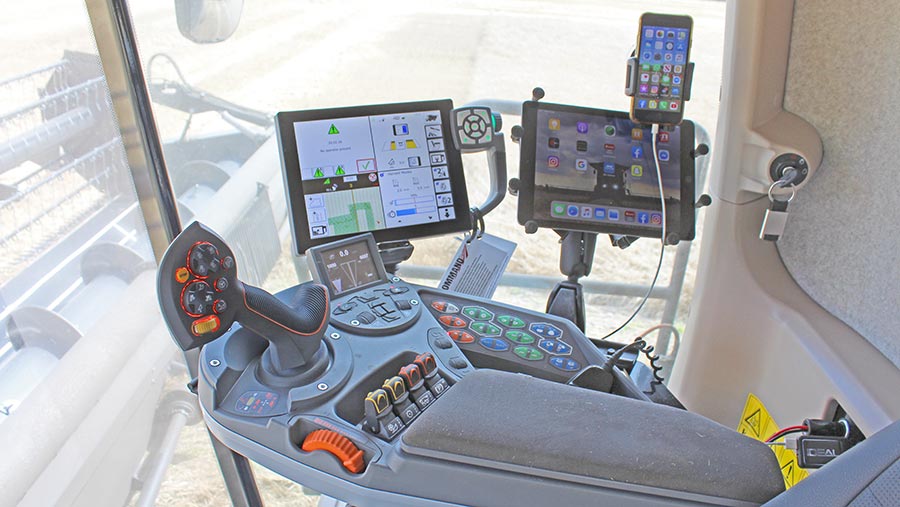