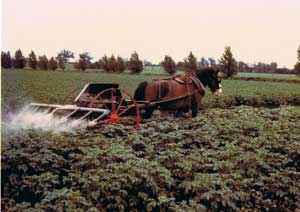 Comfort, convenience and driver safety are high on the priority list for today’s equipment, but anyone using tractors and machinery in 1934 was not so fortunate.

One of the 1934 essentials was a stout pair of boots, as field work usually meant walking behind a team of horses.

The number of tractors on UK farms reached a mere 32,000 in 1934 – less than 10 per cent of the current total – and most of the field work was carried out by the 700,000 horses still working on farms. With fewer than 50 combines in the entire country, the idea of owning one remained a pipe-dream for most UK farmers.

Making the operator’s job easier, safer and more productive is just one of the ways tractor and machinery design has progressed. There have also been massive increases in power and output, while today’s equipment operates with much more precision than ever before.

The surprise is that, when measured against labour costs, a 2009 tractor is less expensive per horsepower than its 1934 equivalent. With a £156 list price, the 1934 Fordson cost £6.78 per horsepower, equivalent to 3.8 weeks wages for a farm worker on the £1.80p weekly average basic wage.

To check 75 years of progress we compared specification and performance data for 1934 and 2009 examples of three equipment items that were available then and now.

The Fordson Model N was Britain’s top selling tractor in 1934, so that is our baseline. We compare it with a New Holland 7040 with a 200hp engine, a power output that’s becoming increasingly popular.

The Fordson’s sole concession to comfort was a sprung, steel seat, and the only safety equipment was a pedal operated transmission brake. Inside the safety cab of a 200hp tractor expect to find enough goodies to satisfy even the most jaded operator, often including air conditioning and cab suspension.

With vague steering and the choice of only three forward speeds, precision is not one of the Fordson’s virtues, but your new 200hp tractor will be part of the precision farming revolution. Expect features such as electronic linkage control, “cruise control” automatic maintenance of speed settings, plus auto steering options offering rate control possibilities.

Horse-drawn sprayers were available during the early 1930s for applying simple crop chemicals such as Bordeaux mixture for blight control. Our comparison is based on a mid-1930s Chafer sprayer and one of their latest Sentry trailed models.

Operated by a crank on axle

Although spray chemicals available in the mid-1930s were often highly toxic, safety equipment like protective clothing was non-existent.

Controls on modern trailed sprayers operate from the tractor cab and the sprayer must carry a specified volume of clean water. Larger capacity models also have a locker for protective clothing, while steps and an access platform make tank access safer.

Application rates on early sprayers were notoriously inaccurate, in some cases up to 50 per cent adrift, but the latest automatic rate control equipment together with boom levelling and, in many cases, GPS adjusted variable rate control mean barely a ml is out of place.

The first combine harvesters were built in America in the early 1900s and were pulled by steam engines, large teams of horses or mules, and used land-wheel drive for the cutting and threshing mechanism. In the early 1930s tractors provided the pulling power and an auxiliary engine drove the mechanism. UK customers relied mainly on American imports, including the J I Case Q model featured, which we compare with a high capacity Case 9120 current model.

During the 1930s combines and tractors shared a similar disregard for operator comfort and safety. Combines went a step further because the sacks used on the bagging platform were often the large capacity size that, when full, were almost double current weight limits recommended for manual handling.

Cab comfort and convenience are now the subject of fierce competition between leading manufacturers, and modern tanker combines can harvest close to 100t/hr.

Automatic steering is available on most mid to high capacity combines to maintain the optimum cutting width, and the cutting height can be automatically adjusted for precise contour following. Precision on some models is also helped by an automatic control that adjusts the forward speed to variations in the work load.