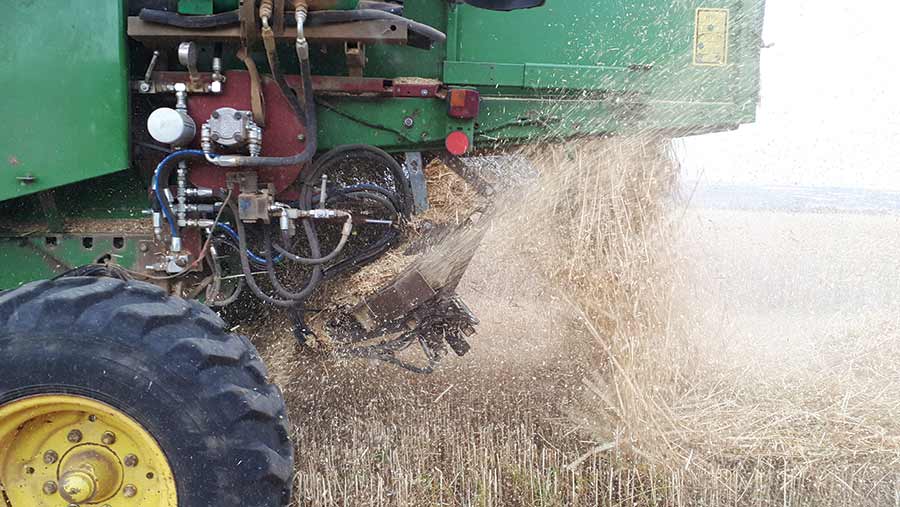 Earlier this year, we featured the Harrington Seed Destructor – an Australian invention that fits to the tail end of the combine to grind down weed seeds harvested with cereal crops before flinging them out with the rest of the surplus material.

However, the prospect of shelling out £93,000 on a product that is so far unproven in the heavier crops of western Europe will have most British arable farmers wincing.

Step forward Kevin Buckland, who has been developing a similar system since 2012 for Grange Farm in Bredon, Gloucestershire, but for a fraction of the price. 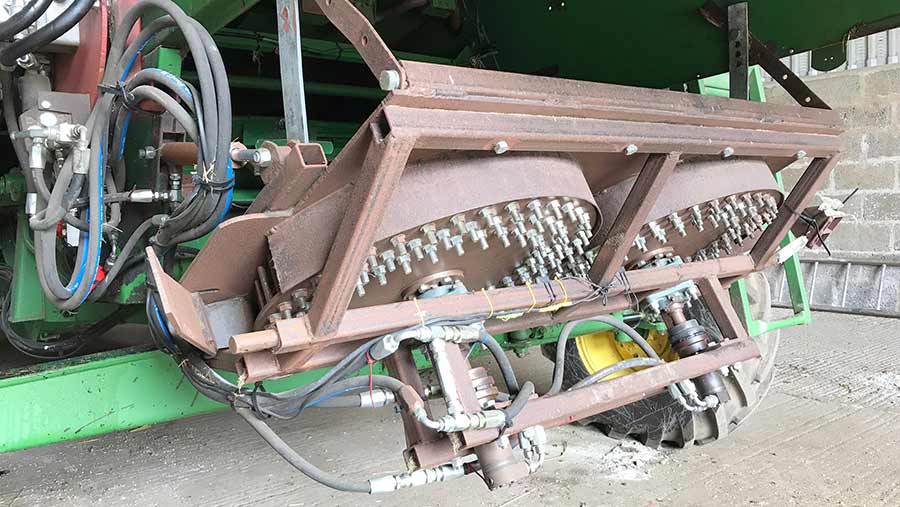 The aim was to limit the spread of seeds from the back of the combine, in similar fashion to Ray Harrington’s weed crusher.

So, armed with a princely £2,000 parts budget, Mr Buckland designed his own pin mill system that carries one spinning disc and a second static one sandwiched together with bolts to crack the grains in the chaff before throwing them out the back of the farm’s John Deere 1177 combine.

The starting point was to source the disc-shaped, 8mm-thick plates that form the top and bottom of the pair of pin mills.

These were laser cut by a local engineering firm and then dotted with 75mm-long M12 bolts.

In total, there are three rings of bolts threaded into the plate on each rotating disc and two loops on the static side.

Each pin sandwich is wrapped in tin to form the mill walls, with short sections of angle iron mounted inside to create a corrugated effect that keeps the chaff on the move.

To prevent straw bridging across the top of the rotor, Mr Buckland fitted three flexible tines taken from an old JF mower conditioner.

These spin with the top mill plate and constantly stir the material as it falls from the straw walkers, which is particularly handy in damp barley crops. Their flexible nature means they shouldn’t break, either.

A fourth conditioner blade is mounted vertically into each mill to help agitate potentially cloggy material where cereals crops have been undersown with red clover or mayweed is particularly prevalent.

The 320ha block at Grange Farm went organic back in 1999 and, says manager Carl Gray, maintained pretty clean fields up until 2012.

However, the following year was wet and the weed burden boomed, supressing light to the crops and decimating yields by more than half.

One of the most obvious preventative measures was to stop distributing the viable weed seeds during combining.

At the time, Ray Harrington’s seed destructor was in early development and designed as a trailed unit with its own engine, which made it far too cumbersome for the farm’s smaller fields.

Instead, the team decided to try to integrate a similar design onto the farm’s John Deere 1177 combine.

Later that year, Mr Buckland knocked together a prototype version of the pin mill that was far simpler to engineer than the Aussie-made cage mill.

After running it up, a sample was sown in a greenhouse and left to germinate. There was a huge reduction is viable weed seeds, so it was on with building the real thing. 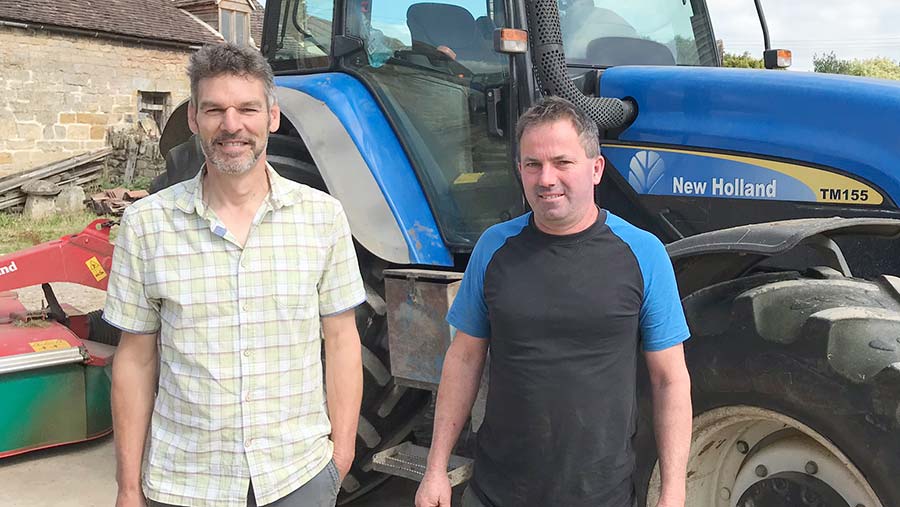 Drive to the redundant straw chopper is used to power a separate hydraulic circuit for each mill using a brace of 12cc motors.

It tends to sap about the same amount of energy as the old chopper unit, which makes the 160hp combine work hard, as it also has to run a 20ft header (standard models have a 16ft table) to fit the farm’s 6m tramline system.

The mill rotors typically spin at about 1,200rpm in work. This figure can be monitored in the cab through a nifty setup that uses a pair of push bike speedos sourced at £5 apiece from Halfords.

Cleverly, they’re calibrated by entering a wheel circumference of 1,667cm – so when the display reads 100kph, the rotor speed is 1,000rpm.

Gauges mounted on the frame outside the cab door show the pressure in each line, which helps the driver keep on top of any potential blockages.

An over-run valve is plumbed into each system to take away the strain as the rotors slowly spool down and there are also pressure relief valves set at about 2,500psi.

Other parts of the hydraulic circuit include an oil reservoir that was once a 250-litre air compressor tank and an oil cooler taken from an old Same tractor that sits in front of the combine’s radiator.

The temperature of the oil in the reservoir has to be periodically checked to make sure it doesn’t exceed 90C. If things start getting hot, there’s a diverter tap to force a greater proportion of oil up to the cooler. 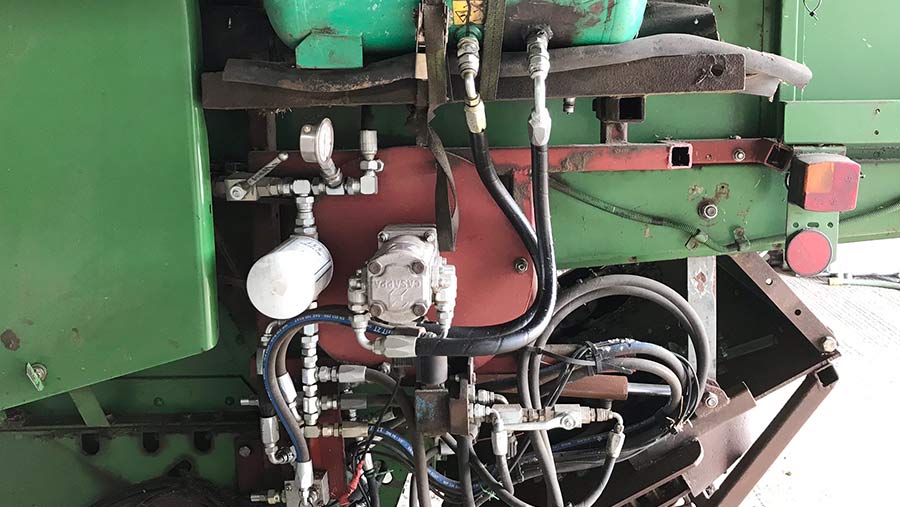 The modestly sized mills don’t have the capacity to process all of the material falling from the back of the combine, so getting them in the right position is key to avoid blockages.

They can be shunted forwards and back by hydraulic rams, or pushed right out of the way in crops that are too thick or damp.

To do so, the rams pinch oil from one of the two hydraulic motors and there is a tap to lock the milling unit completely out of the way if needs be.

Generally speaking, the lightest material is thrown over the top and heavier debris falls to the ground in front of the bolt-on unit, but there is no way of telling exactly what percentage of weed seeds are dropped into the spinning pins.

To improve consistency, Mr Buckland dabbled with different funnel arrangements, but eventually decided that they limited the flow too much and couldn’t cope with the volume of material coming out the back of the combine.

Once processed, the system throws the chaff almost across the width of the header using deflector plates on the outermost points of the mill. 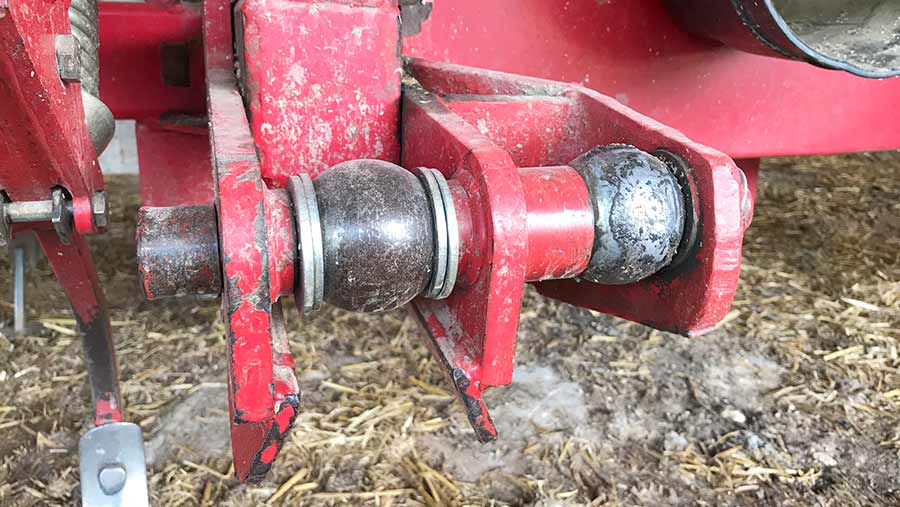 With no chemicals at its disposal, mechanical weed control is key to the farm’s arable success.

Their search for the perfect drill for an organic system took them to the Chameleon – a Scandinavian design that uses a hydraulic side-shift on the main frame to move the coulters half a row width across to double as an inter-row hoe.

However, the 3.65m transport width all but ruled out contracting opportunities, which would have been vital in justifying its £100,000 asking price.

Instead, they shopped a little closer to home. Weaving’s tine drill has remained a popular choice for farmers looking for a lightweight, low-cost drilling outfit and, using RTK guidance, can be adapted into a versatile machine for organic systems.

Building on a neighbour’s idea, they set about the work by removing half of the legs to double row spacing to 23cm. Knock-on Bourgault points (similar to Claydon’s) were added so the crops are sown in 3-4in bands, rather than in a row. The legs were switched to a more defined S-shape to improve working depth consistency, too.

Weighing just 1,300kg, the drill is also far better suited for work as an inter-row hoe than the heavier-set Chameleon, particularly with Mr Buckland’s nifty mechanical side shift that sees the tractor hook up to a second set of ball hooks attached to the side of the main ones.

In hoe mode, the Weaving drill is fitted with home-designed triangular feet made of Hardox plate that sit just below ground level on thin stalks to save throwing too much soil over the standing crop.

In well-established crops, the hoe is used in conjunction with a 6m CTM Weed Surfer originally designed for controlling sugar beet bolters. It runs like a topper about 8in above the crop – useful for wiping out wild oat heads – at about 5-7kph depending on the thickness of the weeds. 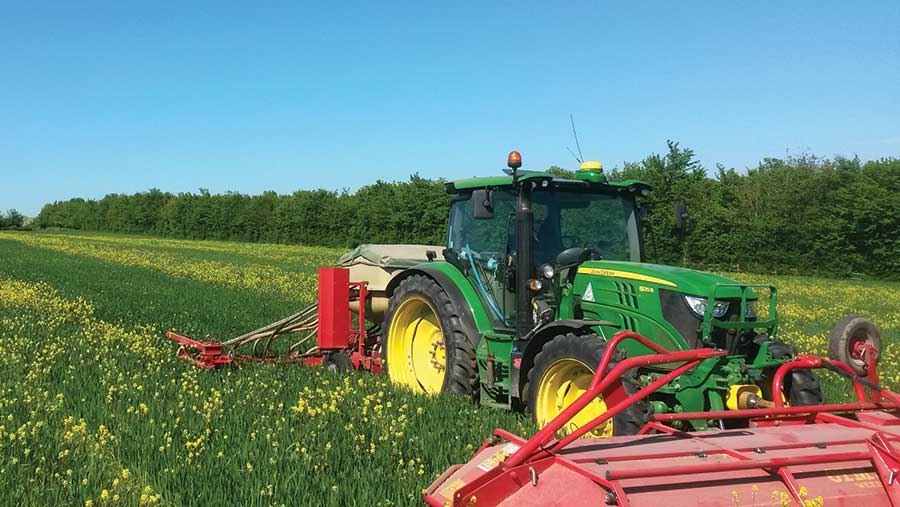