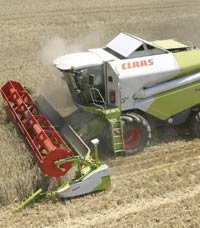 Skilled combine driving is going to be more vital than ever if this year’s harvest is anything like as damp as last year’s.

That’s the view of Diss, Norfolk, combine training specialist Tony Gardiner, who has been teaching combine drivers how to do the job better for over 40 years.

Pre-season training takes place in spring and early summer, Mr Gardiner then visits each driver during harvest and does a 2 hour assessment of their technique and machine settings, including how much grain is lost and whether they’re driving at the right speed.

The combines range from brand-new models to ones that are 10 years old and cover all makes. Moreover, last year’s assessments had to take account of higher-than-normal grain moisture contents and a lot more laid corn than usual.

Once he has done the assessment, Mr Gardiner suggests changes to settings and speeds and compares loss rates and throughput before and after.

The differences can be striking. Before training, grain losses across the 61 combines averaged 400kg/ha in the early part of harvest. On a typical 400ha (1000-acre) cereal farm, with feed wheat at £100/t, that equates to £16,000 of lost income.

After training, says Mr Gardiner, average losses dropped to a much more reasonable 45kg/ha. That’s the equivalent of £1800 of lost corn on a 400ha farm.

Individual drivers can sometimes be running at much higher losses than this. Six drivers out of the 61 were losing more than 1t/ha in bad conditions, says Mr Gardiner. This was reduced to under 200kg/ha after training, saving 800kg/ha.

In many cases this was due to the wet, laid (and often grown) corn that dominated the 2008 harvest. Deep, wide tramlines were also a point where losses tended to soar. But Mr Gardiner points out that even in wet, difficult harvesting conditions, good technique and operator skill can cut losses sharply.

Forward speed is another issue that raises its head each year. Most operators are simply driving too slowly and average forward speeds after training were 33% higher then they were before.

“Often it’s natural caution,” he says. “The boss has told them how much the combine costs and they want to treat it gently. But cutting a third slower than you need to can mean the difference between having a seven-day harvest and a 10-day harvest. It will affect threshing and cleaning of the sample, too.”

Those running older combines will be pleased to hear that age is no bar to efficiency, either. In fact the second best combine in the 2008 survey was an eight-year-old model. “It does need to be well maintained and well-set, though” says Mr Gardiner.

Costs of the training range from £100-£250 a day depending on distance and whether Mr Gardiner comes to you or you go to him. This cost can be recouped very quickly, he says. At the average rate of loss and forward speed it takes just 45 minutes of combining to pay back the cost of the training.