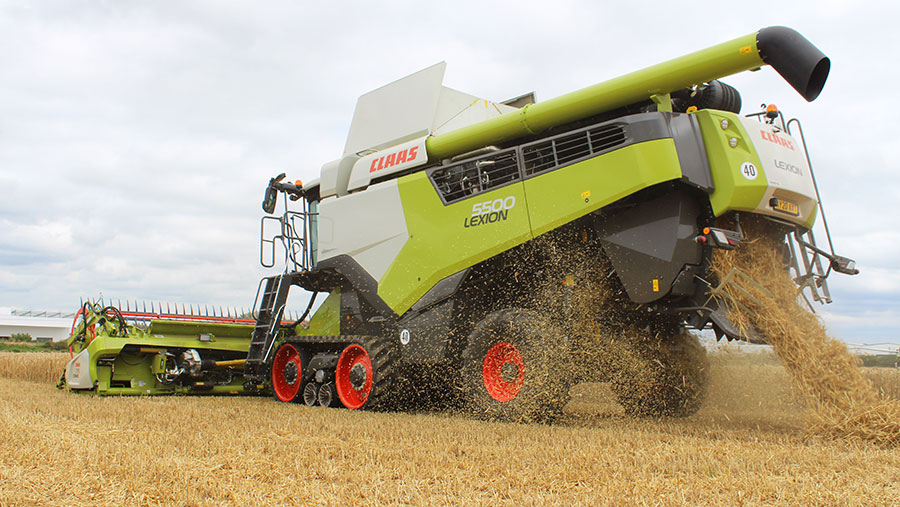 Hot on the heels of last year’s hybrid Lexion launch, Claas has introduced revamped versions of its premium-spec five- and six-walker combines.

The 5000 and 6000 machines will replace the current Lexion 600-series from September, and they feature bigger engines, improved threshing and the promise of considerably higher output.

To this end, the firm has added a pair of larger six-walker combines – the 6900 and 6800 – that claim to rival some of the smaller hybrids for output, without compromising straw quality.

Headline performance figures for the flagship 6900 include a power output of 507hp from its six-cylinder MAN engine, a 13,500-litre grain tank with 180-litre/sec unloading speed and the option of cutter bars up to 12.27m (40ft). 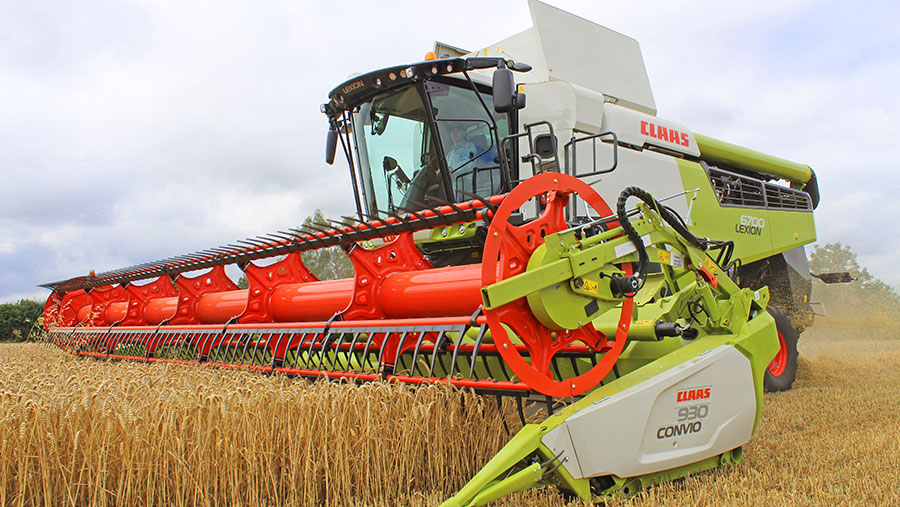 Claas is yet to release official performance figures for this machine relative to hybrid equivalents, but apparently one test operator has been getting comparable output to his previous-generation Lexion 750.

Engines in the rest of the 6000/5000 range are sourced from Mercedes Benz and short of power outputs, grain tank sizes and unloading speeds, they share largely the same internals.

Six-walker 6000 models are based on a 1.7m-wide threshing system, while the five-walker 5000 machines use a 1.42m platform. But other than that, they work in the same way.

To smooth crop flow and boost output, Claas has made some significant changes to the threshing system, which it now calls APS Synflow.

This setup has the usual pre-threshing accelerator drum at the front, but there is a larger 755mm-diameter main drum – 26% bigger than the one used in the previous range – and a new 600mm secondary separator drum.

Including the impeller, which helps straw flow onto the walkers, that means there are four separate drums at the front of the machine. Total concave area on the five-walker models adds up to 1.3sq m – a larger space than the current range-topping 670 – while the six-walker models have shot up to 1.55sq m.

This new setup means just 10% of the separation job is carried out by the straw walkers, which means there is a lower risk of walker grain loss when pushing the machine on or when working across steep ground. 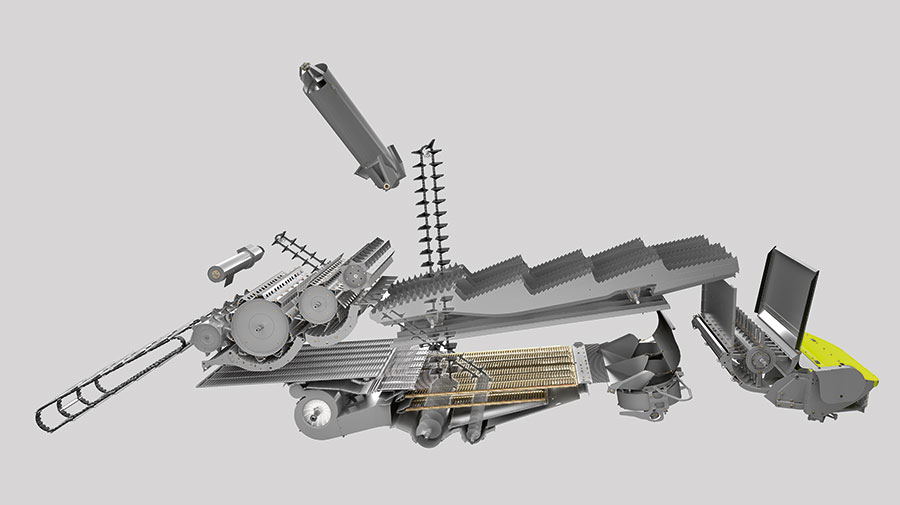 As well as upping the separation area, the diameter of the drum has allowed engineers to reduce the wrap angle of the concave. The theory is that this gives the straw a smoother path through the threshing system, minimising damage and reducing fuel consumption.

It has also allowed the drum speed to be lowered to a 330-930rpm range. This is because the rasp bars travel at a higher speed relative to the centre shaft, so a lower input speed is required.

Drum speeds are adjusted using the Cebis in-cab terminal, and the system automatically synchronises the setting across all drums.

Concaves are also adjusted simultaneously, but there are a number of additional features to play with. These include a hydraulic, pivoting concave bar which can be pushed into the crop flow between the main concave and the separator when additional threshing power is needed.

At the other end of the spectrum, the rear of the separator concave can be dropped to help keep brittle straw in one piece.

To deal with the higher volumes of grain pouring into the cleaning shoe, Claas has decided to fit the Jet Steam cleaning system, which was previously reserved for bigger hybrid machines.

It’s a considerably more powerful setup and, depending on whether it’s a five- or six-walker model, six or eight turbine fans blow large volumes of air through the sieves.

The higher output of the threshing and cleaning system has also meant the capacity of the clean grain and returns elevators have been increased.

All models come with the firm’s Dynamic Power system that adjusts engine output according to load. Once engaged, this attempts to reduce fuel consumption by switching to a lower power curve whenever the combine is having an easy time of it.

However, when the tank needs to be emptied on the move, the straw chopper is put into gear or, if the crop thickens, it will automatically increase power to the appropriate level.

The extra power and bigger threshing system has also prompted engineers to upgrade the main driveline to the same pre-tensioned system used on Jaguar foragers. This is stronger, gives a quicker uptake of drive and apparently extends belt lifespan.

By pushing the rear of the cab frame back, Claas has been able to give operators a good bit more space to play with.

Views into the grain tank have also been improved, thanks to a larger glass panel, and even though there’s an option of a camera to monitor the returns, Claas has kept the old-school window in the cab.

The most significant change to the machine’s operation is a new touchscreen Cebis monitor that replaces the old dial-and-button model. This can be adjusted independently of the armrest and can be swung to the side so it doesn’t obscure views of the cutter bar. 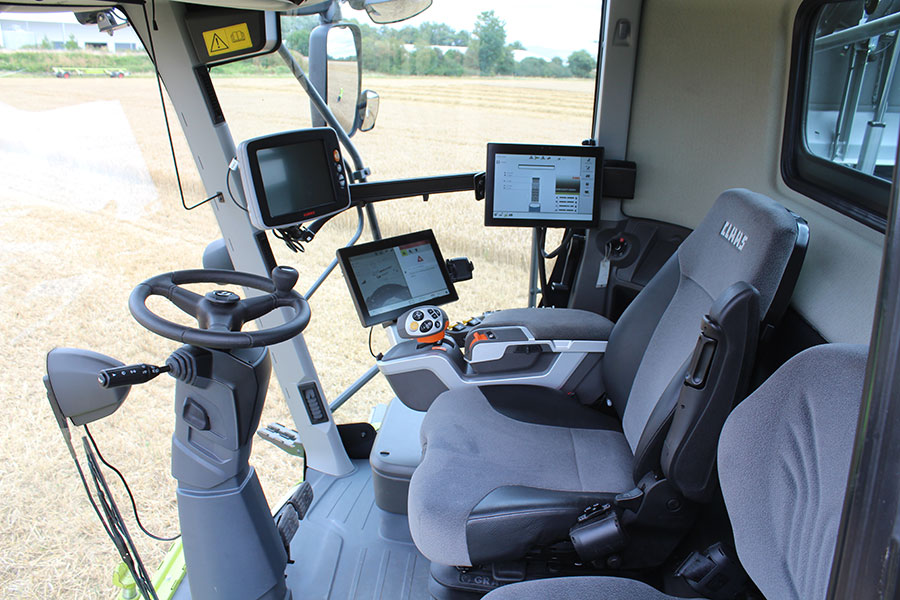 Optional auto threshing and cleaning systems are also controlled by the new screen. The former uses information from a grain quality camera and the yield-monitoring system to adjust concave settings and drum speeds, while the cleaning element changes fan speed and sieve settings.

Yield monitoring has also been improved by switching to a system that uses a pressure sensor in the grain elevator to record yield without needing a thousand grain weight figure.

According to Claas, this method of measuring mass flow rather than volume significantly improves accuracy and means it only needs calibrating once a season.

Another new piece of technology is the Field Scanner laser guidance system, which is mounted on the cab roof. This is more accurate and simpler to set up than the firm’s Laser Pilot system (which is still available).

To make it easier to see the header in dusty conditions, there’s also a feeder-house dust and chaff extractor that draws material away from the driver’s eyeline and blasts it onto the ground.

Buyers of five-walker Lexion combines now have the option of Terra Tracs for the first time. The two smallest models – the 5300 and 5400 – are only available with wheels, but the 5500TT is a track-only model. 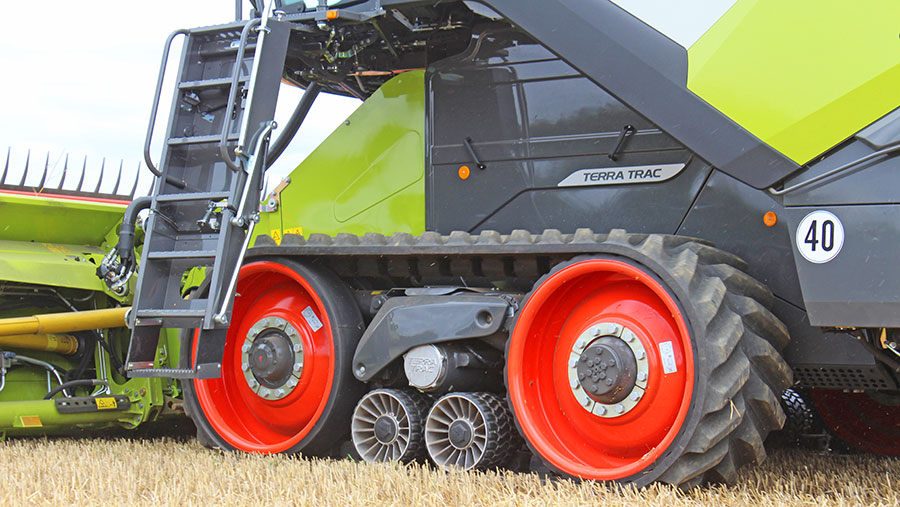 As for the six-walker combines, all bar the smallest 6600 are available with rubber track units. There’s also now the option of fitting 42in rims with 680mm tyres, meaning even the biggest 6900 wheeled machine can come in at just 3.5m wide – the same as the TT model.

Regardless of whether they’re specced with wheels or tracks, the combines come with a 30kph transport speed as standard, with the option of increasing this to 40kph.

Order books for the 5000 and 6000 Lexions open in September, which is when the firm will be releasing list prices, and machines will be delivered in time for harvest 2021.

As yet, none of the new Lexion models are being built with the Montana hillside levelling system, but this will be introduced in the next couple of years. Currently, it’s only available on the firm’s lower-output Tucano range.