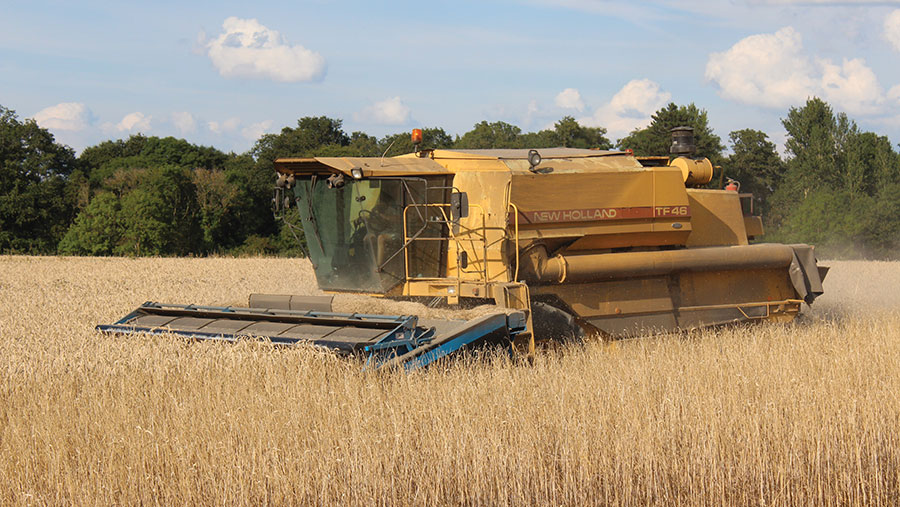 Canadian outfit Farm TRX has developed a relatively cheap retrofit yield monitor that is able to generate downloadable crop performance maps via apps that run on a standard smartphone or tablet.

The three-part £1,500 system includes a pair of optical sensors fitted to the clean grain elevator, which are hardwired to a mouse-trap-sized processor that mounts in the cab.

This transfers live yield statistics straight to the user’s smartphone via Bluetooth, saving the potentially costly addition of an extra display.

Farmers can then upload this information via mobile data or wifi to a web app, which crunches the raw data to form corrected yield maps. These can be shared with agronomists and exported to other farm management software. 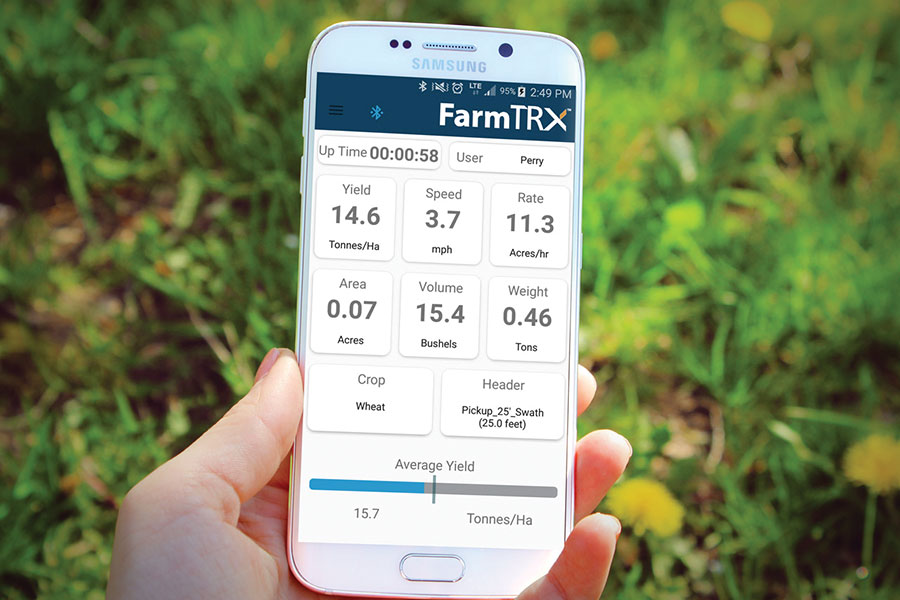 The system will be particularly handy for farms running old combines that won’t have been fitted with yield monitors, and it can be fitted using common tools in under four hours.

The maps can be used to assess variations across fields and the effects of agronomic decisions through the growing season, including cultivation type, sowing date and applications of fertiliser and pesticides.

The system was developed by Perry Casson, a farmer in the Canadian province of Saskatchewan. He had three combines without yield monitors and was keen to collect harvest data to assess the results of variable-rate trials he was conducting.

His research unearthed a dearth of reasonably priced retrofit yield monitors for old combines, so he set about building his own.

The first prototype was finished in 2015 and the system has since proved popular across North America, even on 1980s-built machines still in active service. Farm TRX even has the system working on a 1969 John Deere 105 and 1976 Gleaner L.

Standard mass flow optical sensors are installed on brackets pop-riveted to either side of the clean grain elevator. These send a beam of light that measures the volume of grain on each paddle.

This tends to be a more reliable method of yield monitoring than impact plate-style systems, says Farm TRX, though it doesn’t work on bucket-type elevators and it’s not possible to rig the processor up to a new combine’s existing optical sensors.

However, many models, including the Claas Lexion, use the same mounting holes.

The sensors run to an accuracy of +/- 5%, with a simple volume calibration using the combine’s grain hopper or a trailer, but precision can be improved to within 1% by calibrating using the weight of the sample. 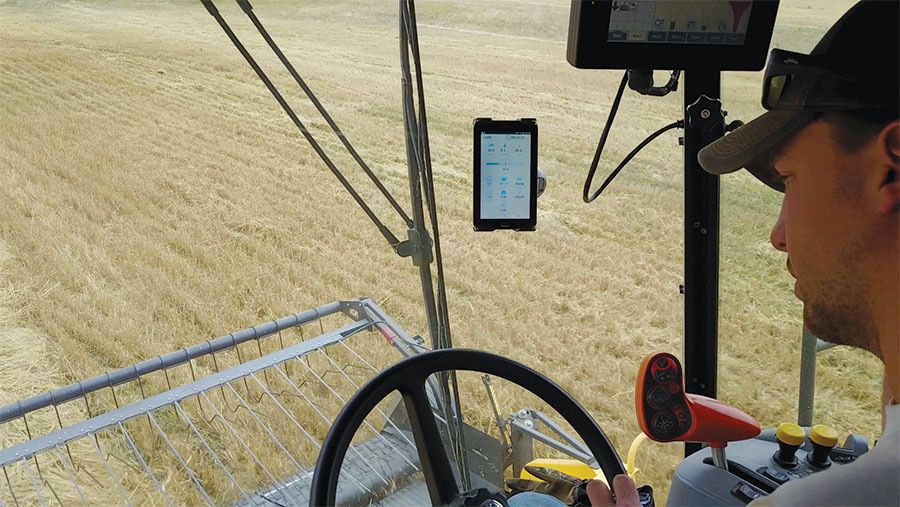 The kit also has a programmed time delay to account for the time the material takes to travel from the combine header to the elevator, and this can be fine-tuned in the app.

Handily, grain cleans them as it passes, too, so there is little need to polish them manually.

The company also plans to add a moisture-sensing function this year. The existing monitors are pre-wired to connect the necessary hardware and the apps are geared up to handle the data, so it will be a relatively simple bolt-on option. 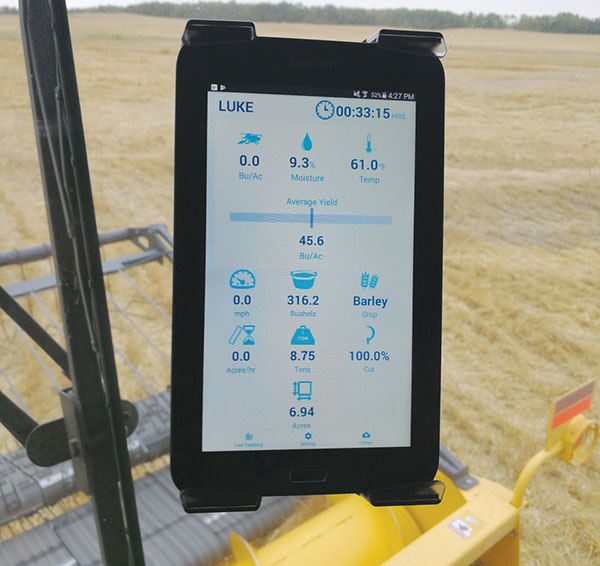 The sensors feed information to a little processor while the combine is turned on, provided it has been wired up to a switched 12V supply.

It has 16GB of on-board storage, which should be enough to hold more than five harvests’ worth of data.

The little box of tricks also contains an internal GPS antenna, so it needs to be mounted centrally in the cab in order to form accurate maps. The company suggests positioning it next to the light in the roof lining. 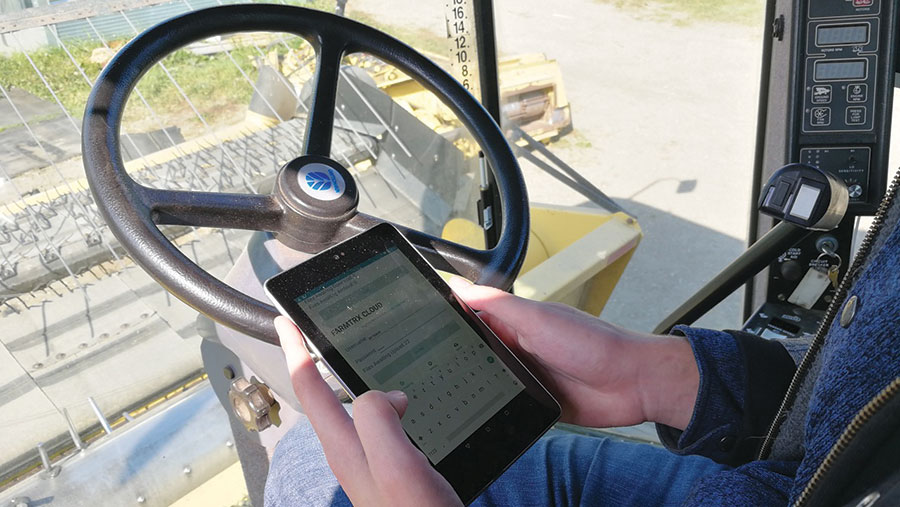 An external GPS antenna is included if the combine has a metal roof or if the user wants to simplify the installation – it just screws to the processor, which automatically turns off the internal GPS antenna. As an added bonus, this should improve the accuracy of the GPS position.

The processor connects to a smartphone or tablet via Bluetooth. Once paired, it feeds live performance stats through an app and also allows tweaks to the settings.

However, devices don’t need to be permanently paired – even if a phone isn’t synced, the system will still collect and store data on an SD card until it can be downloaded to the mobile device.

Most operators will run the system through their smartphone or tablet using the Farm TRX mobile app. As well as displaying live harvest data, it allows operators to fine-tune the settings, including crop type, calibrations and header width.

At the end of the day, or season, the data can be uploaded to the cloud to automatically form yield maps that can be immediately viewed on the company’s web portal and shared with agronomists. 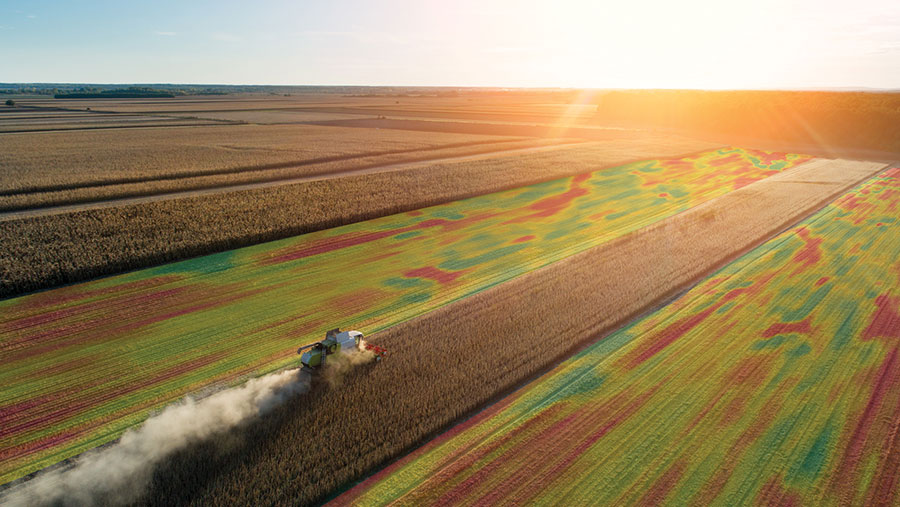 The built-in GPS point location means there is no need for operators to select which field they’re in while harvesting, and the system is also able to detect partial rows, wedges, headland turns and static in-field unloading points.

How much does it cost and who owns the data?

The kit costs £1,895 and is sold in the UK by Nick Abbey Digital Agriculture, based in Snainton, North Yorkshire.

The initial purchase price includes a year’s subscription to the web app, after which the annual fee is calculated based on the acreage the combine covers.

Choosing not to renew the app subscription still allows access to field boundaries and raw yield data, so it’s possible to monitor information on the display. However, it won’t clean, filter, calibrate and process the stats to form corrected yield maps.

The company says future software updates will be free, and farmers will always own the data they collect.

Nick Abbey also offers an installation service for £495 and sells accessories, including tablets and mounting brackets.

Topcon offers two retrofit systems, which run through a separate control screen. Both also provide moisture measurements and some degree of mapping capability.

The Yieldtrakk, launched in 2015, is sold in the UK by Cambridgeshire-based guidance specialist LH Agro.

It runs through Topcon’s Horizon software and is paired with one of the firm’s X25, X30 or X35 touchscreen monitors. That means that if the farm already runs one of its guidance systems, the outlay is far less significant.

The system offers plenty of detail, collecting yield information from a first set of optical sensors in the clean grain elevator and moisture from a second set near the bubble auger.

An ECU converts the measurements into simple statistics and also takes header width and terrain variations into account to produce more reliable yield maps. These can be exported to most farm software packages.

There’s also a Quantimeter version that is compatible with Claas combines, making use of the factory-fitted yield and moisture sensors with automatic cutting width-compensated mapping through a Topcon screen. This versions costs £2,320.

Price: £3,800 (including the monitor, fitting and calibration)

RDS MME, which has been owned by Topcon since 2015, sells the Ceres 8000i standalone yield- and moisture-monitoring system. 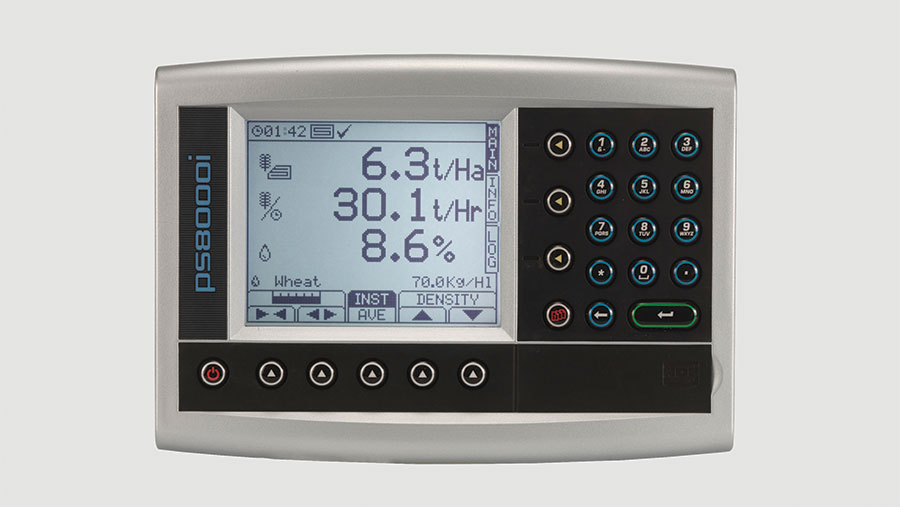 Like the others, it uses optical sensors to provide live spot rates and average wet and dry yield stats, as well as recording the tonnage of each crop type harvested.

This is stored on an SD card and, by adding the optional GPS16 receiver, yield maps can then be formed on third-party farm management software.