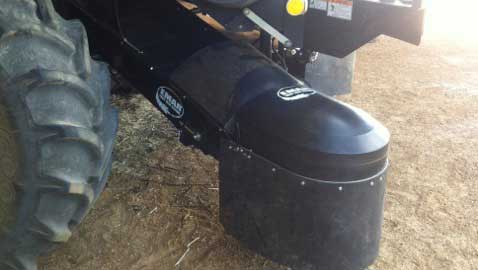 A revolutionary design aimed at increasing blackgrass control is being trialled on an Essex arable farm this harvest. The Chaff Deck has been designed, built and tested in Australia where it is already in use.

The Chaff Deck has been designed, built and tested in Australia where it is already in use.

The deck is bolted to the back of the combine and designed primarily for CTF systems. It works by catching the chaff and left-over blackgrass seed before it hits the spreader, placing it on to the enclosed conveyor belts that distribute it behind the combine’s rear wheels.

“We know there is still some blackgrass seed around at harvest and I was intrigued to find out if we could make use of our controlled traffic lanes to provide some control”, says Jeremy Durrant, farm manager at EW Davies Farms in Essex, where the trial will take place.

These tracks are usually heavily compacted and therefore the blackgrass seedlings will struggle to get going.

The kit connects to the combine’s hydraulic circuit, but power demand is low so it is not thought to have had any effect on harvesting performance during the Aussie trials with John Deere, Case and New Holland machines.

The UK trial is being organised by AHDB, Frontier Agriculture and Primary Sales Australia who manufacture the deck, which is on its way to the UK in a container ship. On arrival at the Essex farm it will be fitted to Mr Durrant’s Claas Lexion 780 combine.