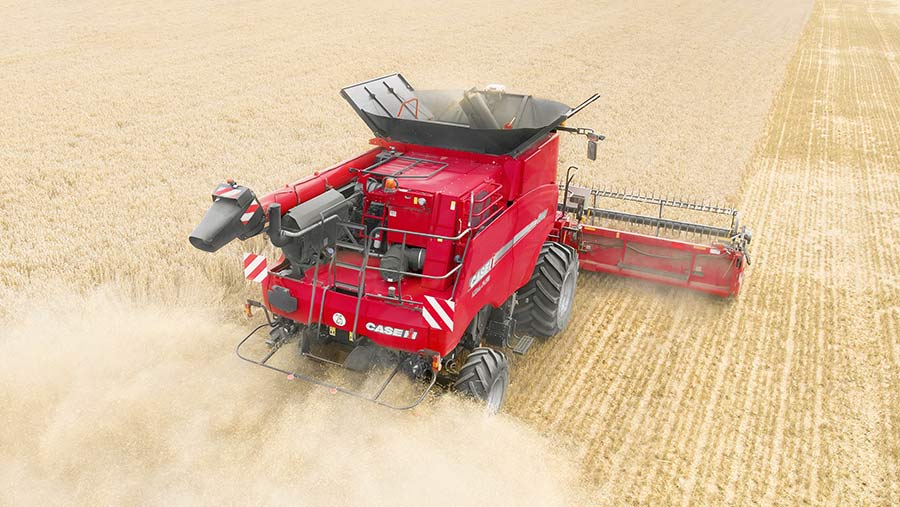 With this year’s combining season well and truly put to bed, it’s time for some growers to look ahead and consider their combine requirements for harvest 2020. We detail the updates and new models.

Smaller models in the Case-IH Axial-Flow range become the 150-series for 2020 to reflect an engine upgrade that meets the latest emissions regulations and delivers a modest power increase to 453hp for the 7150 X-Flow at the top of this range.

There is also a cutting table upgrade for this model, up from 7.62m to 8.5m as standard, so that a consistent 8m cut can be taken in an 8m/24m controlled traffic approach to field operations.

In addition to a modest power hike for the Avero 240, thanks to a Perkins to FTP engine swap, Claas has introduced a new generation of Lexion rotary separation combines with the promise of about 10% productivity gains over current models. 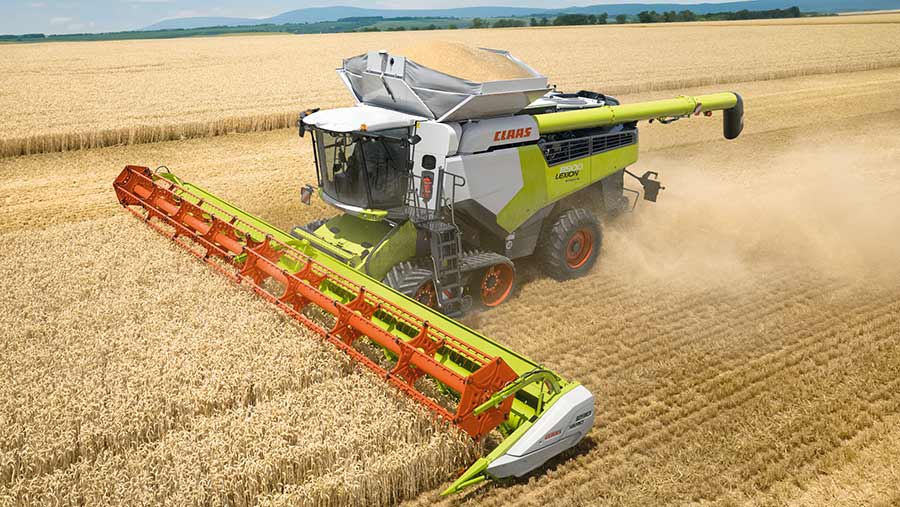 This mainly comes from a 26% larger-diameter threshing cylinder with 10 rather than eight rasp bars and a larger-diameter feed drum behind it, that encourages the crop to divide into two streams as it enters the separation rotors.

The pre-rotor separation concave area has increased considerably as a consequence of the larger cylinder and feed drum diameters – in fact, the narrow-body models now have as much concave area as the top model in the previous range – and crop flow through this assembly is less tortuous.

Once extracted and cleaned, grain ends up in a tank redesigned for easier access and enlarged from 13,500 litres to 15,000 or 18,000 litres for the top models, with an increase in unloading auger capacity to maintain tank emptying times.

There are new technologies, too, including a pressure cell weighing system in place of the volumetric Quantimeter set-up, while Field Scanner laser-based autosteering uses cab- rather than header-mounted laser scanning to guide the combine along left- and right-hand edges of standing crop, as well as tramlines when opening up in a controlled traffic farming system.

Engine power is increased in most cases, with the range-topping Lexion 8900 Terra Trac boasting 790hp from its MAN engine.

A new entry-level model – the C5305 Farm-Line – has joined the Deutz-Fahr range to cater for smaller growers wanting to run a new combine. 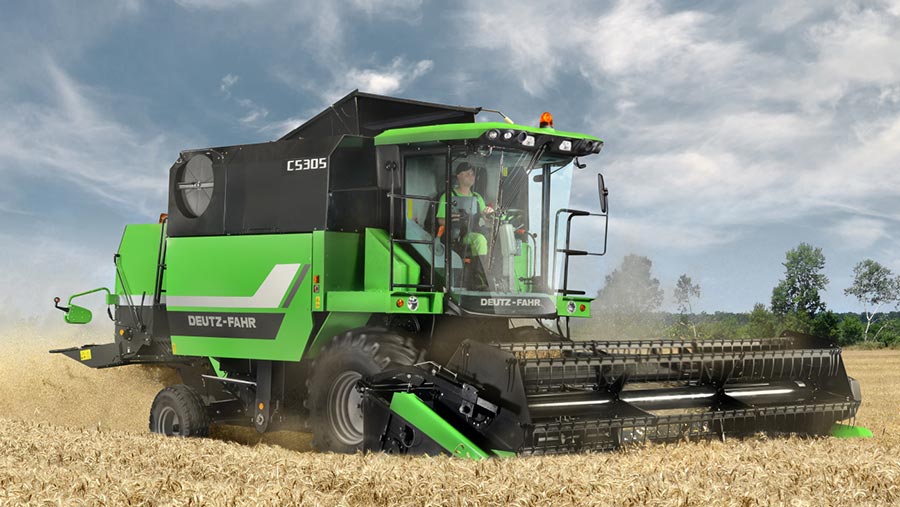 At the same time, performance of the mid-range C7206 TS models have been given a performance boost with a 41hp or 12% increase in power output from a new “Extra Power” Deutz diesel option.

The same engine and its 381hp output is also introduced in the range-topping C9306 TS. This results in an 18hp or 5% hike for harvesting, but a 14hp reduction in the peak output available on earlier models when “boost” power is engaged for emptying on the move.

There are no changes to the line-up for harvest 2020 as the Fendt team takes stock of the first Ideal combines operated by farms this year.

But there should be opportunities to assess the planned Ideal 10 being added to the range for the following year, with its 790hp engine and novel joystick steering.

There are no changes to the model line-up, but John Deere has enhanced some of the technologies on its S700-series rotary threshing/separation combines.

For example, HarvestSmart – which automatically regulates forward speed in relation to combine loading – is now integrated with Interactive Combine Adjustment (ICA2) to also adjust speed if a target grain sample or loss rate cannot be achieved. 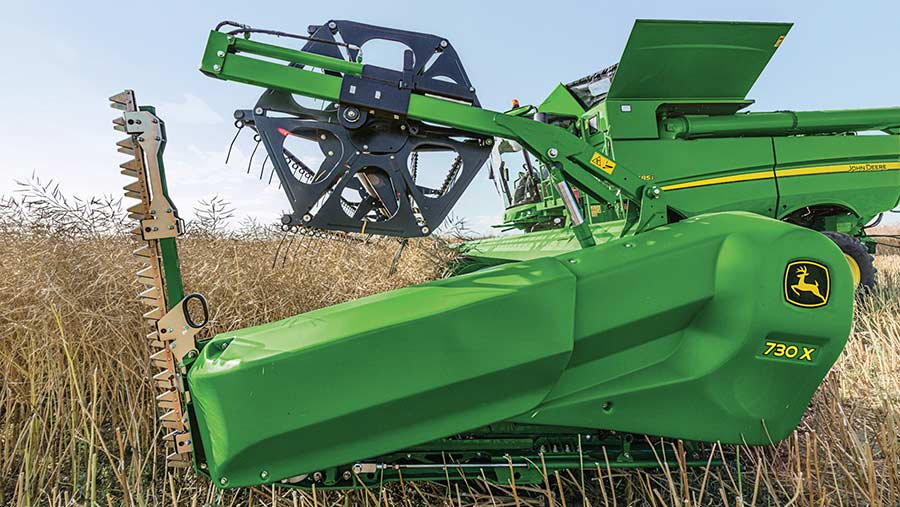 Automatic mirroring of straw distribution when this has been offset by the operator to compensate for a crosswind is a new feature that uses GPS to detect when the combine reverses direction, and remote adjustment of the chopper’s counter-knife is designed to make it easier to achieve consistent chopping performance.

John Deere’s 700X-series cutting table with 800mm of hydraulic fore-aft adjustment of the cutterbar has a lower profile than the current design, for smoother transition to the auger, especially with short crops such as winter barley, and the 4.5m-wide 615P pick-up reel table has been introduced for gathering swathed oilseed rape, legumes and so on.

The current MF range, encapsulating the 7300 Activa and Beta models and the three-model Ideal series, continues into 2020 for now, but a more powerful, higher-capacity version of the Ideal is on the cards.

Power hikes and some detail changes contribute to increased productivity, which characterises changes to the New Holland combine range.

All four benefit from an increase in the working speed of the beater that accelerates crop into the two 560mm-diameter rotors, resulting in a claimed 5% increase on capacity potential.

A novel threshing drum with short, offset (rather than full-width) rasp bars is introduced as an option for New Holland CX7 and CX8 walker separation combines.

It has the same 750mm diameter as the standard unit, but is heavier and said to consume 16% less power while increasing combine capacity by up to 10% and virtually eliminates the “thrum” of a conventional threshing cylinder.

Increased in-cab control includes remote adjustment of the pre- and main sieves, rotary separator concave and easier positioning of the unloading auger using a control now on the CommandGrip.

Changing between chopping and swathing is also an in-cab operation now, along with adjusting the speed of the new twin-disc chaff spreader.