After something of a stop-start harvest that for numerous growers involved cutting crops new to their rotation, manufacturers and dealers are looking to sign up customers for combines delivering additional performance and technologies next year.

In some cases, buyers will be looking to alternative header designs from combine makers and independent manufacturers to gain throughput, minimise shedding losses and gather laid or low-growing crops.

There are no changes to the Axial-Flow line-up or technical specifications this year following the earlier introduction of AFS Harvest Command automation.

This adjusts speed of the single threshing and separation rotor and also the angle of vanes on the rotor cage that influence the rate of crop flow through the system, with the aim of protecting grain quality and minimising losses.

The system also tweaks cleaning fan speed and sieve opening to compensate when the combine is cutting up and down hills.

The biggest change in this year’s Ultimate Guide is the introduction of the new Trion range of Cummins-powered combines, which replace all Tucano models (with the exception of the Tucano 320 for a year), plus the loss of the four-walker Avero 240.

Trion combines use the wider and larger-diameter APS pre-separation and threshing assembly from previous-generation Claas Lexion combines to give a performance boost. 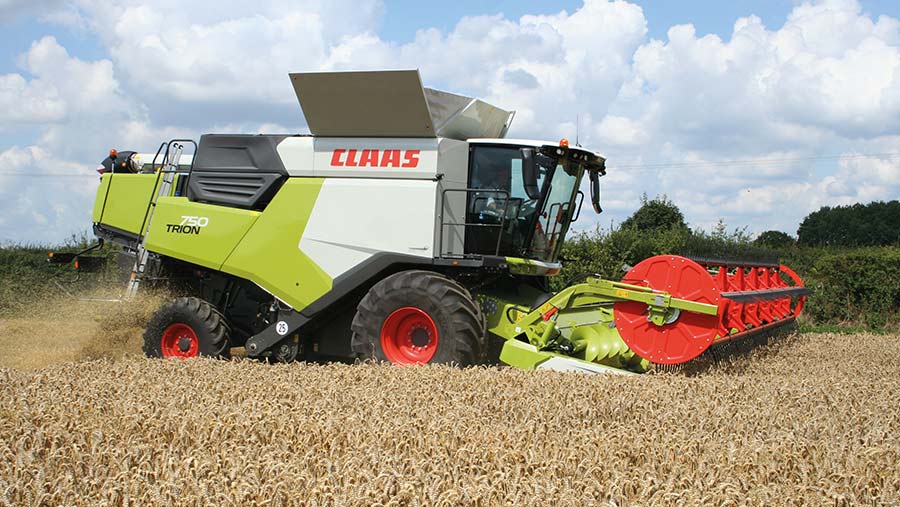 There is a choice of five or six straw walkers with overhead agitator drums, and one or two separation rotors, depending on the seasonal output needed.

Montana chassis levelling and Terra-Trac tracked running gear options are available throughout and there is greater scope to add features and technologies for a machine specced to base Tucano or top-end Lexion levels.

A revamped cab providing increased headroom, taller glass and slimmer pillars are also part of the package built around a new chassis, while the switch to Cummins power and some driveline changes are said to improve efficiency and fuel economy.

The Lexion line-up, meanwhile, continues unchanged following the introduction of the 5000/6000 straw walker and 7000/8000 rotor separation machines in previous years.

SDF has rationalised the Deutz-Fahr combine range to better reflect UK market demand, which results in the entry-level five-walker C5305 Farm-Line being dropped, along with the base-spec C7205 Farm-Line, the more powerful 320/340hp C7206 Top-Line, and the 381hp Extra Power versions of that model.

Likewise, the 354hp C9305 five-walker model and its self-levelling Balance variant have been culled.

That leaves a selection of five-walker combines available with and without the Turbo-Separator peg drum that initiates grain separation ahead of the walkers and can be raised out of the crop stream when straw is very dry and brittle.

And at the top of the range, the six-walker C9306 TS continues unchanged.

There are no changes to the Fendt line-up this year, with the range-topping Ideal 10 having been in place for the 2021 harvest.

As an alternative to the regular Power Flow table, buyers do have the opportunity this year to add a Geringhoff rigid- or flexible-knife draper header for Ideal models as part of the ordering process.

Likewise, John Deere’s fleet for the 2022 harvest remains the same, with the ultra-high-capacity X9 models introduced for this year’s campaign heading the range.

However, the non-HillMaster S700 rotary threshing and separation combines are priced in this year’s Ultimate Guide with a 700D fixed-knife draper header as the recommended unit rather than the 700X auger header with hydraulic knife position adjustment. 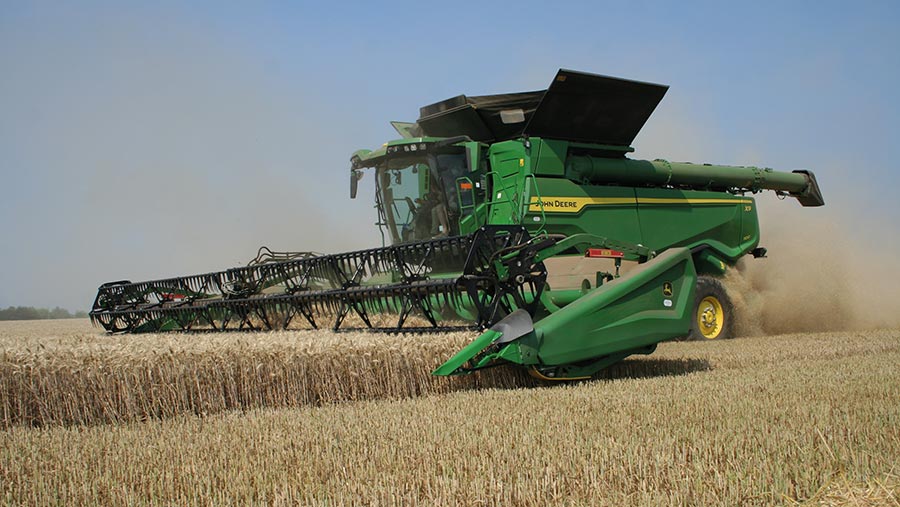 Increased power for Activa walker combines is the sole change for Massey Ferguson this year.

The 7340 range entry model gains 5% output to peak at 185hp, with its more powerful counterpart getting a slightly lesser increase to top out at 226hp, while all 7345 S variants, including those with the MCS drum that begins grain separation ahead of the five walkers, benefit from a 7% increase from 243hp to 260hp.

The same increase enhances performance of the six-walker non-MCS 7347 S, whereas the level land and chassis levelling versions with the extra separation element get a near-11% increase in output at 306hp. 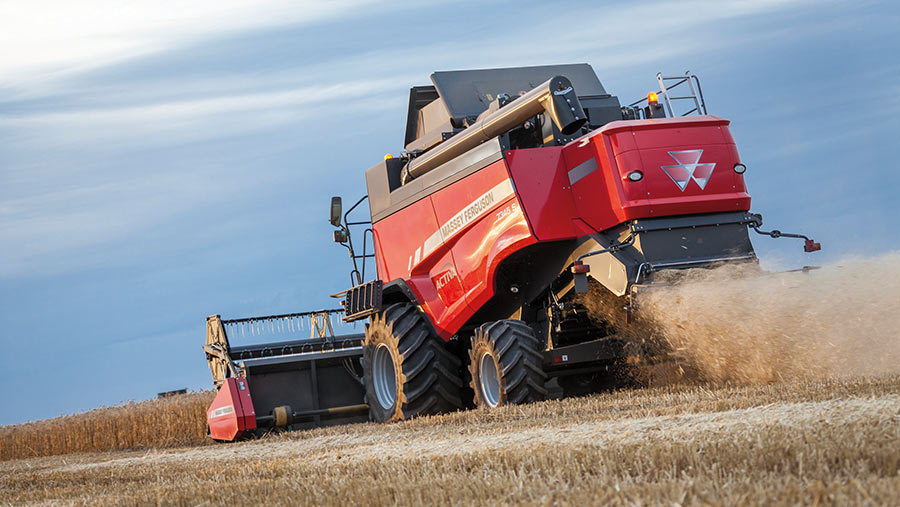 With the introduction of a Laterale self-levelling version of the new CH7.70 combine, New Holland is catering for growers who want the mid-range machine’s performance characteristics, but have slopes and gulleys on their land.

The CH7.70 is New Holland’s first “crossover” combine; it matches a conventional threshing set-up with twin rotor separation, in contrast to the walker separation models and the CR machines that have rotor threshing and separation. 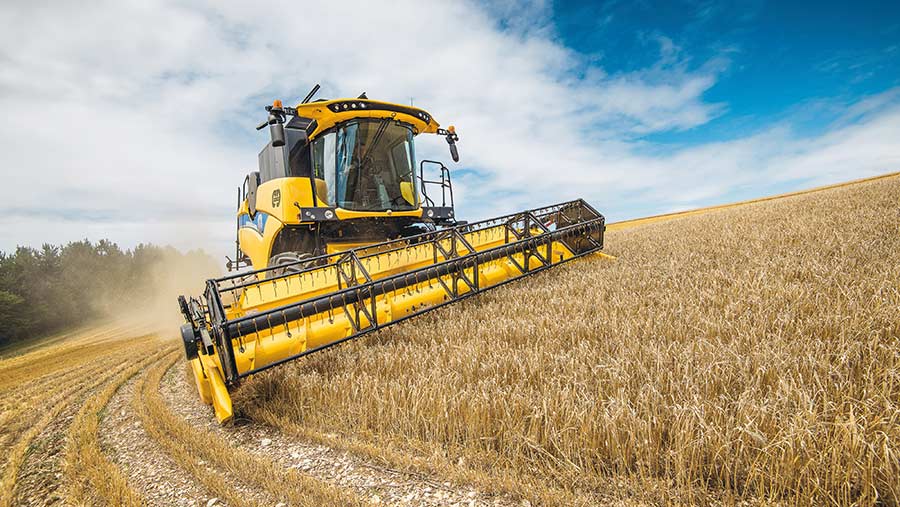 Laterale keeps the combine level across slopes up to 18%, with anything steeper compensated for by the Smart Sieve system that introduces variable sideways movement into the sieves’ reciprocating action.

These systems complement the Triple-Clean cascaded cleaning system and Opti-Fan variable air delivery in compensating when working up and down slopes.