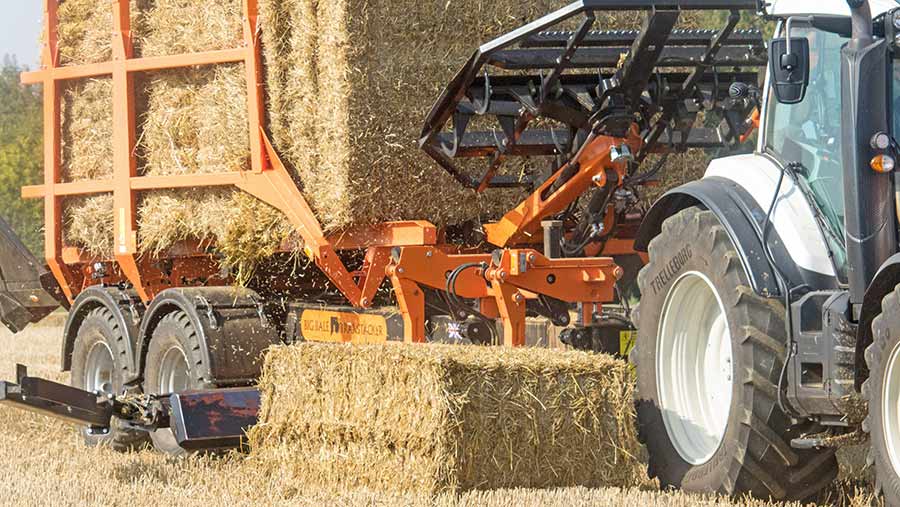 The very thought of loaders and artic flatbed trailers running over a field collecting bales is enough to send shudders down the spine of any controlled traffic farming (CTF) convert.

To avoid this counterintuitive process when using CTF to reduce soil compaction, Nottinghamshire outfit Flawborough Farms has been running a Big Bale South Transtacker for the past two seasons.

The 2,000ha arable unit is managing some of the heaviest land in the UK, with its Denchworth and Fladbury series clays having a very high clay content and the latter inherently high in magnesium.

This means good ploughing is almost impossible, and working with subsoilers and large tillage trains to correct compaction or produce a seed-bed is eye-wateringly expensive.

To cut cultivation costs and improve its soils by minimising compaction, the business switched to a CTF system in 2012, designating almost all operations into 12m lanes with RTK guidance.

Tom Hawthorne, who runs the business alongside his parents and sister, says this allowed the farm to get away from the “deep” cultivation mindset of the past and either direct drill or use just a shallow pass with a 12m Horsch Cruiser XL for seed-bed prep.

A 12m Horsch Sprinter with Dutch openers drills seed and all fertiliser is applied in liquid form with a 36m sprayer.

A Claas 780 with a 12m Macdon Flex floating draper front and an Annaberger chaser bin are employed at harvest to complete the CTF-friendly kit lineup.

All this has helped improve soil structure, but when an opportunity came along to sell straw to Brigg and Sleaford power stations, starting in summer 2018, Mr Hawthorne was left with the quandary of how to do so without undoing the farm’s progress.

Bale chasers have long been touted as the solution to reducing traffic when clearing bales, negating the need for multiple loaders and trailers by picking up, stacking and unloading off the field with just one man and tractor.

There are three main bale chasers on the market, including Notts-based Arcusin’s Autostack concept, and Heath and Sons’ Super Chaser.

The former can pick up bales from CTF lanes but doesn’t allow the operator to turn bales 90deg to tie each stack for stability and, therefore, doesn’t allow for stacks to be picked back up and moved elsewhere.

The Super Chaser is unsuitable for CTF, as the machine has its pick-up at the front and runs offset from the tractor wheelings. 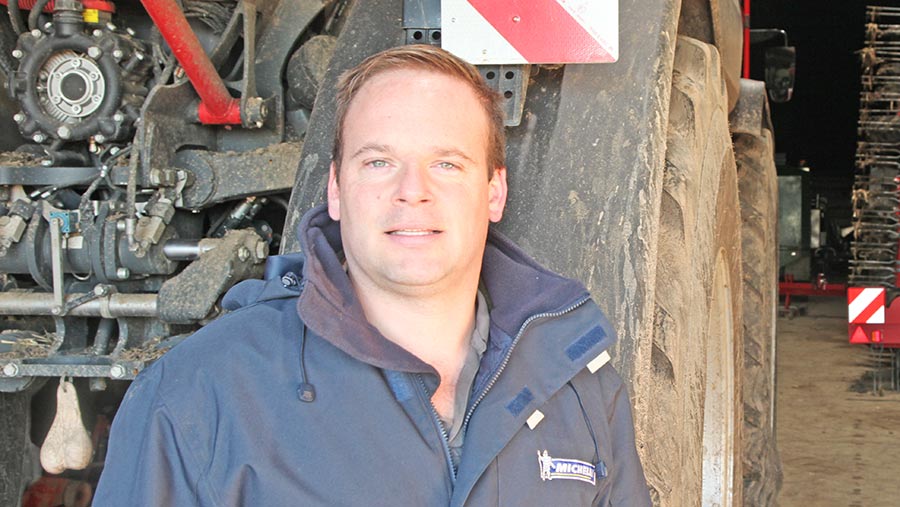 Mr Hawthorne wanted all three elements in one machine and discovered that Big Bale South, which produces the Transtacker 4100 bale chaser, was adapting its machine to work in CTF and had the ability to tie and restack, plus adjust to different bale sizes.

“We approached them to see if a machine was available. After some negotiation we came to a deal and had a prototype machine delivered to our farm on hire,” he says.

The previous incarnation of the Transtacker 4100 had just a single piece of box section that folded out at a 90deg angle to the rear of the pick-up mechanism.

This was nudged into the bale by the operator before the loading sequence was engaged, but took the tractor and trailer off the confines of the CTF lane.

However, the new Transtacker 4100 has a hydraulic folding front-linkage-mounted bump bar, which sits at a 66deg angle to the machine’s direction of travel.

The bump bar is hydraulically accumulated to dampen the impact of tractor and bale and allows the operator to work at speeds up to 12kph without feeling significant impact.

This nudges the bale out to the right of the tractor and into the path of a new mechanism that comprises of the same box section at 90deg, but with an additional hydraulically accumulated bump paddle and grab arm.

When the bale hits the bump paddle, the grab arm is automatically engaged, pulling the bale square and offering it to the pick-up mechanism.

It is then spiked and lifted on to a turntable for loading on to the trailer bed, once paired with a second bale.

The turntable can be programmed to automatically spin the pair of bales 90deg in each load, adding stability to the bale stack.

This function is typically used in the first load of a larger stack to avoid the rick falling over when depositing subsequent loads.

The addition of the grab arm to the loading mechanism means that even if the bale isn’t square, it can still be collected in one motion and has opened the door to true CTF bale chasing.

Watch the video (courtesy of Tom Hawthorne) of the machine in action and continue reading the review below.

As the first machine that arrived on farm in 2018 was a prototype, it had a number of teething problems in its first year.

For such a high level of automation, triggered when the bale hits the bump paddle, the 4100 is very complex and uses 13 pressure sensors, 13 proxy sensors that switch functions on and off, plus three rotary magnet sensors during the process.

The combination of sensors on the prototype could often become confused during the loading process, or fail altogether, leading to a frustrating stop-start process.

Fabrication was also an issue, with some of the steelwork not tough enough to handle high throughput of the 15,000 4x3ft six-string bales produced at Flawborough in 2018. 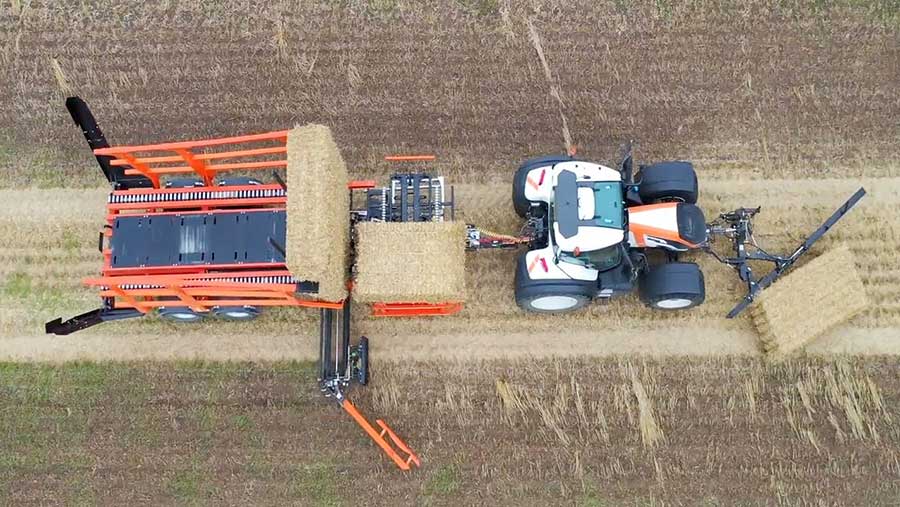 Each weighed about 580kg and breakages to parts of the prototype occurred throughout the season.

The first machine was replaced by one of the latest production models for harvest 2019 and had been significantly improved by Big Bale South, with much of the steelwork beefed up.

However, niggling electronic issues remained while shifting the 12,000 bales pumped out over the season.

“I will give the Transtacker one more year to address the reliability issues, as it just frustrates everyone involved and holds up the whole process [of clearing fields].

“One thing I can’t fault is the support from Big Bale South though, its backup has been excellent,” says Mr Hawthorne.

He adds that when the Transtacker is working well, the driver – who enjoys operating the machine – has been able to touch almost 1,000 bales per day and hopes all the issues are ironed out so they can continue the contract hire agreement in the future.

“We are looking for that sewing machine effect, where the machine purrs all day long and doesn’t stop. It is the only bale chaser that does all the things I want it to do.”