When faced with the quandary of upgrading to a newer combine harvester or a more efficient grain dryer, it takes a bit of discipline to plump for the latter.

But when the time came to replace his 22-year-old New Holland TX63 or 18t Pedrotti mobile dryer, Dorset grower Marc Frampton concluded that slicker grain handling – although far less exciting – would have the biggest impact on his productivity.

See also: How to renovate a Master batch grain dryer

The reason is that Mr Frampton cuts his 160ha of arable cropping himself and relies on part-time labour to haul trailers back to the store. His two helpers have other commitments, so he occasionally has to park a couple of trailers in the field and start cutting solo. 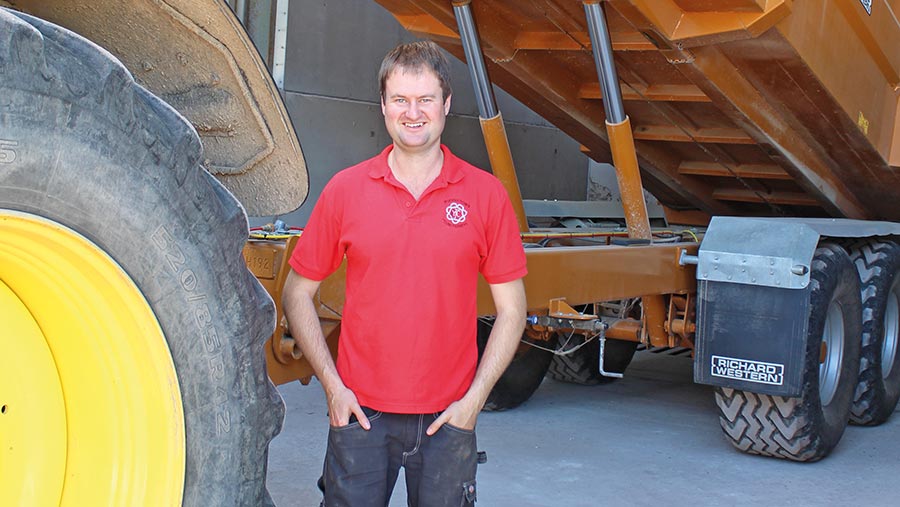 When he was running a standalone 18t mobile dryer, it often meant that wet grain would pile up and he didn’t have enough storage to separate batches at different moisture contents.

Trading the New Holland in for a higher-output harvester would have given him greater flexibility to cut the crop when it was dry, but it would put more pressure on his part-time haulage team, as well as increasing the rate of damp grain coming in during a wet season.

“A new combine would be nice, but I had a good think about it and realised that I was actually pretty happy with the performance of the TX,” says Mr Frampton. “Output is fine for us; it’s fairly reliable and cheap to run, plus I’m barely losing anything in depreciation.”

In comparison, a dryer with some form of automation would allow him to keep cutting and not have to worry about tackling large heaps of wet grain on days that the combine was parked up.

Plus, if he picked the right system, the investment would see him through most of his farming career and provide extra capacity to take on more land if the opportunity arose.

Having had a good experience with his 18t Pedrotti electric dryer and its 12t pto-driven predecessor, Mr Frampton decided to stick with the brand and importer Master Farm Services.

The only other option he considered was an Alvan Blanch continuous flow machine, but the surrounding infrastructure was a little more involved and he felt a mobile batch dryer would be easier to sell and upgrade in the future.

After a site visit from Master Farm Services’ George Young, the pair decided to modify the existing shed, sinking the dryer into a 1m deep pit and building a floor-level grate with hopper to channel grain into the intake. 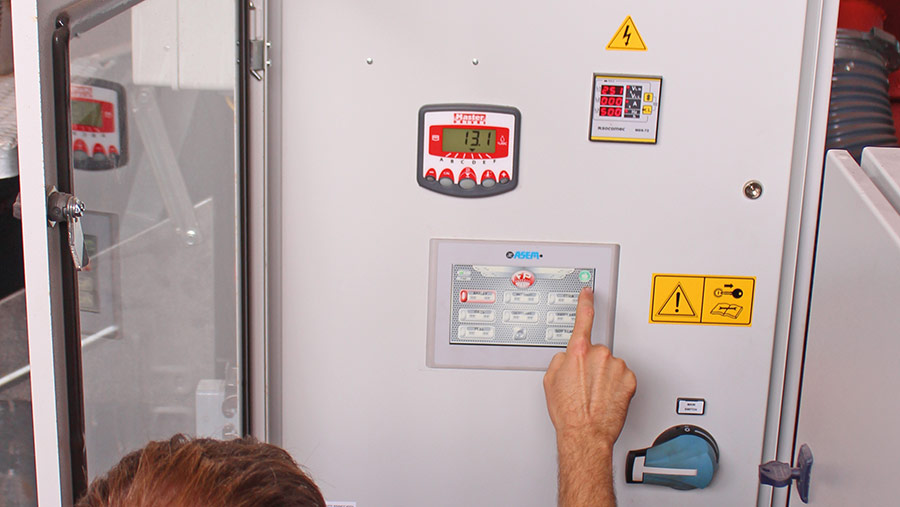 This meant there was ample height for the 30t machine, and trailers could tip quickly over the grate without needing to use a chute. To further increase capacity, Master specced a double-length intake auger and suggested installing grain walling between this auger and dryer.

This allows multiple trailer loads to be tipped in the bay, and grain can be periodically pushed up with the telehandler to make sure the dryer has a constant supply. This filling setup required more groundwork than a shallow trench auger, but was cheaper overall and offered ample loading speed for the size of dryer. 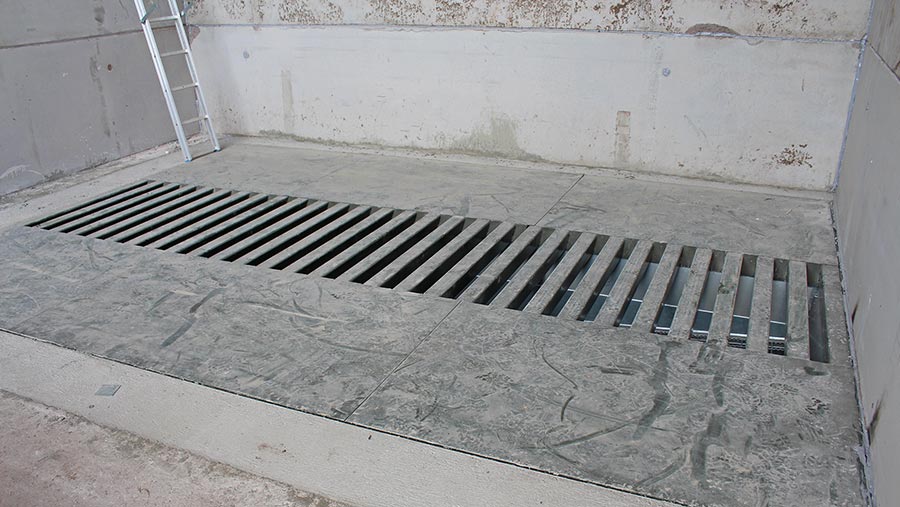 To remove the need for regular kerosene top-ups, the machine was plumbed directly into a 5,000-litre bunded tank positioned behind the shed.

When it comes to unloading, the dryer’s gravity unloading chute drops grain into a Perry incline elevator and conveyor system that takes it to one of three locations – a large store split down the centre with concrete grain walling, and another smaller shed at the rear. 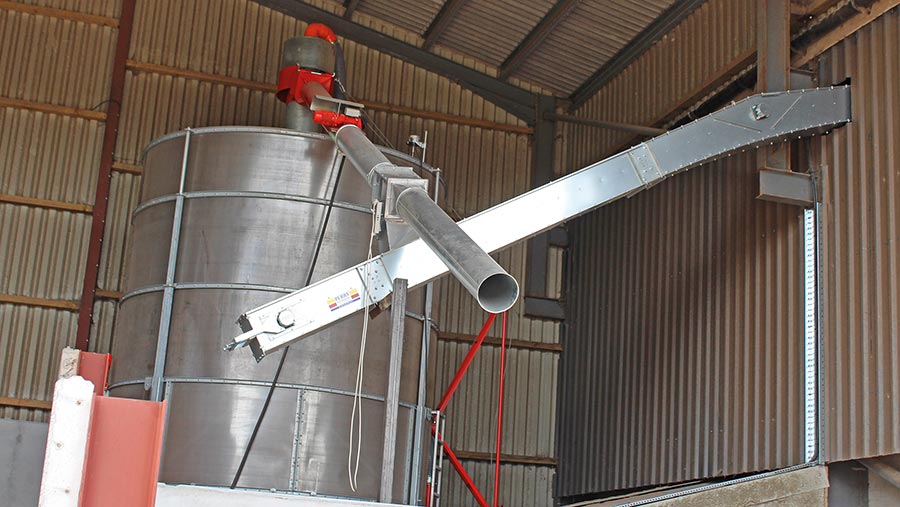 As the grain leaves the dryer, the elevator takes it up to a conveyor belt that runs down the centre of these buildings and a remote-controlled tripper and chute arrangement diverts it to the desired location. 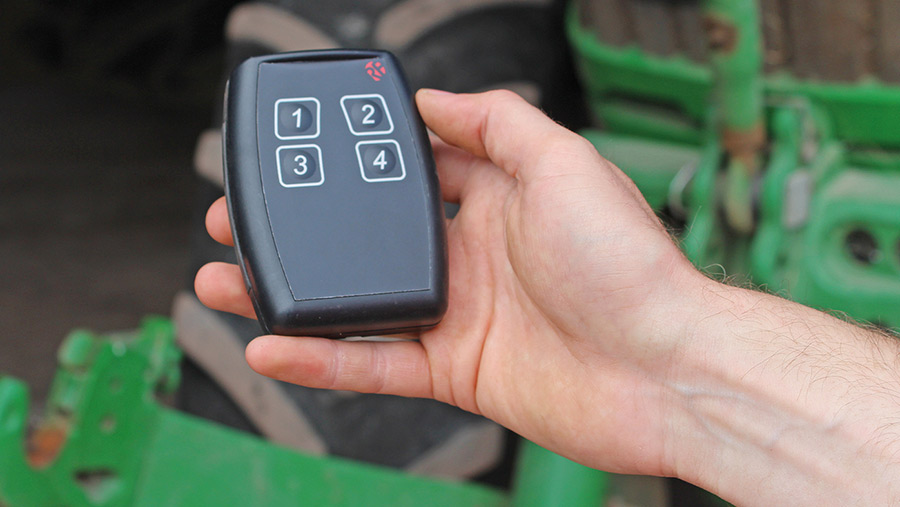 As the bays fill, this tripper can be shunted along the conveyor to make sure the store fills evenly and requires minimal shovelling. This function has the option of being automated in the future, by adding a sensor that automatically moves the tripper as the bays fill. 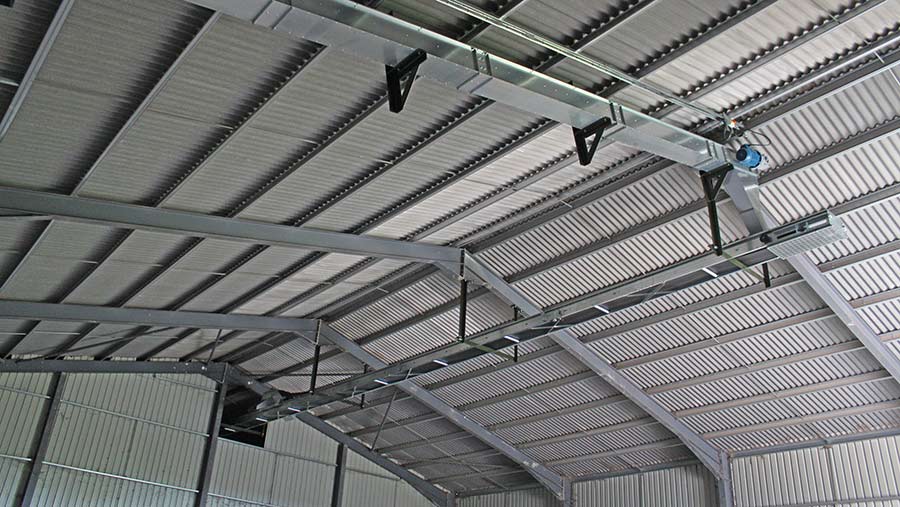 All components in the transportation system are rated to 80t/hr – the same as the dryer’s central auger – so a 30t load can empty in 20 minutes, maximising the number of batches that can be processed in a day.

A separate bay at the front of the dryer also gives the option of discharging dried grain directly into a trailer.

The machine at the heart of the setup is a 30t electric-drive batch dryer, which is the largest of Pedrotti’s mid-sized machines.

This can be set to process an unlimited number of batches automatically, so as long as the filling pit is kept topped up and there’s space in the store, it will fill, dry and empty by itself. A complete cycle time for wheat at 18% moisture is about two hours, so it can comfortably work its way through more than 200t in a day. 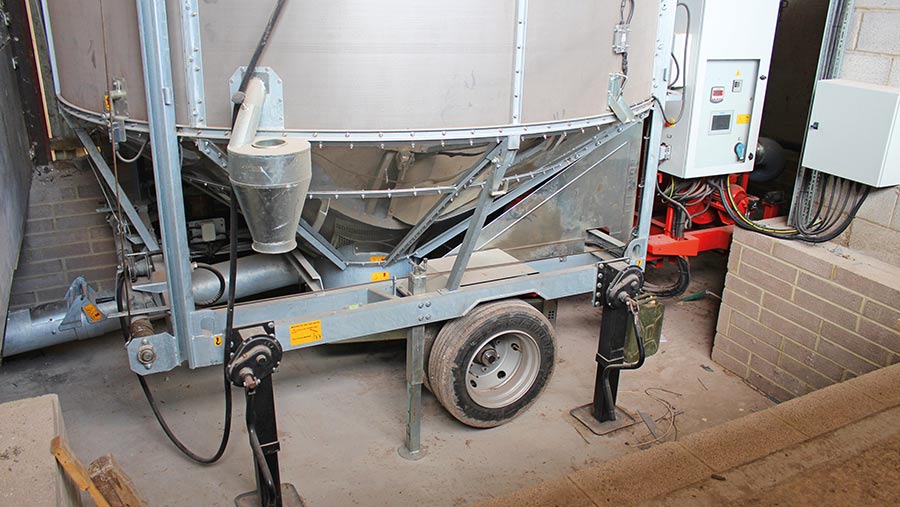 In its standard format, the auto function will get the grain to a pre-set temperature before the burner kicks out and the cooling cycle begins. Pre-sets are available for each crop type, but some trial and error can be required to get the ideal temperature and cooling period for the first load.

To give a second point of reference, Mr Frampton’s dryer has also been specced with a moisture meter which, once calibrated, allows the load to be dried to a specific moisture content. Grain tends to dry by 0.5 to 1% during the cooling cycle, so the target moisture can be set slightly higher than he wants it to be in the heap.

Another handy feature is the machine’s wifi connection, which allows the dashboard to be viewed on a tablet, smartphone or laptop. This means Mr Frampton can keep an eye on its progress from the combine seat and adjust the settings. All functions can be controlled in this way, apart from the initial start-up.

This is a standard feature on automatic dryers and only requires a mobile sim card to allow it to communicate with the Master website. Using a unique code and password, the operator can then log on from any location.

No separate grain cleaning facility is included in Mr Frampton’s setup, but the dryer does have a top-level dust extractor and a gravity cleaner. This has a cyclone and fan that blows the waste to the same location as the dust extractor behind the building. 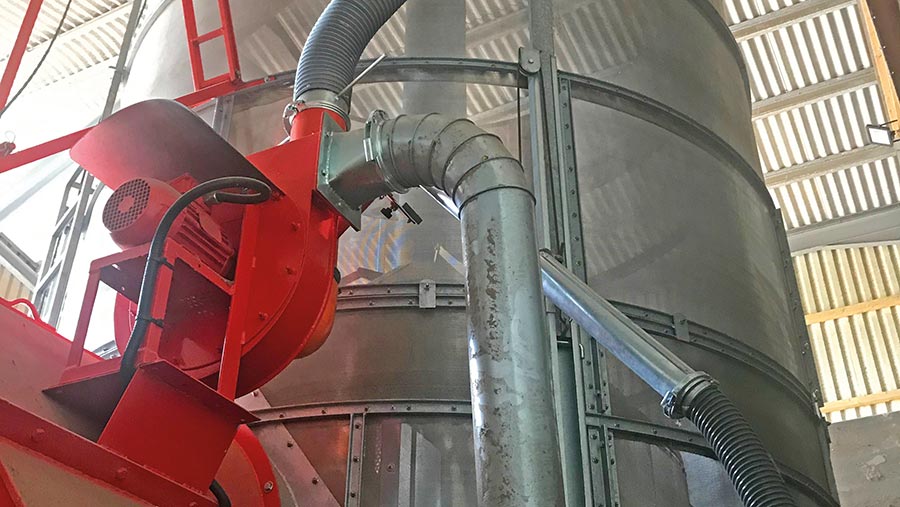 As the dryer sits in a pit, there’s also an integrated Mastervac vacuum that allows debris to be quickly cleaned up around the base of the machine.

To simplify washing out, the base of the dryer pit has been sloped to a drain, which runs into a soakaway behind the building. This means there’s no need to worry about bailing out dirty water.

The incline conveyor added another £20,000 and the rest was spent on steel fabrication, groundworks, concrete and wiring.

A three-phase electrical connection had been installed for the previous dryer – at a cost of about £20,000 – so the electrical work was a relatively small part of the investment this time. 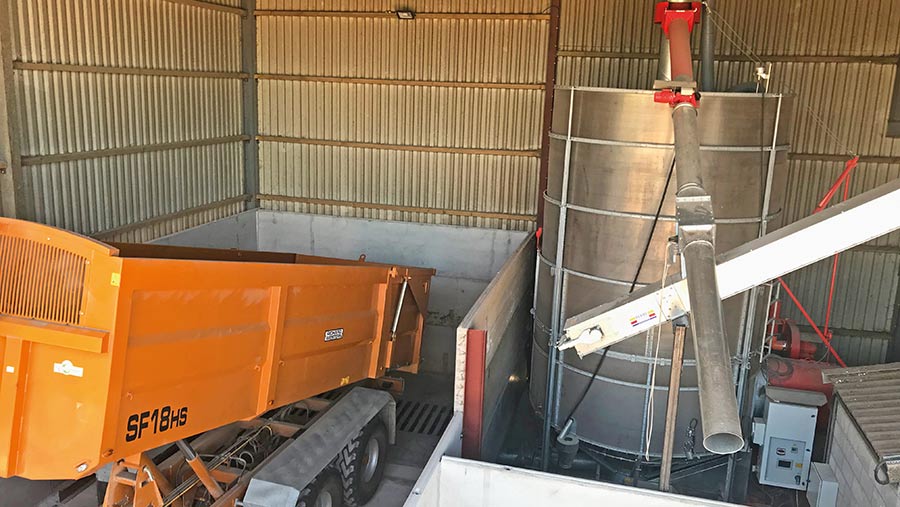 “It does seem like a lot of money for a farm of this size to invest in a dryer, but it will last me a lot longer than a new tractor or combine,” says Mr Frampton.

“I’ve only had one year in my farming career where I haven’t needed to dry anything, so it should make a big difference to productivity and make life a lot easier.”