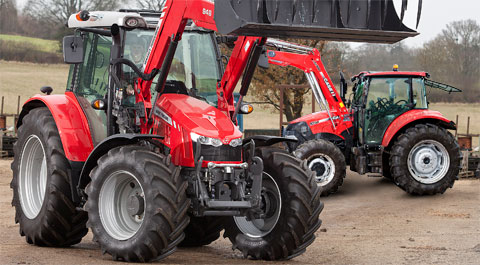 From an operator’s point of view, both the Massey Ferguson 5610 and Case IH 105U have moved on quite a bit from their predecessors, but in very different ways. Loaded with labour-saving gadgets and gizmos, the MF has big tractor perks coming out of its ears and has much more transmission sophistication.

Meanwhile, the Case has a completely new cab and gains a few extras that might be considered standard with other brands, such as electronic linkage control and the ability to control shuttle aggressiveness.

It’s more of a straightforward stockman machine and costs some £10,000 less than the Massey. Whichever one you choose, you’ll get a somewhat plusher machine than you would have done a year ago.

Cleaning up tractor exhausts has been a massively expensive operation for tractor makers. So much so that progress in other areas of tractor development has almost slowed to walking pace.

Farmers and contractors now have to pay through the nose for the technology that cleans up their exhaust, but it’s sometimes hard to see what they get in return.

To find out what has changed from an operator’s point of view, we put the latest Massey Ferguson 5610 and Case IH Farmall 105U toe-to-toe with their predecessors. 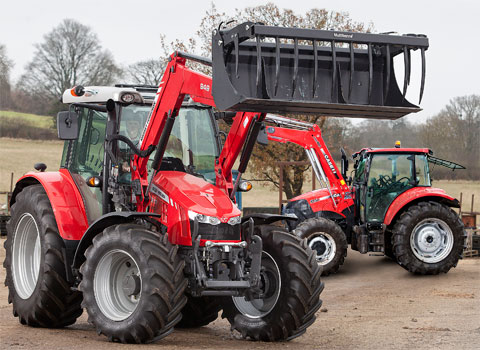 The most radical transformation in the MF 5610 has occurred in the drivetrain department. Gone is the four-pot Perkins powerplant that has been synonymous with the MF triple-triangle for the best part of five decades.

In its place is a three-cylinder motor from MF’s Finnish engine-making arm Agco Sisu. With 1.1 litres less cubic capacity and one fewer cylinder, there will undoubtedly be a few raised eyebrows among Massey stalwarts.

But the company says the move away from an old-school mechanically governed fuel pump to common-rail electronic injection means more power and low-end load-lugging ability can be squeezed from a smaller block.

And, if you believe the brochure figures, that’s borne out on paper. There’s 3% more torque on offer and it now peaks 200rpm higher up the power curve at 1,600rpm.

Using it for loader work and trailer tugging duties, it was difficult to tell the difference, aside from the three-pot’s louder clatter at idle.

It’s a similar story in the Case camp, too, although the overhaul hasn’t been quite as drastic. They’ve stuck with a four-cylinder engine from Fiat PowerTrain Technologies (FPT).

Like the MF’s, cubic capacity has been cut back significantly (from 4.5 litres to 3.4 litres) and farm-fixable fuel pumps have been replaced by computer-controlled common-rail systems.

Once again – according to the spec sheet – that means torque is up by 4.5% and max power arrives 200rpm higher up the rev range.

So what has changed in emissions terms? The short answer is that MF has opted for an exhaust catalyst (DOC) and exhaust gas recirculation (EGR) that sees a fraction (less than 10%) of gases pumped back into the block to limit nitrous oxide formation.

Likewise, the Case’s FPT motor goes for a bit of EGR, a catalyst and a particulate filter (DPF) at the base of the stack.

On the gearbox front, it’s again the Massey that has seen the biggest changes. With four powershift steps and then four pushbutton-powered range changes, it’s still a 16Fx16R box, but now it can be set to full auto.

In hare-mode that means it’ll push right up through every ratio, while hitting the tortoise button limits it to just the four shifts within each range.

Orange SV1 and SV2 scroll-wheels are used to set the auto shift rpm and limit the top gear, but poor labelling means it’ll involve guesswork for the uninitiated. They also double-up to alter the engine speed presets, selected by a button illogically marked with a gear symbol.

What could prove really useful for loader work and jobs such as round baling is the brake-to-neutral function. When this is switched on, it means that as soon as you stamp on the brake pedals drive to the wheels is interrupted. However, when you lift off again, it has a tendency to re-engage with a bit of a jolt.

With the Case it’s business as usual on the transmission front. It’s a three-range box with four manual gear shifts and a clutchless shuttle and splitter – all good straightforward stuff. What is new is the ability to alter the degree of shuttle aggressiveness on a simple three-way rocker-switch.

Pto gearing has been altered so that 540rpm is now achieved at 1,930rpm compared with 2,200rpm before. That should save a bit on the Farmall’s bar bill…

At 65 litres/min, the Case IH gets a couple of extra litres of flow compared with its predecessor. If you want it as a loader tractor, though, we’d advise upgrading to the 85-litre/min pump.

As before, the Massey has a switch in the cab that couples two pumps together to produce 100 litres/min, but now all that oil is available for both loader and linkage, should you choose to use them simultaneously.

The standard linkage controls on the previous Case JXU were arm-draulic mechanical levers, plus Fiat’s trademark quick-drop thumb catch. That’s now off the menu, with electronic buttons being the order of the day.

Although MF has always had electronic controls, they’ve moved away from a nice, simple three-way rocker switch to much-less-positive-feeling push buttons.

And the pick-up hitch is no longer integrated into the linkage, either. Massey has opted to go for Dromone’s new roller-chain hitch which, instead of having drop-rods connected to the link arms, uses a spool-valve to raise and lower the hook on a pair of Triplex chains. It’s fine, but doesn’t match the visibility of a proper push-back hitch.

The Case, meanwhile, gets CNH’s standard drop-down hitch, unless you order a Dromone telescopic unit. For an extra £1,126, we’d definitely recommend it.

On the loader front, both brands rebadge bought-in units in their own particular shade of red. For MF it’s a Quicke, while Case uses a Stoll.

What’s clever about the latter is the fact that the self-levelling linkage no longer sits on top of the main boom rails but instead runs through the middle of each beam. It’s a very neat and tidy arrangement.

Armchair-style comfort and usability is the order of the day in the cab and both manufacturers seem to have raided the piggybank to make a few changes in this department.

For Massey, that means stealing the curvy-framed six-poster and beige trim from the bigger models. The result is acres of glass and enough space to comfortably fit your mother-in-law, dog and lunchbox. At the back is Massey’s standard narrow rear window and curved three-quarters glass.

Views forward over the droopy snout are good, but opt for a roof window if you want a decent view of the loader. The options list is jam-packed with ceiling choices – depending on the height of your sheds and your preference for sunshine you can pick from a roof-window, slimline, hatched or standard lid.

The Case cabin has been transformed, too. The JXU’s boxy frame that dated back to mid-1990s Fords has made way for curved windows and smoother contours, but the penalty for this is a smaller cab footprint.

Like the Massey, the Farmall has a slim rear window with uprights running either side, so you have to bob and weave to get a good view of the mower or plough. Also, the vents are crowded together on the centre console and none are near enough to the windows.

For a tractor that is likely to do plenty of front-end lifting, the new roof hatch is a must-have. It means you get a good look at the bucket all the way up the lift arc, with a stick-thin beam the only interruption at the top of the windscreen. The view down over the nose isn’t as good as the Massey’s.

The MF 5610’s close resemblance to the big boys carries on in the cab, where drivers will need good skills in button-pushing to make use of all the settings.

Most of the important stuff is lumped together on the right-hand B-pillar. Pokeable blisterpads are used to pick pto speed, four-wheel drive, diff-locks and combined flow mode (see hydraulics).

Some stuff has stayed the same, though – drop speed and lift height are still on simple twiddleable dials.

There’s a new automatic pto function that can be set to turn on/off according to linkage height, too.

The finer details of the transmission and engine rpm presets can only be tweaked through the tiny, patience-testing dash screen. Other functions are here, too, but shift points, max forward speed and the brake-to-neutral function are unlikely to be things that will be adjusted by every Tom, Dick or Harry that hops on the tractor.

Changes are less extreme in the Case – this is a stockman-friendly tractor, so don’t expect all the bells and whistles. The cabin set-up is almost a carbon copy of the New Holland T5 and the boxy, built-in joystick is standard Stoll stuff and has no transmission controls. The pto gearstick has moved over to the driver’s left-hand side.

The trim has been jazzed up, but it still has a stockman feel to it. Plain flick-switches and levers are used instead of blister buttons and there are three settings for shuttle aggressiveness.

Auto on/off four-wheel drive and diffs aren’t supplied and there’s only space for a half-sized radio with an iPod connection and no chance of replacing it for a full sized, CD-playing alternative.