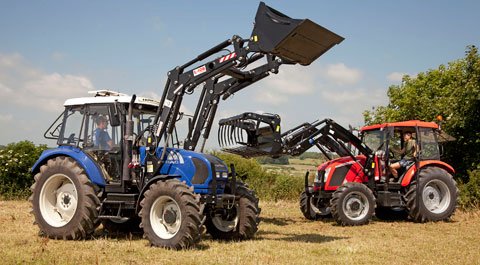 The Zetor Major has returned to the UK after a six-year sabbatical. Nick Fone and Oliver Mark pit the seasoned Czech stalwart against a new name from the Eastern bloc – Farmtra.

Watch the video and read the full test below.

At last count there were just over 20 tractor makers crammed like sardines into the Farmers Weekly tractor buyer’s guide, each vying for a piece of the UK machinery market. So it’s hard to believe that there’s space for another 80hp+ manufacturer.

But still they come – Polish-based firm Farmtrac is one of the latest to join the party, bringing with it some bargain-basement pricing but a well-stocked standard spec list. Its aim is to knock seasoned small-tractor campaigners like Zetor off their relatively comfortable perch.

Stealing sales is tricky business, though. The Czechs have built a reputation for simple, serviceable tractors, even if they’re often a little rougher round the edges than higher priced alternatives.

Just after WWII, Zetor started out building tractors at an ammunition factory in Brno, southern Czech Republic. Since then it has turned out over 1.1m machines.

Over that time the firm has developed a reputation for making basic, no-nonsense machines that will run and run, manufacturing most of the components in-house, including its own engines.

The larger models are made in northern Poland using engines from Perkins, transmissions from Carraro and ZF, hydraulics from MITA and fuel injection systems from Delphi – all established names.

It’s with certain pride that the Zetor marketing machine boasts of building its own engines and gearboxes in-house. And that’s with good reason. It’s a major achievement to get an all-mechanical block through the tough Euro emissions tests, particularly when it’s still pretty much the same design that’s been used for the last thirty years.

While the Farmtrac may not have a decades-long lineage, the Polish company’s marketing men are very keen to shout about the time-proven history of their key component suppliers.

Engines come from Perkins – Peterborough-produced four-pot power-plants – while the transmission is an all mechanical set up from Carraro.

There’s a dash-mounted synchro shuttle which shunts particularly seamlessly from forwards to reverse. Down to the right is a stumpy range lever that is a real ankle cruncher when in medium. Then there’s the standard four-speed main gear stick and another for the synchro-ed hi-lo splitter, making for a total of 24 ratios in either direction.

The Czech version is almost identical in operation, lacking the splitter – it remains a 12 forward/12 reverse box, although the shuttle takes a little more bicep/tricep power to operate.

In terms of mechanical layout, both are very much cut from the same cloth and we’ve got more than a sneaking suspicion that the engineers at Farmtrac have spent plenty of time examining various Zetor features.

Virtually every lever on the Pride of Poland mirrors the Czech old faithful, even down to the fact that independent and ground-speed pto is selected with a stubby arm down behind the seat while you shunt between 540 and 1000 speeds with a chunky yellow-topped wand nestled in amongst the linkage at the back of the tractor.

Livestock tractor cabs are notoriously scruffy – even a tramp would turn his nose up at some – but mod-cons are always a welcome addition if the price is right.

On paper the Farmtrac’s cabin wins by a stretch but picking a favourite is less clear-cut once you’ve spent a bit of time in them.

The Pole, for instance, comes with a complex climate control set-up, while drivers of the Zetor must make do with opening the windows and sweating it out. But the air-con gubbins is boxed in a bulky ceiling package, which restricts the view forwards and upwards and is guaranteed to cause headroom problems for lanky operators.

The clumsy air-con set-up also means there’s no space for a roof window in the Farmtrac, so once you’ve hoisted your bucket past mid-way there’s no telling where it has gone.

The Czechs, on the other hand, have done away with their chunky air-con packaging and slotted a glass window in the front half of the roof instead. Glazing issues continue at the back for the Poles, where short gas struts limit the opening of the rear window.

While mechanically Farmtrac has kept things simple, inexplicably the R&D department seems to have blown its entire budget on a blister-pad computer control that wouldn’t look out of place on a washing machine to handle everything electrical from lights and wipers to climate-control.

Figuring it out is nigh-on impossible. We can see no benefit over old-school dials and switches.

The rest of the cabs are suspiciously similar. Switchgear and shuttles bear more than just a passing resemblance, although the Czech’s finish is slightly more polished.

The Farmtrac is the bigger, heavier, longer machine, which has its obvious advantages if you’re dabbling in fieldwork as well as yard duties. But it also makes it a little more cumbersome around the farm than the Zetor.

The lightweight Czech has a tighter turning circle and, although it’s a bit unstable without any ballast, whack a block on the back links and it should still have more than enough muscle for moving muck.

Both have 50-litres/min hydraulics but, while the Zetor’s felt perky, the Farmtrac’s were bone-achingly slow. It does, however, get three spools (one with float) as standard, making the Zetor’s spindly single stalk look fairly feeble.

The Czech also has less to offer in the rear linkage department with half-a-ton less lift and old-school fixed-ball link arms rather than the now to-be-expected hook-ends. That said, Zetor offers a pretty cheap package to upgrade the links and spools (hook-ends, an extra valve and radial tyres add about ?£250? to the base price).

With a couple of hundred tonnes of muck to shift, we had plenty of opportunity to test out the hydraulic performance of these two Eastern European players in their key role as loader tractors. (Both companies reckon on almost three-quarters of machines this size being sold with a loader jib.)

While that gave us a good chance to gauge the lifting and tear-out muscle each can offer, it wasn’t necessarily the best measure of engine grunt.

Instead we set up a mile and half long hill-climb route and gave each machine three bites at the cherry. Each time they came in within five seconds of each other, remarkable given the Farmtrac weighs in a tonne heavier but is possibly explained by the fact that it has an extra six extra ponies under the hood.

While most modern tractors boast more frills than one of Great Aunt Nora’s petticoats, these two are beautifully straightforward.

It’s the Zetor that takes the title as the most rock-bottom, bog-basic. Other than the lights, wipers and fan, everything is mechanical and completely farm-fixable. That scores highly in our books.

The Farmtrac’s overly complex Zanussi-style computer panel plus electrically engaged pto and 4wd make it a veritable Starship Enterprise in comparison. But even when they go wrong they won’t bring everything to a standstill. The key mechanical components can still be fixed with a lump-hammer and a Lion bar.

On paper it’s the Farmtrac that wins – basic spec includes double the number of gears, better tyres, three spool-valves and whole host of other goodies. And it’s £4,000 cheaper than the Zetor. However it’s less tidily screwed together, heavier, less agile and doesn’t have the proven pedigree of the Major.