Here’s a funny thing. I’m standing next to the new Land Rover Freelander and I can’t work out whether it’s a big small car or a small big car.

The old one was definitely a modestly-proportioned piece of kit, but this one looks like a Range Rover that’s slightly shrunk in the wash.

This family resemblance to the RR is a bit spooky. The Freelander has many of the same styling cues, like the side air intakes and the badging, and it sits on very adult 18in wheels.

The book says it’s 18in shorter and 3in narrower, but it sure looks like a Range Rover, especially from the back.

Is it pretty? Well, yes it is. For while the RR can seem bloated and barge-like, the Freelander is as perfectly proportioned and desirable as an SFP cheque that’s just plopped on to the doormat.

Land Rover’s press fleet manager decided to give us the top-of-the-range HSE to try (perhaps they’ve got the wrong idea about the higher wheat prices).

This has a price tag only a little short of £31,000 (no, that’s not a misprint) but you do get almost all of life’s little automotive luxuries this side of an ensuite bathroom with chi-chi mosaic tiling.

Done out in cream leather with tactile matt black dash and door inserts, you can easily imagine yourself as a minor Middle Eastern potentate with a couple of camels and well-stocked harem following behind in a battered Land Cruiser.

A Big, touch-screen sat-nav with two grades of stern female voice, built in phone system that automatically makes friends with the Bluetooth phone in your pocket, electric seats, cruise control, mirrors that automatically fold when you switch off the ignition, you know the sort of thing.

It’s all very well put together, too. You can poke about like a badger in a field of maize and you won’t find anything that’s shoddily made or of doubtful quality.

So if you want to reward yourself for selling five acres for development, but don’t want to give the game away to your neighbours, this is the vehicle for you.

OK, time to fire it up. Not so fast, though. There’s no key and no ignition slot to put it in. Instead your keyring sports a black plastic thingy about the size of a matchbox, though with the tactile qualities of a wine gum that’s found its way into the fridge.

Shove this in the slot, press the button on the dash marked Start and off you go.

It’s novel and fun and no doubt makes the car as hard to break into as a bank manager’s wallet. But it is fiddlier, especially if you’ve got several other keys on the fob. Hey ho, that’s the price of security.

I was looking forward to good things from Land Rover’s latest TD4 2.2 diesel. With 160hp up its sleeve, it should shift faster than a hare courser’s lurcher. Hmm, well, there was both disappointment, but pleasure too.

You see for those of us who grew up in an era when 68hp under the bonnet of your pick-up was enough to get the girls batting their eyelashes, 160hp sounds like something to get really quite excited about.

And, sure, the Freelander pushes itself along without embarrassment or fuss. You can overtake veering Volvos and ambling Audis with confidence, but it won’t set your pulse racing. 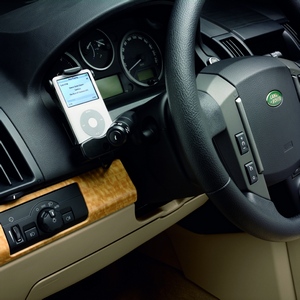 Maybe it’s because there’s a tonne and three quarters of metal, glass and rubber to put in motion but whatever the reason, it’s a car that encourages sensible rather than frantic progress from a standing start.

Go up the gears and speed range and you’ll get a pleasant surprise, though. The diesel clatter drops off, the whistling wind abates to a murmur from around the sunroof and it all goes funeral-parlour quiet.

At 90mph in sixth gear you’ll be pulling just 2500 revs and can talk to your passengers in a whisper. Only problem is, you’ll sail past the speed cameras in silent and serene ignorance.

Most other aspects of the Freelander are pretty well sorted, too. The ride is astonishingly good for a 4×4 – it doesn’t clatter over potholes and there almost no jiggle. Truly, an off-roader for those who don’t like off-roaders.

The rear seats fold down with glorious simplicity so there’s no requirement for the usual degree in engineering and the suppleness of limb of an Olympic gymnast.

The loading height is amazingly high, though – great for heavy toolboxes or plough bits but your arthritic will give you a mournful look when he sees it for the first time.

We didn’t get a chance to test the Freelander off road, but there’s no reason to think it won’t pass muster. As ever, Land Rover lines up more technology than a branch of PC World to save you embarrassing yourself in the brown stuff.

If you’ve driven a Discovery, you’ll recognise the same four-setting dial that allows you to choose between general driving, grass/gravel/snow, mud and ruts. So nothing there to frighten your granny.

This is a great car. It’s solidly made, has lots of kit, and does everything well. It’s astonishingly quiet at speed and has a smoothness of ride that shows up most other off-roaders as the jiggle-boxes that they really are. But it’s not as quick from start as you might expect and the keyless ignition process is fiddly. Oh, and that price-tag will make your eyes water.