The first continuous grain moisture tester that uses microwaves is now on sale. It was developed by Cambridge firm Z-Tech, who were already using microwave moisture sensing on products like aggregates and powders.

They adapted the technology to work with grain and built the first prototype on James Peck’s farm at nearby Dry Drayton. The microwave system can be used wherever there is a continuous flow of grain and accuracy is +/-0.1%. 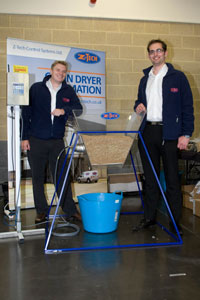 There are three systems on offer.

• The Z-Tech Monitor and alert system can be installed by a farmer, shows the moisture content in a graphical form and sends you a text if the reading goes above or below a set band of acceptable moistures. Cost is £4,995 (DIY installation) and £5,995 installed.

• The Z-Tech MC1has the same features but measures the out-feed moisture content and alters the drier speed automatically. Units are custom made for individual drier makes, so there is no self-fit option.

Text alerts area available and graphical data can be viewed via the Z-Tech website or by using an iPhone app. Cost is from £9,995 installed.

• The Z-Tech MC2 has two sensors fitted on the in-feed and out-feed of your drier, so is suitable for farmers who deal with grain coming in at different moistures from different sources. The same text alert and data services are available as on the MC1. Cost is from £18,995 installed. 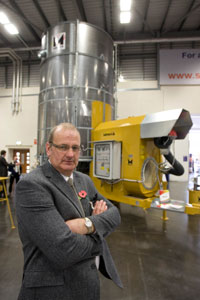 One of the biggest trends in mobile driers has been the move to automated control system that mean they can largely left on their own to get on with the job. However farmers often want to still retain some ability to make changes even when an automatic system is working.

Italian-made Mecmar mobile driers, for instance, now allows users to switch batches in mid cycle. It also has a facility to automatically top up the grain level by a tonne or two when it has dropped as result of shrinkage of the grain as the moisture is taken out.

A third option, also possible even when the machine is in full auto, is to re-employ a burner to give extra heat. 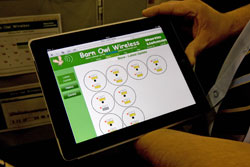 Having a store full of overly hot or damp grain can be an unsettling feeling for any farmer. Constant checking of grain temperatures and moistures is important but it’s a tedious job and most farmers admit they don’t check often enough.

But the latest wireless temperature sensors could help make the job quicker and easier by sending the information direct to the farmer (rather than him having to keep physically checking the store).

Martin Lishman was showing its new Barn Owl Wireless probe system that can be adapted to the size of store. Probes are inserted into the grain every 6m. These take a temperature reading every three hours and send the information by radio signal to the Barn Owl Gateway.

This is then transmitted to the company’s HQ in Bourne, Lincolnshire, via a GPRS (mobile phone data) connection, where it is collated and shown as graphs. The farmer then goes on to his own Barn Owl Wireless web page and can see all the temperature readings for his store.

He can then use that information to manually turn ventilation fans on or off. Equally, he can select one of a number of control programmes to switch the fans on or off remotely. He can also set thresholds that tell the fans to switch themselves on and off automatically – a move that can potentially save a lot of electricity. More than 20 such set-ups are working across the UK, says the company. 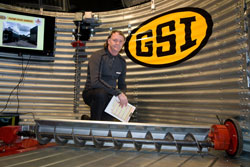 With old-established UK firm Brice Baker going into liquidation a month or so ago, it has meant that the Farm Fans driers (which Brice Baker had brought in for many years) were no longer represented in the UK.

However, Shropshire firm Danagri has now taken on the import of new Farm Fans equipment as well as providing service and back-up for the 350 or so Farm Fans machines already at work in the UK.

It also makes sense for Danagri because the firm already brings in grain bins from US giant GSI. GSI, in turn, bought Farm Fans some seven or eight years ago.

And outdoor silos are still proving a popular alternative to on-floor systems, explains Danagri’s managing director, Mark Unitt. While the vast majority of farmers use on-floor stores in big sheds to store and dry their grain, there’s still a steady following for outdoor bins. This is particularly so in mixed farming areas, where big sheds are often needed for livestock or storing straw.

The firm put in more than 30 silos on farms last year. These can be considerably cheaper than an on-floor store, when the cost of the building for the latter is taken into account.

Comparing costs is always difficult with this type of equipment (getting the corn to and from the drier or store can often be a big financial factor for a start) but the cost/tonne of a drying silo can be between £130 and £160/t compared with £200-225 for an on-floor system .

MASTERFARM MONITORS MOISTURE ON THE HOOF 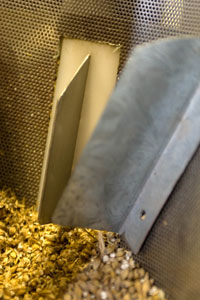 Colchester firm Master Farm used the UK Grain event to show a clever moisture measurement system for its mobile driers. The technology comes from instrument maker RDS, which adapted the existing technology it uses in its combine-based grain moisture sensors.

Grain at the bottom of the hopper passes either side of a small 50mm x 100mm metal fin. A small electrical current passes through those grains that are in direct contact with the fin. The resistance to the current is then detected and turned into a percentage moisture figure.

It’s as accurate as a typical handheld moisture meter, says the firm, and gives a continuous readout of the moisture content of the grain. It also automatically compensates for the temperature of the grain.

It’s available both on MasterFarm driers and other makes and costs £695. 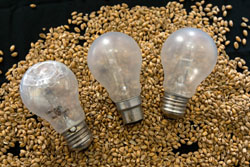 The latest shatterproof bulb from Norfolk firm Glassguard is the halogen GLS. Like other Glassguard bulbs and fluorescent tubes, it is coated with a thin membrane that means that, even if the bulb blows or is physically hit, it retains all the shards within the membrane. That’s essential for farmers who need to meet assurance schemes.