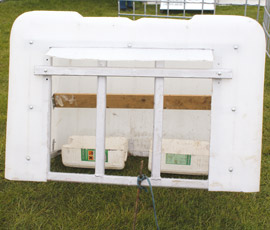 Mechanical know-how, plenty of imagination and a well-equipped workshop are often all you need to turn unwanted bits and pieces into money-saving equipment.

This is the recipe for many of the do-it-yourself equipment ideas from the eastern counties displayed in the annual Inventive Farmer Competition at the Suffolk Show near Ipswich.

IBCs arrive on the Allan family’s Kings Farm, Langwood Fen, Chatteris filled with manganese applied as a trace element on the farm’s peaty soil. The containers are large and sturdy but non-returnable, so Stuart decided to convert some of them into equipment for the 40 breeding ewes grazing river banks on his mainly arable farm.

His winning entry in the ‘gadgets’ section of the competition included hurdles made from the steel mesh outer framework of the IBC. The framework is high-tensile steel, which means the hurdles are strong but also light and easy to move, he says. Removing the base of a cube-shaped plastic container and cutting two access holes at the side produces a creep feeder for young lambs and also doubles as a shelter that was popular in the recent wet weather.

The third item in Stuart Allan’s winning entry was a square water trough made from the bottom section of an IBC, with added supports to keep the sides rigid. The troughs are shallow, making it easy for the youngest lambs to escape if they fall in.

The only new item bought for the rape seeding attachment Andrew Gaught made to work with his five-leg subsoiler was a can of paint to make it look like new. All the other parts on his second-prize winning entry came from obsolete machines on his farm. The seeder’s rubber-tyred press wheels and axles plus the drive to the metering unit came from old Catchpole beet harvesters. The disused Massey Ferguson seed drill contributed the metering unit and an abandoned Stanhay beet drill provided the main frame, mounting brackets and metering wheel. The seed hoppers are re-used plastic chemical containers.

Andrew uses the seeding attachment with a five-leg Quivogne subsoiler on Manor Farm, Ashbocking, Ipswich. The Quivogne subsoiler is ideal, he says, because the low disturbance tine design minimises soil movement at the surface and crops sown with the rapeseed attachment have performed well.

A heavy compacting roller designed for a power harrow forms the basis for a pasture renovator that was among the runners-up in the competition. Daniel Cracknell of Pound Farm, Brettenham, Stowmarket cut the drum to the required 2.4m working width, attached aerating blades with 150mm maximum working depth around the surface, fitted it into a linkage-mounted frame and added a set of spring tines from an old hay tedder to act as a scarifying unit at the rear. The unit weighs 550kg, but two 200-litre drums mounted on the frame can be ballasted with water for improved penetration in hard ground.

Recycling outdated equipment was not the approach used by Suffolk farmer Nigel Rolph for his entry that won second prize in the gadgets class. He developed a high-tech monitoring system that sends a mobile phone text message if there are problems with an irrigation system, and the message also identifies the nature of the problem.

Farming in one of the driest areas of the country, Mr Rolph uses irrigation equipment for potatoes, sugar beet and other crops on Grove Farm, Ufford, Woodbridge and on additional land he farms six miles away. Irrigating the outlying land was the main problem as breakdowns could waste water and travelling to and fro to check the equipment was time and fuel-consuming.

Helped by someone with specialised technical know-how, Mr Rolph adapted the automatic texting unit from a burglar alarm to link with his irrigation equipment control panel. The result is instant text messaging to up to 10 mobile phones, warning of problems and indicating the causes and also advising when the pump has switched itself off correctly after completing a pre-programmed work cycle.

Want to read about more farm inventions? See the winners of the Farmers Weekly 2012 inventions competition